This is the latest in a series of protests that have been held in the past few months across the country where women students have marched in solidarity challenging the patriarchy entrenched in hostel administrations. 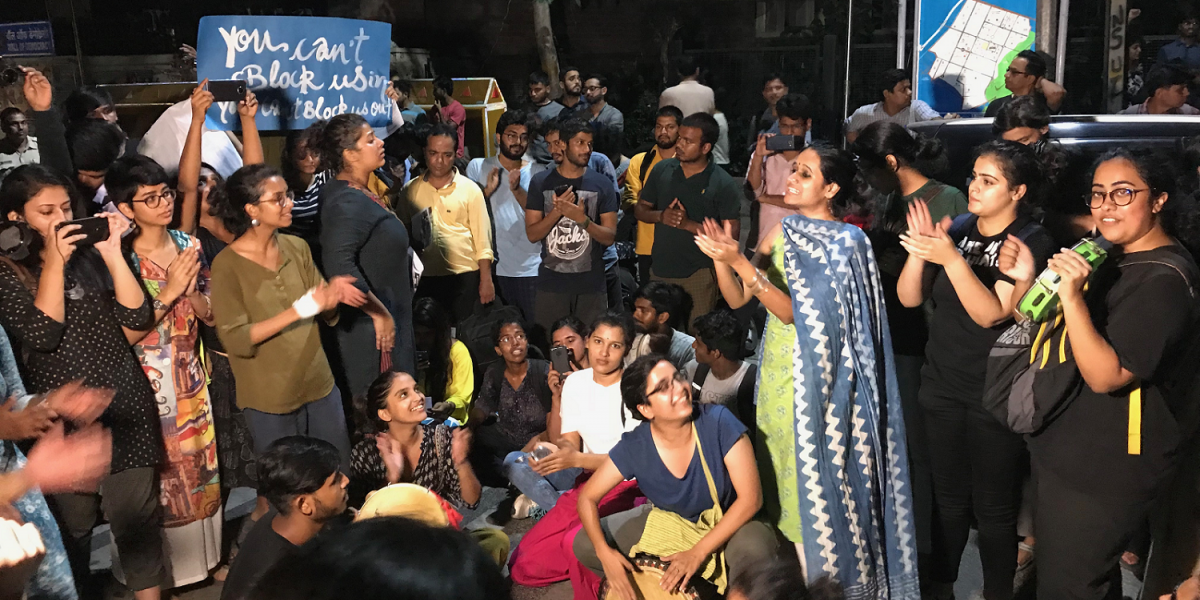 New Delhi: With women students of Delhi University blocking the roads, the north campus’ Mall Road was filled with cries of azadi on Monday night. A night-long protest against curfew timings was led by Pinjratod, a student activist group, which had also called for an indefinite protest against the university’s regressive and discriminatory hostel practices. It was a ‘times up’ moment for the women students who have repeatedly attempted to tackle the curfew issue in the past couple of years.

As the protest began in arts faculty, the police and security personnel immediately locked the main gate of the University Enclave. After almost two hours of sloganeering, the proctor came to meet the protestors. The students demanded that the university open its gates so that talks could be held inside. The proctor however refused to comply. Impassively listening to the students, she told them that an unspecified committee was looking into their grievances. The students attempted to prevent her from leaving by forming a human chain and were manhandled by the police.

The protestors then marched to Mall Road and mounted a blockade, asking the proctor to concede to their demands. As tensions escalated, the police started to manhandle the agitating students. Male policemen attacked and abused women students. “Three policewomen grabbed my arms and waist and threw me to the ground, then spat the word ‘whore’ in my face,” Adreeta Chakraborty, a student of St. Stephens said. The proctor was forced to make another appearance and seek time from students to complete the ‘due process’.

The students are planning to resume the protest in case the administration does not take any follow up action. Further, the hostel spaces are rampant with sexism, shaming, moral policing and inaccessibility. In most colleges, hostels are awarded on the basis of merit and not need, restricting access, especially for transgender, differently abled and lower caste students. Due to excessive surveillance and ‘security’, women’s hostels have also become extremely expensive, blocking access for a significant chunk of students.

The students are planning to resume the protest in case the administration does not take any follow up action.

The demands put forth in this protest, just like those in the past, are basic in nature. In addition to the abolition of curfew, the students are asking for separate hostels for differently abled students. They have to travel significant distances everyday because DU does not have infrastructure to make the campus accessible to disabled students. The students are also demanding 24/7 access to college libraries and toilets, safe drinking water and strict implementation of reservations for SC, ST, OBC and PwD students in all women’s hostels. Interestingly, aside from SFI, no other student political party, including the ABVP which recently won the DUSU elections, extended solidarity or participated in the protest.

A series of protests have been held in the past few months across the country, where women students have marched in solidarity, challenging the patriarchy entrenched in hostel administrations. The rallying cry of azadi and pinjratod have created a universal solidarity for women students.

The protests began in Jamia Millia Islamia in March and were followed by those in Patiala, Benaras, Kottayam, Bhubaneshwar, Ajmer, Kurukshetra, Allahabad and Raipur. The organisers say they have one clear objective: to stop patriarchal institutions from infantilising and restraining women from accessing university spaces, regardless of the time.

Rachel John is an intern with The Wire.