Launched on the third death anniversary of Gauri Lankesh, the 'If We Do Not Rise' campaign saw the participation of 632 women’s and other rights groups. 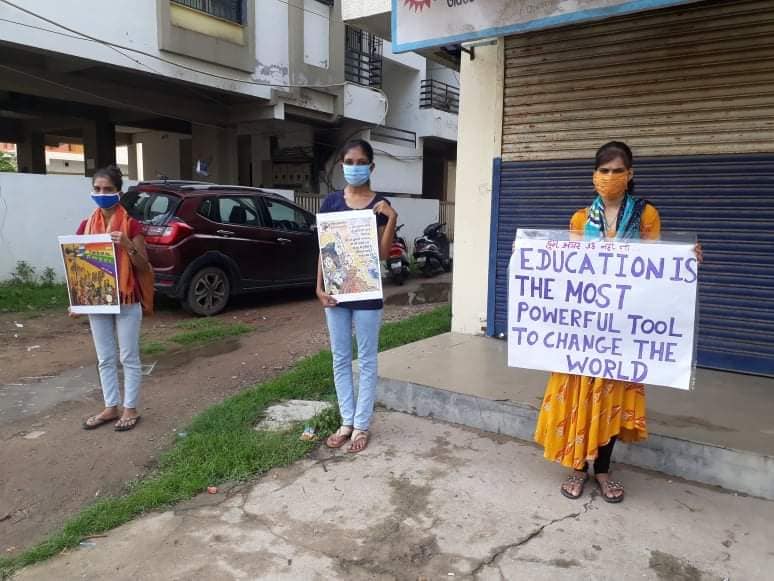 Women pose with posters for the campaign. Photo: Facebook/IfWeDoNotRise

New Delhi: Around 15 lakh people actively participated through social media in the Hum Agar Utthe Nahin Toh…  (If We Do Not Rise) campaign that was launched by various women’s groups, members of the LGBTQIA community and human rights organisation on September 5, the third death anniversary of journalist Gauri Lankesh. The event sought to highlight the suffering of the masses during the COVID-19 pandemic and seek greater accountability from the government.

At a press conference on September 15, the organisers of the campaign spoke about its progress and presented a charter of their demands that seek to ameliorate the sufferings of the masses. They also accused the Centre and the states of trying to put a lid on the plight of the people and urged greater transparency to ensure that the schemes announced for the poor and distressed reach them effectively.

Highlighting the need for the campaign, Anjali Bhardwaj of Satark Nagrik Sangathan said it was felt that there was a need to “speak out against inequality, injustice and oppression.”

She charged that there has been an “unprecedented attack” on the constitutional rights and the democratic rights of the people in the recent past. “There is a huge problem with the economy, the GDP is witnessing a 24% contraction, unemployment is at an all-time high and after demonetisation and missteps like the introduction of Goods and Services Tax, we had an ill-planned lockdown which totally threw the economy into doldrums,” she said.

In such a scenario, she said, “The working poor, the farmers, the working class in general, sex workers are suffering because of the way the economy has been handled – there is widespread destitution, hunger and starvation.”

Also Read: No Data, No Problem: Centre in Denial about Migrant Worker Deaths and Distress

Rather than work towards addressing these issues, she said: “The government is using lockdown to curb dissent. After bringing in the Citizenship Amendment Act (CAA) and diluting Article 370, the Centre has shown that it has no intention to be answerable or accountable to the people of the country.”

She said laws like the Transgender Persons (Protection of Rights) Act will adversely impact the rights of transpersons.

Bhardwaj said, “We are now seeing an attack on all those who raise their voice and question. We are also seeing an attack on all institutions of oversight which can hold the government answerable and all instruments that empower people.” She said the campaign has demanded that RTI laws should be strengthened, electoral bonds that allow the ruling party to get enormous amounts of money should be done away with and there should be an end to attacks on people who question the government.

‘Whoever raises questions is labelled anti-national’

Prominent social activist Shabnam Hashmi said the campaign was organised when it was felt that ‘a siege was being laid around us’. “We wanted to come out of that atmosphere of fear and helplessness. Also right now the atmosphere is such that anyone who raises question is labelled an anti-national,” she said.

She said within a month the campaign grew across India and over 632 women’s organisations in 28 states participated. “This is a first-of-its-kind campaign where people from all strata of society participated. People were asked to make videos and do Facebook live programmes. We managed to reach out to around 15 lakh people through social media participation.”

Hashmi termed the campaign “a celebration of opposition” and insisted that “it has posed a major challenge to the authoritarian forces in power.”

Women pose with posters for the campaign. Photo: Facebook/IfWeDoNotRise

‘Women vulnerable to losing jobs in absence of support’

Annie Raja of the National Federation of Indian Women said her group organised 1,427 physical programmes involving 10-20 women each across the country on September 5. She said while the events went live on Facebook, the videos were also shared. A number of memorandums were also submitted to various authorities as a part of the programme.

She said there have been reports of deaths due to hunger during the COVID-19 lockdown from various states but the Centre and state governments were not willing to acknowledge these. “In the days to come, we fear, that due to the lockdown the livelihoods have been impacted and in the absence of support from the government a very large number of women workers will become vulnerable to losing their employment.”

The governments, she said, have announced various measures but imposed pre-conditions relating to ration and Aadhaar cards due to which a large number of people have been denied their benefits.

She demanded that food security schemes should be continued until all impacted families regain their source of livelihood. She also demanded the collection of gender-based data to ensure the schemes reach their intended targets.

Activist Kavita Krishnan said while ideally a democracy is marked by the presence of constraints on abuse of power and offers protection to the weak, in India this appears to have been overturned. “The police in India, instead of relying on investigation, rely on torture,” she charged, adding that she would like to seek accountability of those who are in power.

Krishnan also spoke about issues related to women and transgenders lodged in prisons and urged that they be released in view of the pandemic.

The campaign also released a Charter of Demands that covered 13 thematic areas and 20 fact sheets on various topics.