We Are Seeing, for the First Time, a Sustained Countrywide Movement Led by Women

No group stands to lose as much as women do if the CAA-NRC are implemented. The Indian woman knows that, and knowledge guides her in the protests. 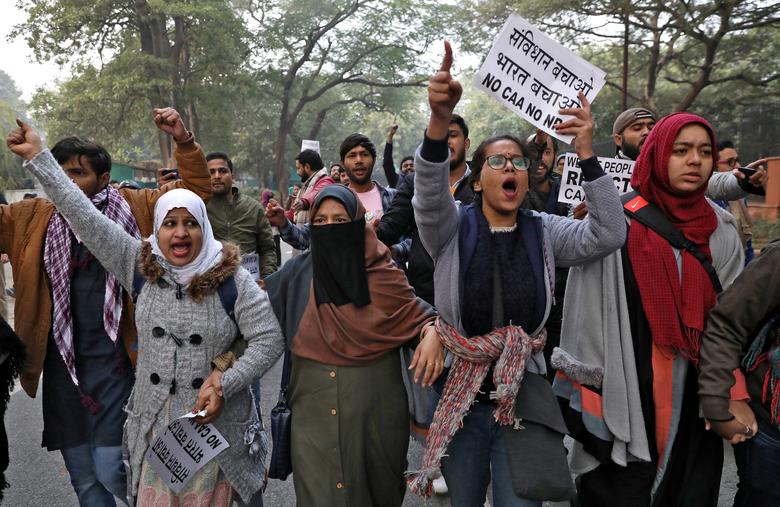 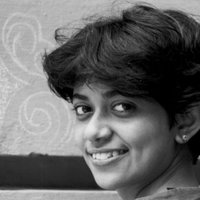 The independent nation has never seen such a sustained political agitation led by young women – vociferously, unfailingly and determinedly. Who are these protesting, shouting and uproarious young women? Are they just students from India’s liberal campuses? Or are they instigated by opponent parties? Is their participation an accident or is there a method in this upheaval?

It is neither an accident, nor an instigation. There is a clear and single-minded shift.

Female students in university campuses across India are out to show that the future of politics is shifting rapidly; that 21st century politics is not going to be handled by the rhetoric of masculinity anymore; that the time has come to deal in politics with care and concern for gender discourses rather than making that occasional call for for the blood of the rapist. 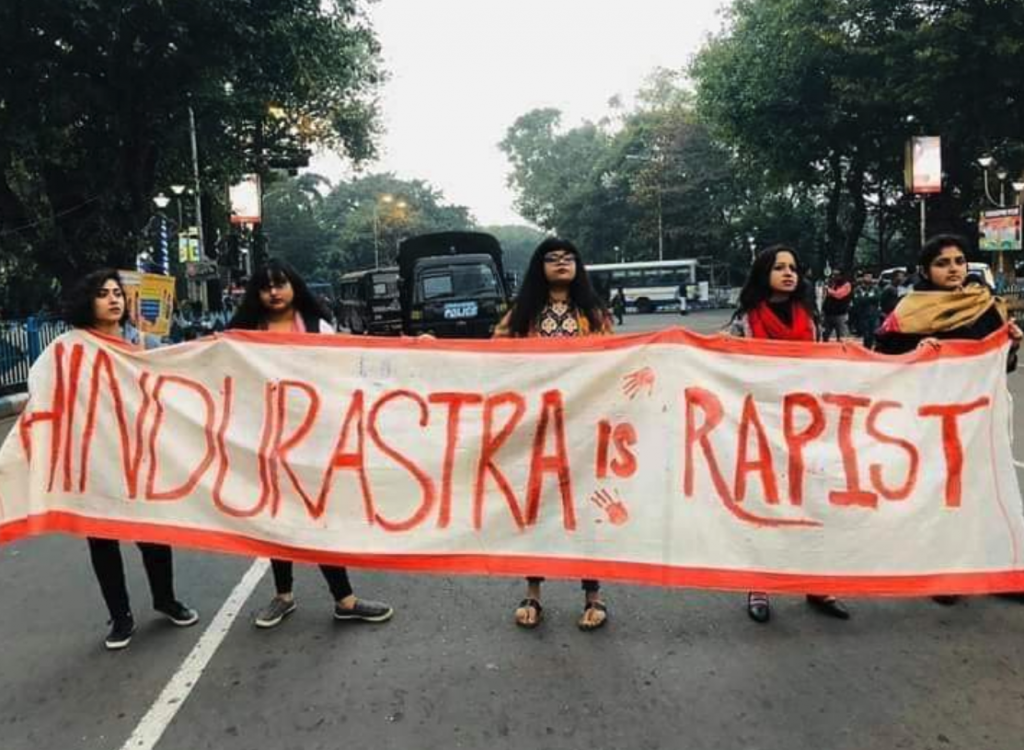 The increasing number of vocal girls is saying that gender-justice is not alms, but a systemic intervention into the nature and logic of politics itself.

This is the broad picture generally but there are more nuanced reasons why women are willing to bet themselves at the altar of restive, bloody street politics.

First, the Citizenship Amendment Act (CAA) threatens women in a larger way than men. Images and reports of detention camps in Assam have given demonstration to that effect. And women – not only from minorities, but across sections – have started to feel the fear of being disenfranchised.

This is a real fear, because suffrage is a key issue for a nation with a colonial past. In a nation like India, where the process of decolonisation is hardly over, the national identity of women emerged out of the construction of history of its struggles against the colonial (and also post-colonial) government. And hence, the threat to lose the right to vote or to get the citizenship nullified makes a deep impact.

It is a matter of survival for women in higher studies, who know what it has taken them to have finally found a voice. Therefore, they are are much more keen to resist the law, considering it as one that forecloses a fundamental aspect of gender justice.

Second, the fear of adequate documents. In India, women, across various socio-economic markers are often deprived of state papers. Since 1990s, the government’s concern for prenatal and postnatal care in rural areas meant that many were birthed by midwives, complicating birth certification prospects; the rate of marriage registration is still arbitrary; women often do not possess immovable property under their name; and stay at the ‘care’ of father or husband after marriage.

Thus, the implementation of CAA and National Register of Citizenship (NRC) are introducing a new order, a new ‘definition of margin’ and a new hegemony, which is posing a grave threat to women across communities, caste and class.

And the increasing rural literacy and urban mobility among women are not hiding these dangers anymore from them. These young women are often first generation learners or the first generation in higher studies in their family. For them, being pushed to a state of lack of agency, which they have seen in their mothers or grandmothers is not an option anymore.

Hence, anything that threatens the possibility of their aspiration and mobility is making them participate resolutely in protesting against a discriminatory law.

Literacy, is in fact, another reason in itself for increased participation of women. The substantive increase of female students in higher education means that girls are now travelling more, staying in hostels and participatory renting, making them independent and in control of their lives. This detachment from family and increased ownership of the self gives courage to speak up, to stand up and to raise voices; even against the state. 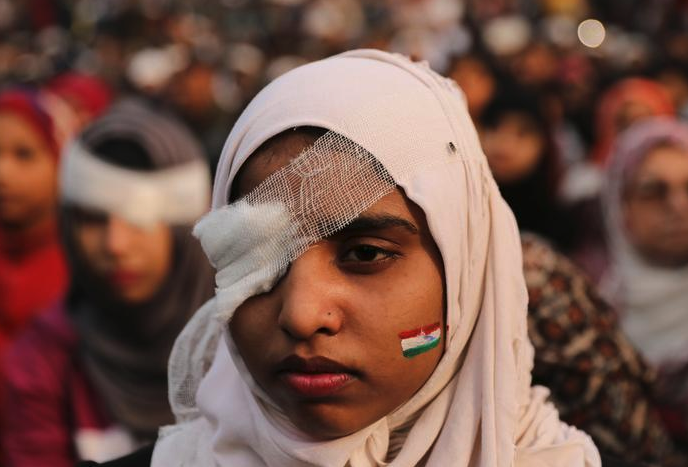 A demonstrator has her eye covered with a patch during a protest to show solidarity with the Jamia Millia Islamia university student who allegedly lost his eye during protests against new citizenship law, in New Delhi, India, December 29, 2019. Photo: Reuters/Anushree Fadnavis

This ability is now further enhanced by harnessing of technology. A faster digital world is changing the way younger generations of women connect to the world, often adapting technology at a rate faster than men.

Adoption of smart-phones and participation in social media-led collectivising is crucial in recognising an increased sense of liberty and a broader role in public voice and space. The digitisation of space is hence a formidable prospect in the mobilisation of student-led politics.

Women are not willing to give it away in the name of flimsy papers and perverse dictations of to citizenship. Also, there is an increasing appetite in the younger users for information and data, which is being denied by this government repeatedly, making the younger wary of their future and well-being.

Finally, one can end with a retrospective reason for the swelling of women among protesters. This reason might look innocuous from the distance of time; but it is not. If one looks back carefully, one would note that the expansion of the noon-time meal in upper primary schools started during the first term of UPA government in 2004. The idea was to attract children to schools, to reduce drop-out rates and to give nutritional supplements to girls.

In following years, the mid-day meal scheme became a raging success, cutting both absenteeism and gender imbalance in schools. Girls from poor families who were thus incentivised to attend school are now in the age group of 18-25 years.

They are the ones who have benefited from spread of education and know the ethical imperatives of free public education and learning without hindrance of having to prove birth-data. 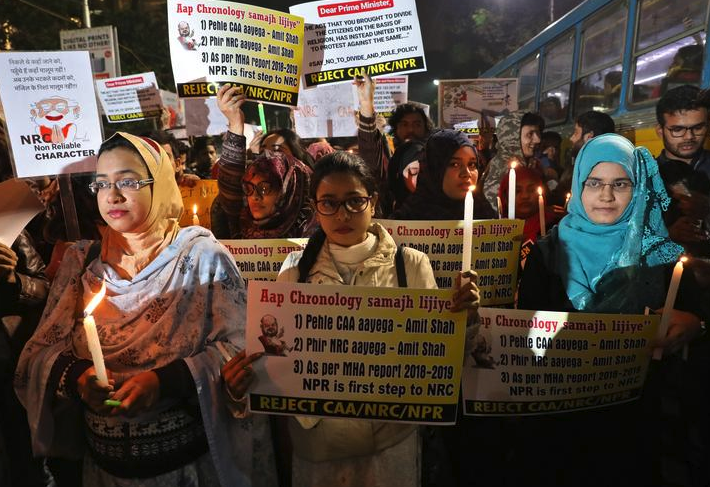 Demonstrators shout slogans during a protest against the new citizenship law, in Kolkata. Photo: Reuters

So, under these circumstance, if she gets to know that a law like the CAA is about to disenfranchise her or her mother, or both; or if she knows that because of her birth lineage she is going to be sent in detention camps; or be denied rights of a citizen; or if she fears to lose her degrees and enfranchisement by random and mindless gate-keeping, what will she do?

She is doing what she should, marching bravely as vanguards in protests across the country.