The Writing's on the Wall: Boys Need to Be Better

If rape culture begins at home, then it must be rectified at home. The latest Instagram chatroom is proof of that. 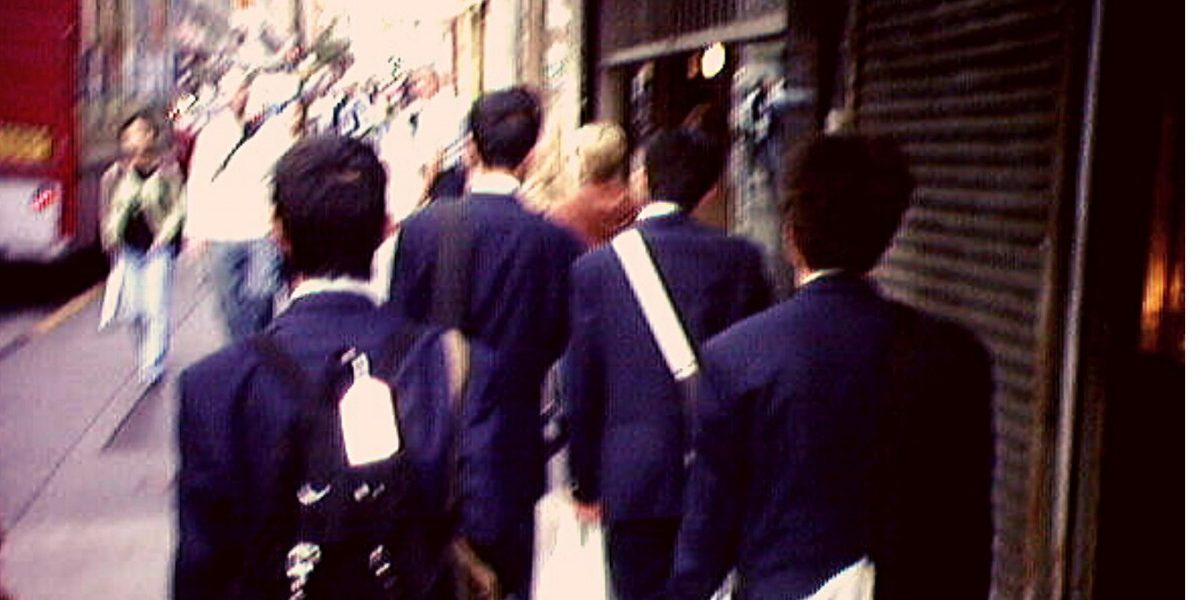 In high school a caricature of my body with large silicone implants suggesting my recent breast development began circulating in the school halls.

Breasts were as new to me as they were to the boys who drew them. The intrigue with the word breast was enough for one of them to come up to me and ask whether I had breast cancer. He achieved pride in his locker room for using the word ‘breast’ and I achieved a new sense of shame.

Sometimes receiving attention is the worst, being visible is scary and you develop tactics to be invisible – wearing large clothes, wrapping your dupatta around in a way that it reaches your stomach, covering your entire torso, wearing necklines that would suffocate you.

And all of this is so invisible to so many people we know and live with because the ‘locker room’ chats are inconsequential to many of us, or that’s what we would like to think.

I called up a friend, and cried. It hit home, all of it. But I didn’t know what I wanted to write or talk about.

It was overwhelming. All I knew was that rape culture cannot be spoken of in a vacuum, as solely existing in our workplaces or belonging to our environment alone.

And that follows us to our offices and workplaces. I wasn’t strong enough to talk about it then, for many reasons, some being I did not want to upset them, the people who did this to me. I wouldn’t know the reasons why I stayed silent, but I did.

I thought to myself:

“It was a school thing, it’s fine, it keeps happening. It’s not a big deal. Why create a ruckus out of something that used to happen 10 years ago?”

Fast forward to 2020, as I sat and looked at the infamous conversation about the group chat on Instagram, I realised that those instances were something that I have seen or someone around me has already experienced, the only difference was the fact that technology as a medium of abuse was now part of the conversation.

Of course, that was the point when all those memories and repressed emotions came back  home to roost. To begin conversation around rape culture is no longer like opening a can of worms. It is in front of us, in the open and the best part is, it is not scary anymore, it is pathetic.

As far as I know, some girls exposed an Instagram group chat where a bunch of kids from posh South Delhi schools were objectifying minor girls and allegedly talked of raping one of them on a separate chatroom, which has not been verified as of yet.

I read how the girls who busted these people are now getting threats, are now being told by their parents to block people, deactivate their accounts. Taunts like “Yahi to hoga jab zyada social media pe ladkiyan rahengi” will be nastily thrown at them by relatives. ‘This is what will happen if girls are always on social media.’

The point here is, this isn’t new. This is not something that started with the advent of social media, or apps like Twitter, or  Instagram. This is the latest iteration of an ever present, evil, rapidly growing rape culture which has been in existence since time immemorial.

At one point, it was pen and paper, woven in little boys’ fantasies on paper. A few decades later, it was mobile SMSs and comic strips. One more decade later, it is photoshopping compromised pictures of women and openly talking about harassing and raping them, and slut-shaming them.

Every girl who was given unwanted smirks in schools, from that uncle, from that neighbour or random passerby or even a peer will tell you how this was or is  still a part of her daily routine that she has learnt to accept. Only the medium is new.

Only that now people can probably visualise and fantasise from the privacy of their homes. But only now can people call out these acts better. So blaming women was never the defence to begin with, and blaming social media is not a valid argument to end this with. Social media and the internet has only made it impossible for you to ignore the problem, not cause it.

After going through 2-3 screenshots of the chat (because I couldn’t read further), I got a news notification about Safoora Zargar and how she is being shamed on social media for the fact that she is pregnant and is unmarried, which is fake news, to begin with. 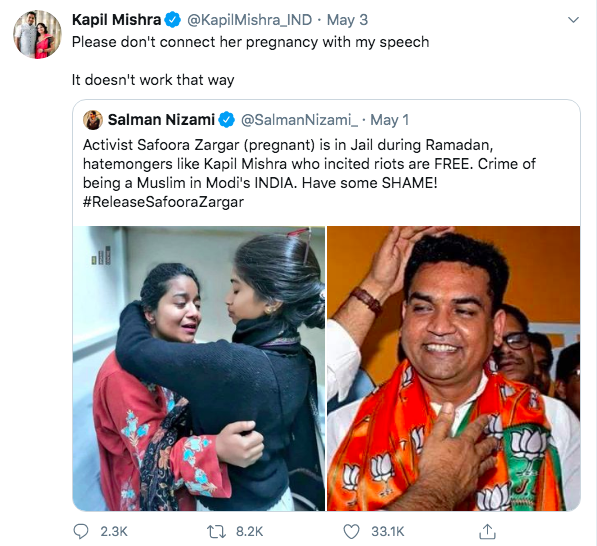 BJP leader Kapil Mishra, meanwhile, quote-tweeted the above tweet by a Congress member. And since then, Safoora has been slut-shamed left and right, so much so that her husband had to show their wedding photographs as proof of their ‘legitimate’ child.

AltNews had to come out with a ‘fact-check’ to dismantle the fake news of her child being born out of wedlock. It is a mark of how disgusting our ways of treating women have become that one of the best fact-checkers in the country has to check if an activist is married or not.

How shamelessly Goofaputr trolling Safoora as unmarried woman and assassinating her character. Abusing & dehumanizing a mother reflects their upbringing and the respect towards their own mother. #SafooraZargar#सफुरा_जरगर_का_बेटा pic.twitter.com/Ih7WT5Iohv

What happened with Zargar is the tip of the filth of a society thriving on shaming women for standing up, and sometimes, for just existing. The fact that Safoora’s trolls think that they could bring her down by shaming her for the fact that she was pregnant without a marriage says how rape culture thrives.

That her respect lies in her body is what rape culture all about.

Coming back to the root-cause, I see some people defending this Instagram conversation by saying, ‘Boys speak like this only. But they’re not doing this to anyone. They’re just talking.’

This implies that conversations that are demeaning bodies, representing body parts of people as topics of fantasy in a casual chat among large groups of adolescents, are not crossing any boundaries.

The problem is not the conversation, the problem is that there is no vocabulary to talk about bodies and whatever vocabulary we have, it degrades bodies as something people should feel filthy about discussing, vocabulary that doesn’t know the difference between appreciating a body and insulting a body.

Since sex has never been the topic of a dinner table discussion, we do not have a language of acknowledging or appreciating it, let alone appreciating bodies or knowing about consent and boundaries. We have never taught our boys that having sex is not an achievement to be boasted about in front of your peers, that sex is a normal thing and can be talked about, that sex is not an indicator of your masculinity and circulating pictures without the person’s consent is unethical.

Maybe that’s why a group of adolescents felt that showing off someone’s private pictures made them some kind of alpha male who was worthy of leading the pack. This is not the wolf pack we as a society need.

They say, ‘Even girls are a part of this group.’ But no one said women cannot be enablers of the patriarchy and the harassment it perpetuates. People are fighting to justify this behaviour using whatever emotional and mental gymnastics possible, in an attempt to distract and derail the conversation or render it a trivial mishap.

This whataboutery and vocal athletics is not going to help anyone and has absolutely no place in the engagement process.

After thinking about it for hours, all I am able to say is that the only solution to this rape culture is to talk and educate, remove the stigma attached to bodies, sex and human desire, bodily anatomy and autonomy in general. Have a conversation.

While we were being introduced to the Panipat War, the tectonic plates and the mitochondria in our cells, there should have been a chapter that introduced us to safe sex, consent and talked about body objectification, that teachers who asked little girls to ‘dress’ appropriately in school also told boys to keep it in their pants because she is not asking for it. That girls who didn’t like that male teacher’s touch must be bold enough to talk about it with their parents, peers and the principal.

Rape culture begins from what we see around us, from a grandmother saying it’s okay to show a woman her place violently because she has a sharp tongue.

If that’s what our boys see and learn at our homes, a woman’s body is merely a source of their fulfilment. If your brother slut-shames a girl because she rejected him, or even worse, left him for someone else, ask him to stop there and talk to him about his rage and anger, and where exactly is it coming from.

Boys enforce their solidarity with a faux honour code, a ‘bro-code’, while attempts of girls to stick up for each other by way of an unspoken ‘sister-code’ is often laughed at while being described with adjectives that attribute to it an element of gossip.

The very female teachers who are the protagonists of a dirty comic strips in boys’ notebooks are the first ones to ‘show female students their place when needed’.

If rape culture begins at home, the solution shouldn’t be away from home. Don’t let boys be boys. Teach them to be better.