In an interview with The Wire, the Meghalaya governor – whose term ends later this month – says he wants to lead farmers in their fight to ensure MSP is a right. 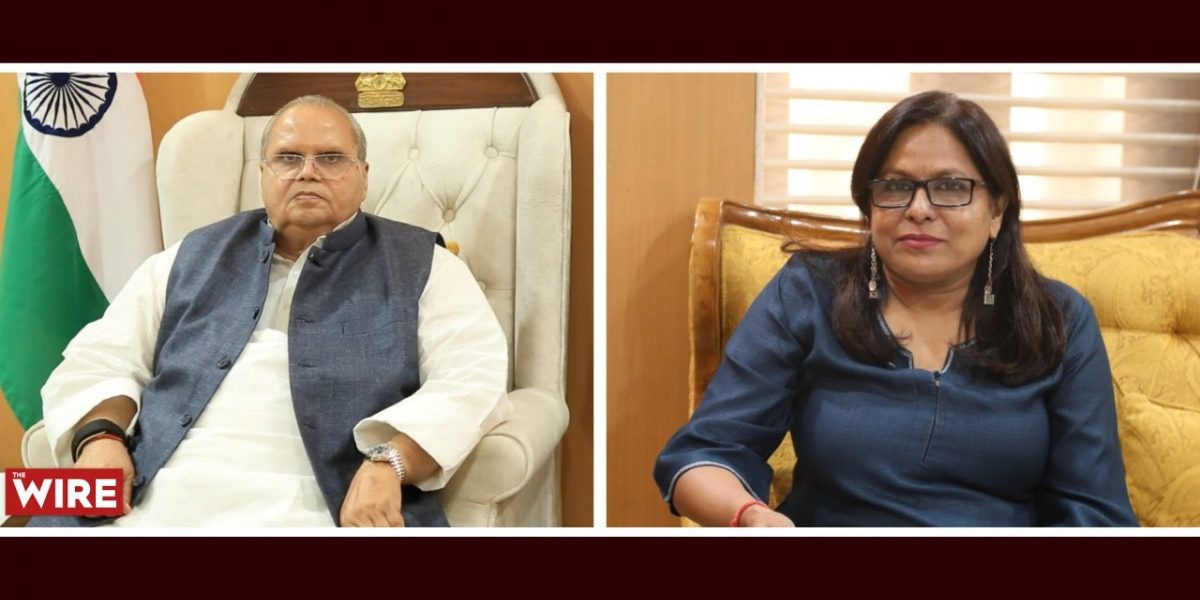 In a free-wheeling interview with The Wire, Satya Pal Malik, the Meghalaya governor whose term comes to an end this month, spoke about his criticism of the Narendra Modi government, his support for farmers and his plans after the governorship ends.

On the fact that he continues to remain a strident critic of Modi, Malik said the prime minister doesn’t tolerate criticism of any kind and is quick to sideline critics like Nitin Gadkari. “Gadkari enjoys enormous goodwill across the country and when he speaks, people listen. He has done a great job in making roads and doesn’t differentiate against opposition-ruled states.”

Malik was upset that Modi did not appreciate his handling of affairs in Jammu and Kashmir after the dilution of Article 370. “Modi has never ever appreciated anyone. It’s not in his nature. In fact, I am governor thanks to Amit Shah. It was he who made me governor. PM has never given anyone a free hand, not even Amit Shah. If he does, he (Shah) can do wonders. He is a practical man and knows how to resolve problems,” Malik said.

Recounting the inauguration of the Statue of Unity, Malik said Modi had given clear instructions that no one will accompany him from the chopper to the statue and that he alone should be seen on camera. “Amit Shah and the Gujarat chief minister could have been asked to accompany him. Unka to hak banta hai.”

Asked if Modi is a megalomaniac, Malik said, “Lagta toh hai. Yeh ek bimari hai. (It does seem so. It is a sickness.) Rajnath (Singh, the defence minister) got a tunnel made. Modi was walking all alone and waving to an empty tunnel. There was no crowd. He could have taken Rajnath along but he didn’t. I kept looking for him and found him much later standing with the rest.”

Asked what was the defence minister’s reaction, Malik laughed. “He is without reaction. He has to remain in politics,” he said.

Asked what should the role of a governor be in the current context of horsetrading and the fact that the BJP has been bringing down elected governments in this manner, Malik said, “I will tell you what happened when I dissolved the Jammu and Kashmir assembly. Sajjad Lone who was the prime minister’s blue-eyed boy came to me. I asked him, ‘How many MLAs do you have?’ He said, ‘I have six but if you administer the oath of office to me, I will be able to prove my majority within a week.’ I refused. I said the Supreme Court will skin me alive. I told (Arun) Jaitley that if Mehbooba gives me a letter, then I will be left with no option but to call her. Had that happened, a government led by the minority community would have been formed and people from Jammu would not have been able to cross the Jawahar tunnel. Jaitley spoke to the prime minister. After that, I asked the PM. He gave me no clear-cut instructions. I did what I thought best and refused to allow horse trading.”

Malik said politics had some idealism in the past. “That got reduced to a career, to a business and now it is unrecognisable,” he said.

He said it wouldn’t be fair to compare Indira Gandhi with Modi. “But I will tell you why Indira Gandhi called for elections after the Emergency. This was a story told to me over dinner in London by Sir Swaraj Paul. He said Indira was very upset that the western media was calling ‘Nehru’s daughter a dictator’. It pricked her conscience and she wanted to give legitimacy to her government. “

Malik remained silent on whether a parallel could be drawn with the current government since an Emergency had not been officially called.

Malik ruled out floating a political party or even joining active electoral politics once his tenure ends in the next two weeks. He, however, did not rule out “aligning” with a political party or a candidate but that’s something he will decide closer to the elections. Malik said he was not seeking another term as governor and “nor is it in [the Modi government’s] interest to give me a second term”.

Malik said the Jat community believes that he would have been the best choice for vice president – as opposed to another Jat leader and former West Bengal governor Jagdeep Dhankar. “After Charan Singh, there is Satya Pal Malik is what people say,” he claimed.

But he didn’t expect to be made VP, he said, as he would have been unable to raise his voice in favour of farmers, had he been appointed. He however clarified that offers that he would be made VP if he stopped criticising the government were made by “well-informed and well-meaning” people and not necessarily those directly at the top.

In response to questions that elections to the Rajasthan assembly are around the corner and the BJP feels that he can influence votes in Jat-dominated areas in Rajashtan, Haryana and Western UP, Malik said he has been attending at least six meetings a month and drumming up support for farmers and their grievances, including a guarantee on the minimum support price (MSP) which the government has promised. He said very soon, farmers will take to the streets once more and “erupt in anger”.

Already several states are witnessing this, he said. As a farmers’ leader, Malik said he would give them direction and help, though not necessarily lead them from the front. “If they get direction, they will fight.” On the fact that there are already farmer leaders like Rakesh Tikait who are guiding the farmers, Malik said when the farmers hit the streets once again, “There are unions in Punjab and Haryana and a leader would emerge from there to lead.”

Note: A longer description was added to this video after publication.