Watch | 'I Think Supreme Court Will Read Down Law of Contempt': Harish Salve

In an interview, the former attorney general spoke at length about the law of contempt with specific reference to two cases the top court is hearing – that of the comedian Kunal Kamra and the cartoonist Rachita Taneja. 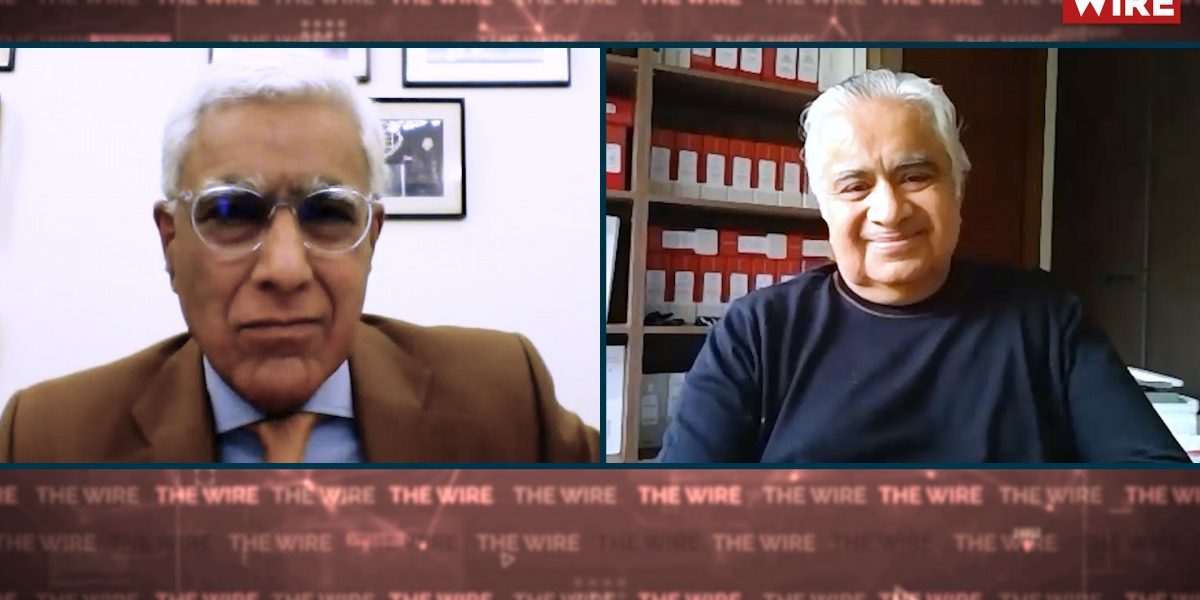 New Delhi: One of India’s most highly regarded Supreme Court lawyers, who is also a prestigious Queen’s Counsel in Britain, says he believes the Supreme Court will read down the law of contempt and at the same time added that judges must not play to the gallery, which some do, but remember that their court is supreme not because it is infallible but because it is final.

He was speaking on Saturday from his home in London to Karan Thapar for The Wire.

However, despite repeated questioning, Salve refused to say whether the court ‘should’ read down the contempt law. He also added that this was not the right time for the government to legislate to abolish the law of contempt.

In the interview, Salve, who is also a former solicitor general, spoke at length about the law of contempt with specific reference to two cases the Supreme Court is hearing – that of the comedian Kunal Kamra and of the cartoonist Rachita Taneja. In both cases, Salve said he had no doubt that the content was contemptuous but forcefully argued that action should not be taken against either person and judges should simply “take it on the chin and move on”.

However, Salve told The Wire in no uncertain terms that he would not act on these tweets. As he put it: “Would I have taken notice? No. Who is this gentleman? What is his credibility? Who makes the contempt does matter.”

Speaking about Kamra’s defence – made in an affidavit to the Supreme Court, where Kamra said “judicial offices know no protection from jokes” and “jokes are not reality and don’t claim to be” – Salve said, “I see no humour in his tweets.” However, he agreed with another part of Kamra’s defence that the Supreme Court should trust the public not to form its opinion on the basis of a few jokes on Twitter.

Speaking to The Wire about Taneja’s cartoons, which are about the Supreme Court’s handling of the Arnab Goswami case and one of which carries the caption “the Sanghi Court of India”, Salve said “these are definitely contemptuous”. He said they accuse the Supreme Court of “dishonourable behaviour” and “leaning in favour of the ruling party”. He said Taneja’s cartoons are “the most gross form of contempt – that the Supreme Court has lost its purpose of existence and is acting in favour of the government”. He said the cartoons are “the most damning indictment” of the court.

However, commenting on the attorney general’s view of both Kamra and Taneja, Salve said he agrees with the content of what the AG said of Kamra though he would have used less strong language. The attorney general called Kamra’s tweets “gross insinuation against the entirety of the Supreme Court”.

Of Taneja’s cartoons, the AG had said they were an attempt “to denigrate the Supreme Court and lower its authority in the eyes of the public”. This time Salve suggested his comments would have been stronger. He said “her conduct is disgraceful”. He added it “doesn’t even pretend to be humour”.

However, once again, Salve made it clear that he would not act against Taneja.

Salve told The Wire that in prosecuting for contempt, two separate issues need to be considered. Do these people matter? In the case of Kamra and Taneja, his answer is they do not. Secondly, what impact has their comment or cartoon had? Again, he said, very little if any at all. For both these reasons, he would not act against them, even though what they had said or drawn was contemptuous.