In a 30-minute interview with Karan Thapar for The Wire, the National Conference leader said the killings of civilians belie government claims of 'normalcy'. 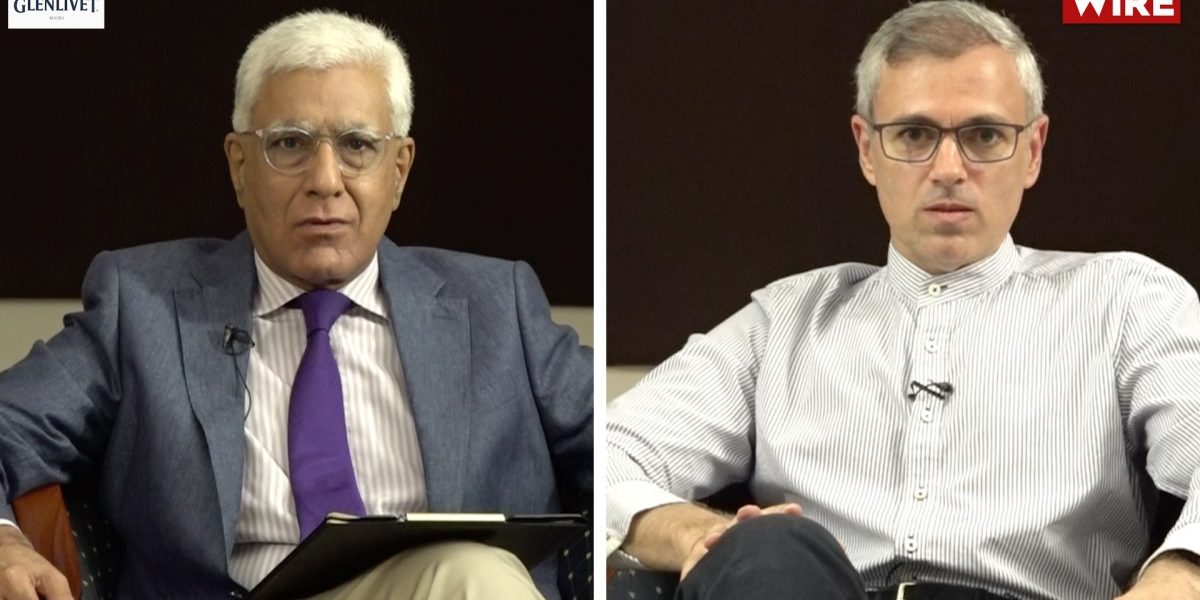 Omar Abdullah, former chief minister of Jammu and Kashmir, has said he is “very greatly alarmed” by the targeted killing of seven civilians in the Kashmir Valley over the past ten days. But Abdullah does not believe this is an attempt by Islamist terrorists at ethnic cleansing of the Valley. However, he says that the targeted killing of minority civilians suggests the government either ignored intelligence inputs, which for several months have suggested such killings could happen, or, more possibly, failed to act adequately. The latter, he agreed, clearly suggests incompetence by the Lieutenant Governor’s administration in Srinagar.

Separately, speaking about the resignations of Devender Singh Rana and Surjit Singh Slathia from the National Conference Party, Abdullah unhesitatingly and clearly said this had personally upset and shaken him. A visibly emotional Abdullah said he had repeatedly defended Devender Singh Rana against other party colleagues, who were claiming for weeks that he would leave the party.

In a 30-minute interview with Karan Thapar for The Wire, Abdullah, who is also the working president of the National Conference Party, explained why he does not agree with the view that the targeted civilian killings suggest another attempt by Islamist terrorists to ethnically cleanse the Valley. He said there have been 28 civilian killings so far this year and 21 of those were Muslims. As he put it, if this was ethnic cleansing, the ratio would be very different, if not the opposite.

Omar Abdullah told The Wire he was very worried and concerned about reports that Kashmiri Pandits have locked themselves inside gated communities and have either started to leave or are planning to leave the Valley. He said, in many instances, the state government is the party that has locked them in closed communities. He said the government has locked them inside transit camps. He said they are not permitted to go out and all groceries, including milk, are delivered to the camp door.

Abdullah said he was very worried about reports that Pandits and Sikhs are leaving the Valley or many have already left. This, he said, could presage “the dark days of the 1990s”.

He said the Kashmiri people did not want Pandits and Sikhs to depart and he and his party are determined to make every effort to ensure they stay on and feel welcome.

However, Abdullah denied claims on several Kashmiri Pandit WhatsApps and in newspaper articles by authors like Rahul Pandita that human rights activists, who express deep concern when Muslims are killed, are silent this time. He said that is not true. Instead, he pointed out the people who are silent are Prime Minister Narendra Modi and the Union home minister Amit Shah. They have had nothing to say about the targeted killings of the last ten days.

Speaking about reports in papers like the Indian Express that the Sikh community in Srinagar is questioning why the majority Muslim community did not join its protest outside the secretariat, Omar Abdullah said this is probably because they did not know about it and no one reached out to them. Speaking for himself, he said he did not know the Friday protest was happening. If he had, he would have ensured his colleagues were present and participating, even if he himself could not be there.

Abdullah said the targeted killings of civilians over the past ten days completely gives the lie to claims by the government, both in Delhi and Srinagar, which have been endorsed by several Army Generals, that the situation in the Valley is at or near normal. He said when civilians like Makhan Lal Bindroo, the chemist, who remained in Srinagar right through the dark days of the 1990s, are killed for no apparent reason, it shows the situation cannot be normal. Second, he said the killings have happened in the centre of the city, a few hundred metres from the secretariat or the high court, and this central location again makes clear the situation is not normal.

Abdullah was sharply critical of the government’s response of arresting “up to 700” people who are said to be over-ground workers of the LeT and Jaish. He called this “a knee-jerk reaction”. He said some of these people may have had connections in the past with the LeT and Jaish and, perhaps, were also stone-throwers at some point, but to mass arrest them on the grounds they are responsible for the recent killings makes a “mockery” of the government’s response. He says this is simply to show the Kashmiri Pandit community and the Sikh community that the government is concerned and responding. Worse, he accepted this could embitter and alienate Kashmiris who could believe innocents have been picked up simply as showpiece arrests.

At the end of the interview, Abdullah was questioned about Devinder Singh Rana and Surjit Singh Slathia’s resignations. He looked visibly upset and emotional and took his time before he answered. He said more than a setback for his party, the National Conference, this was a personal loss for him. He said both men were close to him. The association with Devinder Singh Rana goes back, as he put it, two decades and more.

Abdullah said he had strongly and staunchly defended Rana against claims by other party men that Rana was poised to leave. Now he has to admit he was wrong and they were right.

The last five or seven minutes of the interview with Omar Abdullah are on this subject. Rather than summarise it, it needs to be seen and heard.  It’s not just what he says that is important but also the emotion behind it and the feelings of loss and hurt that are clearly visible on his face. Omar Abdullah has addressed this issue with transparency and honesty and accepted this is a loss for his party and for him personally.

The above is a paraphrased precis of Omar Abdullah’s interview to Karan Thapar for The Wire. Although recounted from memory, it is not inaccurate. However, there is much more in the 30 minute interview than has been covered by this precis. Please see the full interview to better understand Omar Abdullah’s views both on the targeted killings in Kashmir and their impact as well as their implications for the future and also to understand his response, as working president of the National Conference and personally as an individual, to the resignations of Rana and Slathia.