Why the Resistance Against Auroville's 'Crown' Project Is Not Justified

By blocking development in Auroville, the city's residents cannot claim to stand for 'human unity' – the premise on which it was founded in the 1960s.

the clearing of the Crown, Auroville’s main urban path, once again met with resistance after 25 years of discussion and waiting, on December 4. The police had to be called to help the work proceed. There was no violence and no one was hurt, as it is being alleged.

These chaotic events and the organised polarisation of the community have been deeply saddening. A fact-check is the need of the hour.

Auroville cannot claim to stand for ‘human unity’ until the city announced and promised to the world in February 1968 is built together with agreements and concord.

Denying Auroville from realising itself as a city and the wilful blockade of the Master Plan by an organised group who claim to speak for the whole of Auroville, through misinformation and petitions, have brought things to a standstill. Clearing the designated land for Auroville’s Crown project has been stopped once again taking the rest of Auroville and its hopes for the future hostage. This is as grave as when the Sri Aurobindo Society (SAS) took Auroville to court based on wrong claims in 1975.

So, this orchestrated campaign of propaganda and defamations, in the name of human unity, needs to be examined.

Auroville over the years

Auroville was inaugurated in February 1968 with a charter and a city plan that the Mother – Mirra Alfassa, the spiritual leader who was the founder of Auroville – had herself commissioned, by inviting architect Roger Anger. She worked with him for three years to come to a model that was finally approved in January 1968. This came to be known as the Galaxy Plan and was displayed prominently at the entrance of Auroville’s amphitheatre, where the Charter was then read out, welcoming the people of the world. 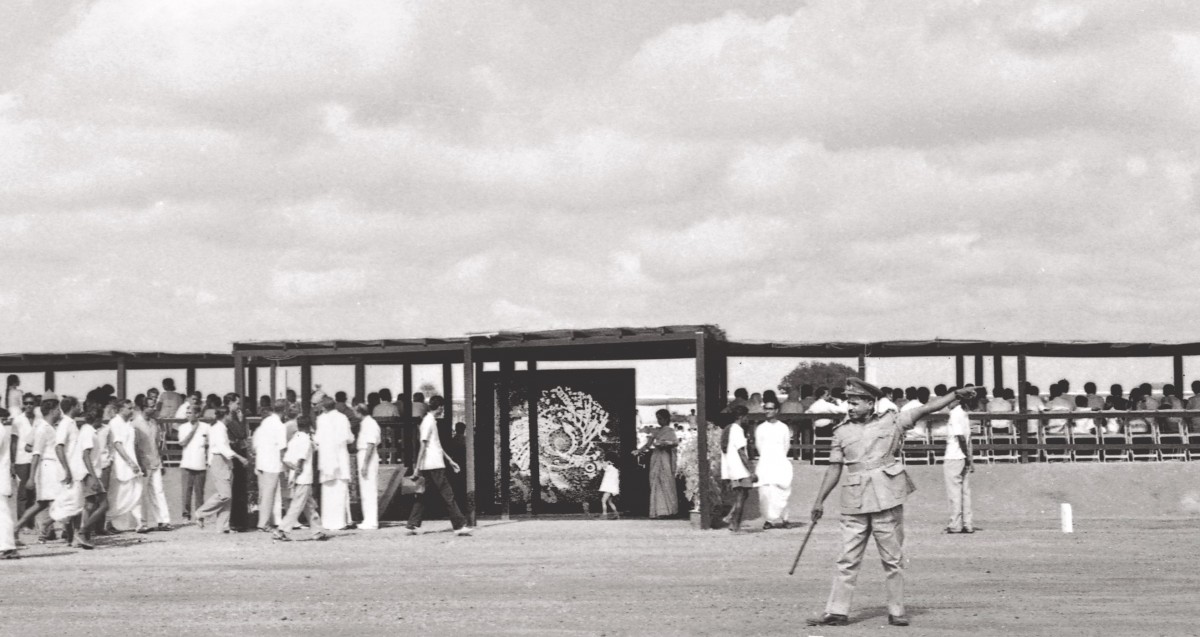 In December 1975, soon after the Mother passed away, the SAS filed an affidavit in a Pondicherry court claiming, among other things, legal ownership of land. The court case would stretch to 12 years in which the SAS took the matter to the Supreme Court claiming that Auroville was a religious body and, as such, the government could not interfere.

These were grave insinuations, threatening the very basis of Auroville and the principles on which it stands: non-ownership – as land and property belong to Auroville and not to any person or religion.

The ‘City the Earth Needs’ had been clearly defined:

“Earth needs a place where men can live away from all national rivalries, social conventions, self-contradictory moralities and contending religions. A place where human beings, freed from all slavery to the past, can devote themselves wholly to the discovery and practice of the Divine Consciousness that is seeking to manifest. Auroville wants to be this place…”

The land bought in the name of the SAS was for building the city, the place to manifest those aims. It needs to be stated that the February 1968 plan had no green belt. The brief to the architect was for an experiment for humanity contained in a city for 50,000 people envisioned in such a way that there was a place for everything and everyone, and an urban area balance with over 50% green cover. Soon after, the architect also proposed a green belt around the city area. The Mother agreed to this provided it was used for agriculture to sustain the town.

Auroville started on a vast barren land, which by standard logic, would not be suitable for such a daring project. This did not deter the project from going ahead with the aim of finding the most innovative or direct solutions for the most material and spiritual problems of earth and humanity. This is the scope given in the Auroville Charter.

The early years saw dedicated work to regenerate the land and slowly turn it green and fertile. Much more happened in areas of renewable energy, water, education and culture, but these were not immediately visible. With the coming of the Auroville Foundation Act, certain processes were put in place by the governing board, like the Master Plan, needed for the development of this unique city.

This brought the first open resistance against the city plan. But after two years of dialogue, a near-unanimous agreement was reached and the process was followed through with approvals and the Master Plan published in the Gazette of India in 2010.

‘A lobby responsible for stalling development in Auroville’

Unfortunately, the narrative around Auroville began to shift even as the Master Plan was being formulated and the media messaging about Auroville morphed from ‘City of the Future’ to assertions of an eco-village, forest city, sustainability and lifestyles. At first, this shrunk and changed paradigm went unnoticed till it became a small but dominant lobby interfering with the development of the city.

Despite the Master Plan being in place and its key elements ratified by the Residents Assembly, which included the Crown, the development of the town was stalled for over 20 years citing trees, environmental and topographical concerns. Those who opposed development did not offer proposals that would successfully integrate with the Plan.

The interim years saw trees deliberately being planted over sections of the Crown, making it inaccessible for Aurovilians. Blocking work on key sections of this Plan area had become a pattern. Land ownership came into practice under the excuse of trees. Areas designated for the city under the Master Plan were taken over without process or permissions. In the process, trees were planted without consulting the plans for the area; and the area was declared as a forest.

While one came to hear statements of support for the city plan in public, it was met with stone-walling in practice. This includes matters regarding Auroville’s detailed development plans, its land protection and roads which have been repeatedly and systematically stalled with excuses for further studies, dialogue or process.

The latest attempt at stalling work is the demand for an environmental impact assessment (EIA) before completing the remaining work on the Crown and even changing the Master Plan. Given that over 40% of the Crown is already complete along with buildings funded by the Government of India, the latest demand by those opposing the project becomes all the more questionable. Holding up the Crown would mean holding up the new pedestrian-friendly mobility, adding to the pollution, retarding Auroville’s urban centre and increasing the financial burden.

Changing a conventional municipal plan may be possible by conventional means, but a visionary plan supported by a charter to hold an experiment is a very different matter.

Auroville already has three million trees, roughly 1,000 trees per person of the present population. For trees removed, re-plantation is planned in Auroville’s green zones. On the other hand, Auroville’s work on renewable energy remains exemplary.

Unfortunately, a section of youth has been influenced and misled by all this for years. Some of them feel quite differently about all that is happening, but are too intimidated to speak up. Given the lack of education regarding the project they inhabit, they have come to believe that nothing should be done to harm the ‘forest’.

The Youth Centre was placed where it is now, on a temporary basis, with documented agreements that no buildings would be built there and no obstruction would be made when the road needed to come. All these agreements have been flouted due to obstruction. Not collaborating has been the norm over the years prompted by some. This has only legitimised the impunity of these actions.

What should have been an internal matter for Auroville has now been blown out of proportion with claims of external threat. This ‘conflict’ orchestrated via media and petitions and the targeting of people who they view as ‘enemy’ in the name of human unity need to be debunked and the future unblocked.

Anu Majumdar has been a long-time resident of Auroville, and the author of Auroville: A City for the Future.