Why a Distributed Capital Makes More Sense for Andhra Pradesh

Distributing the functions of a capital city over several cities is a new tool of growth management. 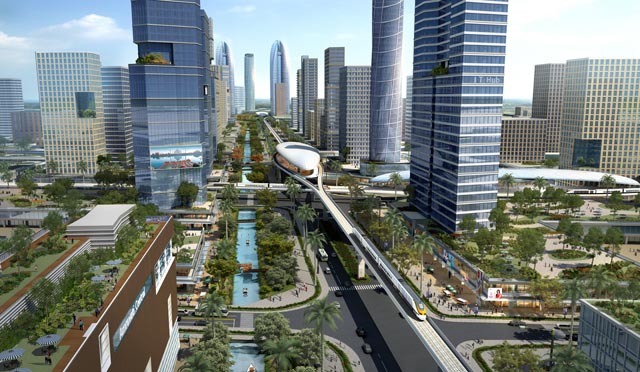 Conventionally, states in India have single cities as their capitals. Whether to have a single city as a capital or distribute the capital functions among several cities depends on the way the network of cities has developed in the state. Let us see how the spatial distribution of cities has evolved in different states in India.

During the 17th and early parts of the 18th century, India had flourishing manufacturing centres whose products were known throughout the world for their quality, low cost and craftsmanship. With the advent of the British, this changed. The overarching goal of colonialism was to extract raw materials from the hinterlands of India and supply manufactured goods. This economic logic of colonialism naturally led to a reordering and restructuring of Indian cities. This reorganizing of cities produced the following spatial pattern in India at the time of independence-

This spatial pattern largely continued after independence. Only in the 1990s, outsourcing of services led to the rise of Hyderabad and Bengaluru as major cities in addition to the existing four – Delhi, Mumbai, Kolkotta and Chennai.

The IT area in Hyderabad. Photo: Flickr/Amit Chattopadhyay CC BY 2.0

Thus, states in India have two types of spatial patterns. The first type consists of few main cities, which provide goods and services to smaller towns and villages. Some of the states in this group are – Uttar Pradesh (having the KAVAL towns: Kanpur, Allahabad, Varanasi, Agra and Lucknow); Rajasthan (Jaipur, Udaipur); Punjab (Ludhiana, Amritsar); Haryana; Madhya Pradesh (Bhopal, Indore) and Kerala. The set of main cities have dominant economic influence on the surrounding areas. The economic effect is because of its linkage with other human settlements. Earlier this influence was limited to the hinterlands of the city, now it could cover the entire state-wise or the country or even the world. This economic links could be due to the ability of the main city to provide goods and services (eg Kanpur) or be a node in the transport hub (eg Nagpur) or be an administrative centre (eg Chandigarh). This is called the network spatial pattern of cities.

The second type of spatial pattern is different – in this structure, there is a predominant city and is called the primate city pattern. The primate city has an overwhelming economic influence in the state and largely drives growth. The states falling into this category are Tamil Nadu (Chennai), Maharashtra (Mumbai), West Bengal (Kolkotta) and the Delhi NCT.

The erstwhile Andhra Pradesh state was unique. It was created by merging two areas – parts of the Nizam’s dominions with some areas under the Madras Presidency. Spatially, these two areas were different – while the Nizam’s dominions contained one primate city (Hyderabad), the Madras presidency consisted of a network of main cities (Vijayawada, Vishakapatnam, Kurnool).

After the bifurcation of erstwhile Andhra Pradesh in 2014, we again have two states: Telangana with a primate city (Hyderabad) and Andhra Pradesh with its network of main cities. In a state with a network of main cities, the idea of having several capitals is a more effective development strategy because it is a sustainable growth management strategy.

The conventional tools of growth management are land use/building regulations, imposing impact fees, establishing growth boundaries, and so on. Distributing the functions of a capital city over several cities in a state is a new tool of growth management. Andhra Pradesh aims to carry out growth management at the state level by leveraging on the existing spatial pattern of cities. This strategy of growth management will be able to achieve a balance between the three Es: economic development, environment preservation and equity. Specifically, this bold and new growth management strategy will be better able to achieve a balance between the amount of growth and the ability to provide transportation, energy, water and waste disposal, public safety, education, public health, and other services in all areas of Andhra Pradesh. Most important, it will be able to ensure the ability of natural systems, such as food production, water quantity and quality, air quality, plant and animal habitat, and now, the climate itself to sustain growth.

The chances of success of Andhra Pradesh to distribute capital functions among several cities are high as the non-conformist approach builds on the unique history of development of spatial patterns in the state. The success of the initiative will be a lighthouse for other States to emulate, particularly those containing a network of main cities.

Sameer Sharma has a PhD from the USA and a DLitt from Kanchi University. The article is based on his research and practice and views are personal.