When Mark Twain Came to Bombay

Twain finds Bombay – India – an enchanting land, full of colour and beauty but also the plague that the city was grappling with.

In 1895, author Mark Twain set out on a tour of the British empire. His primary aim was to make some money and pay off debts he had built up by investing in the Paige Compositor, an invention that was to replace the human typesetter. But the project failed.

He landed in 1896 in Bombay and stayed at the city’s leading hotel, Wastson’s. Watson was to become famous a few months later as the venue of the first ever screening of a film by the Brothers Lumiere and also for reportedly not allowing industrialist Jamshed Tata to enter, prompting him to build the Taj Mahal Hotel. A decrepit structure now, renamed Esplanade Mansion, Watson’s was in the news when a portion of a balcony crashed onto a taxi standing right below.

At that time it was the most luxurious hotel in the city, hosting the British elite. Twain writes about the countries he visits with his customary wit, keen sense of observation and humanity, commenting on racism, religious intolerance and the imperialistic behaviour of the British empire.

Twain finds Bombay – India – an enchanting land, full of colour and beauty but also the plague that the city was grappling with. In Bombay, he met and was feted by British officials, Maharajas and merchant princes such as Premchand Roychand.

Excerpts follow from Mark Twain’s Following the Equator: A Journey Around the World.

January 20th. Bombay! A bewitching place, a bewildering place, an enchanting place – the Arabian Nights come again! It is a vast city; contains about a million inhabitants. Natives, they are, with a slight sprinkling of white people— not enough to have the slightest modifying effect upon the massed dark complexion of the public. It is winter here, yet the weather is the divine weather of June, and the foliage is the fresh and heavenly foliage of June. There is a rank of noble great shade trees across the way from the hotel, and under them sit groups of picturesque natives of both sexes; and the juggler in his turban is there with his snakes and his magic; and all day long the cabs and the multitudinous varieties of costumes flock by. It does not seem as if one could ever get tired of watching this moving show, this shining and shifting spectacle.

…In the great bazar the pack and jam of natives was marvelous, the sea of rich-colored turbans and draperies an inspiring sight, and the quaint and showy Indian architecture was just the right setting for it. Toward sunset another show; this is the drive around the sea-shore to Malabar Point, where Lord Sandhurst, the Governor of the Bombay Presidency, lives. Parsee palaces all along the first part of the drive; and past them all the world is driving; the private carriages of wealthy Englishmen and natives of rank are manned by a driver and three footmen in stunning oriental liveries – two of these turbaned statues standing up behind, as fine as monuments. Sometimes even the public carriages have this superabundant crew, slightly modified – one to drive, one to sit by and see it done, and one to stand up behind and yell – yell when there is anybody in the way, and for practice when there isn’t. It all helps to keep up the liveliness and augment the general sense of swiftness and energy and confusion and pow-wow. 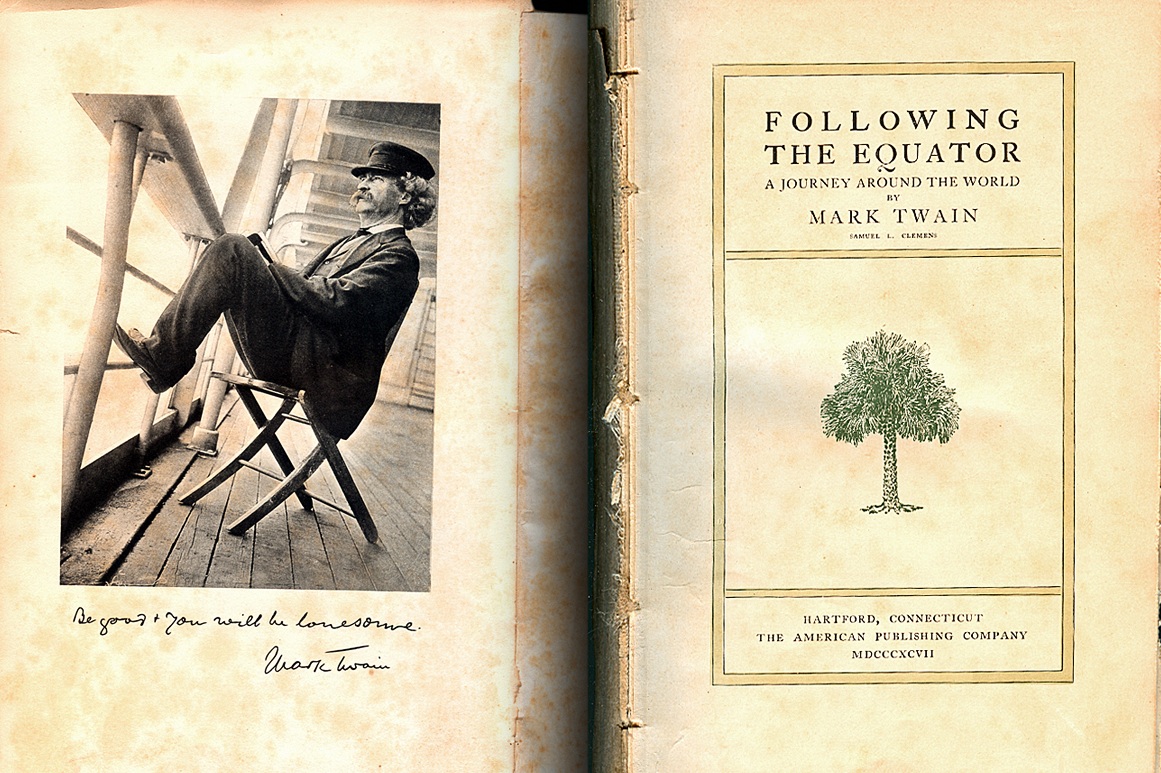 In the region of Scandal Point – felicitous name – where there are handy rocks to sit on and a noble view of the sea on the one hand, and on the other the passing and repassing whirl and tumult of gay carriages, are great groups of comfortably-off Parsee women – perfect flower-beds of brilliant color, a fascinating spectacle. Tramp, tramp, tramping along the road, in singles, couples, groups, and gangs, you have the working-man and the working-woman – but not clothed like ours. Usually the man is a nobly-built great athlete, with not a rag on but his loin-handkerchief; his color a deep dark brown, his skin satin, his rounded muscles knobbing it as if it had eggs under it. Usually the woman is a slender and shapely creature, as erect as a lightning-rod, and she has but one thing on – a bright-colored piece of stuff which is wound about her head and her body down nearly half-way to her knees, and which clings like her own skin. Her legs and feet are bare, and so are her arms, except for her fanciful bunches of loose silver rings on her ankles and on her arms. She has jewelry bunched on the side of her nose also, and showy cluster-rings on her toes. When she undresses for bed she takes off her jewelry, I suppose. If she took off anything more she would catch cold. As a rule she has a large shiney brass water-jar of graceful shape on her head, and one of her naked arms curves up and the hand holds it there. She is so straight, so erect, and she steps with such style, and such easy grace and dignity; and her curved arm and her brazen jar are such a help to the picture – indeed, our workingwomen cannot begin with her as a road-decoration.

It is all color, bewitching color, enchanting color – everywhere – all around – all the way around the curving great opaline bay clear to Government House, where the turbaned big native chuprassies stand grouped in state at the door in their robes of fiery red, and do most properly and stunningly finish up the splendid show and make it theatrically complete. I wish I were a chuprassy.

This is indeed India! the land of dreams and romance, of fabulous wealth and fabulous poverty, of splendor and rags, of palaces and hovels, of famine and pestilence, of genii and giants and Aladdin lamps, of tigers and elephants, the cobra and the jungle, the country of a hundred nations and a hundred tongues, of a thousand religions and two million gods, cradle of the human race, birthplace of human speech, mother of history, grandmother of legend, great-grandmother of tradition, whose yesterdays bear date with the mouldering antiquities of the rest of the nations – the one sole country under the sun that is endowed with an imperishable interest for alien prince and alien peasant, for lettered and ignorant, wise and fool, rich and poor, bond and free, the one land that all men desire to see, and having seen once, by even a glimpse, would not give that glimpse for the shows of all the rest of the globe combined.

Even now, after the lapse of a year, the delirium of those days in Bombay has not left me, and I hope never will. It was all new, no detail of it hackneyed. And India did not wait for morning, it began at the hotel – straight away. The lobbies and halls were full of turbaned, and fez’d and embroidered, cap’d, and barefooted, and cotton-clad dark natives, some of them rushing about, others at rest squatting, or sitting on the ground ; some of them chattering with energy, others still and dreamy ; in the dining-room every man’s own private native servant standing behind his chair, and dressed for a part in the Arabian Nights.

Our rooms were high up, on the front. A white man – he was a burly German – went up with us, and brought three natives along to see to arranging things. About fourteen others followed in procession, with the hand-baggage; each carried an article – and only one; a bag, in some cases, in other cases loss. One strong native carried my overcoat, another a parasol, another a box of cigars, another a novel, and the last man in tlie procession had no load but a fan. It was all done with earnestness and sincerity, there was not a smile in the procession from the head of it to the tail of it. Each man waited patiently, tranquilly, in no sort of hurry, till one of us found time to give him a copper, then he bent his head reverently, touched his forehead with his fingers, and went his way. They seemed a soft and gentle race, and there was something both winning and touching about their demeanor.