The Delhi Deputy Conservator of Forests has written to civic authorities noting that if trees are felled to allow for facilities green lit by the Master Plan for Delhi, there will be no 'avenue trees' inside residential colonies. 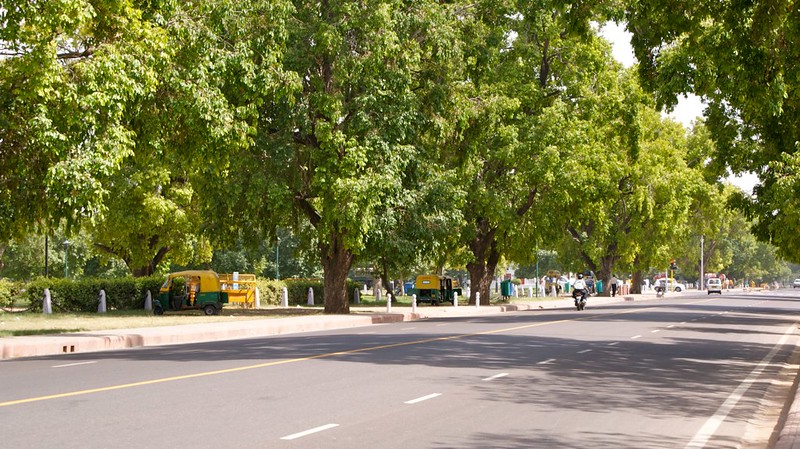 New Delhi: Environmental activists have cautioned that rampant felling of trees in Delhi to make way for new buildings or stilt parking facilities allowed under the provisions of the Master Plan for Delhi 2021 poses a grave threat to the ecology of the city and could end up leaving most of the colony roads treeless in a few decades.

The issue has been raised by architects and lawyers before authorities multiple times. One of the complainants, architect Shilpa Malik, who has on multiple occasions approached the Forest Department to seek conservation of Delhi’s trees, told The Wire that the problem of cutting down fully grown trees in colonies has reached alarming proportions.

“These trees are being cut both outside and within the setback area of buildings that are being renovated or rebuilt. Also, a large number of these trees are cut in the name of providing access to the stilt-parking area that is now allowed on the ground floor.”

The architect who is a complainant in several such cases said it is surprising that while people are willing to pay a premium to reside in colonies that have a lot of greens, the builders or even plot owners who are renovating their buildings prefer cutting down the trees rather than retaining them.

Malik warned that if the felling of trees is allowed to go on at the current rate then in a couple of decades from now, there would be no trees left inside the colonies. “The only trees you will find then would be in the parks,” she said.

Also read: Delhi: Over 5,100 Trees Proposed to Be Felled For Construction of Highway

Last month Deputy Conservator of Forests and Tree Officer (South Forest Division) Amit Anand wrote to heads of all the four civic bodies of Delhi – the Commissioners of the North, South and East Delhi municipal corporations and the chairman of New Delhi Municipal Council – to state:

“Whenever any construction/reconstruction activity takes place in a plot, the trees located in the set-back area of the plot and the trees located outside the plot boundary on public land/street are almost always proposed to be felled by the applicants under Delhi Preservation of Trees Act, 1994 (herein referred as DPTA).”

He cautioned, “This will eventually lead to a situation in the future where all trees standing on public land outside any plot would be felled leaving no avenue trees inside residential colonies.”

The official stated that “since no construction is permitted in the set-back area, existing trees located there must not be unnecessarily made vulnerable to felling.” He also urged the heads of the four municipal bodies to “rationalise number of trees to be affected” by any project by “realigning the design based on existing trees in the area.”

Trees also being cut to create multiple gates for plots

Another aspect of tree felling that was highlighted in the letter pertained to felling them for creating multiple gates for accessing any plot or building. Anand wrote:

“In almost all cases before this office multiple gates/ entrances are approved in the site plans. This thus has an inevitable consequence that eventually when an applicant applies for tree felling he/she cites the approved site plan and states that the tree(s) are an obstruction to the gate(s). This presents the Tree Officer with a fait accompli situation.” 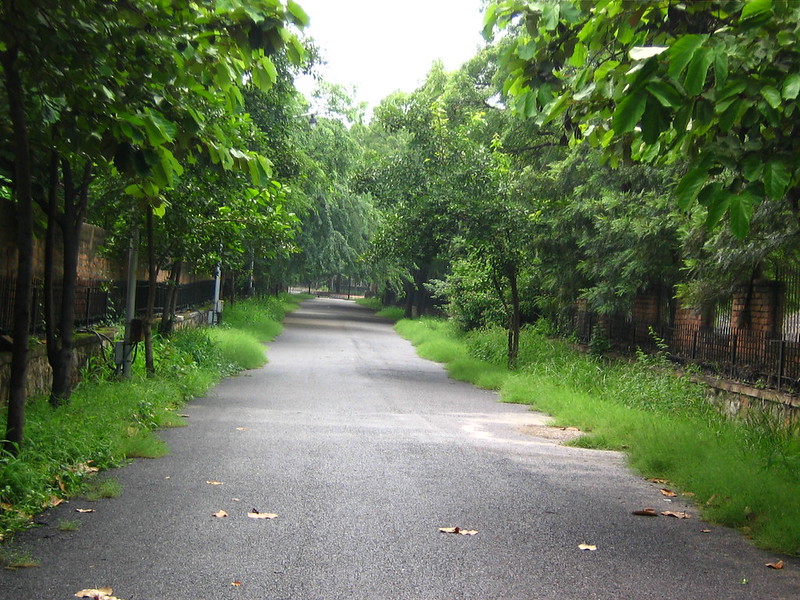 Anand also elaborated how stilt parking being allowed for new plots is creating a situation where more and more colony trees are being cut. He wrote:

“Trees which are located just outside the plot but on the street also face unnecessary peril because more often than not, the design/ layout in the site plan is such that these trees come in the way of the entrance(s)/ gate(s) which provide access to the stilt car parking area inside the plot.”

“Tt is often seen that multiple gates are constructed so as to provide exclusive and direct access to almost each and every parking space in the stilt area of the building. This in turn requires unencumbered approach from outside the plot. Hence the tree officer is again presented with a fait accompli situation when applicants seek permission to fell trees based on sanctioned/ approved Site Plans with multiple entrance(s)/ gate(s).”

Anand’s letter to the civic bodies also referred to how under the new Master Plan for Delhi, the provision of stilt parking had been made for residential plots.

The new Act lays down that:

“Parking space shall be provided for within the residential plot as follows: a) 2 Equivalent Car Space (ECS) in plots of size 250-300 sq.m. b) 1 ECS for every 100 sq.m. built up area, in plots exceeding 300 sq.m., provided that, if the permissible coverage and FAR is not achieved with the above-mentioned parking norms in a plot, the parking norms of the preceding category shall be allowed.”

The forest official had stated that this provision clearly reflects that it is not mandatory to provide each and every parking space with a separate and dedicated access to the road by sanctioning multiple gates along the front or rear façade or boundary wall. He therefore said only a minimum number of gates or entrances should be approved in the site plan, keeping in mind the trees standing outside the plot, for providing access to the parking spaces.

Reacting to Anand’s letter and the overall tree felling issue, an environmental lawyer based in Delhi, Aditya N. Prasad, said: “The first thing that comes to mind is that the concerned officer would be transferred for taking such a stand. Nevertheless, the letter raises significant issues. Felling every tree outside newly constructed homes is already showing its disastrous effects in the city with every third child showing symptoms of asthma according to a recent study by the Lung Care Foundation.”

Prasad, who in the past has moved courts against attempts by various civic and construction agencies to undertake cutting of trees on public land, added that recently the Delhi high court had also ordered the Forest Department to look into the revelation that 77 trees were found missing in Sarvodaya Enclave when the residents undertook a census of trees.

“Delhi,” Prasad said, “has been nefariously felling one tree every hour for the past decade. The focus needs to shift from money guzzling smog towers to preserving existing trees. I don’t expect the Forest Department to take a hard stand as they have no manpower despite court orders, but the letter is a welcome respite in the midst of mindless tree felling.”

Incidentally, data shared by the Delhi government on its website following directions from the Central Information Commission (CIC) and the Delhi high court had revealed that between 2005 to February 2018, a total of 112,169 trees had been cut in the city. This showed that on average 24 trees were officially cut each day. 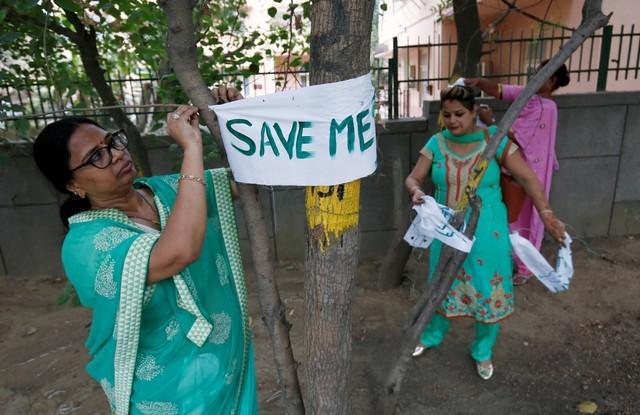 A women ties banners on trees during “Save The Tree Campaign” in New Delhi, India, June 26, 2018. Photo: Reuters/Adnan Abidi

The issue of stilt parking construction efforts causing large scale cutting of trees was also flagged by the Forest Department before the municipal corporation in the neighbouring satellite township of Gurugram in June this year.

As in Delhi, the office of the Deputy Conservator of Forests in Gurugram had also written to the Municipal Commissioner of the district to state that more trees were being felled due to the civic body’s decision to increase the floor area ratio (FAR) which allowed construction of four floors with a stilt parking on residential plots.

There too the Forest Department official had urged the civic body to ensure that “the concerned officer should assess the tree felling permission applied by the residents and review whether the request for tree felling is in tandem with the approved plan for green cover along the roads lanes of the residential sector.” The letter had also stated that “the grant of permissions for the multiple gate access to the same residential premises would result in loss of tree cover along roads and would also be a breach of the developmental plan of the said area.”