Three Myths About the Centre's ‘Self-Financing’ Model of Urban Redevelopment

Commercial space is being carved out of government land parcels in Delhi, at a huge cost to the exchequer and the environment. 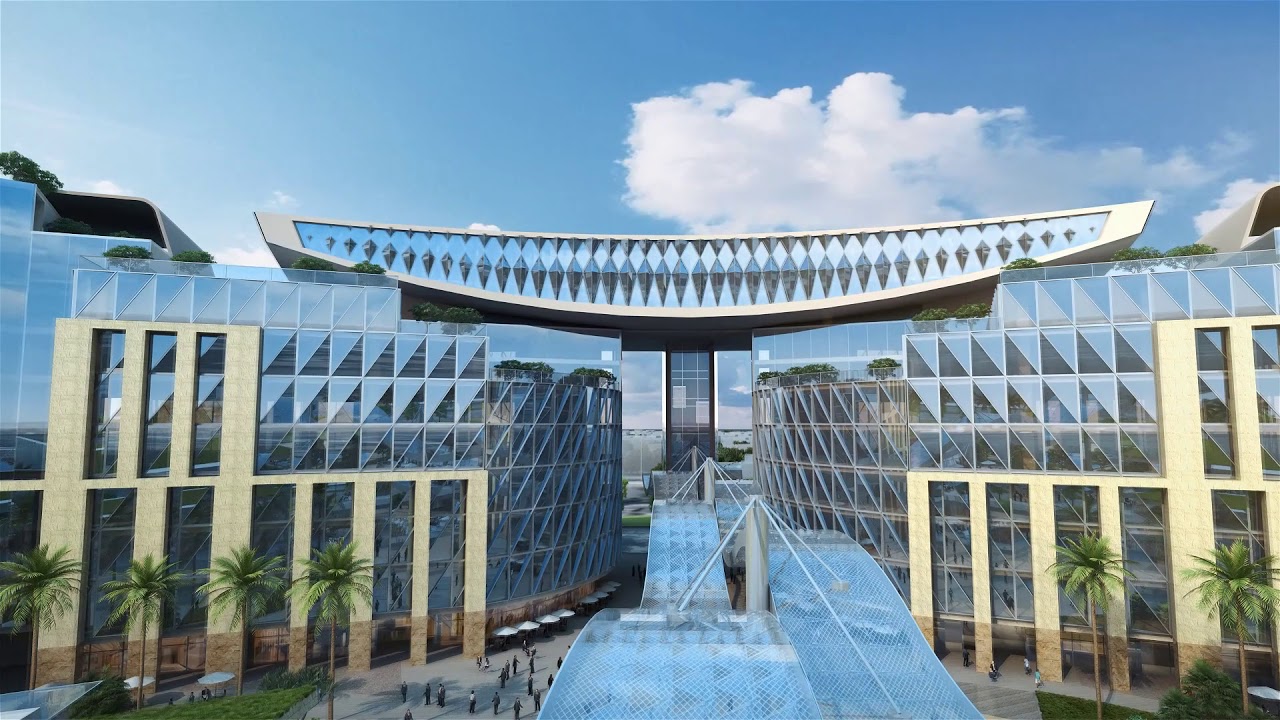 A massive redevelopment project planned for seven old residential colonies in the leafiest part of Delhi is all set to ruin not just the capital’s already fragile ecology but also place a huge burden on taxpayers.

A public interest petition filed by a Delhi based orthopedic surgeon, Dr Kaushal Kant Mishra, has challenged the project, known in official parlance as the 7 GPRA project. The main grounds of the legal challenge are

i) the fictions created by the project consultants in the name of its environmental impact studies,
ii) total disregard by the project’s promoter, the Ministry of Housing and Urban Affairs (MoHUA), and implementor, NBCC, for the shortage of water resources in the city,
iii) the attempted takeover of public road space by escalating car traffic in the area,
iv) Delhi master plan violations, and
v) the plan to fell over 16000 trees.

The project is claimed to be in the public interest since it will increase the volume of government accommodation in Delhi. Moreover, it has been hailed as a “self financing” one, meaning that it involves no cost to the government as the sale/lease of commercial space will subsidise residential units.

It is important to examine if these claims are true since this “model” of redevelopment is being proposed across all 30 government housing colonies in Delhi, covering about 1,100 hectares, as well as in various other Indian cities.

The recently built East Kidwai Nagar (EKN) and the proposed 7 GPRA project (in Nauroji Nagar, Sarojini Nagar and five other colonies) are illustrative of the gap between the theory and practice of financing models for “redevelopment” of urban areas. 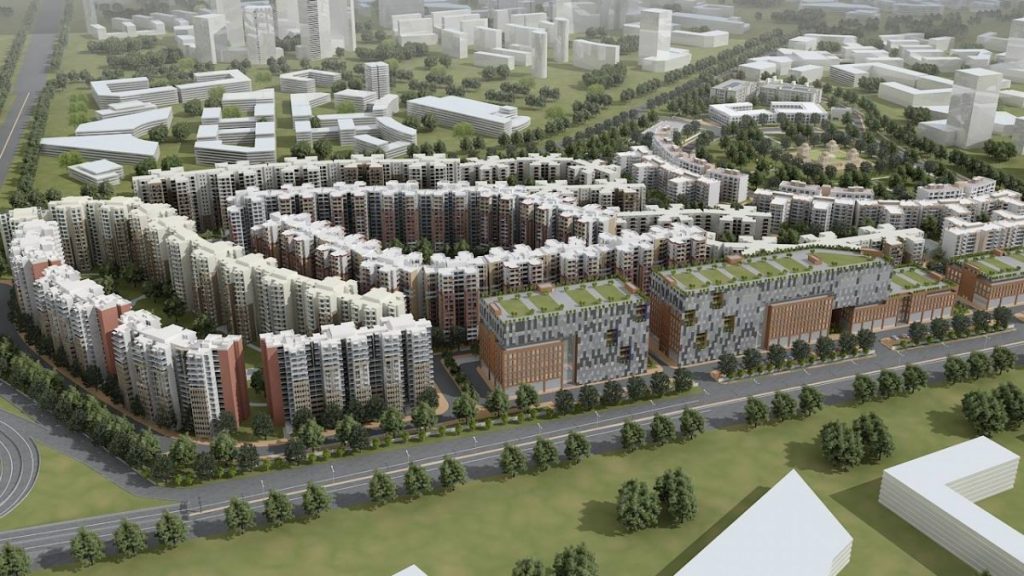 Claim no 1: This model of redevelopment saves public money

In EKN, MoHUA constructed 4,840 dwelling units by demolishing 2,331 units. To finance this, approximately 11 million square feet of commercial space was created in the plot of 86 acres and put to lease. One would assume, by the self -financing claim of the project, that it is the private sector which paid for the construction.

In reality, government departments like the Department of Revenue and several PSUs have leased the commercial space in EKN. Far from ‘saving’ any funds for the government, the leasing of EKN offices by government departments seems to have funded the Rs 4,264 crore EKN project. Moreover, one could argue that the exchequer ended up paying for 11 million square feet of additional space instead of just 4,840 government houses.

The evidence from EKN notwithstanding, MoHUA now proposes the 7 GPRA project which is much larger in scale, constructing 24,928 dwelling units and 11.3 million sq feet of commercial space, at a cost of Rs 32,835 crores. This is also claimed to be a self- financed project through sale of the commercial space in the project.

The 12 towers of the World Trade Centre at Nauroji Nagar are part of this project. One tower was put to auction last year and raised Rs 1,100 crores. Four out of the five buyers were public sector companies, purchasing space at a price of Rs 38,000 per square foot, making it the most expensive real estate in the NCR (Connaught Place costs Rs 25,000-30,000 per square foot).

One could ask, why are PSUs using public money to buy the most expensive real estate in NCR, instead of investing in development agendas they have been tasked with? Does this not amount to public financing of the redevelopment?

While EKN only leased to government, the auction for commercial space in Nauroji WTC was open to the private sector. But clearly, demand is lagging and the reason is not difficult to establish. The Nauroji World Trade Centre is hugely overpriced. Real estate websites show that the upcoming World Trade Centre, the world’s biggest, in Noida is selling at almost eight times less, at Rs 5000 per square foot. It is unlikely that private parties will step up to buy the millions of square feet of commercial space at these exorbitant rates.

The Rs 1,100 crore made from the sale so far represents less than 5% of the total of Rs 32,835 crore that has to be raised. If MoHUA and NBCC are forced to rely on government or PSUs to buy the remaining commercial space in GPRA, will the public not end up being the financier of last resort for this massive project, paying for the additional creation of commercial space in addition to footing the bill on government housing? 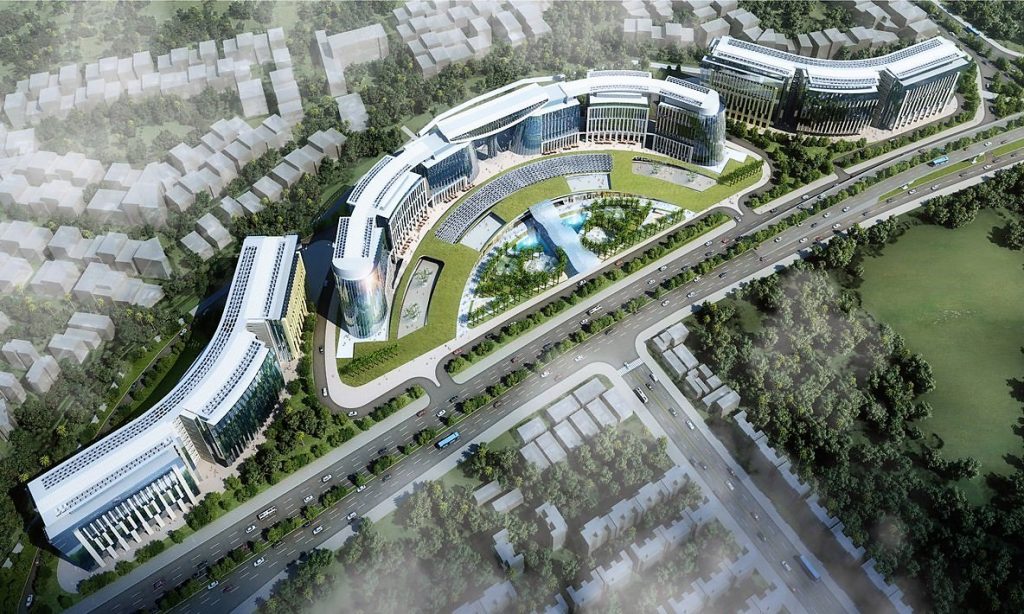 Claim no 2: This model of redevelopment is in the public interest

Both the EKN and 7 GPRA projects have been widely advertised as government housing projects. But the commercialisation aspects of both these projects deserve scrutiny. The project designs of 7 GPRA have yet to be disclosed to the public or to the court. But other publicly available documents indicate the following: MoHUA aims to finance the 7 GPRA by selling a proportion of the total built up area across the seven colonies on a free hold basis, most of it as commercial space.

In case the cost of the project cannot be recovered from this, 10% of the residential flats can also be sold. The construction of EKN and three sites of the 7 GPRA were allotted to NBCC, the PSU owned by MoHUA. NBCC earned the rights to develop, monetise and privatise public lands without any tendering, auctioning or any other system that creates a level playing field and ensures the most efficient use of resources by attracting the best architects/urban planners in the field.

The MoU between MoUD and NBCC is full of open-ended, expandable clauses, making it difficult to hold either accountable to the financial arrangements on the project.

The commercial space proposed to be built in 7 GPRA is over 10.5 lakh square metres including 2.4 lakh square metres for a government office. This roughly amounts to adding 25 Ambience malls within a 5 km stretch of the Ring Road. The construction work will be contracted out to private construction companies which will cut costs and maximise profits. It is these companies which enjoy the investment opportunities of a “self financed government housing project” that is bloated into a Rs 32,835 crores real estate bonanza instead of being a straightforward housing project.

In addition to commercial office space, the 7 GPRA provides for car parks on a massive scale even though the Delhi Metro services this region. The project proposes 42,665 car parking spaces over and above the norms set by the Town and Planning Organisation.

Also Read: In the Shadow of Delhi’s Redevelopment

One view is that this is being done for revenue since each slot is being sold for Rs 10 lakh and the total revenue just from the additional car parking will be Rs 4,266 crore. Another is that the project aims to expand and sell the commercial built up area after amending the Masterplan, a task that the ministry can do. Based on these aspects of commercialisation of the project, we could conclude that this project is in commercial interest and a huge opportunity for developers.

Claim no 3: This model of redevelopment creates public goods

The EKN project increased the government housing stock by 2,509 units. The 7 GPRA proposes to double housing from 12,970 to 25,667. But the choice of the financing model which adds five units of commercial space for every single unit of required housing, makes this redevelopment model a producer of many public “bads” or burdens.

The “densification” poses a huge load on public infrastructure. The 7 GPRA project provides parking for over a lakh cars in three of the seven colonies and 83,800 in Sarojini Nagar alone. The government will have to spend thousands of crores of rupees for road augmentation to accommodate additional traffic flow as these costs are not included in the project. Until this is done, this entire region will be even more polluted and congested by cars than it already is. 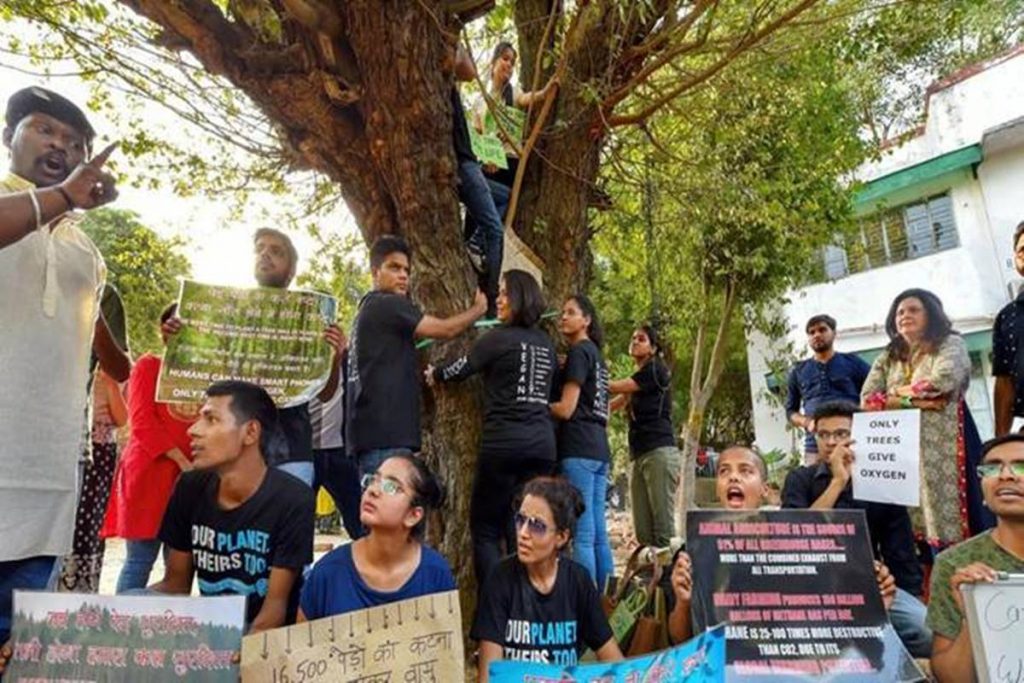 People gathered around a tree in Delhi to keep it from being cut. Credit: PTI

The creation of basements for car parking is also the primary reason for the uprooting of trees, a valuable “natural infrastructure” in these times of climate change and air pollution. There has been no assessment of the project’s cumulative water impacts. Recently, the Delhi high court stopped the possession of flats in EKN because of uncertainty over water supply.

Both EKN and 7 GPRA will prevent public access to these areas as they are planned as gated colonies. The environmental implications are a moot point because of the scale of these projects. A locality that housed fewer than 13,000 families will now see massive commercial activity and office traffic in addition to almost 25,000 families in the newly constructed government accommodation.

The EIA reports contained huge information gaps and fudged data, misleading the experts who recommended approvals to them.

Anticipating the challenge to the project due to its environmental consequences, 7 GPRA is broken up into seven smaller projects for regulatory approvals such as environmental clearance and tree felling. The EIA reports contained huge information gaps and fudged data, misleading the experts who recommended approvals to them.

All real estate projects, including government promoted projects, still hide behind the 2006 notification that exempts them from conducting public hearings. In fact, when citizens asked for public hearings and audits of these projects, a Central minister called them mischief mongers. When all these issues were raised in the public interest petition on 7 GPRA, the Delhi HC sent the project back to the drawing board for redesign and fresh approvals.

Who is Delhi redevelopment for?

Both the EKN and 7 GPRA projects raise many questions that the Central government has dodged in public forums and in courts. When the MPD talks of generating public housing for a growing city where 2/3rds of the city’s poor live on 15% of the total built up area, how can the MoHUA hide some of the biggest and most resource intensive, exclusive, commercial structures behind the fig leaf of government housing and public interest?

Why is Delhi NCR being forced to accommodate two world trade centres, several office complexes, convention centres and built parking spaces when existing building infrastructure like Palika Bhawan/ August Kranti and Nehru Place are underused and poorly maintained? Is ‘monetisation’ or the creation of overpriced commercial space out of government land parcels the new approach to the master planning of Delhi?

Manju Menon is senior fellow at Centre for Policy Research. Meenakshi Nath is a Delhi based independent environmental researcher.