The park's picturesque history hangs in a state of suspended animation between bureaucratic paralysis and political anxiety. 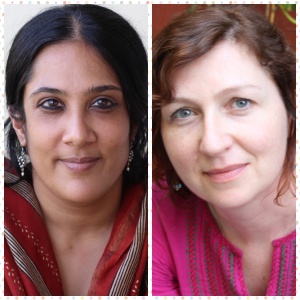 This article was first published on June 13, 2018 and has been republished on the 125th birth anniversary of Netaji Subhas Chandra Bose, January 23, 2022.

Subhash Park, across the road from the Red Fort in Old Delhi is not a prepossessing sight. A partially opened gate on Netaji Subhas Marg leads to a neglected, and rather desolate, five acres of parched scrubland across which decrepit stone paths still trace a route. One path leads, at the centre of the park, to a large statue of Subhas Chandra Bose, flanked by two, crouching, armed comrades, pointing portentously at the ramparts of the Red Fort. On each side of Bose, at the southern and northern edges of the park, are two other structures: a mazaar (the tomb of a saint) on a raised platform and at the opposite end, a canvas tent. The tent, guarded by a police officer, covers archaeological remains discovered during the metro excavations in 2012, rumoured to be the remains of the Akbarbadi mosque destroyed during the violent reprisals of the British following the 1857 rebellion.

The Delhi Metro Rail Corporation (DMRC) took over the park in 2012 to construct the Heritage Metro Line that runs through the Old City. While it is hard to imagine the park as possessing a picturesque past, residents of the area and old photos attest that it consisted of pathways, benches, palm and narangi trees prior to its acquisition by the DMRC. These features have disappeared, along with the malishwalas for which Subhash Park was once known. 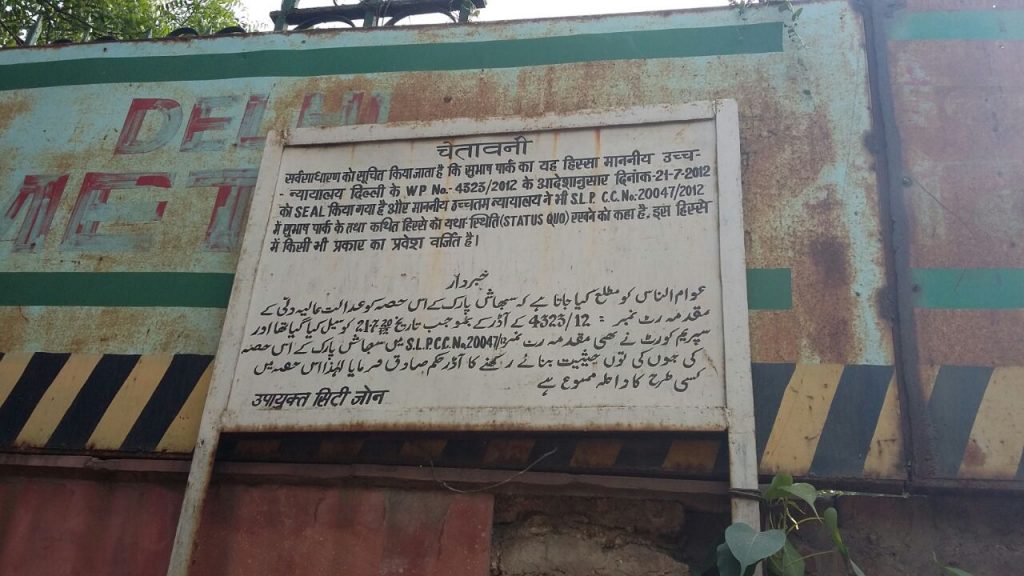 A 2012 court notice prohibiting entry into the park, with a rusted DMRC board in the backdrop. Credit: Special Arrangement

The DMRC has returned the park to the city on the understanding that the New Delhi Municipal Corporation (NDMC) will restore it. There are no signs that this will happen any time soon except for stacks of paving stone lying across the remaining paths. The park now awaits an excavation, promised by the Archaeological Survey of India that will explore the remains discovered and establish whether the disputed mound is in fact a Mughal era mosque.

The zari-edged green cloth on the mazaar provides a sudden burst of colour to the dusty desolation of the park today. Mohammad Ashfaq who sells sugarcane juice outside the park entrance said that he leaves flowers there on Thursdays but said he didn’t know the pir’s (saint’s) name. The gem seller whose stall is next to the gate cautioned us against trying to visit the mazaar. It wasn’t just the dogs who would bother us, he said, there are chances that we might be possessed by the “resident spirit”. An itinerant food hawker said that the mazaar belonged to the locality, familiar only to those who knew the streets around the park. Sitting unobtrusively within the park, unaffected by the stand-off between archaeology and politics, the mazaar reminds us of the real energies that animate the old city. It is embedded within the locality in every sense; starkly unlike the grandiose statue of Bose, a figure prominent in histories of the anti-colonial movement but irrelevant to those who live close to the park.

Bose was missing for six years while the DMRC built tunnels underneath the park named after him. He wasn’t the park’s first incumbent. Before he appeared in the mid-1970s, the park was Edward Park; dominated by an equestrian state of Edward the VII, erected in 1922 as the new Imperial city established itself. After Independence, it was dismantled like other colonial-era statuary. In an improbable twist, however, Edward escaped being dumped in the north of the city and was instead dispatched as a civic gift to Toronto in 1969.

The park was divided and its three parts rechristened Netaji Subhash Park, Dangal Maidan and Urdu Park, honouring local heritages of the freedom struggle. Urdu Park was the arena for speeches by nationalists including a famous one by Maulana Azad on the August 1, 1942 to the Muslims of Delhi on the unity of India, and the madness of the idea of a partition.

The arrival of Bose, however, grafted a much broader nationalist history onto the park. Like the Swantantrata Sangram Sangrahalya and Swantantrata Senani Museums inside the Red Fort, the installation of Bose’s statue yokes excerpts from a national past to the Mughal spaces of the old city. Just as the British sought to legitimise their presence in India through visual associations with Mughal grandeur in the imperial architecture of New Delhi, the independent Indian state sought to re-tell Delhi’s many histories within a national frame. The Red Fort, to which Bose’s statue points, became a conspicuous theatre of Indian nationhood after the Indian National Army trials at the end of the Second World War. Nehru addressed independent India from its ramparts in August 1947, a tradition followed by every Prime Minister since. 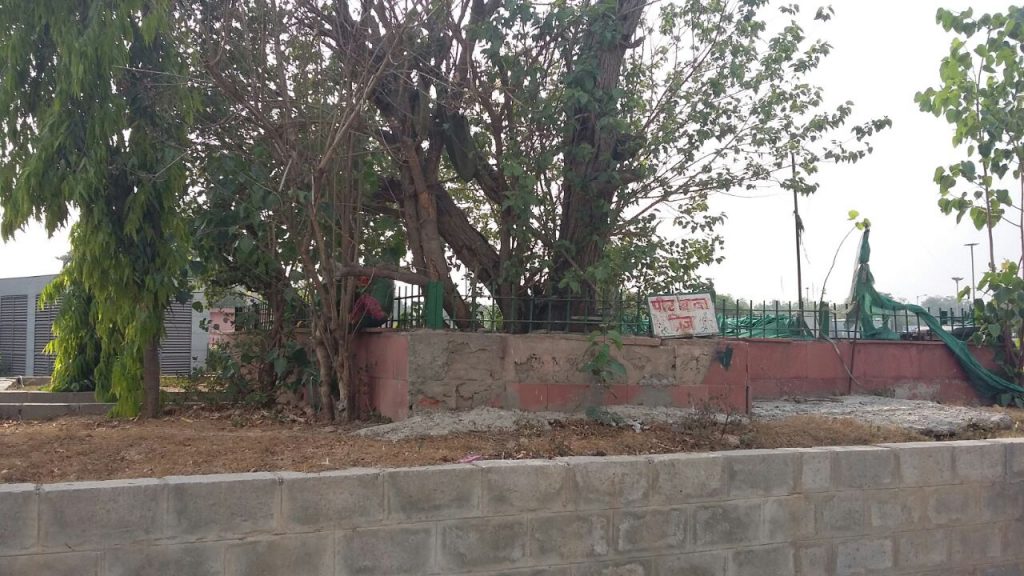 The spot inside the park where the mazaar is located. Credit: Special Arrangement

The re-purposing of local parks for the commemoration of nationalist history raises questions of whose past and, whose presents, the park should represent. The act of nationalist re-signification of this public space appears to be exclusive; accommodating neither the histories of the colonial nor the Mughal past. Bose’s reappearance on his gigantic new plinth evokes no particular interest among those who know the park well. On the other side, the statue of the park’s former resident, after whom the park was originally named, prompts many childhood memories. “We would eat ice -cream and then climb on to the statue and stroke its tail”, said an old resident. The creation of new childhood memories that would merge political commemoration with playful leisure is made impossible by the current state of the park.

While national appropriation of this park is monolithic, clunky and unfinished, local memory connects the Fort and the Park to other spaces of the Old City in far more profound ways. The Metro is a rather irrelevant set of tunnels for those make a living on the pavements around the park; a recent spike in Metro fares make it an unaffordable transport option for the people for whom the park is local.

The Metro did, however, bring a more significant submerged landscape to light. Locally, the discovery of Mughal era remains and pottery shards elicited excitement rather than surprise. The erstwhile existence of the Akbarbadi mosque was widely and popularly known. The red sandstone mosque, built in the 17th century by one of the wives of Shah Jahan, was destroyed by the British in the aftermath of the rebellion of 1857 who deemed it an impediment to the surveillance of the area around the Red Fort. The Akbarbadi mosque, local stories claim, was bigger than the Jama Masjid and was connected to the Red Fort by a series of underground tunnels that were used by the Emperor, his family and court officials. The Netaji Subhash Park is in a decrepit state today.

Locals who speak of the Akbarbadi Mosque are well aware of the dangers presented by those who manipulate the city’s past to spread hatred.

The discovery of the remains was quickly grabbed as political opportunity. Shoaib Iqbal, then MLA from Matia Mahal in the Old City, encouraged a crowd to offer prayers at the site in the summer of 2012, after a makeshift mosque was constructed on the spot.

The site was cleared, and a police post installed to protect the now politically sensitive remains. Six years on, no excavation has taken place. The ASI, in an unenviable position, is now buying time, delaying the excavation of the remains, and presumably aware that any official report, regardless of what it says, will be subjected to speculation and political opportunism.

The descriptions of the Akbarbadi mosque’s glories are tempered with a pragmatic understanding of present day politics: as wondrous as the mosque may have been, the matter was best left in official hands. No one, we were told, wants another Babri Masjid. The local, Muslim, historical imagination disciplines itself according to the realities, and potential violence, of the majoritarian present.

Today, the decrepit park hangs in a state of suspended animation between bureaucratic paralysis and political anxiety; and between Delhi’s past and present. The guarded remains and the dilapidated lawns and paths serve as a reminder of how poorly the prolific past and green spaces of the city, and those who might use them, are served by their official custodians.