Who is to Blame for the Tamil Nadu Water Crisis?

With permissions being granted for more and more houses to come up in Chennai by the day, the city’s water needs have been increasing without any checks.

One and half years ago, I was travelling with a friend through the Pallavaram-Pallikaranai Radial road. Just as we crossed the Pallavaram Lake, we saw large amounts of water gushing out into the lake’s drain canals. We were surprised and got off our vehicle to find out where the water was coming from. It turned out that the water was flowing out from a barricaded construction site. As we peeped in, we could see that huge motors had been engaged in pumping out the water from the grounds into these channels.

Today, a high-rise building can be seen standing on the site. Located just next to the lake and close to the Pallikaranai marshlands, the ground water table of the site was very high. As workers dug the ground for the project, they could probably see water at the surface level itself. This, ostensibly, did not allow either the digging or the construction work to continue. Hence, they had to pump all the water out to proceed with the construction. Today, this very high rise building has not been spared in the water crisis.

The city’s water needs have been increasing without any checks. Meanwhile, thanks to the Greater Chennai project, many parts of Kanchipuram district and Tiruvallur district are now part of greater Chennai. We see hundreds of advertisements of new residential projects coming up in various localities, all claiming to be Chennai Metropolitan Development Authority (CMDA) approved even though many of them are within the limits of Kanchipuram and Tiruvallur revenue districts.

Kanchipuram is historically known as a land of eris – tanks. The Central Ground Water Board under the Ministry of Water Resources identified 1,942 tanks in Kanchipuram district as on 2007. Tiruvallur district, also adjacent to Chennai, had 1,895 identified tanks, as on 2007.  The statistical handbook released by Kanchipuram district authorities in January 2019, notes that the number of tanks in the district remains at 1,942. However, many of these tanks have visibly turned into little more than dump yards for municipal waste. Many have been encroached upon with constructions. Others have been left unmaintained.

After the 2015 Chennai floods, many tanks were restored thanks to the strict measures taken by the then collector of Kanchipuram district, R. Gajalakshmi. Despite the encroachments and dumping, these tanks still have been a great way of preserving ground water. With a combined total of 3,837 (1,942 + 1,895) tanks around Chennai city and whatever remains of the Pallikaranai marsh within the city, the question as to why Chennai is still facing a water crisis begs to be asked.

Whenever there is a water crisis, people talk a lot about saving water, rainwater harvesting, desilting and maintaining water bodies. But the larger picture is never discussed. 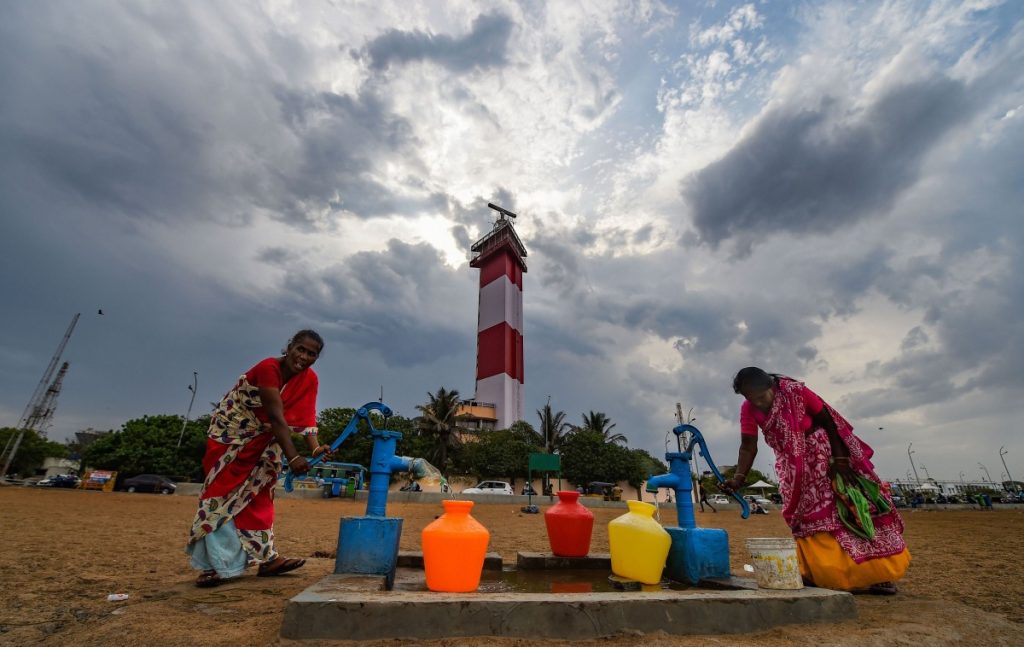 Residents fill their vessels with potable water from a hand pump at Marina beach, in Chennai on June 20. Photo: PTI

Chennai’s water crisis is not new and has been holding it ransom for nearly 50 years. The Palar river has been the oldest source of water for Chennai. Water from the Palar anicut is diverted to the Poondi reservoir and the Chembarambakkam lake, both of which act as major water supply points to Chennai. But with low rainfall on the Palar basin and with the expansion of Chennai city, resulting in an increase in its water needs, an agreement had been entered into in 1977 between Andhra Pradesh and Tamil Nadu to supply water of the Krishna river to Chennai.

This project was named the Telugu Ganga Project and was also known as the Krishna water supply project. Even before that, in 1967, a proposal to bring water all the way from Veeranam Lake, situated 235 km away from Chennai, had been proposed. But corruption and mishandling led to its eventual scraping.

In 2004, then Tamil Nadu chief minister J. Jayalalitha revived it with fresh infrastructural support. But with Veeranam Lake running dry most of the year, the steps have come to nought. The fate of the Telugu Ganga project, which is bolstered infrastructurally but has little practical use, is the same.

The water tables in sub-urban localities are still higher than in Chennai city. However, households in those localities too have been compelled to buy water. This is because many water supply companies have set up units there. They have dug very deep bore wells and have been using the water drawn with abandon. This has let the water table go lower than the level from which the borewells of individual households can draw water. A friend who lives in Madambakkam, on the outskirts of Chennai, she buys water from a supplier in the same locality for Rs 4,000 a month. The amount does not include drinking water.

An abundance of approvals

In the city, the corporation is the major supplier of water to government schools, offices and slums. But private residential apartments or people who have influence have replaced them on the priority list.

City planning does not only mean laying roads, constructing bridges and providing transport. It should understand the resources available and plan expansion accordingly.

In the five months from January to May 2019, the CMDA has given its approval to 65 layouts. In January alone, the CMDA approved 13 layouts with a total area of 99,206 square metres, divided into 526 plots. Forget about apartments, if just small, individual houses are built into these plots, there will be 526 more households.

Some satellite images of the ongoing water crisis in #Chennai, #India courtesy of @Maxar. No significant relief during the SW monsoon; climate models not optimistic for the NE monsoon in boreal #autumn either. pic.twitter.com/SLwWMgVNEJ

Water consumption per day per person will amount to at least:

This is only for the approvals given in a single month and also assuming each plot is going to be inhabited by only one household and not built as an apartment.

This also does not include water needed for construction, which is a huge volume by itself.

If the CMDA continues to give approval at this rate, how can we not expect a water crisis?

Also read: Why All Eyes Are on the Indian Monsoon

The idea in the real estate market is that the field has not been faring well for the past two years. Times of India had reported in January 2018 that the Chennai residential market had enough inventory to sell over the next 18 months.

By December 2018, Economic Times had reported that there was a huge fall in the sales of residential units. Yet with so many units yet unsold, the CMDA continues to give approval to newer ones.

Further, the problem of migration has to be understood and addressed in a long-run perspective. During festivals, all Chennai roads are visibly empty as a large part of the city’s population are migrants who have their roots elsewhere. More and more people migrate from within Tamil Nadu and from other states to Chennai. Chennai natives, meanwhile, complain of having been uprooted and placed on the outskirts, in areas like Kannagi Nagar, Chemmancheri and Perumbakkam.

The government should also take a policy decision to not to approve any more industries or business enterprises in the city. Concentrating industrial development in the city has made living in it a disaster.

The United Nations General Assembly on July 28, 2010, recognised that the human right to water entitles everyone to “sufficient, safe, acceptable, physically accessible and affordable water for personal and domestic uses.” This right has not been explicitly protected in the Constitution of India, though the courts have interpreted the right to life to include safe and sufficient water.

Today, however, governments leave it to individuals to solve the water crisis, which has led to fragmented solutions and made water available only to those who can afford it.

We must understand that water crisis is not just about water but that it is a socio-economic, political and environmental issue.