The city has not as yet conducted a serious study of the ways in which the reclaimed coastline and its road will interact with heavy monsoon rains and rising high tides.

Much of Mumbai rests only a few meters above sea level. Credit: Nikhil Anand) 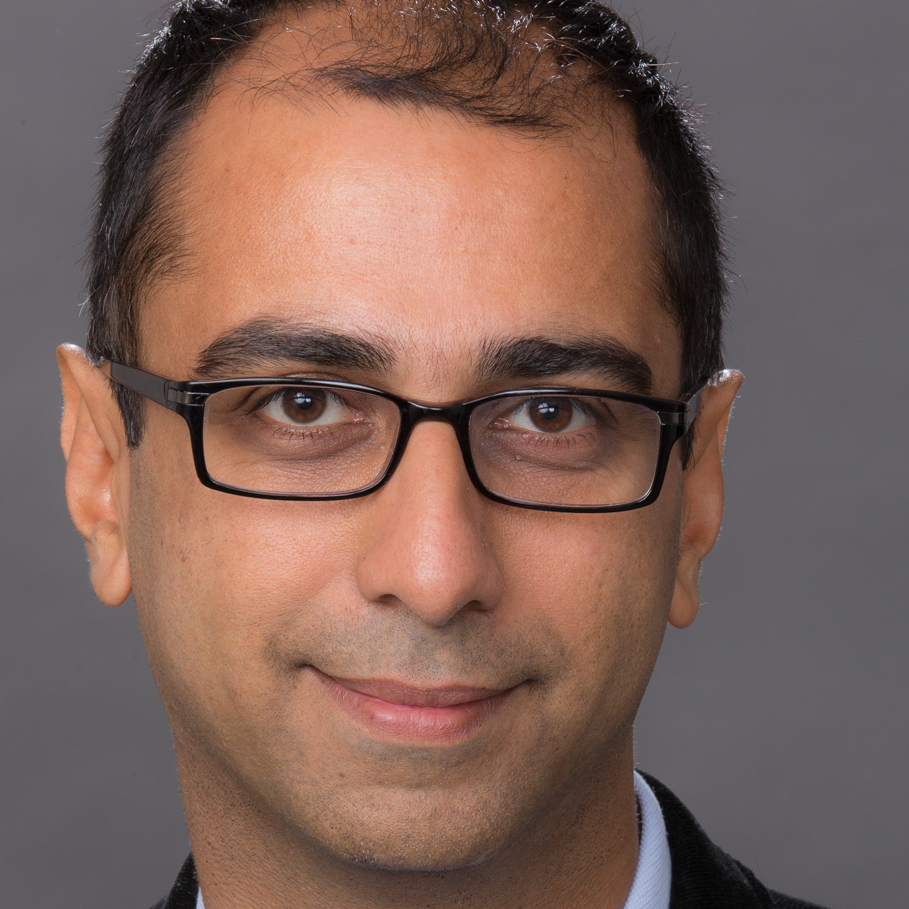 This was just the most recent in a series of now normal superstorms and floods that have ravaged coastal cities like Chennai, New Orleans, Mumbai, New York City, Jakarta, Beira over the last two decades.

As the list of cities reeling from catastrophic floods gets longer, urban planners wonder – where will disaster strike next and what can be done about it?

Writing after Hurricane Katrina, which destroyed over 70% of the city of New Orleans in 2005, Neil Smith insisted that “there is no such thing as a natural disaster”. Disasters, he argued, were the results not just of wind and rains, but the ways in which these interact with urban policy, infrastructure and social vulnerability.

Disasters are created by negligence towards the social and natural contexts of large infrastructure projects. As Mumbai dramatically changes its coastline with the construction of a Rs 12,000-crore coastal road project, a careful review of the project documents suggests that the city may be involved in constructing a massive, not-so-natural disaster in the not too distant future. 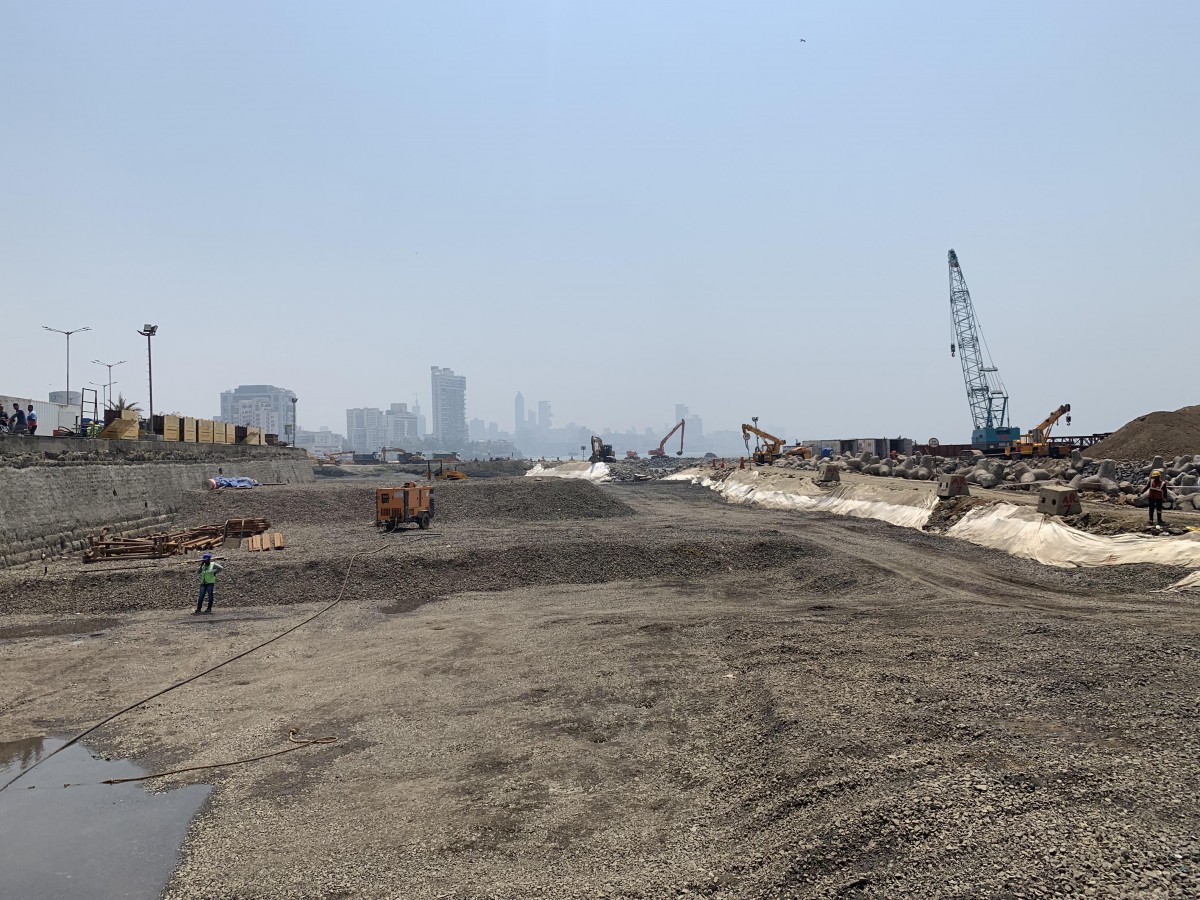 The first phase the Mumbai Coastal Road Project, stretching from Marine Drive to Worli, proposes to fill in a total of 90 hectares of land into the sea. On this landfill (also called reclamation), the city proposes, not just to build a road, but also car parking structures, jogging tracks, a bus depot and other amenities.

Built on the coastline, at the interface of land and sea, the landfill will be constructed six meters above the sea level, and will call for the modification of storm water infrastructures that currently empty into the sea. These networks are an important part of the partly functional flood control system of the city.

Yet despite the ways in which Mumbai is already extremely vulnerable to flooding, the city has not as yet conducted a serious study of the ways in which the reclaimed coastline and its road will interact with heavy monsoon rains and rising high tides. Will the coastal road, once complete, exacerbate urban flooding with heavier rains and the displaced, rising sea?

As residents in Mumbai have long known, the city regularly floods when heavy rain showers occur during high tides in the monsoon months. This knowledge is now also amply evident in government reports. For example, a TERI Environmental Status Report, commissioned by the MMRDA in 2015, finds that water logging in the region “is essentially a compounded impact of heavy rainfall and high tides together”.

The 2006 Flood Fact Finding report of the Maharashtra State Government, pointed out floods ensue when “moderate intensity rainfall takes place close to the high tide period”. Finally, the Environmental Impact Assessment of the Coastal Road Project itself stated, “The problem of flooding is acute when heavy rainfall coincides with high tide”, which according to the report is approximately 20 times every monsoon. “If the rain intensity is more than 25 mm per hour and high tide occurs, there is always a possibility of flooding” (Coastal Road Drainage Report).

Yet these reports only detail the present vulnerability of the city to floods. According to a World Bank white paper (2008), the city will experience ever more frequent and intense floods in the near future with climate change. The number of days of intense rainfall in Mumbai have already increased in line with the climate change predictions. 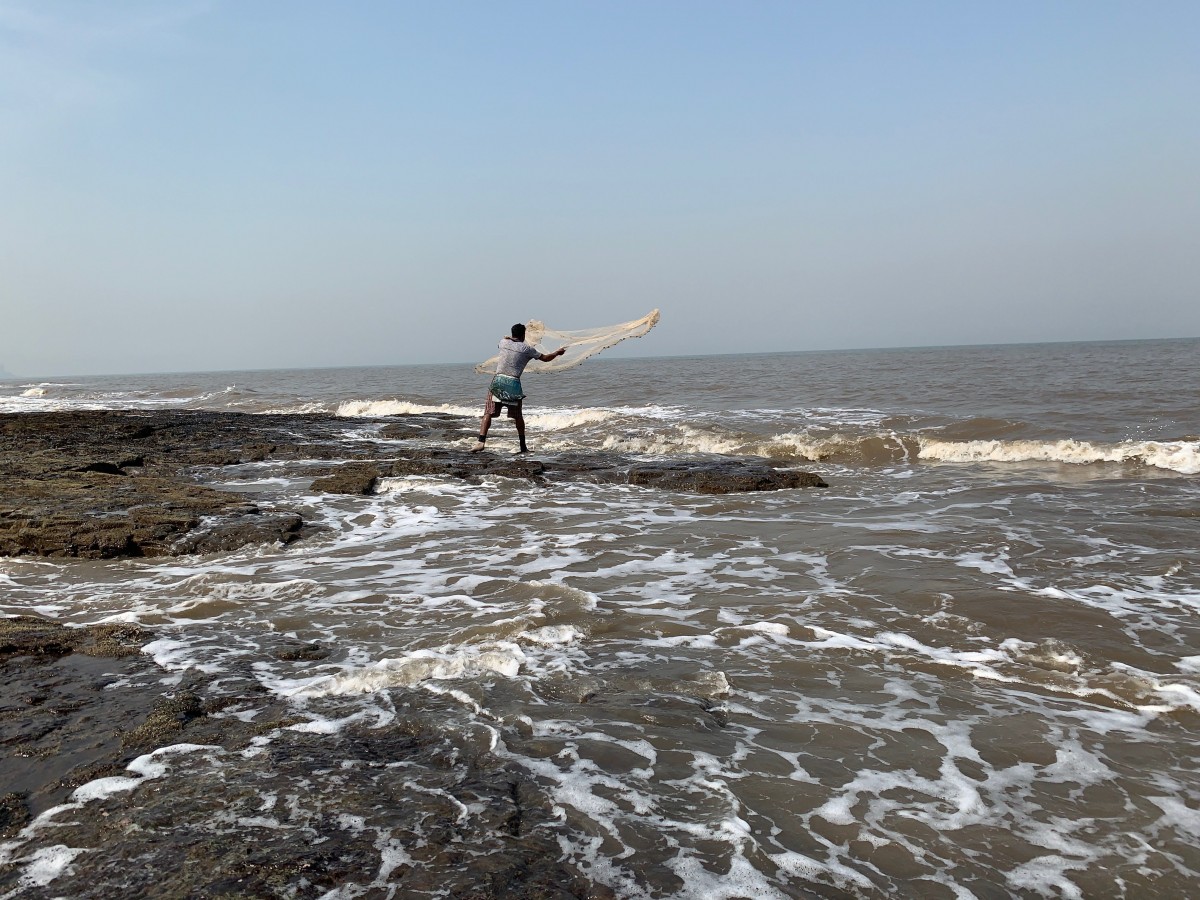 There is also ample evidence now that the high tides will be higher owing to an accelerating sea level rise caused by rising sea surface temperatures and melting polar ice. The Arabian Sea is already warmer by 1 degree centigrade. As per the National Institute for Oceanography, mean sea level rise on the western coast of India was just over 1 mm/ year for most of the 20th century.

Yet, as per the most recent IPCC report, global sea level rise is accelerating and will likely increase by between 400 and 800 mm by 2100. While this number may seem small, it adds a significant punch to storm surges. With temperatures rising faster than the more conservative estimates of the IPCC reports, the Coastal Road EIA suggests that “the city of Mumbai needs to prepare itself against any natural calamities likely to occur in future”. Less clear in that document, however, is how the road, to be built on landfill, may either assist or impede these preparations.

Also Read: The Coastal Road is an Expensive Mistake Mumbai Should Avoid

Landfill has, on one hand, produced significant ground for Mumbai in the last 200 years. Yet, with climate change, the city cannot continue to reclaim land, because, as several government reports have also documented, reclamation also makes the city vulnerable to flooding. For instance, the Coastal Road DPR points out that reclamations of the Mithi River and Mahim exacerbated the Mumbai floods of 2005.

Today, “there are 40 chronic flooding locations… that are spread over the island city, eastern and western suburbs”. Many of these locations are located on reclaimed land. With sea level rise and intensified rainfall, we can expect there to be significantly more locations to develop in the future. Climate change, apart from being an environmental issue, is an urban issue, where it produces increased vulnerability to large scale flooding and disaster, that will affect the lives of many, if not most city residents.

This is why the city needs to carefully evaluate whether new infrastructure projects will make the city even more vulnerable to flooding. Unfortunately, the reports commissioned by the MCGM for the coastal road project have not done this work. Instead of assessing the impacts of the road on the urban environment, MCGM studies are focused on the impact of the urban environment on the road. 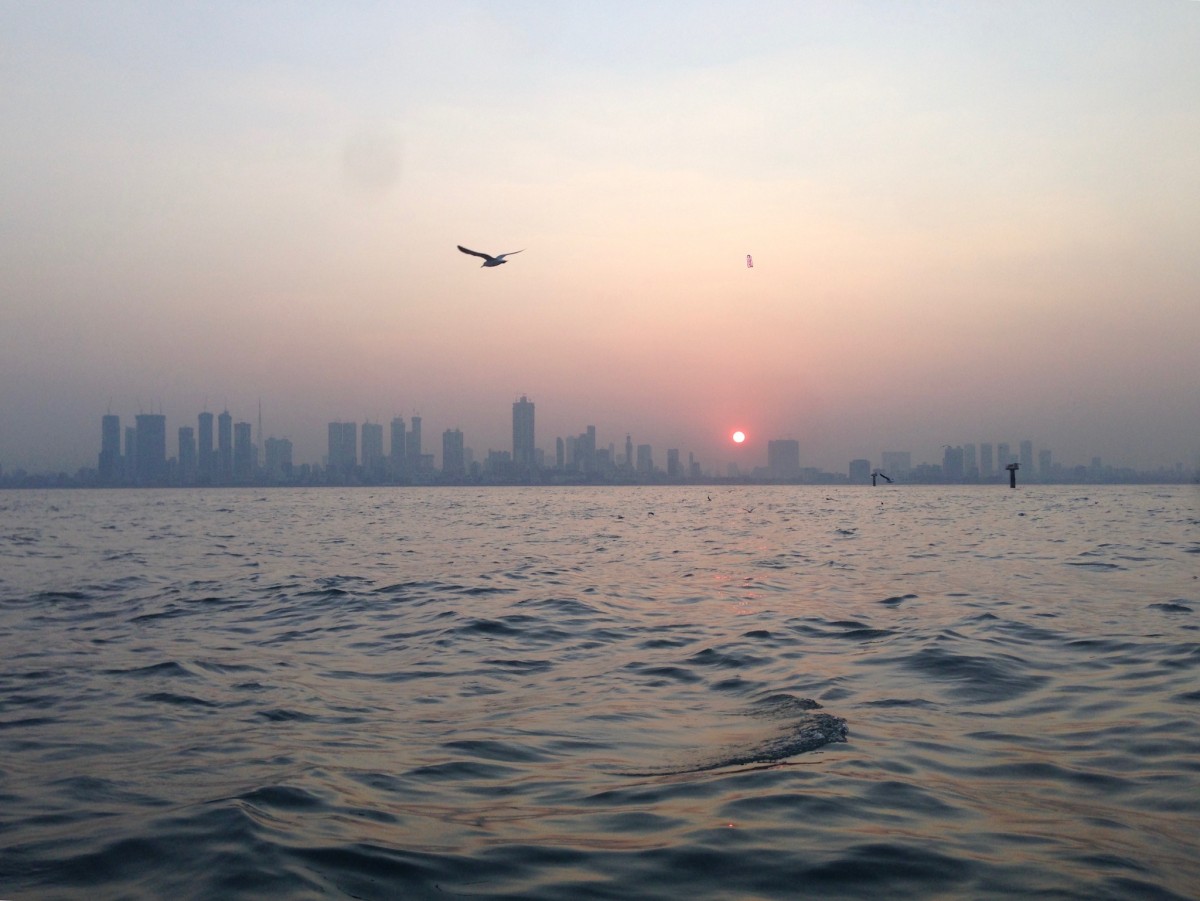 For instance, to address rising sea levels and storm surges, the road is proposed to be constructed higher at 6 meters above sea level. This, combined with regular resurfacing, is supposed to ensure that the probability of flooding of the Coastal Road remains low (Risk Assessment and Disaster Management Plan). While many of the measures listed in project documents may reduce the risk of the road flooding, the road may increase the problems of flooding in adjacent low-lying areas.

We don’t know. This is because the BMC has, to date, not conducted a single integrated study exploring how the road will interact with the rough seas and rain every monsoon. The Disaster Management Plan does not investigate the impact of the road on low lying neighbourhoods. To be sure, MCGM has commissioned a hastily conducted drainage study, and also a separate study of storm surges, tides and tsunamis conducted by a different agency.

But flooding events ensue when drainage and wave action interact. Neither study has explored the relationship between road, rain, drainage and sea. Thus, the study on storm surges examines sea level rise, but does not account for the intensification of rainfall in its models. Rain is not even mentioned in its report. 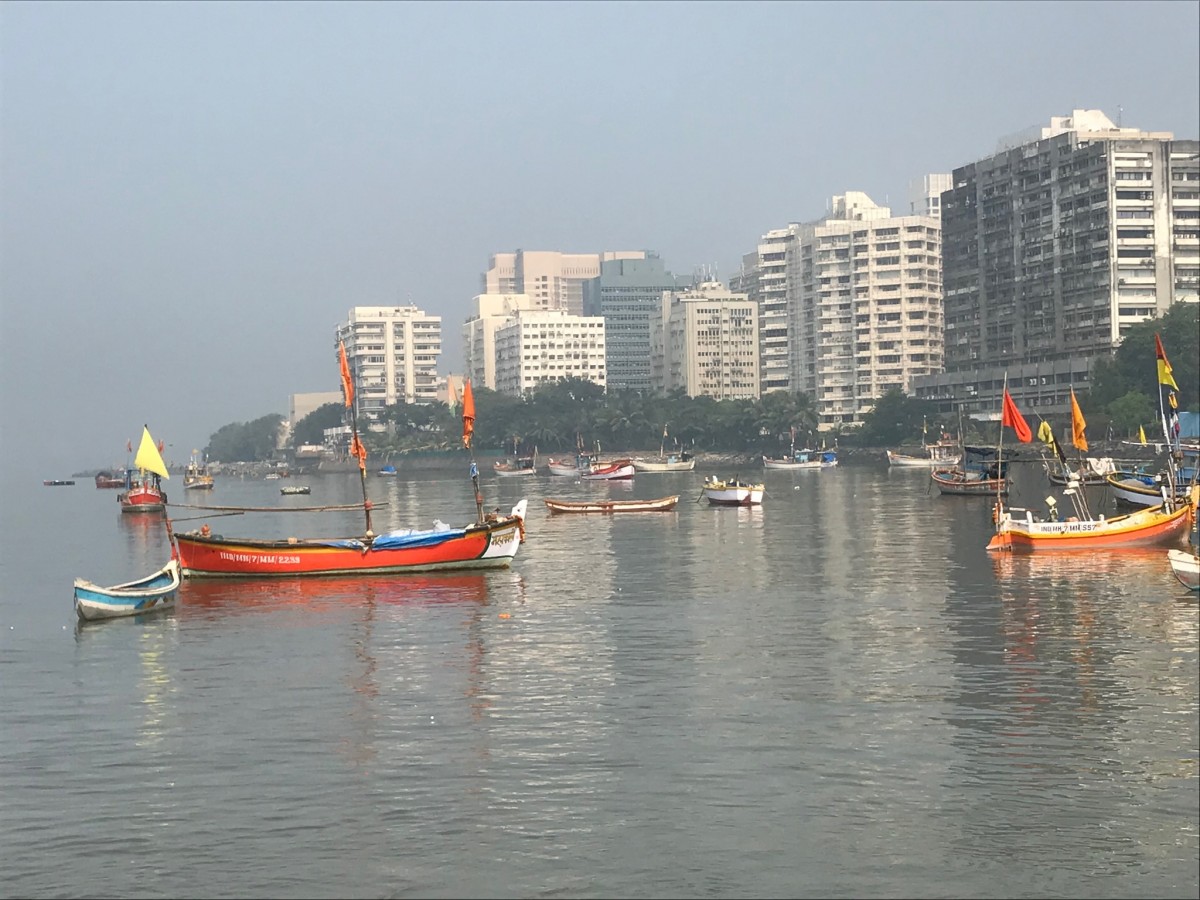 Backbay reclamation, Mumbai. Will the sea be as forgiving of reclamation in the next two centuries as it has over the last two hundred years? Credit: Nikhil Anand

The Drainage Report tacitly acknowledges that storm water drains are not very functional at high tide. Then, it goes on to account for rainfall intensity, but does not account for tides or sea level rise upon which drainage depends. Based on study terms set out by the BMC, both reports produce an incomplete and dangerous understanding of the city’s urban ecology. Both reports ignore the effect of intense rains on a city in a sea. With its partial blindness emerging from its determination to build a road, the BMC is ignoring how it may also be building conditions for a flood.

Experts agree that increased likelihood of extreme weather events associated with climate change today make Mumbai one of the riskiest cities to inhabit in the world. The city needs to urgently rethink and put in place not just disaster management plans, but infrastructures that reduce the city’s exposure to these risks. Today, however, the city is doing less than nothing to address its ecological and social vulnerabilities to climate change, storm surges and flooding.

By radically altering the city’s coastline through reclamation and infrastructure construction without even so much as examining and addressing the impacts of this project on an intensification of urban flooding in the future, it is actively being engaged in the long-term production of a “natural” disaster.

Nikhil Anand is a scholar of infrastructure, urbanism and environment currently researching climate change, the sea and the city. He is the author of two books, Hydraulic City (2017) and The Promise of Infrastructure (2018).