The office of Sarada Mayer Bari, the residence of Sarada Devi – the wife of 19th century spiritual thinker Ramakrishna, was severely damaged as well. 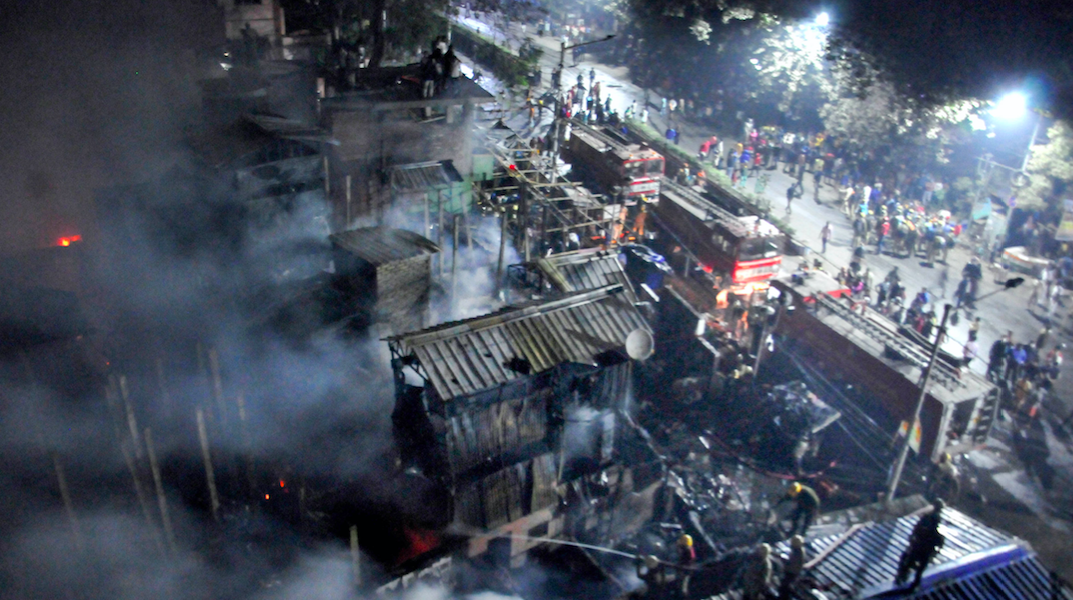 Smoke billows from a slum area after fire broke out in it, at Bagbazar in Kolkata, Wednesday, January 13, 2021. Photo: PTI

Kolkata: A massive fire in north Kolkata’s Bagbazar area on Wednesday evening destroyed the makeshift houses of hundreds of people, leaving them homeless in the winter.

Twenty-seven fire tenders took around four hours to control the blaze that broke out around 6.55 pm in the Hazari slum. Wind blowing in from the Ganga could also have spread the fire, local media has speculated.

The area is one of the city’s oldest and is densely populated. While the whole slum has been turned into ashes, reducing nearly 40 families to homelessness, there are no reports of casualties or injuries as people had been evacuated on time.

PTI reported officials as having said that the initial fire – likely caused by a short circuit – was exacerbated by gas cylinder blasts in successive houses which caused the fire to spread. Among buildings adjacent to the slum that were destroyed are the heritage Sarada Mayer Bari and a godown of books.

The office of Sarada Mayer Bari, the residence of Sarada Devi – the wife of 19th century spiritual thinker Ramakrishna, was severely damaged in the fire as police rescued four or five monks stuck inside, a Kolkata police officer told PTI.

“A probe into the mishap will soon be initiated,” he said.

Locals have alleged that firefighters reached the spot at least an hour late, because of which the blaze went out of control.

A couple of police vehicles were vandalised, following which a team of the Rapid Action Force (RAF) was deployed at the scene.

The horrific scene of the fire at Bagbazar was heartbreaking. Somehow rushed to the spot in a hurry from Ganga Sagar. Our brave firefighters are working selflessly to curb the fire & we have arranged for makeshift camps for the residents pic.twitter.com/mLeMRe99r7

Traffic in central and north Kolkata had been severely affected due to the fire but resumed normalcy by Thursday morning.