The NBCC's role as the main investor, the project management consultant and the implementer of projects, all rolled into one, means that there is no oversight whatsoever. This week, two big cases, both against “government housing” projects of the Ministry of Housing and Urban Affairs and implemented by NBCC, a public sector corporation under the ministry, will be heard in the Delhi high court.

The NBCC’s “model” East Kidwai Nagar (EKN) project is in the docks for completing construction of 4,840 housing units and over 10 million square feet of space without proper traffic assessments and water supply approvals. The second case is of the commercial development of a World Trade Centre at Nauroji Nagar, one of the sites for the redevelopment of seven government housing colonies (called 7GPRA here).

Both these cases are crucial to the future of urban development and the treatment of public assets of Delhi. They will take stock of the dodgy assessments that earned these projects multiple government approvals. More importantly, complaints have been filed against 7GPRA for continuing construction-related activities despite a high court order on October 3, 2018 that sent six of these projects back to the drawing board.

Throughout the protests against 7GPRA and the case proceedings, the project designs remained shrouded in secrecy, even though the amicus curiae asked to see them. When the court ordered NBCC to redesign the project, NBCC merely reduced the number of government housing units and thereby the loss of standing trees.

Beyond the questions that these cases raise, there are reasons to worry about the Central government’s methods of operationalising urban projects in many Indian cities.

Firstly, urban redevelopment seems to be a foregone conclusion. It is seen as necessary for multiple objectives of urban governments – densification, agglomeration, environmental sustainability and social inclusiveness. As minister for housing and urban affairs Hardeep Puri likes to remind us, “Between now and 2030, we will have to build something like 700-900 million square meters of urban space every year.”

Also read: Is There a Method to Delhi’s Re-Developmental Madness?

But if redevelopment is indeed as important as it is made out to be, the task of turning vision into reality ought to be set right. In India, there are at least 27 Central PSUs in the construction and consultancy sector, besides many private players. But the ministry has allowed one company, the NBCC, to monopolise Delhi’s redevelopment projects.

Incorporated in 1960, and given PSU status in 2008, today the NBCC is a construction firm listed on the BSE and NSE. After dabbling with various real estate projects, it has finally made redevelopment its core business.

According to M.M. Sharma, a legal expert on anti-trust and competition law, NBCC’s “nomination” for implementing redevelopment projects is illegal as it blurs the distinction between public works organisations (PWOs), like the Border Roads Organisation and Central Public Works Department, and PSUs.

He explains, PWOs are ‘no profit-no loss’ organisations whose stringent financial execution is governed by government rules. PSUs, on the other hand, are independent legal entities working on commercial principles and profit-making objectives. Preferential treatment that NBCC enjoys violates the 2008 Supreme Court judgement in Caterpillar India Pvt Ltd vs Western Coalfield Ltd and Others.

Secondly, as per the amendment to the clause 126 (3) of the General Financial Rule, 2005, ministries “should ensure competition among such PSUs/organisations…essentially on the lump sum service charges to be claimed for execution of work.”

Sharma notes that such practices lead to cost escalations, lack of quality control and no oversight of privileges extended to the PSU and further to undeserving contractors. His articles (here and here) from 2017 point to the “deliberate avoidance of competitive bidding and continued purchase preference.” He urges the Central Vigilance Commission and Competition Commission of India to investigate the “PWO scam” in this sector of public procurement and public works that constitutes 30% of the country’s GDP.

This echoes the recent observation of the editor of Swarajya magazine, “a big tent for liberal right of centre discourse”. He recently wrote about the regulatory capture in the realty sector and stated that the GST and duties-related cuts being offered by the Central government to the construction sector would only enhance “the profitability of the builder-politician-bureaucrat conglomerate”.

NBCC’s “redevelopment” projects in Delhi have been a blessing from the Ministry of Housing and Urban Affairs and the DDA. The Delhi Master Plan allows redevelopment projects to build 50% more than the maximum permitted floor area ratio (FAR) up to a limit of 400 (barring areas under Transit Oriented Development norms) to “incentivise redevelopment”.

When the Master Plan was amended in 2015, the earlier clause that allowed redevelopment projects to have a commercial component of “up to 10%” was changed it to “minimum 10%”. DDA’s permissiveness to maximise commercial land use given Delhi residents’ struggles for affordable housing and safe living spaces is extremely unjust.

The arrangement between NBCC and the ministry on building projects such as the 7GPRA is that NBCC invests its funds upfront and charges the ministry an interest of 12%. For EKN, the interest rate was 15%. The ministry is to repay this through the sale of commercial space built in these projects.

NBCC also offers ministry projects a range of services, from design to construction supervision for a fee. It charged 8% of total project cost for 7GPRA and 10% for EKN. According to a practising architect, at these rates one should expect a “Taj-like property” to be delivered. Instead NBCC has produced vertical slums made up of poorly designed repetitive building blocks.

Finally, NBCC also implements these projects. The company’s role as the main investor, the project management consultant and the implementer of the project, all rolled into one, means that there is no oversight or checks whatsoever. Anticipating such criticism, NBCC engages a third party referee for its projects too.

For both EKN and 7GPRA, NBCC is governed by flimsy MoUs that have no qualitative parameters for delivering a good project. They are ridden with open clauses on time and money. As observed by members of Citizens Alliance (CA), a publicly engaged group of professionals, such MoUs have no bottom limit.

Since one of the clauses of the MoU states that the actual number of houses to be built may vary, the NBCC will make money even if they don’t deliver a single house as long as they maximise the commercial parts of the project. As CA has noted, these projects are for the “enrichment from government land to contractors at cost of the environment and citizenry”. 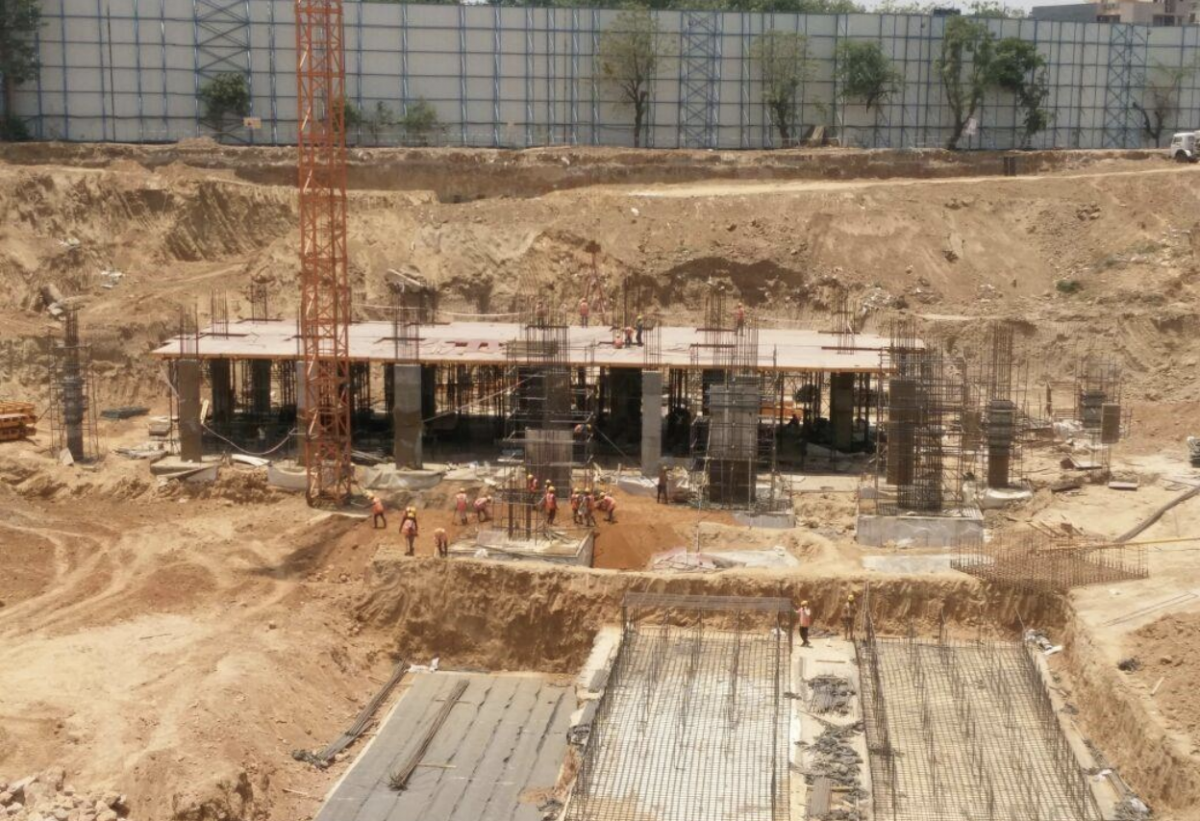 Together, NBCC and the ministry see these redevelopment projects as a cash cow. Policy changes and illegal government practices have created the space for the unaccountable financialisation of public assets. This modus operandi offers maximum benefits to the company.

An assessment of NBCC by IDBI Capital in 2016 states that the “sovereign backing” enjoyed by the company provides them a superior business model. It is no wonder that the company is looking to grab the remaining government colonies in Delhi and in other cities. Yet, its market reputation does not match up.

In 2016, the government owned 90% of the company shares and divestment has been on the cards. As of 2017, it divested 15% of its share capital in the company. The only mutual fund that has purchased 3.18% of government holding in NBCC in December 2018 is Reliance Nippon. While the NBCC has been boasting of its advantages to the market, the same seems to come in the way of it attracting more capital. In recent months, its share value has nosedived much against the expectations of the company.

In 2016, the Indian Institute of Architects (IIA) filed a case against NBCC’s tendering process for the redevelopment of Pragati Maidan. The charge made by IIA was that NBCC allowed engineering consultants to bid for work even though the bid was for “comprehensive architectural services”. IIA claimed that NBCC thus altered the definition of the services, going against 2(1)(xii) of the Architects (Professional Conduct) Regulations, 1989.

In this case, case law on favouritism and arbitrariness in contractual matters was invoked to test NBCC’s decision in allowing engineering firms to bid. However, these same standards imposed by earlier judgments could also be used to question the government’s “discretion” in nominating NBCC itself to implement redevelopment projects. The IIA case clearly shows that the effects of top-level discretion flow down to how decisions on tendering and contracts are made in these projects.

Also read: Every City Deserves a Vocal Art Commission to Ensure the Aesthetic of Public Spaces

Another allegation made in this case was that NBCC engaged the services of foreign architects and this is in contravention of the provisions of Section 37(1) of the Architects Act, 1972. The court shot down this charge, stating that the chosen architects were shortlisted by the Indian Trade Promotion Organisation. The IIA’s legal challenge to NBCC’s decisions was not successful, but the legacy of bad practice has now caught up with their EKN and 7GPRA projects in court.

The EKN was designed and implemented by Chapman Taylor, an international firm. The project won a “5 star award” for “Best Public Service Architecture in India” at the 2017-18 Asia- Pacific Property Awards. Their website says that this key project is a “template for other Smart Cities”. The Ministry of Housing and Urban Affair’s Smart City Mission Statement of 2015 mirrors this view. Chapman Taylor did the traffic assessments for the EKN project. As per this assessment, the existing capacity utilisation of the roads in the evenings was 20-27%. Their report of April 2012 sums up that “traffic volumes on most links of road network in the vicinity presently function at below saturation levels during AM and PM peak hours.” The report carries photos of nearly empty roads around the project site.

Their assessments have raised a big question on the tall claims of the project. Under orders of the court, traffic experts professor Geetam Tiwari and her team from IIT, Delhi gave an independent view of the traffic burden of EKN in October 2018. It now seems that Chapman Taylor’s assessments may have “underestimated” the traffic circulation patterns based on 2010 figures, misleading the government into granting approvals to the project.

Even as we wait for the verdict on EKN and GRPA, NBCC has already launched Ayur Nagar, in the vicinity of EKN and 7GPRA, and several other projects. NBCC is also in charge of building a posh new 30-storeyed office for SDMC. DDA called for a public hearing to discuss this project well after the project was finalised.

These ways of implementing urban development run counter to the many grand objectives of the Smart City Mission of this government, such as promoting housing, inclusiveness, walkable localities, open spaces and less congestion and pollution. The Mission aims to target 100 cities by 2020. If urban redevelopment is monopolised, the risks to the public are far beyond financial losses. The opportunity to remake urban spaces for the future is lost for a long time.