How a Chartered Plane Crashed in Suburban Mumbai

Ghatkopar, where the crash occurred, is only a few kilometres from the domestic airport. The fear of crashes looms large in this area which has several high rises built in close proximity. National Disaster Response Force officials worked in tandem with the Directorate General of Civil Aviation at the crash site. The 'black- box' was recovered soon after and has been sent for investigations. Credit: Ruchira Petkar

Mumbai: It had been just a few minutes that security guard Samsher Khan had stepped out to have tea at a local tea stall outside the Old Malik Estate construction site. What he saw from the distance, Khan says, he will never be able to come to terms with. “A huge plane came down crashing at the place I have been working for months. There was a deafening sound, almost like a blast – and in no time, the site caught fire,” Khan narrates.

The King Air C90 12-seater aircraft had crashed into a construction sire in Jeev Daya lane near a telephone exchange in the busy suburban area in Ghatkopar, Mumbai. All four – Maria Kuber, the pilot in-charge, Pradip Rajput, her co-pilot, Manish Pandey, the aircraft technician and Surabhi, a mechanical engineer – on board were charred to death. A pedestrian too died in the mishap. He was identified as Govind Pandit.

After the initial few minutes of shock, as Khan returned to his senses, he said he inquired about the 50 odd workers at the site. They had, just a few minutes before the crash, stepped out for lunch. “At 1 pm, everyone goes out for lunch and returns only around 2 pm. The crash happened around 1:10 pm,” Khan said. Three persons, who were still at the site have suffered burn injuries and are being treated at the municipal corporation-run Rajawadi Hospital in Ghatkopar. Vidya Thakur, the medical superintendent at the hospital confirmed that their conditions are stable, although all three have sustained burn injuries. “One of them has severe burn injuries on the face and other two, on their limbs. We are monitoring their condition. They are out of danger,” Dr Thakur told The Wire. Bodies of the five deceased have been sent for post mortem. 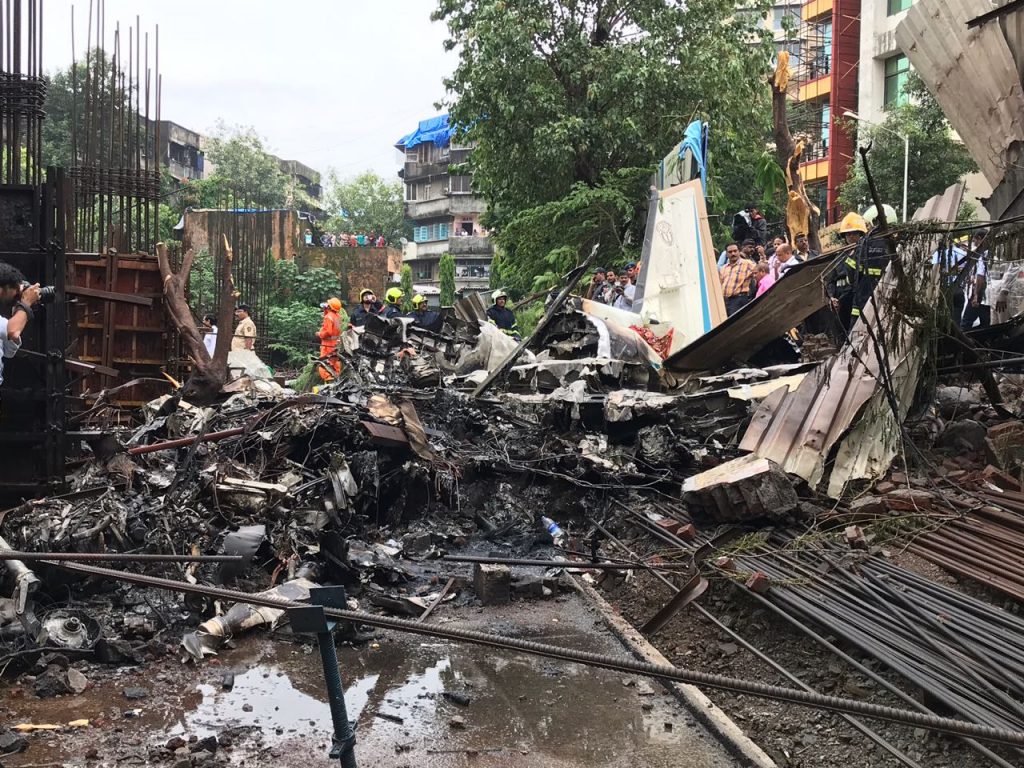 Debris at the crash site. Five bodies, all charred, were recovered from the site. Credit: Ruchira Petkar

The crashed plane was on a test flight and had flown only a few minutes ago from the nearby Juhu airstrip. Sources in the Directorate General of Civil Aviation (DGCA) confirmed that the flight had taken off after all the monitoring and security checks. “The reasons for the crash is yet to be ascertained. But preliminary inquiry shows it was not due to bad weather. We have recovered the “black box” from the crash site. On investigating and on analysing the final signals sent by the pilot to the Air Traffic Control, we would be able to ascertain the cause for the crash,” a senior officer told The Wire.

The DGCA had sent its team of officers for preliminary investigation to the spot as soon as the news of the crash broke out. A team from the National Disaster Response Force too was at the site to aid the DGCA in the investigation and ensure no one was crushed under the debris. 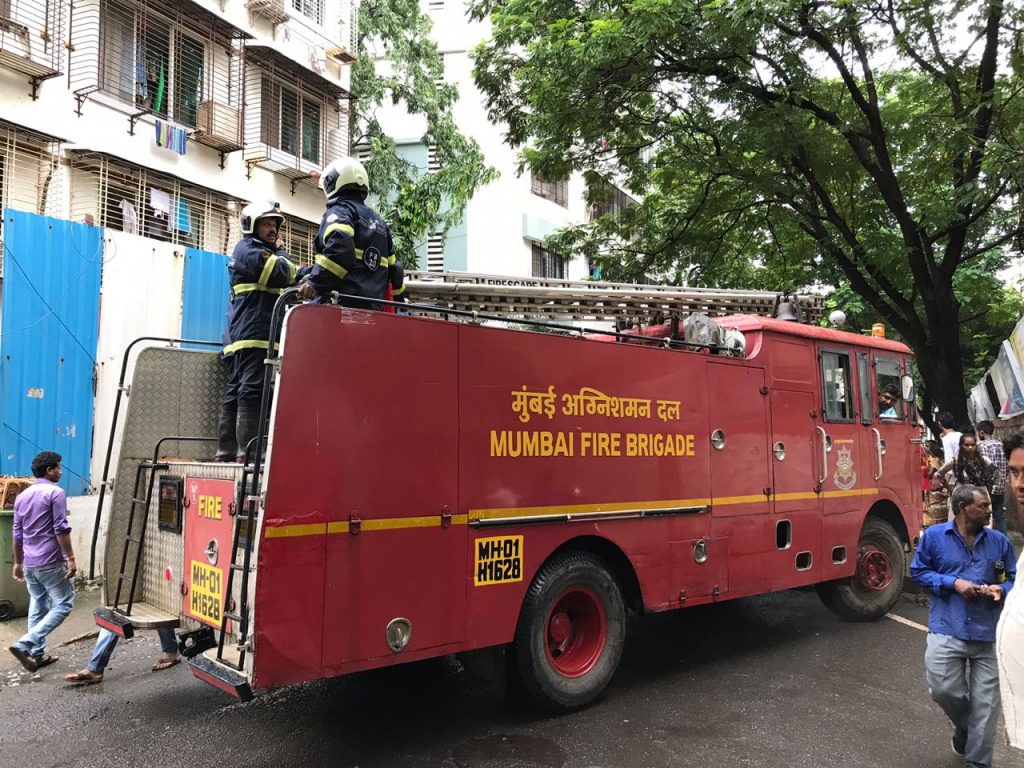 Two fire engines were rushed to the spot at 1:30 pm soon after the plane crashed. Officials claim that a mishap of much larger scale was averted since the flight clashed at an open space. Credit: Ruchira Petkar

Ghatkopar, where the crash occurred, is only a few kilometres from the domestic airport. Residents here are used to aircraft movements. But the fear of crash also looms large in this area which has several high rises built in close proximity. Shailaja Pai, a 35- year-old resident of a nearby building said she ran out of her flat on the tenth floor in a 12- storey apartment thinking there was a bomb blast. “There was smoke and fire all around. I thought it was a blast in the building. I ran down in panic. Aircraft hover around our buildings day and night. It is scary,” Pai said. The Height Restrictions (For Safeguarding of Aircraft Operations) Rules, 2015 have a clear norm and restrict construction of high rises around the airport. But the norms have been openly flouted.

Amid panic, there were also several labourers who heaved a sigh of relief. Today (June 28), around 50 of them had come to work for their 12-hour long shift. Most of them, like Omprakash Prajapati, a carpenter, work and live here. “Fifteen of us joined here two weeks ago. The contractor had given us both work and a place to live. Almost all of us are migrants, who have come to the city for work. Now with this accident, we don’t know if our work will be affected and if we will have a place to stay. But we are only glad to be alive,” Prajapati said. 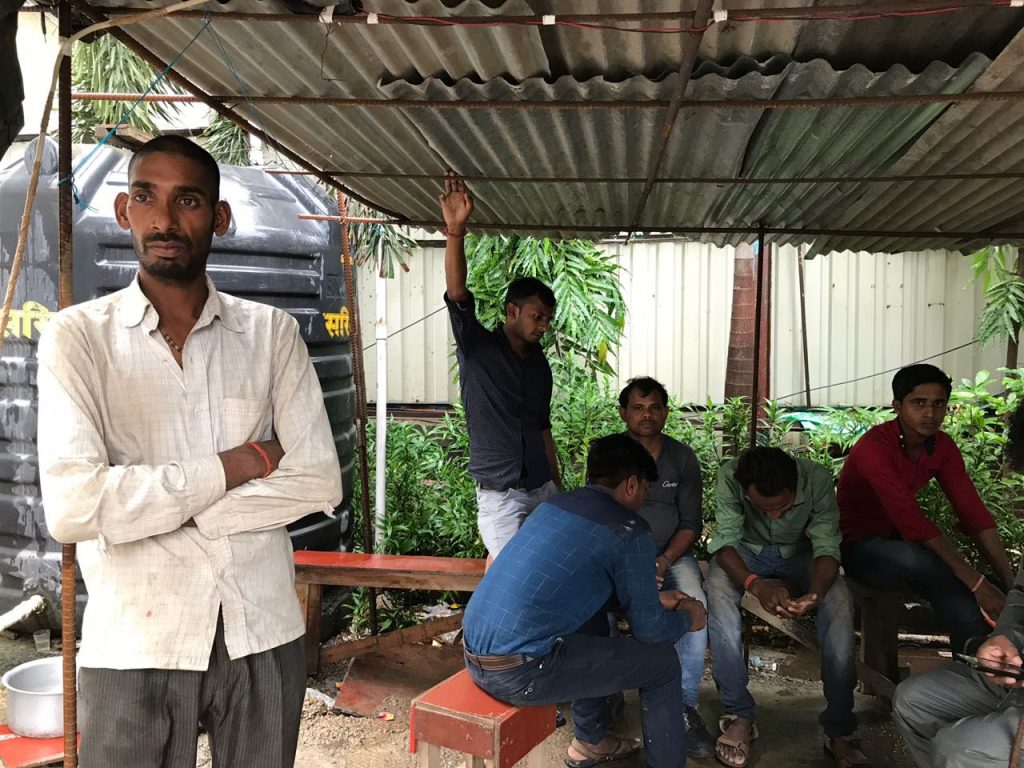 Omprakash Prajapati is one of the 50 odd labourers who worked at the Old Malik Estate construction site where a 12- seater airplane crashed today. Five persons including four on board and a pedestrian were killed in the mishap. Credit: Ruchira Petkar

Another security guard Keshnath Tiwari in the adjoining building has been on his feet since the accident occurred, helping relief workers at the site. He too narrated the story of his escape and told The Wire that the casualty would have been much higher if not for the lunch break.

According to the DGCA and also what former aviation minister Praful Patel had posted on social media, the pilot Kuber had averted a much bigger accident by diverting the plane into an open space just before the crash. According to officials, this call by Kuber was a sign of great presence of mind and courage even at the end of her life. Maria Kuber (48), a resident of Allahabad in Uttar Pradesh had over 1,000 hours of flying experience. Her husband Prabhat Katuriya has alleged that the flight was put on test drive even when the weather was not conducive. Speaking to the media from Rajawadi Hospital, Katuriya claimed that his wife and the others lost their lives because of the wrong decision by the officials. 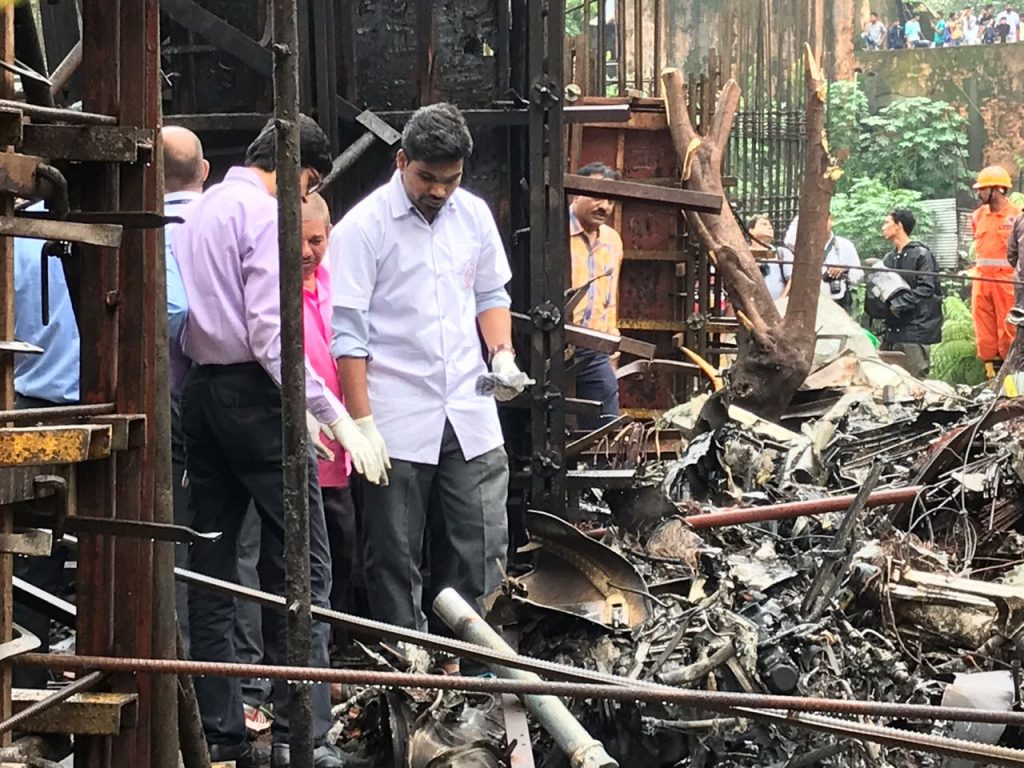 Two fire engines were rushed to the spot at 1:30 pm soon after the plane crashed. Officials claim that a mishap of much larger scale was averted since the flight clashed at an open space. Credit: Ruchira Petkar

Since the flight bore the logo of the Uttar Pradesh government, it was initially assumed that the flight belonged to UP. But later, principal secretary (Information) Awanish Awasthi clarified that the flight was initially owned by the UP government and was bought by Mumbai’s UY aviation. Awasthi told the news agency ANI: “The chartered plane which has crashed (in Mumbai’s Ghatkopar) does not belong to the UP government. The state government had sold it to Mumbai’s UY Aviation four years ago. The deal was done after the plane had met with an accident in Allahabad.” The flight that crashed today was 20-years-old.

According to officials, the aircraft was a civil utility aircraft with a capacity of seven, which would include two crew members and five passengers. It is powered by a Pratt & Whitney engine that boasts of a horsepower of 550 hp. The website of GlobalAir (a Mexican airline) claims C90 can reach a maximum altitude of 30,000 feet and a maximum speed of 223 kts. The plane is 35 feet 5 inches long and is 14 feet 3 inches tall.

Maharashtra chief minister Devendra Fadnavis, who visited the site of the crash in the evening said he had asked for a team of investigating officers to work on the case, “It is a worrying incident. What were the reasons behind the crash and who is responsible for it – needs to be found out,” he told the media.