The devastating damage to Puri, Bhubaneswar, Cuttack and Khurda has left millions homeless.

Bhubaneshwar after the storm. Credit: @03Archer 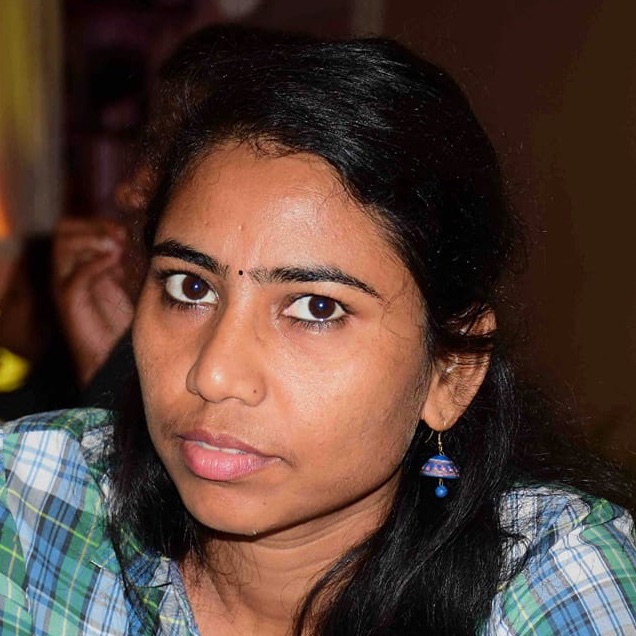 Bhubaneswar: While hosting the Hockey World Cup five months ago, Bhubaneswar was the envy of every visiting tourist that gushed over its tree-lined avenues, new bus stops and walkways, natural green cover, clean residential neighbourhoods wrapping themselves around ancient temples and its neat layout.

Today, the city is heartbroken.

Half of its trees have been uprooted, its lampposts twisted and shattered glass and torn aluminium sheets lie strewn everywhere. Come evening, many parts of the city sink into darkness with no electricity and water. There’s also no network.

Making landfall on the morning of May 3, Cyclone Fani tore through Puri town, home of Lord Jagannath, with speeds reaching more than 200 kmph. The damage can be gauged from the fact that the city’s railway
station will not be operational till May 10, according to the East Coast Railway. And what would be of greater anguish for many Odias are reports of damage to the 12th century Jagannath temple itself.

#Odisha: Visuals from Puri Railway Station after cyclone #Fani hit the region on May 3. pic.twitter.com/97WDfv3qPW

The untimely tropical cyclone hit Khorda district and capital city Bhubaneswar with far greater intensity than anticipated. It snapped electricity poles, brought down massive cranes and trees, carried the fiberglass dome at AIIMS off with it as well as the railways station’s roof, damaged the Biju Patnaik International Airport and even turned cars turtle inside a city showroom.

The devastating damage to Puri, Bhubaneswar, Cuttack and Khurda has left millions homeless. With the breakdown of telecom services (with the partial exception of BSNL and Jio), it has been just as stressful for people outside of Odisha to check in on their near and dear ones. 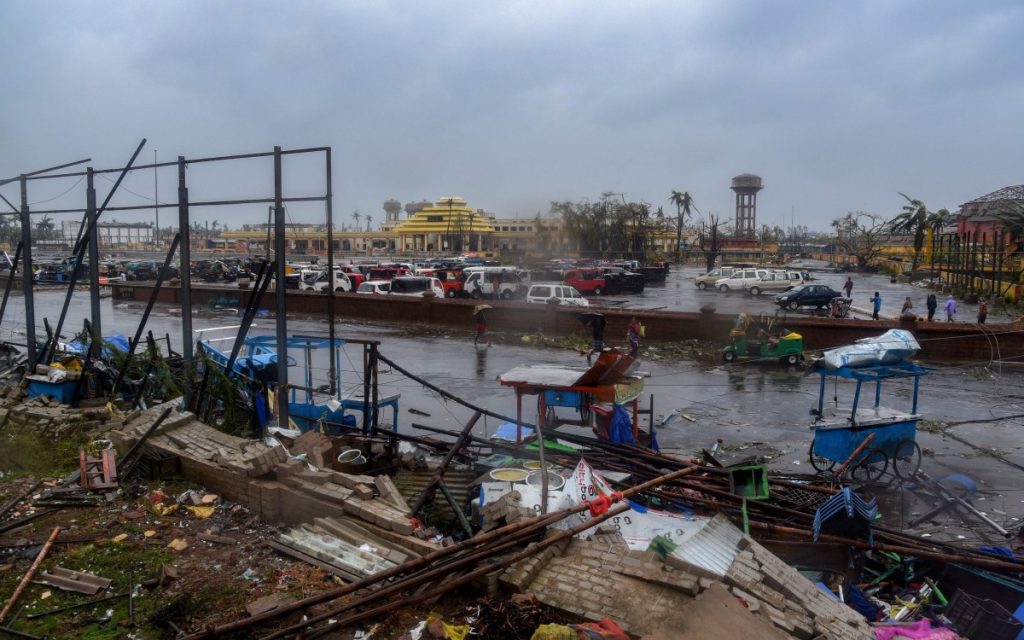 Mass evacuation helped decrease the human causalities. As per official reports, the death toll is at 34 so far.

Prime Minister Narendra Modi, who visited Odisha on May 6, announced Rs 1,000 crore relief after an arial survey of the affected area with chief minister Naveen Patnaik.

Power infrastructure worth Rs 1,200 crore has been damaged, leaving more than 30 lakh electricity consumers affected in the state, said state energy secretary Hemanta Sharma. He expects these figure to rise after the final assessment.

Efforts to restore power supply to normalcy will take more than one week, according to the government, which has committed to restoring 25% of the power outage in Bhubaneswar in the first phase. This may take longer in Puri, which bore the brunt of the cyclone.

Most households in the state capital depend on borewells, and without electricity there is no water to pump. “Generator suppliers are charging Rs 1,000 for per hour. Sustaining in Bhubaneswar has became really difficult,” said Sandip Mishra, a resident of Sahid Nagar.

All 48 fire services units – comprising of 350 fire fighters – are busy removing trees and restoring access to every part of the city. A problem that the city now faces is that much of its labour workforce, under the circumstances, has headed home. Bhubaneswar is short of manpower to help it get back on its feet – even hotels, restaurants have thin staff.

The frustration of being without power and water in summer season has forced many to leave the city. Neha Jha, a guest faculty at Ramadevi University, has moved with her family to Rourkela where her father works. “Water tank and pipes of Manorama apartment near have been broken. With no signs of it being fixed soon, we decided to shift to Rourkela.”

That isn’t an option of Vinay Kumar from Patna, who is studying engineering in the city’s Konark institute. The small apartment he rents has had no electricity or water for two days. His exams are scheduled for the seventh and he isn’t sure if they will be postponed. 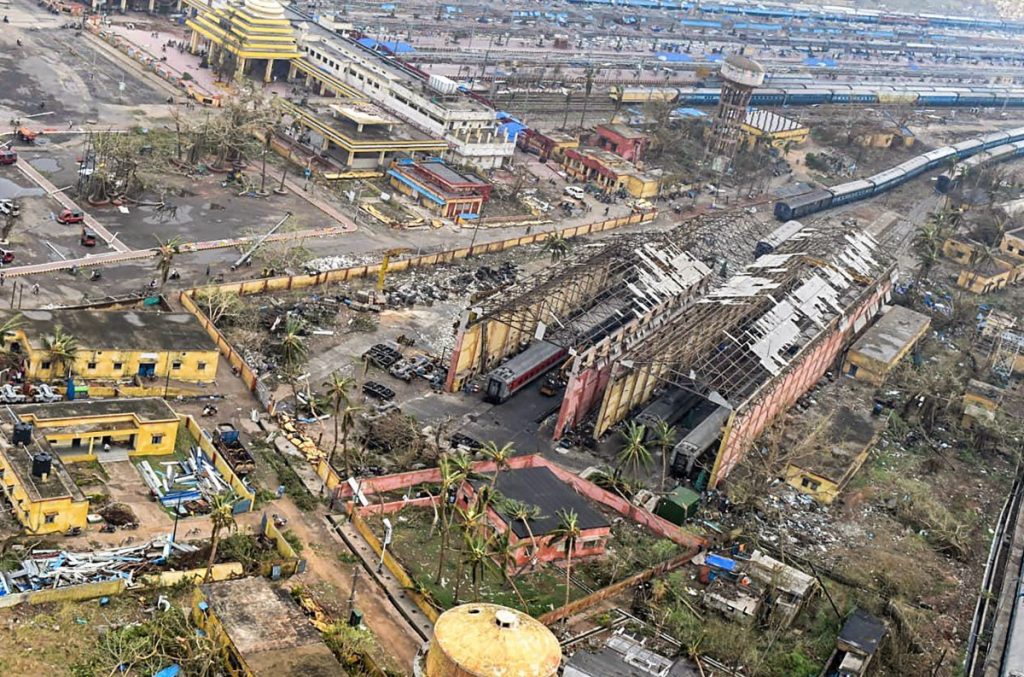 A bird’s eye view of the destruction caused by the cyclone, a day after it landfall, as part of the aerial surveillance conducted by the Coast Guard Dornier aircrafts in Puri, on May 4, 2019. Credit: PTI

Digital India is also failing miserably with ATM machines not dispensing money. Diwakar Meher, who was visiting the city from Uttar Pradesh hit every ATM outlet on Janpath Road. “We need money to buy food and water. Most shops are shut, only a few small vendors have opened their stalls and they won’t accept card payment. Any form of online transaction not possible without the internet,” said Meher.

Authorities at the popular Nandanakanan Zoological Park have been forced to shut the zoo indefinitely. There are no reports of loss to animal life, but there has been major damage to the green cover and infrastructure.

Viseswar Basti near Acharya Vihar has lost around 400 slum dwellings. Most of the asbestos and thatched roof houses of this slum have blown away. The homeless residents of the basti are waiting for relief.

Visikesan Sahoo, a 44-year-old auto driver from Dhenkanal who has been living here for the last 25 years says, “90% of the houses in the basti has been damaged. Water supply and electricity are the main things right now. We don’t ask for much, but plastic for our roof and water supply would really help us.”

Prasad Rao, a 55-year-old trolley driver, and his wife S, Padma Rao did better and even took in their neighbours during the cyclone. “Our tin roof managed somehow, but surviving without food and water is difficult.”

Anjali Nayak, 35, sent her children to a shelter home but stayed behind. Within a few hours, Fani had blown most of the houses in the basti leaving everyone devastated, she said. “We are from poor family, it took us years to build a house in Bhubaneswar, but now everything is gone. While we sleep in the open, which makes us feel unsafe and to protect us, our men stand guard.”

After it carried out initial surveys on May 4 and 5, the Bhubaneswar Municipal Corporation (BMC) began distributing relief materials on May 6. Around one lakh residents in 67 wards have been identified by revenue inspector, and anganwadi workers and their families will get 50 kg rice, Rs 2,000 cash, and Rs 500 to buy polytheme sheets. 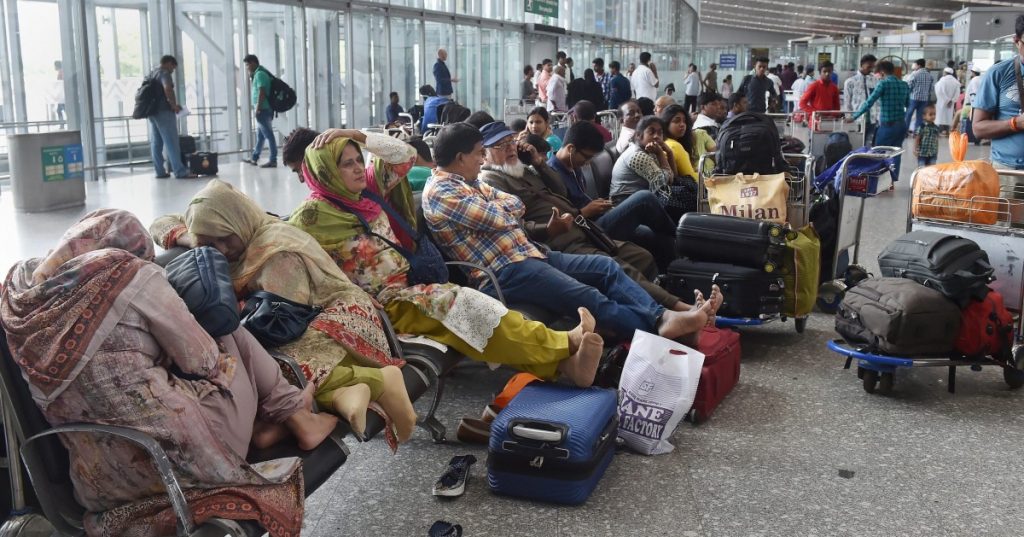 Flight passengers wait at NSCBI airport as airlines resume operations following a halt in view of cyclonic storm Fani in Kolkata on May 4, 2019. Credit: PTI

Trains, flights and bus services, which were suspended on May 3, have resumed. The East Coast railway has started special trains from Bhubaneswar from the evening of May 4.

Many tourists who were visiting Puri, Odisha’s main tourist attraction, are stuck in railway stations, hotels and bus terminals waiting to find a way to return home.

Natmal Upadhya and his family reached Puri on May 1 from Rajasthan for a darshan at Jagganath temple. He only found out about Fani after reaching the town, he says. The 16 of them are now stuck in Goudia Math in Puri. 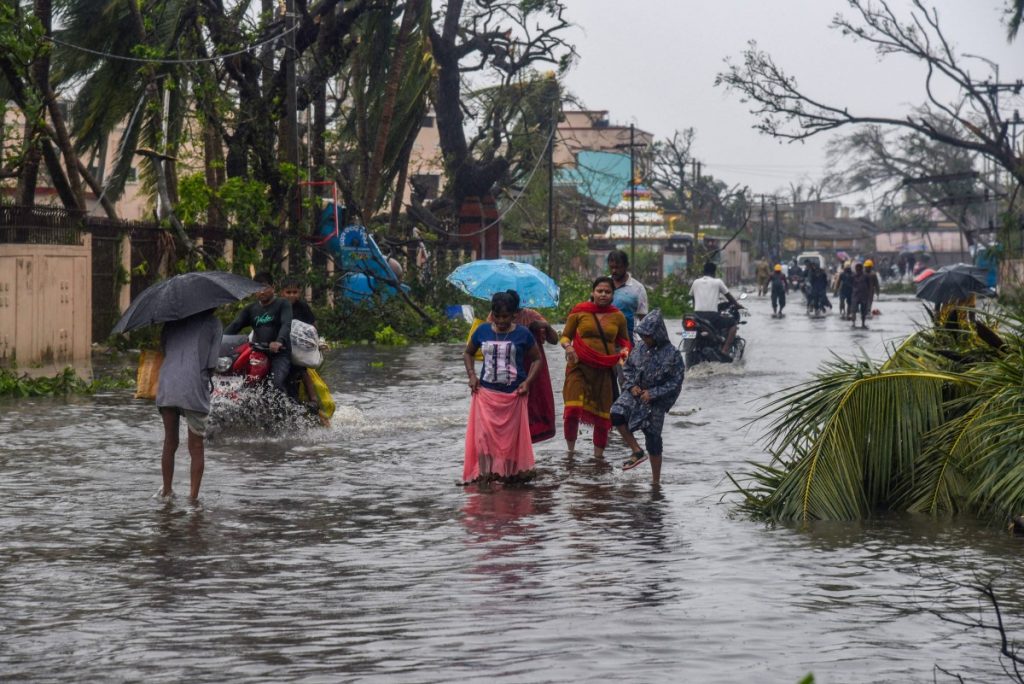 People wade through a flooded street after Cyclone Fani made its landfall, in Puri, Friday, May 3, 2019. Credit: PTI

“Had there been proper coverage about Fani in the national media and advance warning, we could have cancelled our trip,” said Upadhya. “In comparison to local tourists, there are more tourists from other parts of the country visiting Puri. So for their awareness, the arrival of Fani should have been covered properly in Hindi channels in advance and at a regular interval,” he added.

Since then, the family has moved to Bhubaneswar and been waiting at the railway station. “Puri is totally devastated, there is nothing left and it was difficult for us to survive there, without food and water. We have children and senior citizens with us. We will leave for Hyderabad,” he added.

Another tourist, Shrikumar Tiwari, 50, who arrived on May 2, says he took refuge from the cyclone at the station, whose has roof was blown away. “People were really scared on the day when Cyclone hit. But railway officials and police personnel helped everyone in the station. They provided food in the evening. It’s been three days we are still stuck in the station,” said Shrikumar.

Meanwhile, petrol pumps are running out of petrol and diesel and sales are being restricted to a few litres. Most Indian Oil pumps are running out of oil. However, Bharat and Reliance petrol have got a supply of tankers.  Fear of a shortage has resulted in long queues of vehicles at these pumps. However, oil tankers have started arriving at a few petrol pumps on May 5.

With public transportation disrupted, auto drivers have increased their fares. “With no option left, we are compelled to surrender to the high prices charged by auto drivers. When we objected, they said that they are purchasing oil in black,” said Manjuprava Biswal.