For Chennai's Construction Raj to Continue, it Must Shrink First

Let's blame the developed world for being the principal culprit for global warming. But let's not allow the developer world within India for the loss of water bodies, water ways and flood plains. 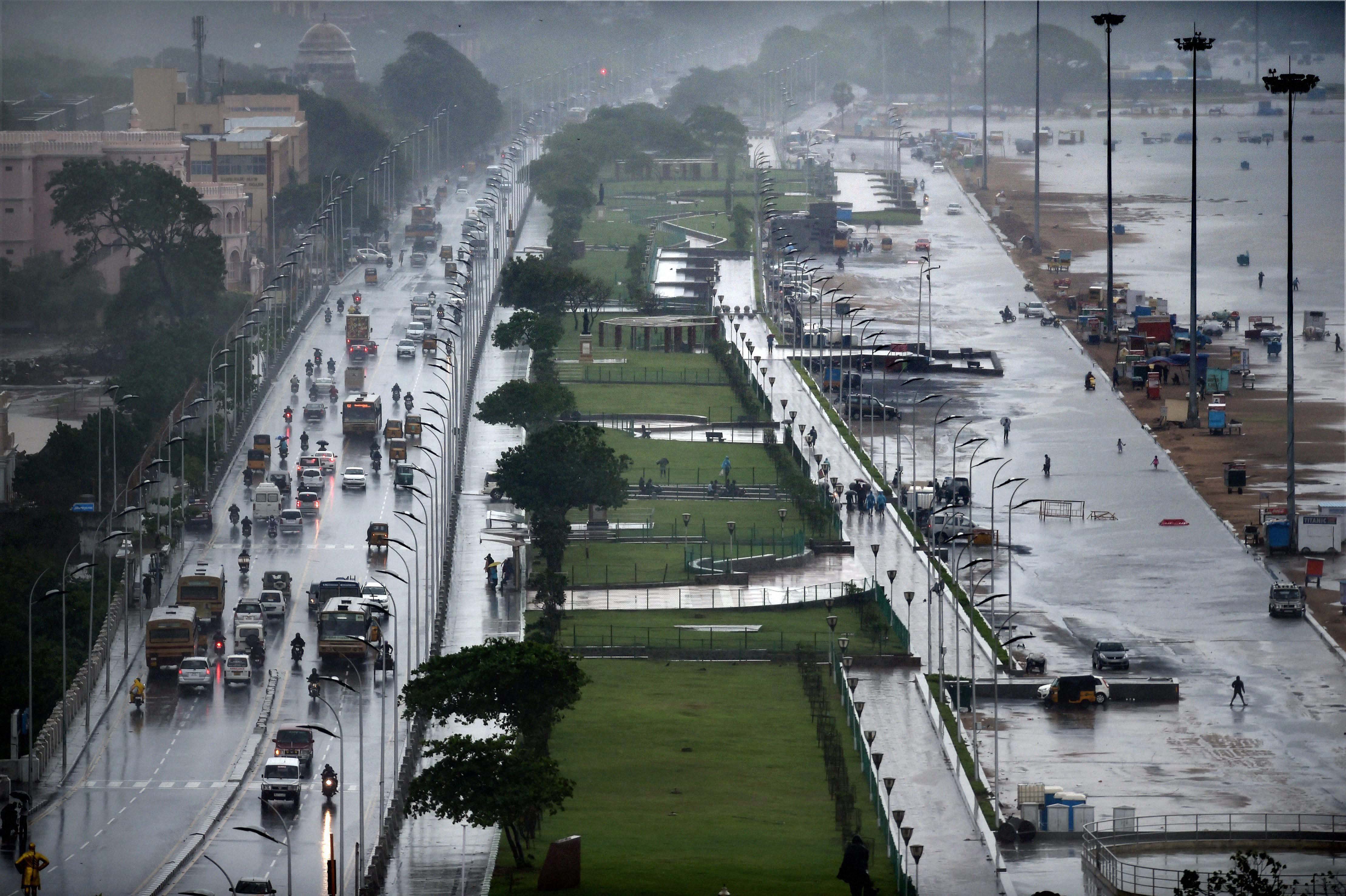 The Marina beach on the Bay of Bengal coast is partly covered with rainwater after heavy rains in Chennai on Tuesday. Normal life has been badly affected due to incessant rains. Credit: PTI

No use mopping the floor, it is said, without turning the tap off first.

The ‘tap’ of the north-east monsoon has been running non-stop over Chennai since mid-November. That of course is exactly when it is meant to be ‘on’. And should be welcomed. Only, this time it has turned stubborn and erratic, either coming down in a seemingly endless torrent or going off for a bit to return with a vengeance. It has felt and sounded vengeful.

There has been another strange way to it. It is accompanied by no thunder, lightning or wind. It pours down with no noise other than that of water on water on more water. And it is no one’s powers to turn it off. An hour’s moderate rain is, in the best of times, enough to turn Chennai’s streets into a series of filthy ponds. The moody torrent has multiplied that a thousand times.

Chennai has become a sponge that can take no more. And it is soaked not just with what has come from the skies but what has oozed up from the earth – every conceivable human waste, the disgorged remains of a use-and-throw society, in or out of plastic bags, squelching their half-used half-discarded contents, the offal of kitchens and lavatories, dog-turd, dead rats. Unsegregated home muck, empty plastic containers, cosmetic outers, baby-disposables, condoms, used footwear have always been known to spill out of street garbage bins in a flowing lava of plain yuck. Garbage collection happens with fair regularity, both by tiny women sweeping the stuff and giant bowsers lifting it up by toothed cranes.  Seen from its hindquarters each of those vehicles looks like a satiated monster dribbling the food it will not swallow and will not spit out.

But in reality each of those monsters is a benefactor, no less. It removes from our immediate vicinity to some far destination that which we have flung out of our lives. The crop being always many times more than the lifting, it has to leave something behind for ‘the next round’ and has to let its holding hang. The cycle has been around for so long now that the city’s standard residents have become inured to it and barring a few ‘crazy’ individuals and volunteer groups no one does anything about it.

This time round, with the collection impeded by rains, the accumulation has become formidable, making of rain water ponds breweries of a hooch of all hooches, a suppurating bog that is home to random dog and rooting hog.  And no one is even thinking let alone trying to do anything about it.

The flood in Chennai is about more than water water being everywhere. It is about Chennai choking on itself. The rain is the author of the deluge; Chennai is its copyright holder.

But the overpowering stench and these visual horrors mask a much more important malaise. The city’s garbage gets removed, slowly, perhaps, but it does get removed. It is a surface irritant. The other malaise stays. It solidifies, becomes our permanent landscape. This is what many – not all but many – of the city’s builders and developers, its great honchos of growth, are doing to the city. Construction and more construction, construction.

Natural water bodies, marshes, ponds and pools, the traditional eri and kulam,  have not been spared by them. They are filled up, built upon, turned into housing complexes, high-rises. The same has been the fate of  the Adyar’s flood plains.

Where is the rainwater’s runoff to find its way? There is no place left for it to run into. And so it swells the river, makes its own new pools on any surface depression, sometimes creating its own hollows. And when there is that much of it, the overflowing river breaches its banks and with all those self-created ponds and pools becomes a grid, becomes a flood.

Let us by all means blame the developed world for being the principal culprit for global warming and climate change. But let us not allow the developer world within India for the loss of water bodies, water ways, flood plains in cities like Chennai. That is our own internal ‘First World’.

On the street that I live in, three singularly handsome residential apartments have come up only this month. One of them, the handsomest, has a gymnasium and, if I am not mistaken, a swimming pool. It has been raised on the site of an old-style bungalow which was sold for ‘developing’. The process has led to the drainage in its front to get heavily compromised with the result that an ankle-deep cesspool appears with even a few minutes’ rain and takes days to clear, fostering mosquitos and filth. This has been an unintended side effect but what a side effect! Should the taxpayer have to pay for rectifying this?

Here I must salute the average Chennaivasi for the exemplary instances shown by her and him to help those who have faced the worst whiplash of the flood. Individuals and associations have offered food, shelter and material goods to those who have lost their homes and livelihoods. The flood has been a leveller of extraordinary scale. With the net disappearing, the cell phone, the laptop and the ATM suddenly became useless. Everyone was equally marooned into isolation on a medieval island. And the finest instincts came to the fore, annihilating caste, creed and class. I know this will last as long as the crisis lasts and thereafter things will revert to ‘the usual’ but the change has been great to behold for its duration.

The Government of Tamil Nadu is right in asking for unprecedented assistance from the Centre to meet this first-of-its kind calamity. But it must do some soul searching of its own about the urbanisation model it has allowed, encouraged, even hailed as a sign of modernisation. And as the funds pour in for the city’s ‘renewal’, it must  ask itself whether it is going to repeat ‘more of the same’ model or do something radically different, restoring flood plains, drainage and water bodies. It must map every flood pond to check its causes and remove it to prevent another flood.

But it must also do something more, something gutsy.

It must acknowledge that Chennai is a coastal city can grow only on three sides. Grow it has to, but before it grows more, it must also shrink. How? Chennai’s High Court should, after a respectful consultation with Their Lordships, shift to Madurai. It should have its commercial capital in Coimbatore. It should move its Legislative Assembly to Tiruchirappalli. Only its permanent secretariat should continue in Chennai, with the Governor and Chief Minister and Ministers headquartered there.

The Republic of South Africa has its government offices in its capital city, which is Pretoria. Its Parliament is located  in Cape Town, its Supreme Court in Bloemfontein while its commercial capital is Johannesburg. And it holds well together.

Only Chief Minister J. Jayalalithaa can bring this about. History will honour her courage and foresight if she does. If Chennai renews itself with ecological intelligence, engineering wisdom and visionary sagacity its 2015 flood would have served a purpose. If Chennai renews itself with its habituated patterns getting further entrenched, it will expose itself to a flood of chastisement from a future and not too distant generation.