The entire project has been marked by opacity and lack of public consultation, say activists.

An artist's rendition of the construction of the Mumbai coastal road. Art: Parag Kashinath Tandel

Mumbai: Dredgers, cranes, pile drivers, sand and other construction equipment are all working round the clock and speedily filling up the sea to create new land. A small knot of men watch, helplessly – they are Kolis, a millennia-old community that has fished in the waters around Mumbai’s coastline and generations later, still continues to do so.

There is dismay and pessimism. “Our livelihoods are gone, our way of life will soon be over,” says Sanjay Baikar, president of the Vanchit Machchimar Haji Ali Sahakari Sanghathan, which represents the members who fish in the Haji Ali bay, overlooking the famous 15th-century mausoleum of a Sufi pir.

The government’s pet project, coastal road, along the western side of Mumbai, is moving along rapidly, and the fisherfolk community, around one lakh strong and dispersed all over, is viewing it with great alarm. The construction is budgeted at approximately Rs 13,000 crore.

The Haji Ali group is one of the smallest communities among the Kolis. But they will be among the most affected by the 22-km-long coastal road that is coming up at rapid speed on the western coast of the city. The others live in villages along the west and east coasts and, because of larger numbers, have a bit more voice, but their objections have been waved away.

At Haji Ali, they say, the impact of the new land being created is visible months after the construction began. “The noise and vibrations of the reclamation has disturbed the fish and when we set out, we find nothing at the end of the day except some small fish. The big ones have moved away deep into the sea,” says Baikar. Incomes have fallen, he says. “I am in debt for a lot of money and so are other fishermen.”

He points to a boat with a huge hole on its side – he says it was knocked about because there was nothing to slow down the incoming high tide, which has become more forceful ever since reclamation started.

These fisherfolk filed a petition in the Bombay high court in November 2020, against the land reclamation.

“The Brihanmumbai Municipal Corporation had originally said that since the coastal road would be only on stilts in these parts, fishing activity would not be disturbed; now they are reclaiming a lot of land and the Lotus Jetty has become inoperable. How are the fisherfolk expected to work?” asks their lawyer Meenaz Kakalia. 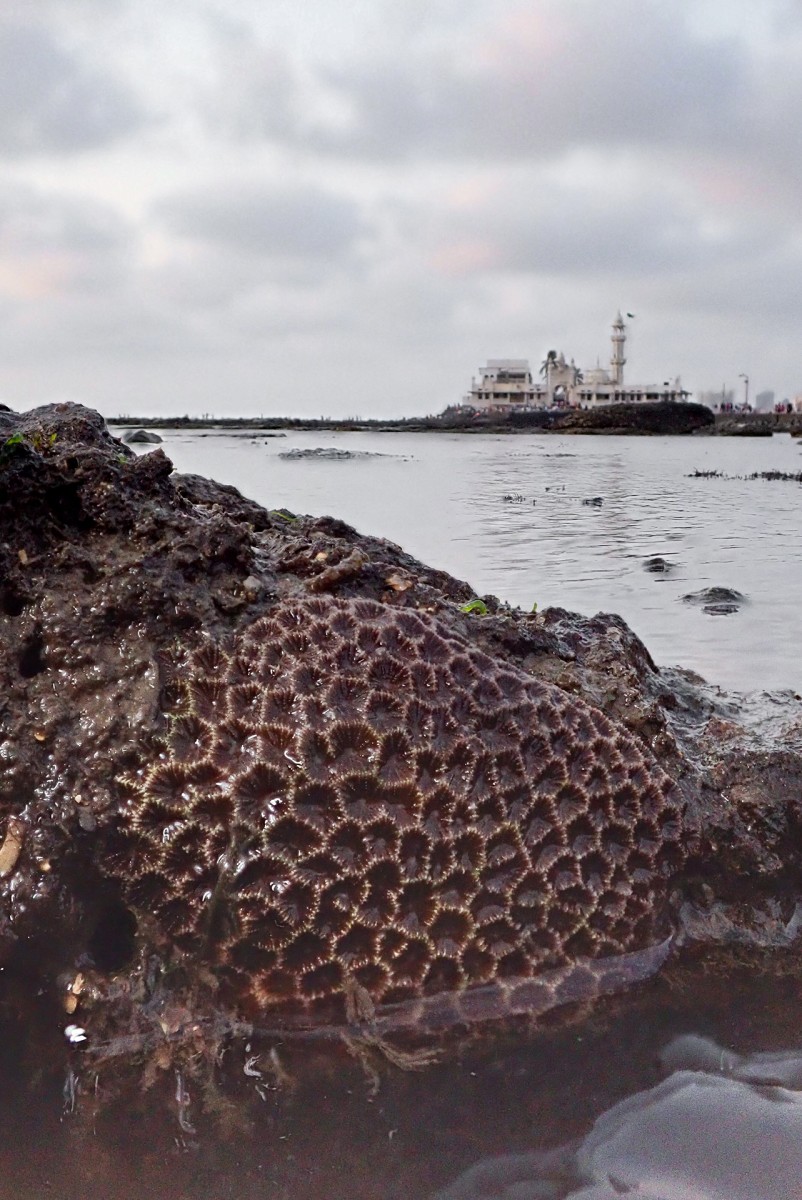 Corals found at Haji Ali bay in Mumbai, which have been destroyed. Photo: Marine Life of Mumbai

The big fish, till recently to be found close to the coast, have gone further into the sea, leaving just small fish within reach. Environmentalists say that the reclamation has destroyed old corals and is affecting the tides, something that will now change local marine life completely. “We have tried to tell the Corporation about this, and maybe things will get better somewhere else, but as far as Haji Ali is concerned, coral life is destroyed, perhaps forever,” says Shaunak Modi of Marine Life of Mumbai, a community of enthusiasts and experts which maps coastal life of the city.

The road will once and for all end Mumbai’s famous sea view and, when it is completed, replace it with a winding road for traffic, which will pass on land, on stilts through the sea and even a tunnel.

The project has left architects, urban planners and citizens – and most importantly, fishermen – aghast, but Mumbai’s civic authorities are pushing ahead with the coastal road.

At the end of it, Mumbai will get – as claimed by the Municipal Corporation – not just a road free of encroachments or traffic jams, but several hectares of new land for parks, open spaces, parking spots and, presumably, restaurants and leisure activities. The fear is that ultimately, luxury real estate will enter the picture

Also read: The Coastal Road is an Expensive Mistake Mumbai Should Avoid

The Corporation, in fact, is very proud of the project and the speed with which it is progressing. Municipal sources say in the final months of 2020 a lot of work has been done. Over 175 acres under the sea have been reclaimed so far and over 100 acres is being reclaimed.

A 400-metre-long tunnel-boring machine has begun burrowing underground to connect two sides. Almost 20% of the work has been done, officials have said, and the Corporation expresses confidence that the road will be up and running by July 23.

A video being shared by the corporation gives a good idea of what it will look like.

A senior official of the corporation was contacted but there was no response. As and when a response comes, it will be added to this article.

An interim order of the Supreme Court as far back as December 17, 2019 permitted the Municipal Corporation to continue construction of the road but not to carry out any other development. However, citizens groups are alleging that all through the lockdown period, the Corporation was reclaiming land at a hectic pace, quite obviously far in excess of what was required for a coastal road.

“At the outset, we have to ask, is this coastal road necessary at all” and why the land is being reclaimed, says Debi Goenka, a convenor of the Conservation Action Trust, one of the many citizens groups that has filed a PIL against the project. Five different petitions, representing citizens, environmentalists and fisherfolk, have been clubbed together and are being heard in the Supreme Court.

Another key question is, for whom is this road being built? “Justifying the construction of the underground Metro 3 line, the then chief minister Devendra Fadnavis had said that thousands of cars would come off the road as people would travel by the underground. Now they are building a long, winding road just for cars. The whole world is shifting towards public transport, but we are encouraging [the opposite]. Since the road is being built by the taxes citizens pay, they are subsidising car owners,” says Goenka.

Urban planners say such projects are unnecessary and unviable, and are being rejected worldwide. Citizens’ groups, including some influential names from the city, have criticised the plan. A scathing report compiled by the Independent People’s Tribunal on Mumbai’s Coast Road that solicited the views of researchers, civil engineers, environmentalists, scientists and former bureaucrats had condemned the plan unequivocally in 2016.

Construction underway for the coastal road. Photo: The Wire

Prominent citizens set up a study to look at the project and the conclusion was – it is unnecessary and the manner in which was being “relentlessly pushed ahead as if it is a fait accompli, is a classic example of bad governance,” according to the chairperson of the committee, D.M. Sukthankar, former commissioner of the Municipal Corporation of Greater Mumbai. There was no transparency and no public consultation. The opacity is what has disturbed citizens the most. “We don’t get to know anything, not even in the media. One morning the construction crew is outside our windows and they begin,” said one petitioner, who has seen land being created on the sea “in shockingly quick time”.

The road, which loops in the sea, runs along the North-South axis of the linear city. The first phase, from Marine Drive to the Worli Bandra Sealink, is being finished at a cost of Rs 12,721 crore. Eventually, it will go up to Kandivali in the north. The first phase is scheduled to open in 2023.

A 36-km Metro 3 line is also on the same axis; for the past four years, digging work on the Metro – one of seven similar projects in Mumbai – has disrupted roads, but most citizens see its value; the coastal road will be of limited use – Goenka says even the most optimistic estimates say it will be used by 100,000 cars daily, a fraction of the 18 million population of the Mumbai Metropolitan Region. There will be no toll collected on the road by the Corporation, “so where will the cost be recovered from?”

More significantly, Mumbai’s centre of gravity shifted many years ago. South Mumbai – including Churchgate, Nariman Point, Fort – are no longer the premier business districts they used to be – many new areas have developed, ranging from Powai to Parel to the Bandra Kurla Complex, which is now the headquarters of all major financial institutions. Even the far northern suburbs beyond Andheri are preferred by many companies and residents.

Rents in Nariman Point, once a prestigious office address, have steadily crashed for over a decade, while the residential population of south Mumbai, including the one-time tony areas like Marine Drive, Churchgate and Cuffe Parade, have fallen noticeably. Restaurants are opening up in central and North Mumbai – south Mumbai is dead after 7 pm.

That is not likely to change for a long time. So why this rush to build so many connections from south Mumbai?

The original plan, conceived in 2011 when Prithviraj Chavan was the chief minister, envisaged a road hugging the coast. It has now changed to the current, more elaborate road, which will involve tunnels, roads on stilts and filling up wetlands. There is talk of a massive, 300-acre park being built beyond Nariman Point, again by reclaiming from the sea, many other open spaces for the public, viewing galleries and parking spaces and, most skeptics fear, more premium real estate.

Goenka has a frank assessment. “Soon enough, there will obviously be plans to develop sea-fronted real estate. But who will want to develop in south Bombay, when there is no demand? This plan may have looked attractive at one time, no longer,” he says.

He feels the Municipal Corporation’s recent moves are telling. “The BMCs demands keep increasing – it wanted 90 hectares, of which 20 were to be used for the road and the rest for public use. Then they asked for 21 hectares more – but the public use quantum has come down from 70 to 56. What does this show?”

Having exhausted all venues to either stop or modify the road and its design, Mumbai’s citizens are haplessly watching the rapid alteration – destruction, in the words of a petitioner – of their beloved coast. An activist says, “Last October, the Supreme Court referred the issue of reclamation back to the Maharashtra Coastal Zone Management Authority. The petitioners, which included many fishing community organisations, wrote to the Authority, but did not get a reply. In this cat-and-mouse game, the MCGM has succeeded in playing for time and meanwhile continuing reclamation to the point where they have presented the Supreme Court and the city with a road they will have no choice but to live with it.”