Summer fruits and trees overwhelm the senses, with their aroma, their splash of colours and their ability to make the Delhi summers bearable for those who have to live and work here. 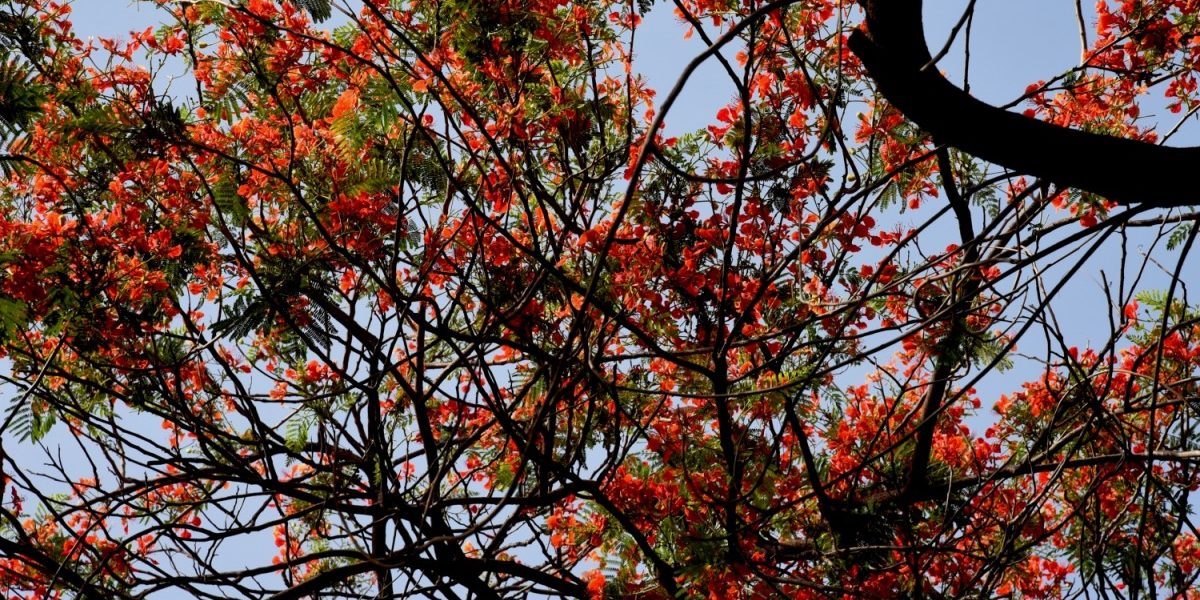 From the point of view of visitors to Delhi, it has two seasons – October to March: the time to get into and to stay in Delhi and April to September: the time to get out and stay away from Delhi.

One can’t really disagree with this binary because Delhi does go through a rather drastic and unwelcome transformation between March and April, returning to her inviting and hospitable avatar six months later when the monsoon withdraws at the end of September with the nip in the air gradually making the city more inviting with each passing day.

Those who can’t stand the Delhi summers and leave for cooler climes, miss out on some of the bounties that the blistering summers bring with them.

In fact, the rising temperatures hasten the flowering and fruition of trees and shrubs from mid-March itself.

The first to arrive is the Shahtoot or Mulberry. Though native to China, the tree has been around in India for so long that it is now as good as a native tree. The Mulberry has – over millennia – branched out into many species and sub-species. The ones commonly found in India are Morus Indica and Morus Australis. The fact that silkworms thrive on the leaves of Shahtoot might have had something to do with its spread all over. The Shahtoot is the favourite food of the Flying-Fox. It helps propagate the tree through its droppings. This largest of all bats is mainly vegetarian and is a native of India and other parts of the tropics.

When in fruit, the Shahtoot attracts many birds, as well juvenile and adult Sapiens – the only surviving species of the genus Homo who cannot resist low-hanging fruit. Shahoot is a strong antioxidant, regulates blood sugar levels among diabetics and has a long history of use in both the Ayurvedic and Unani Systems of medicine.

Also read: Why Does Delhi Hide Its Treasures?

The next to arrive is the Bel (Aegle marmelos) also known as the wood apple. Its thick, aromatic flesh is pulped, mixed with sugar syrup, diluted with water and turned into an aromatic drink that is a great coolant and energiser in the days of searing temperatures and energy-sapping dry winds that begin to define the Delhi summers from mid-April onwards. The flesh of the fruit is made into preserves or just scraped out of the hard shell and eaten.

The arrival of May signals the quickening of the pace of the northward journey of temperatures and, which quickly breaches the mid-40s celsius mark. This is the time that the Khirni (manilkara hexandra) begins to hit the markets in Shahjahanabad. 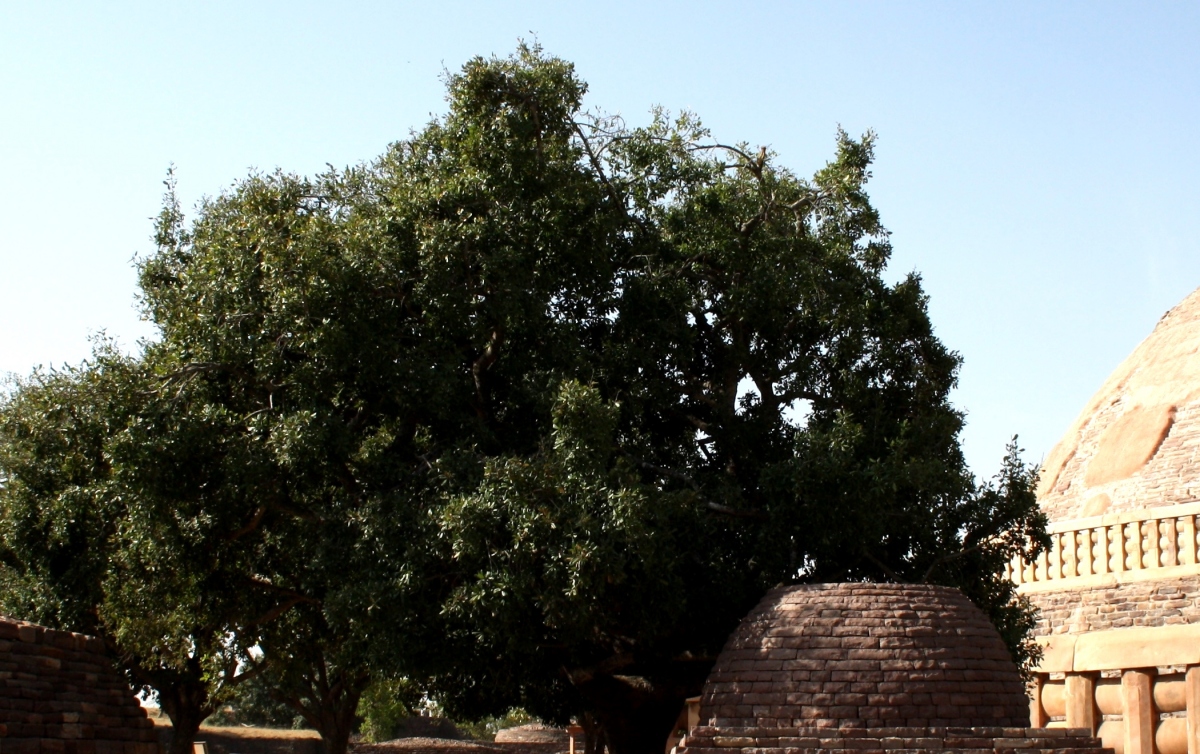 This deep yellow, ovoid fruit, barely a centimetre in length is packed with energy. So much energy in fact, that it is bursting out from the time the ripe fruit is plucked or falls from the tree and unless you eat it fast it begins to rot. It is perhaps because of this that the fruit is laid out in neat rows on a brick of ice. If you want to eat it, you can buy it at Rs 100 per kg and eat it chilled. It was known as the King of Fruits or Rajphal and kings consumed it as a great rejuvenator. The Khirni, too, is a favourite of the Flying-Fox.

If you want to eat it, you have to be in Delhi in May and June, though Sanchi, which is hotter at this time of the year, is also an option.  If in Delhi, you have to go looking for someone selling it in Chawri, Ballimaran, Lalkuan or Matia Mahal. Khirni trees can be found growing along Sunehri Bagh Road and Maulana Azad Road in New Delhi, I don’t remember seeing any fruit on these trees though, probably all eaten up by the monkeys that seem to rule the roost in this area

If you want to eat them fresh off the branch, go visit the shrine of Qutub-ud-Din Bakhtyar Kaaki in Mehrauli or the Shrine of Nasir-ud-Din Roshan Chiragh-e-Dehli in Chiragh Dehli Village. If the oral traditions are to be believed, some of these trees were planted, by the two Chishti Sufis, almost 700 years ago. Pradip Krishen, the well-known ‘Tree Man’ of Delhi says that the Khirni tree has a very long life and some of the Khirni trees in Delhi might be more than 500 years old. 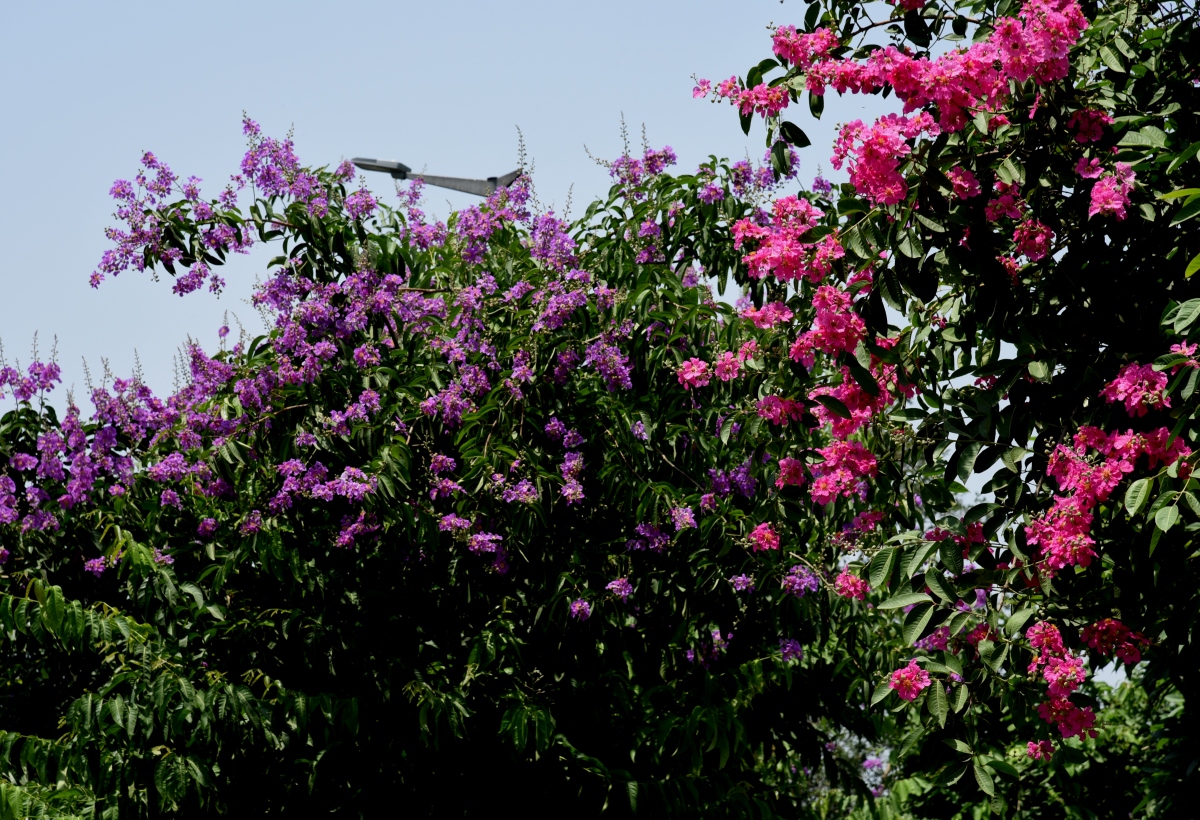 The other lesser known fruits of the summer months in Delhi is the Falsa (grewia asiatica) – eaten and also made into a delectable sweet and sour Sherbat. And when you have had your fill of these, then arrives the Mango (mangifera indica )and the Jamun (syzygium cumini), We are not going to talk about the Mango and the Jamun. Their lore needs far more space than we have in this column, but before moving away from the Mango, it might be of interest to mention that the other close relatives of this most celebrated fruit of the sub-continent are the Cashew-Nut and the Poison-Ivy. Just goes to show that family and parentage count for little, what you do is more important.

With this sobering thought, let us move away from fruits and talk about some of the brave trees that add colour to Delhi in these unbearably hot summer months. The three that really make Delhi worth living in the parching and energy-sapping heat of Delhi, are Amalts, Gulmohar and Jarul. It is possible that you might disagree and you might have your own list, but these are matters of Individual taste, some swear by Alfanso and there are those who will not look at a mango unless it is a Dussehri, Langda , Chausa or a Rataul. 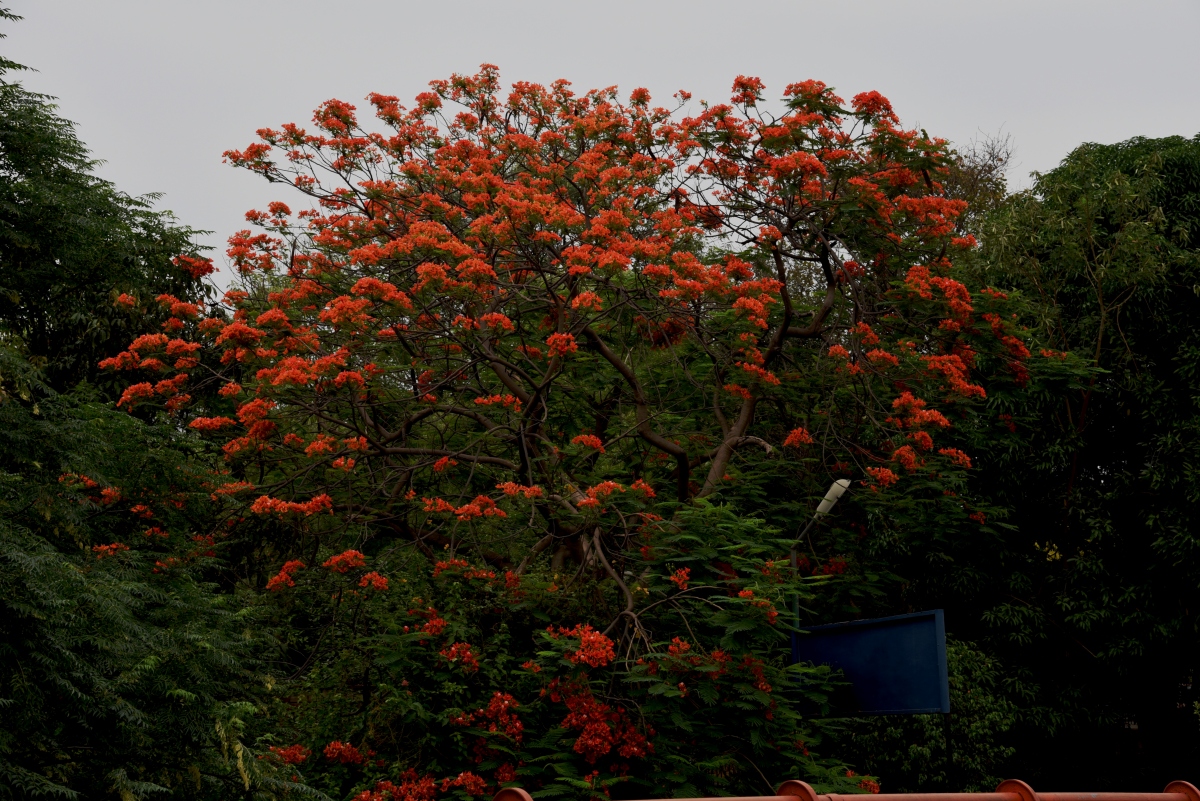 The last on the list of the flowering trees, Jarul (lagerstroemia speciosa) comes in three colours – a not-so exciting white, a beautiful mild mauve and a pink.  One had seen the trees, along Shanti Path, on traffic roundabouts, near Ashoka Hotel, near Sena Bhawan, on Gol-Methi Chowk and other places but did not know the name.

Help came from three sources: Pradip Krishen, Vijay Dhasmana and Jaishree Joshi. The first two need no introduction; Pradip is the living encyclopaedia of trees. Vijay Dhasmana is the man behind the Aravali Biodiversity Park. Jaishree, an old friend from JNU, is a nature enthusiast and organic farmer in Bangalore. All three were sent emails and all three got back real fast and now we know that Jarul (lagerstroemia speciosa) or ‘Pride of India’ comes from intermediate forests in northeast and southwest India – where moist forests grade into drier plains.

The joy of getting this information was doubled with the realisation that, despite all the skulduggery going on all around us, there are people – people with knowledge, who are always willing to share. 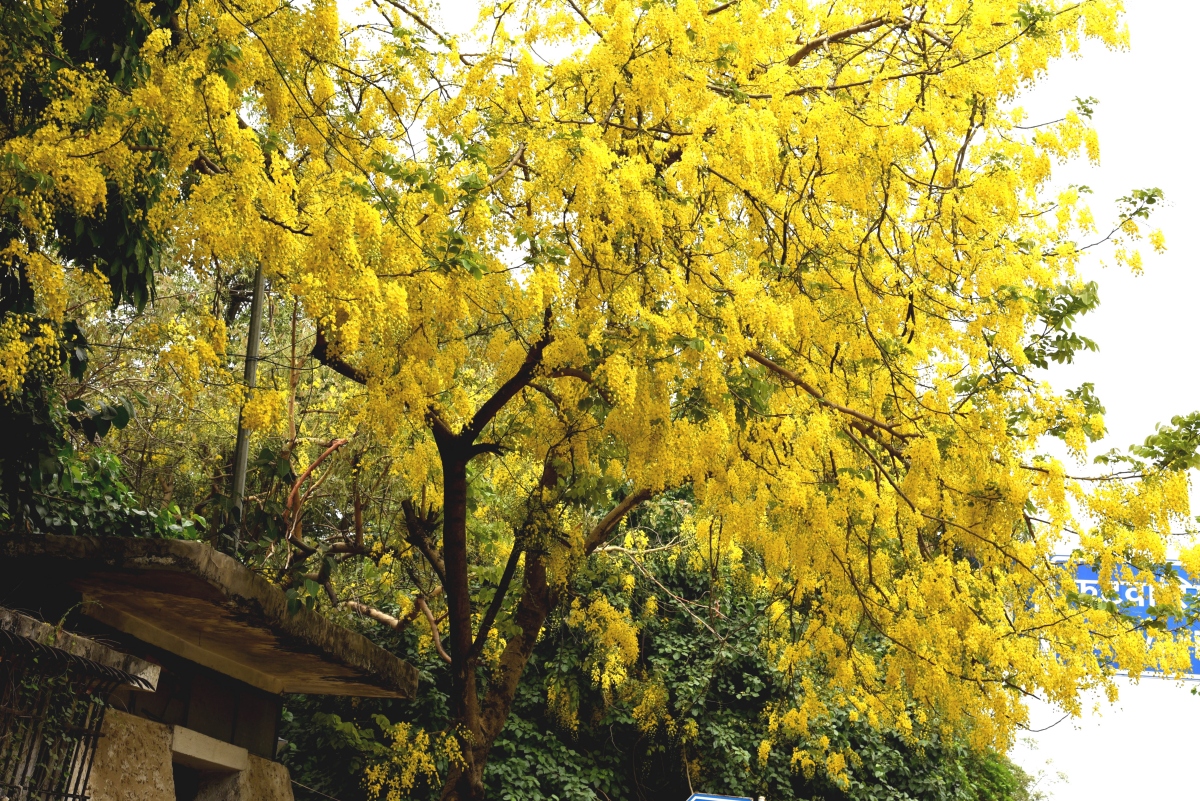 The other two trees, the Amaltas or Laburnum (cassia fistula) and Gulmohar Delonix regia are more common, not only in Delhi but almost all over India, except for the colder and very hot and dry regions.

Amaltas, a tree with several uses especially as a strong purgative, in both the Unani and Ayurvedic medicines, is a native of the sub-continent. Its cascades of stunning Yellow flowers that resemble a luscious bunch of grapes are breathtakingly beautiful. Walk on an avenue lined with the Golden Laburnum and you forget the blazing sun, the sweat and the hot surface winds.

The Gulmohar, with its deep orange, scarlet or rarely yellow flowers, is another stunning tree that is at its best in the burning hot summers of Delhi. A native of Madagascar, Gulmohar now growing all over the tropics and sub-tropics, is the source of many medical applications including anti-diabetic, anti-bacterial and anti-diarrheal.

The fruits and trees that overwhelm the senses, with their aroma, their splash of colours and their ability to make the Delhi summers bearable for those who have to live and work here, are nature’s acts of mixing the sublime with the mundane just as  in a role-reversal it jolts the migratory birds of the winter months with days and nights of endless fog to make them wish to be elsewhere.