Delhi – A City for Cars, Not Pedestrians

If a society has any claim to being a democracy, the pedestrian has to have the right of way. 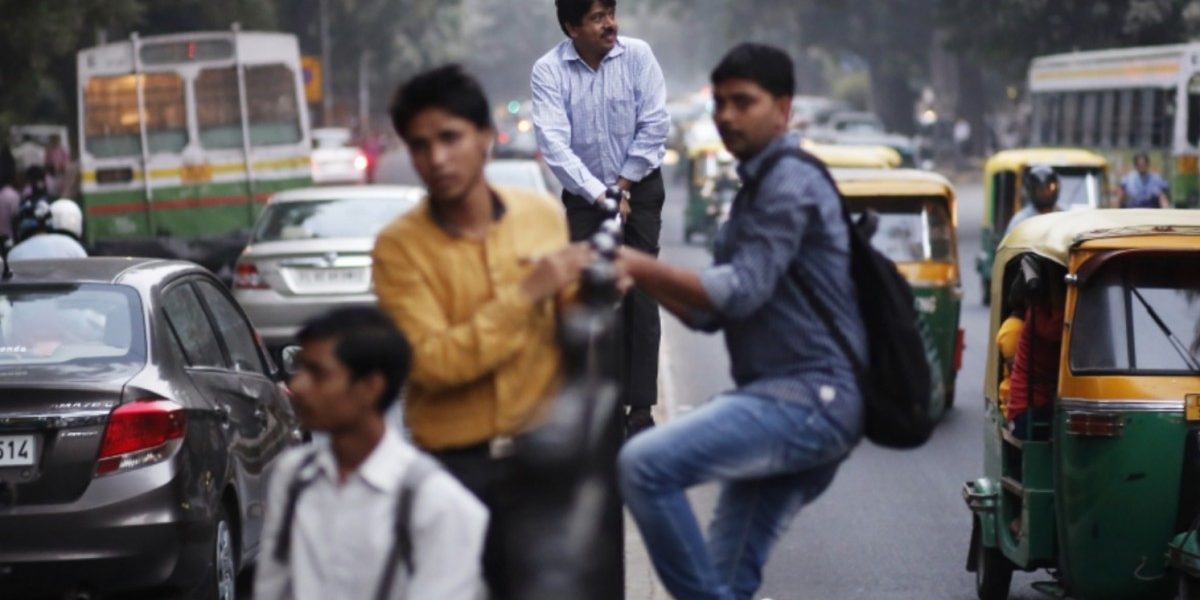 In an earlier piece, we had quoted official data to show that an overwhelming majority of those dying in road accidents are pedestrians. This issue comes up regularly whenever town-planners, the top brass of traffic police and those from the ministry dealing with urban growth and development meet to discuss and redress construction related problems.

Most of these deliberations almost invariably reach the same conclusion and suggest the same remedies that have been the outcome of similar exercises in the past. No one really seems to ask the one basic question that should have been asked when this exercise was started. The question is: if earlier attempts have not led to any substantial reduction in fatalities involving pedestrians, should we not take another look at the solutions we are providing?

Before proceeding any further, let us look at some of the conclusions and the standard remedies that have been proffered to explore if there are any fundamental flaws in the the approach to understand this problem.

One of the most widely held belief is that we as a people lack road discipline and that these deaths happen because people are jay-walking. It is said that people begin to cross the road without waiting for an ebb in traffic and that they never use zebra-crossings. The cumulative result is a large number of deaths and that those behind the wheel are often not responsible.

At times, sociological reasons advanced suggest that our cities have a large migrant population originating from rural areas. These people are either fresh arrivals or at best first generation residents. Freshly out of the slow paced rhythm of rural life, they are unable to adjust to the fast pace, the constant honking of horns and speeding vehicles in big cities. It has been argued that many victims in these road accidents are such fresh arrivals who get disoriented and end up jay-walking and end up getting hit by fast moving vehicles.

Now, if this is how we categorise a majority of those dying in road accidents, it is clear that the victim is to blame. This is not surprising in a society that specialises in accusing the victim – the ease with which we blame women for provoking men by the way they dress is one obvious example of how readily we apportion blame.

So, if the pedestrian is the cause of a majority of fatal accidents on our roads, this problem can be easily remedied: just remove the pedestrian from the roads. Push him up 30 or 40 steps atop an ungainly structure called ‘the foot over-bridge’.

The alternative is to push the poor chaps out of sight into dimly lit, rank and leaking subways. Subways that are guaranteed to be populated with unsavoury characters, ready to mug or molest.

If the pedestrian is lucky to not have these gents lurking in the corners, it will be due to the thick layer of slime covering the floor. The pedestrian must choose between possibly breaking one or more bones on the slime covered floor or suffering worse in trying to cross the road. Either the subway or the highway option for the pedestrian is a solution that only an essentially anti-democratic society could have come up with.

According to a June 2017 release by PTI, there were close to one crore motorised vehicles in Delhi. This at a time when the population of the city was estimated to be nudging 1.8 crore. Of these motorised vehicles about 31 lakh were cars, 66 lakh were two wheelers, 2.25 lakh goods carriers and 35,000 were buses.

Despite such a phenomenal number of motorised vehicles being concentrated in the city, what is rarely recognised is that there still remained close to 80 lakh people in the city who do not own a vehicle and would depend on public transport for travelling and would be walking to a bus stand or a metro station.

Even if one were to discount 20 lakh of these as people who either travel by bicycles or stay at home, we still have 60 lakh people who walk in this city. A majority of even those who own bicycles, walk to a bus stops for longer trips. 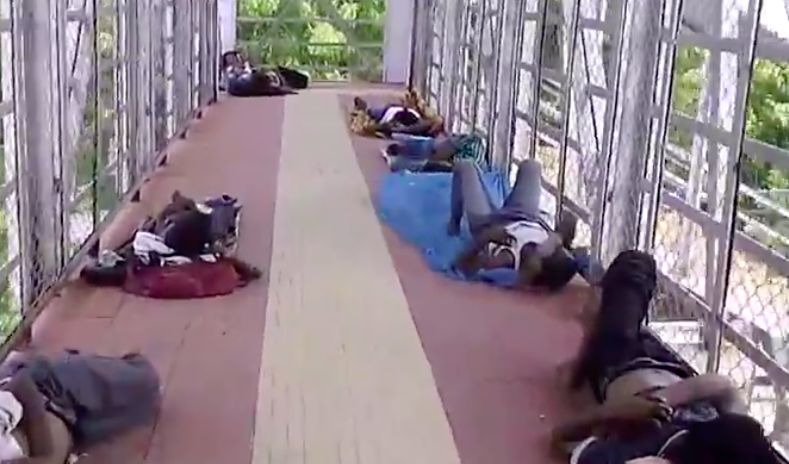 People sleeping on the foot over-bridges in Delhi. Credit: YouTube

We need to recognise that those who walk to work or to a point where they can access public transport constitute more than 60% of daily commuters. Let us also remember these are people going to work, children going to schools, young people travelling to colleges and universities, or home makers walking to the neighbourhood market or to pick-up their children from school.

Remember that the pedestrian is not an alien, she is not an unknown category. Most of us become pedestrians regularly, even the most privileged – the ones who end up sitting on the committees that frame all these grandiose schemes, have to cross a road once in a while and so, if not for other’s sake, for their own sake, they need to revisit this entire issue of packing off the pedestrians.

Over the past ten years, Delhi has broken into a rash of pedestrian foot over-bridges. Just look at the range: we have the standard staircase leading to a bridge, then there are those ugly monstrosities with ramps that eat up the foot path on both sides of the roads. The ramps were ostensibly designed to make them age and disabled friendly. They are mostly being used by two-wheelers and stray cows to cross the road. Most of them start six to eight inches above ground level and are impossible to negotiate by anyone in a wheel-chair.

The third type of the pedestrian overbridge is a mutant that made its appearance with the commonwealth games – equipped with escalators or lifts or both. Most of them do not work and are permanently under lock. The contractors who erected these strange contraptions must have made a lot of uncommon-wealth but no one has bothered to find out if they ever served any socially useful purpose. And now, there is this new variant near the ITO crossing. The lowly pedestrian overhead bridge has now been upgraded to the status of a skywalk, allegedly costing Rs 5 crore.

Running parallel to these abscesses that are constantly popping up on the fair face of Delhi, are those concealed and not so concealed hidden sores popularly known as subways. One thing separating them from the foot over-bridges is their cost. The subways are way too expensive and are rarely built outside the VIP districts of New Delhi. Both the subways and the foot over-bridges have one thing in common – the one thing that shows that they are siblings, born of the same lack-of-imagination that marks much of our urban planning – the near absence of users.

And this is the basic defect in the entire conceptualisation of the scheme. The pedestrian is the single largest category of users of the road, the idea that you can remove the pedestrian and solve the problem is an idea marked with an absolute absence of intelligence. 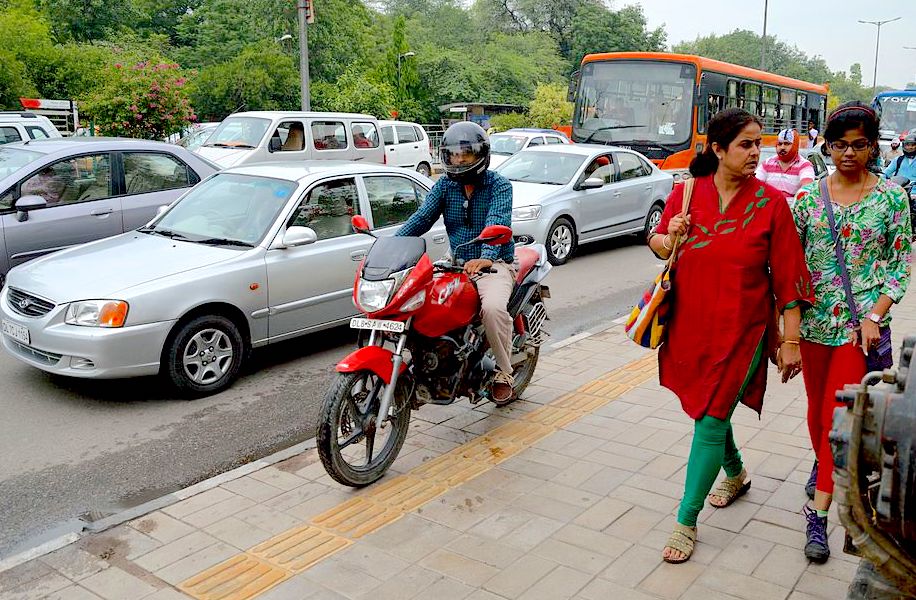 No matter how many smart city ideas we come up with and how many fact-finding teams we send on international junkets, no one, except perhaps China, can help us in understanding how to deal with a large population of pedestrians. There is, however, a thing or two that might come in handy if our policy makers keep their eyes open on their next trip abroad. The first is the shift to pedestrian and bicycle-only areas in the heart of big cities and the second is keeping the pedestrian at the centre of all traffic management.

Earlier, we had said that the idea of sending the pedestrian underground or overhead is essentially an anti-democratic idea. We said this because she is the single largest segment of road users. If a society has any claim to being a democracy, the pedestrian has to have the right of way. All motorised traffic has to submit to the needs of those who have to walk, or move in wheel chairs or on prosthetics. All traffic has to stop for the pedestrian. The zebra crossing and the foot path is the territory of the pedestrian and there must be zero tolerance for anybody encroaching on that territory.

Also Read: Is There a Method to Delhi’s Re-Developmental Madness?

Make this the centrepiece of all traffic management and you can save a lot of public resources currently being wasted in building foot over-bridges and fancy skywalks. Automobiles can go through underpasses or flyovers, the pedestrian, the handicapped, the elderly have to stay at the level of the road. Ensure this and fatal accidents will come down drastically. There is no other option.

The oft repeated ‘but why don’t they use the bridge?’ echoes the infamous ‘but why don’t they eat cake?’, popularly attributed to the unlamented Marie Antoinette. Those who manage the affairs of the largest democracy in the world would do well to draw appropriate lessons from her fate.