A large majority of land grabbing is done either with the active participation or encouragement of authorities who are supposed to protect it. A majority of encroachment is by power lobbies. Representative image. Photo: Reuters

A dispassionate and objective documentation of instances of encroachment on public land has never been conducted in this country. Why should one talk of an all-India documentation, when a similar documentation has not even been done in the capital city? There are many kinds of encroachments on public land, on water bodies like lakes and reservoirs, wells and stepwells, roads, pavements, parks, playgrounds, footpaths, market corridors, heritage structures and their environs and reserved forests. These are just a few examples and we are certain that the genius of those who make a rather comfortable living through encroachments can add several more categories to the list.

The different kinds of encroachments that one finds through the length and breadth of this land are fairly well represented in Delhi as well. It is not for nothing that Delhi is known as the microcosm of this phenomenally diverse land. And one thing that unites us is the universal practice of encroaching public property.

The remarkable range of stratagems through which land is grabbed in India and in Delhi can be clubbed together in two broad categories. First is the wilful encroachment by powerful, influential individuals or lobbies (including many who are supposed to protect the said properties). The other encroachments, representing a miniscule proportion of the total, are by the homeless, seeking to have a shelter above their heads.

Whenever environmentalists, heritage conservationists and civil rights activists raise questions about encroachments on forest lands, and land meant for public utilities, the administration makes sympathetic noises. It agrees that this has to stop, that encroachers need to be identified and made to vacate the public land that they have occupied.

The matter may even be referred to courts, through a writ petition. The petitioners are usually divided into two groups: those taking a purist position against all encroachments and those arguing for a distinction between wilful encroachers and those seeking shelter or protection against the elements. An amicus curiae is appointed to assist the court and the courts issue appropriate orders.

The very agencies that did not prevent the powerful when they chose to cock a snook at the law, are charged by the courts to identify the culprits and evict them. The orders for ejecting encroachers after studying objections and circumstances are invariably used against those incapable of hiring a battery of lawyers: the hapless, homeless daily wage labourers, the poor and the destitute. The poor get ejected, the big fish continue to fight the legal battle. In many cases, they succeed in retaining their hold for decades, if not in perpetuity.

There is no other method of understanding the unbridled land grabbing in Delhi. It is the DDA, and through it the municipal bodies, that control all the land in Delhi and most of the area designated as reserve forests. If one looks at the wanton destruction of the reserve forests on the Aravali, the unbridled encroachments by government agencies, the armed forces, the paramilitary organisations, private schools and religious gurus – some of them serving prison terms – it becomes increasingly clear that there is a system to this madness.

Some of the encroachers include those who should never wilfully ignore the law. Because their professed objective of existence demands that they never break the law. We speak of two kinds of establishments: those in charge of land and security and those who profess either to spread education or to make our passage to the hereafter less arduous. We will talk about some of these in this piece.

Also Read: The Peremptory Demolition of Slums is a Violation of the Law

The state agencies operating from the ridge, in violation of all orders of the courts, have no defence for their presence. And yet they continue. There are others who were given land on orders from above or had grabbed it while the caretakers looked the other way. And still others, like the Asaram Bapu ashram, that had encroached almost 39,000 sq. feet of ridge land, was served a notice on July 6, 2005 by the land and development office of the Ministry of Urban Development to vacate the land within 30 days.

What beats everything is the fact that no follow up action was ever initiated, no reminder, no show cause notice and no demolition squad. Had the encroachment on even one-tenth of this land been huts of the poor and homeless, the bulldozers would have razed them several times in these 14 years.

One of the duties of the armed forces is to provide security to their supreme commander, the president of India. An elite cavalry regiment, called the President’s Bodyguard (PBG), has been entrusted with this responsibility. To ensure their horses are well looked after and that they have proper space for exercise, they were allotted 60,000 sq metres of land on the central ridge. Why they were not allotted space inside the sprawling president’s estate or in the vast open spaces within the cantonment is anybody’s guess.  The land was being used instead as a polo club being run in the name of the President’s Estate Polo Club, without the knowledge and permission of the office of the president of India.

The president’s office got wind of it when the issue of encroachments on the ridge came up before the Supreme Court. The president issued orders to his bodyguards to disassociate from the polo club. Surprisingly, no orders were issued to clear out of the reserve forest. What is really bizarre is the fact that the PBG continued to manage the polo club, headed by the chief of the armed forces, for more than a decade. And this blatant encroachment would have continued had the matter not come up before the courts. 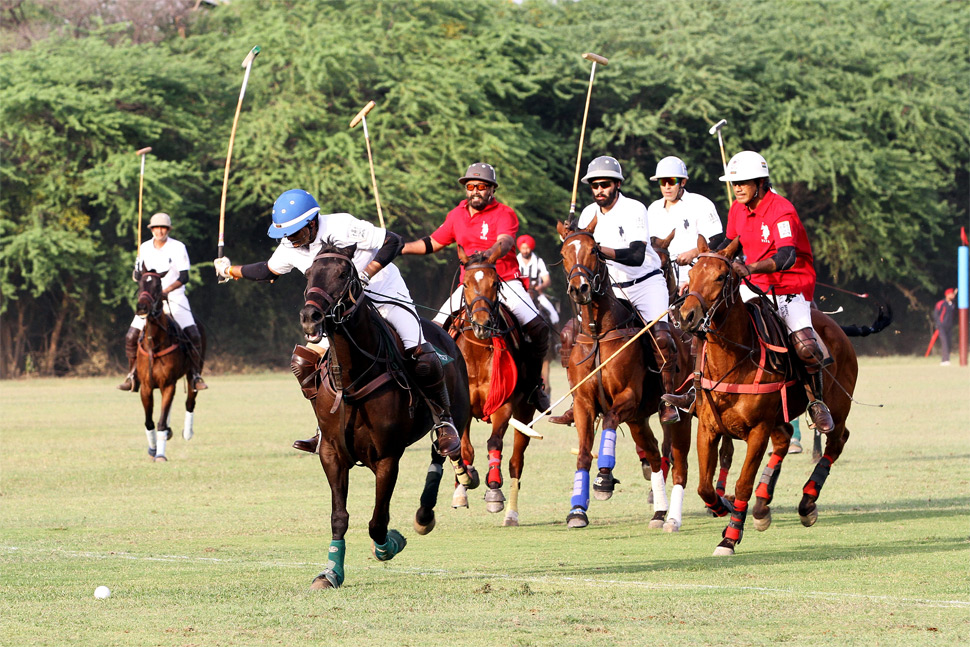 A polo club was being run in the ridge area. Photo: rashtrapathibhavan

The courts had declared the ridge as a part of our natural heritage, and still the DDA allotted land for building hotels and malls on the South Delhi ridge, between Vasant Kunj and the airport. Environmentalists approached the court, pleading for the protection of the largest aquifer of Delhi.

The environmentalists argued that the malls and hotels will extract huge quantities of water from the already depleting reservoir of subsoil water during construction, and will continue to exploit this water once these massive structures come up.

Also Read: Delhi Is Running out of Water, and It Is Everybody’s Problem

The courts asked for environment clearance certificates, which were provided with a small sleight of hand. Instead of getting two certificates, one for the four-five malls that were built together on parts of the south Delhi ridge and the other for almost a dozen hotels that were going to come up on the Aero-City complex, separate clearance projects for each structure were sought and provided. Nowhere was it shown that all these structures will come together as two complexes, and so the cumulative environmental impact was not recorded. Thus, this wilful encroachment of the Aravalis was put into place with the DDA and the builder’s lobby working hand-in-hand.

If encroachments have to be stopped, if diversion of public land into uses that the master plan of Delhi prohibits, then a beginning has to be made with these big encroachers. The rulers, the law makers and the administrators have to show that their hands are clean.

We will talk about other encroachers in the near future.