A Work Perpetually in Progress: The Curious Case of Signboards in Delhi

On several signboards, the names of even prominent national and international leaders have been misspelt. 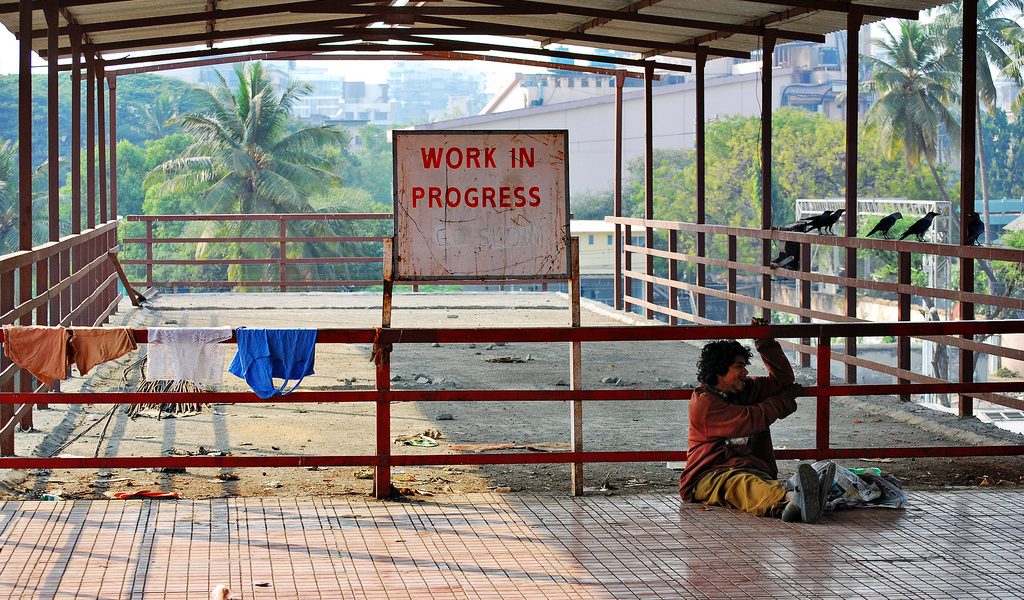 “Work in progress, inconvenience is regretted”, or its verbatim translation “कार्य प्रगति पर है – असुविधा के लिए खेद है” are phrases that all of us are familiar with.

The word ‘progress’ can denote development. It also gives the idea that the ongoing process, is of a non-permanent nature and the inconvenience is temporary. The Hindi translation does not communicate this idea. It seems to suggest, I am sure inadvertently, that inconvenience caused by progress is regretted.

We bring up this matter because signage in Delhi has become so appalling that there is a need to scrap the entire apparatus and start anew.

Like all problems in the National Capital Region, the issue is the multiplicity of authority. Multiple agencies erect signs. The most irritating are the ones that inform you are entering the territory of one such agency or stepping out of the jurisdiction of another. “NDMC area ends here”, “Welcome to NDMC area”. 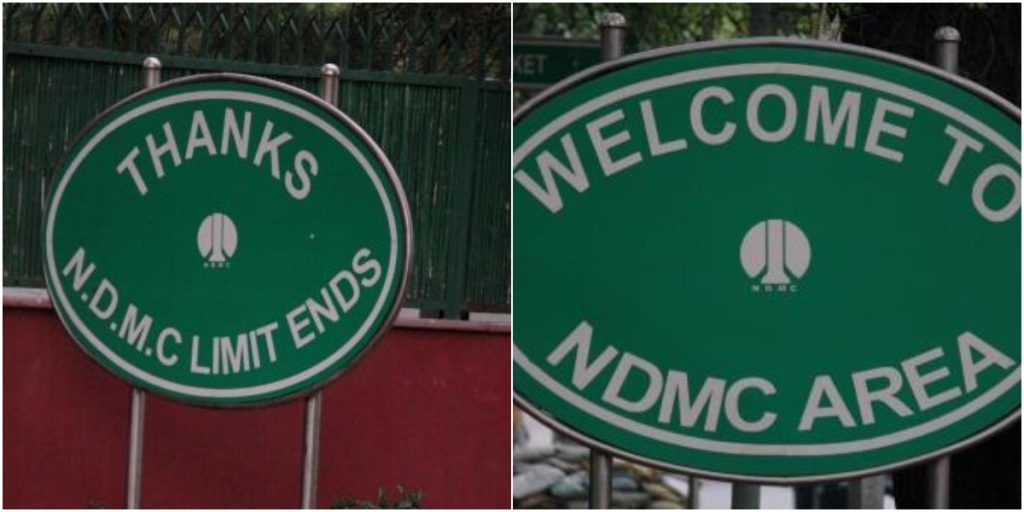 Such signs are to be expected at national borders. Credit: Sohail Hashmi

Similar signs are to be found when you enter the areas under the jurisdiction of MCD. These are the kind of signs one expects on national borders. Had these civic bodies succeeded in keeping the city clean, provided education, shelter and medicare to the poor, they would have reason to gloat. They have achieved none of these, yet advertise their presence.

Signboards in Delhi are written in four languages: Hindi, Punjabi, Urdu and English. This gives an opportunity to the empowered authorities to exhibit their illiteracy in four languages. On some signboards, we are illiterate in all four languages. In others, we pass the grade in a couple but slip in the others.

Photo Essay: A Look at Signage in Contemporary Paharganj and Gole Market

Through our protracted struggle for independence from the British, we learnt that freedom is indivisible and our freedom is not safe as long as other parts of the world are colonised. One of the major objectives of the non-aligned movement was to support the struggles for freedom in Asia, Africa and Latin America. We celebrated their leaders as inspirational figures and honoured their memory by naming major roads after these great fighters for freedom from imperialist yoke. Roads were also named after the founders of the non-aligned movement.

We have roads named after Joseph Broz Tito, Abdal Jamal Nasser, Ho Chi Minh, Bishop Makarios and others. Next time you are on any of these roads, look at the signage carefully and you will find that these names have been misspelt. 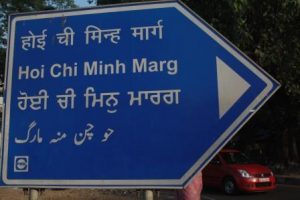 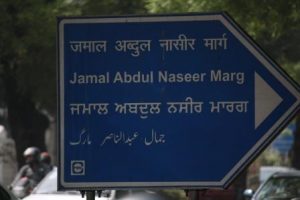 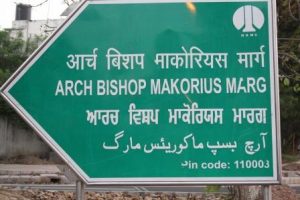 If you do not know how to spell Nasser, ask the Egyptian embassy. The name is pronounced as Jamal Abdul Nasir. In the Roman script, it is written as Gamal Abdel Nasser. Our PWD found a mid-way: Jamal Abdul Naseer, but in Hindi it became Naaseer. Ho Chi Minh is transformed into Hoi Chi Minh in English and Ho Chun Munh in Urdu.

Archbishop Makarios has been misspelt in all four languages. The road named after the former president of Cyprus is the old Golf Link Road that passes through an area inhabited by many diplomats. The signboard is a fine example of our international solidarity and our attention to detail.

These mistakes aren’t only for foreign sounding names, because Jamal, Abdul and Nasir are names that should not sound strange to most Indians. But what does one do when the name of K.K. Birla is written down as K.K. Bazla in Urdu and Shri Vinayak Mandir becomes Shri Vinayak Mannad, Najaf Khan is written correctly in English but becomes Najaph in Hindi and Nazaf Khan in Urdu. Moti Lal Nehru becomes Mati Lal Nehru in Hindi, Justice Sunanda is transformed into Jas Nas Sunanda Bhandare. 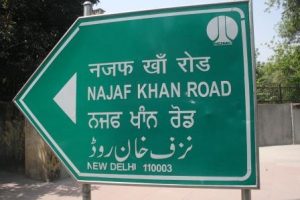 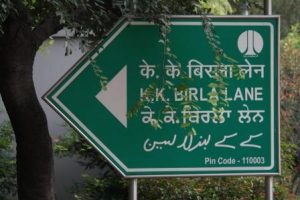 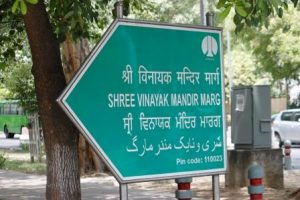 Mistakes are being made regularly in all the four languages, but the mistakes being made in Urdu are far more glaring. A possible explanation is that perhaps, nobody in the departments of the CPWD, PWD, MCD and NDMC can read Urdu. Unless this whole noise of making Urdu the second official language of Delhi is just a facade, why can’t they hire one person who can correct these silly mistakes? Jamia, JNU, Delhi University and many colleges have full-fledged departments of Urdu and Punjabi. They would gladly help. The question is does anyone care?

A couple of examples will show that no one does.

There is a sign fixed on a road that runs between the JNU old campus and Ber Sarai. It proclaims the name of the road as “Vedant Desika Mandir Marg”. There is no temple – and has never been – with that name on that road. A kilometer down the road, it becomes Aruna Asif Ali Marg. Aruna Asif Ali is misspelt as Aruna Asaf Ali. The road joins another major one that connects Mahipalpur with Andheria Mod. At this junction, the signboard is vertically divided in two by a brushstroke. The part pointing towards Andheria Mor is called Abdul Gaffar Khan Marg, while the part pointing towards Mahipalpur is called Vasant Kunj Marg. 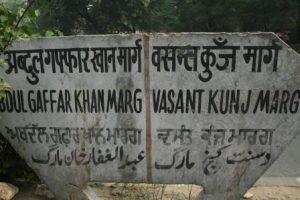 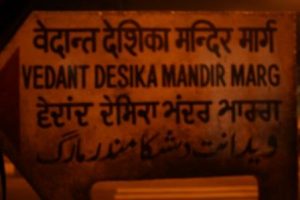 The final image is Mahatma Gandhi Marg in Hindi, English and Punjabi, while in Urdu it is Mehrauli -Badar Pur Road. 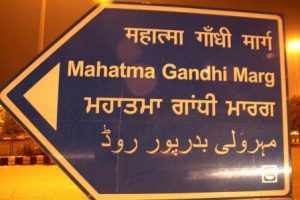 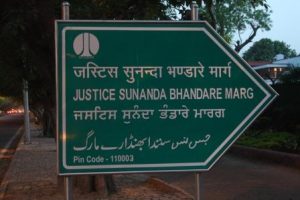 If this column is read by those who control the reins of power in this city, and we don’t know if there is someone who does, we can tell you that except for passing the buck, nothing else will happen. Because no one really cares.

Sohail Hashmi is is a filmmaker, writer and heritage buff. He organises regular heritage walks in Delhi.