Bengaluru Rains: Woman Electrocuted; No Respite for IT Capital as Rains Batter City for 2nd Night

Several across Bengaluru were seen using boats and tractors to cross streets submerged in water. Parts of the city like Yemalur, Rainbow Drive layout, Sunny Brooks Layout and Marathahalli are reported to have been worst affected. 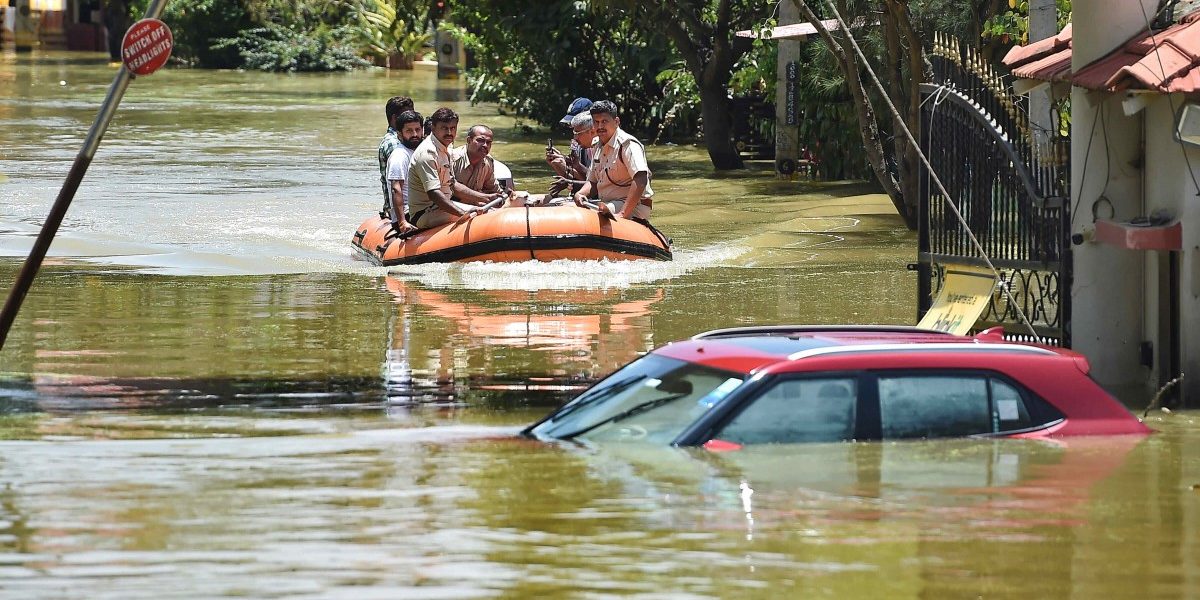 New Delhi: A woman died due to electrocution while travelling through an inundated roads in Bengaluru as the city grappled with overnight rains and water-logging for the second consecutive day on Tuesday, September 6.

The India Meteorological Department has sounded an ‘yellow’ alert in parts of Karnataka, including Bengaluru, till September 7.

The news agency ANI has reported the Kempegowda International Airport as having said that flights will be “slightly delayed today” due to the heavy rain and weather conditions.

A 23-year-old woman allegedly died due to electrocution on Monday night after she came into contact with an electric pole while navigating a road flooded with rain water at Siddapura in Bengaluru.

The victim was returning home on her scooter when her vehicle broke down and she lost balance. As she was trying to regain balance, she was reported to have touched an electric pole nearby for support, which is when she was electrocuted.

Locals rushed the woman to a hospital, where she died.

Several across Bengaluru were seen using boats and tractors to cross streets submerged in water. Parts of the city like Yemalur, Rainbow Drive layout, Sunny Brooks Layout and Marathahalli are reported to have been worst affected.

“Water has not receded, as there was rain once again last night (Monday), in fact I feel it has increased. I have to go to the office, kids have schools, and I somehow used a tractor today. Request the government and authorities to do something and restore normalcy,” said an office goer.

Several private schools have declared holidays and have switched to online teaching for a few days, while many offices have suggested that employees work from home.

Parts of the Outer Ring Road and Sarjapur road, which house some IT firms, saw major traffic snarls as vehicles broke down.

Software Engineers in Bengaluru are taking 2-3 hours to reach office to develop a mobile app where groceries can be delivered in 10-15 minutes. 😂#bengalururains#BengaluruRain pic.twitter.com/lbksAAYhRE

The news agency IANS has reported that the Outer Ring Road Companies Association has sent a memorandum to Chief Minister Basavaraj Bommai complaining about crumbling infrastructure in the stretch.

CM Bommai told reporters that some areas in the state capital have received 150% more rains than normal between September 1 and 5. Mahadevapura, Bommanahalli and K.R. Puram have recorded 307% excess rain, he said.

“This was the highest rainfall in the last 42 years. All the 164 tanks in Bengaluru are filled to the brim,” he said.

Bommai, who chaired a meeting of senior ministers and officials on Monday night said his government has taken the decision to release Rs 300 crore to deal with the current rain situation in Bengaluru.

On the T.K. Halli pump house in Malavalli taluk of Mandya which pumps Cauvery water to Bengaluru, being affected due to overflowing Bheemeshwara River and water from the surrounding lakes, the CM said flood water is being drained out, but it will take two days to drain out water from Cauvery 3rd stage pump house and to resume work.

Noting that an alternative plan has been formulated for water supply to Bengaluru, he said around 8,000 bore wells are under the Bangalore Water Supply and Sewerage Board (BWSSB) control and they would be restarted to supply water during the disruption in Cauvery water supply to areas.

Instructions have also been given to supply water from the Bruhat Bengaluru Mahanagara Palike (BBMP) bore wells to areas where there has been disruption in water supply due to rain, Bommai further said, adding that Water in tankers will be supplied on behalf of the government to the areas where there are no bore wells.

To all those who are mocking the water-logged Bengaluru:

With rapid urbanisation & sub-urbanisation, infrastructure is bound to crumble as we haven’t infused enough capital into upgrading the same