As rains let up on Wednesday, locals ventured out of their homes and authorities stepped up efforts to pump out excess water. However, more rainfall is expected towards the evening. New Delhi: Parts of Bengaluru that were battered by torrential rains for the last two days appeared to be slowly returning to normalcy with floodwaters by and large receding in some areas on Wednesday, September 7.

According to official sources, waterlogging in many roads appears to be clearing up while work is still on to clear inundated areas, worst hit by the rains. Further, road traffic appears to be returning to near-normal levels.

However, predictions of continued rains until September 10 from the Indian Meteorological department have worried locals after having received some respite from the downpour.

So far, the floods have caused widespread disruptions in water and electricity supplies, restricted the movement of a most of the city’s residents, and have even claimed one life.

On Wednesday, the Karnataka high court directed the  Bruhat Bengaluru Mahanagara Palike (BBMP) to set up grievance redressal cells in each ward of the city.

The court also directed the BBMP to notify the establishment of a team of engineers for each ward who would hear the grievances of the residents and manage the “systematic water flow”. Further, it directed the civic body to expedite the proposal in order to get the government’s approval at the earliest.

Regarding the water logging, the BBMP told the court that pumps are being deployed to drain out excess water in parts of the city and that sluice gates will be installed in all of the city’s lakes to avoid flooding in the future.

Waterlogging had also disrupted supplies of electricity and water to residents of the city, prompting the government to deploy water tanks and meet the shortfall with water from borewells.

However, on Wednesday, the city’s Cauvery water supply resumed to a large extent after flooding at a pump in T.K. Halli had been affected by the floods, according to news agency PTI.

Meeting with IT firms

According to NDTV, state minister C.N. Ashwathnarayan is set to meet with representatives from a number of IT firms in the city to address their grievances caused by the floods.

The torrential rains over the last few days had prompted IT firms and startups in the city to direct their employees to work from home. While shifting to the hybrid mode some of these firms to keep operations going, others focused on research, requiring personnel to be present in the office, saw their business disrupted.

Earlier, visuals had emerged of employees of IT firms being ferried to work on tractors. Ashwathnarayan will be joined by chief secretary Vandita Sharma, chief commissioner of the BBMP, Tushar Giri Nath, officials of the city’s water authority and Urban Development department and the police commissioner C.H. Pratap Reddy in the meeting with representatives from Wipro, Nasscom, Intel, TCS and more. 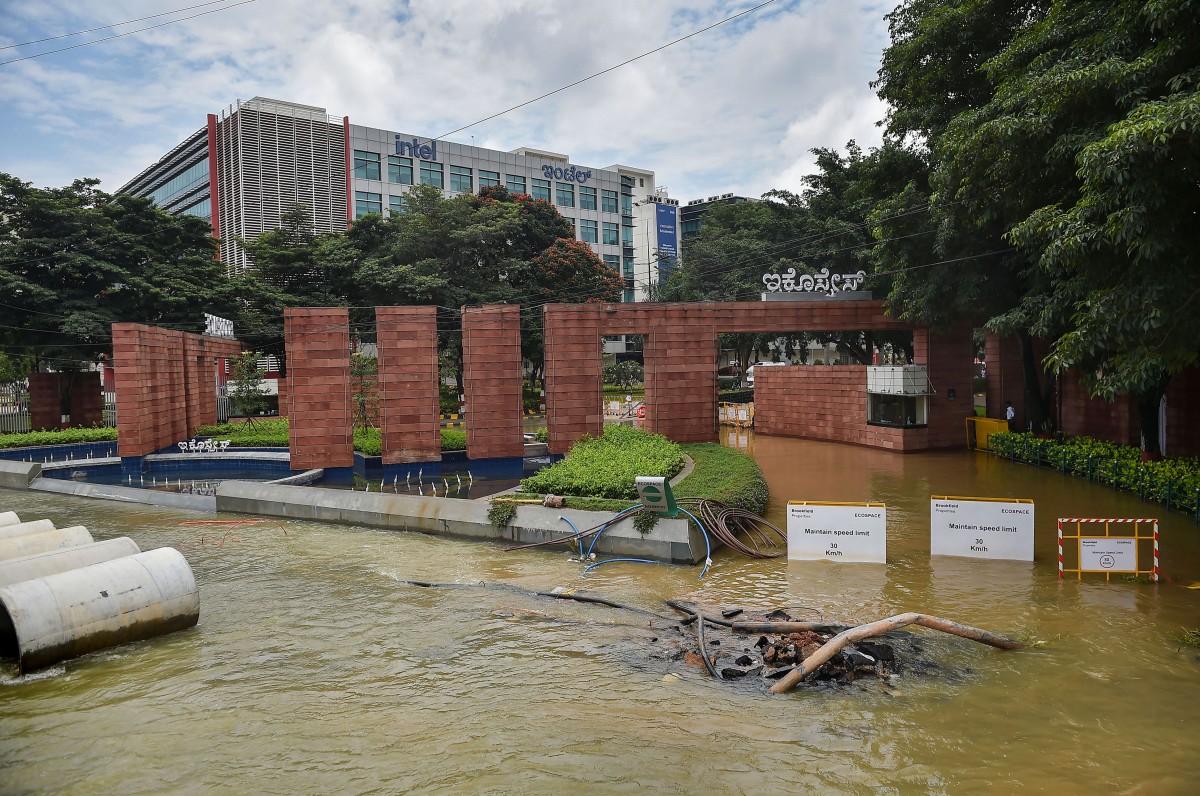 Waterlogging at the entrance of Ecospace in Bellandur on September 6. Photo: PTI/Shailendra Bhojak.

IT industry veteran T.V. Mohandas Pai came down heavily on the Karnataka government regarding its poor management of the flood situation, blaming bad governance, corruption and poor urban planning.

“[The havoc is a] result of ineffective government, bad governance and high corruption. Money is allocated and largely shoddy work due to high corruption, lack of capability in the corporation, illegal construction, the list goes on,” Pai told PTI.

“It also shows lack of urban reforms across all our cities over the last 30 years,” he added.

Meanwhile, chief minister Basavaraj Bommai blamed the JDS-Congress coalition government which succeeded his, citing unplanned administration and the granting of building permissions all over the city without accounting for drainage and buffer zones.

Bommai has earmarked Rs 1,500 crore to drain waterlogged areas and another Rs 300 crore to remove encroachment, according to the NDTV report.

The chief minister will also be meeting Inter-Ministerial Central Teams (IMCT) today to assess the extent of damage suffered in the state due to floods in the months of July and August.