Death by Apathy: The Aftermath of the Malad Wall Collapse

The July 2 wall collapse killed 29 persons and left hundreds homeless. The survivors now face the uphill task of battling state apathy – the very thing that caused the collapse in the first place. 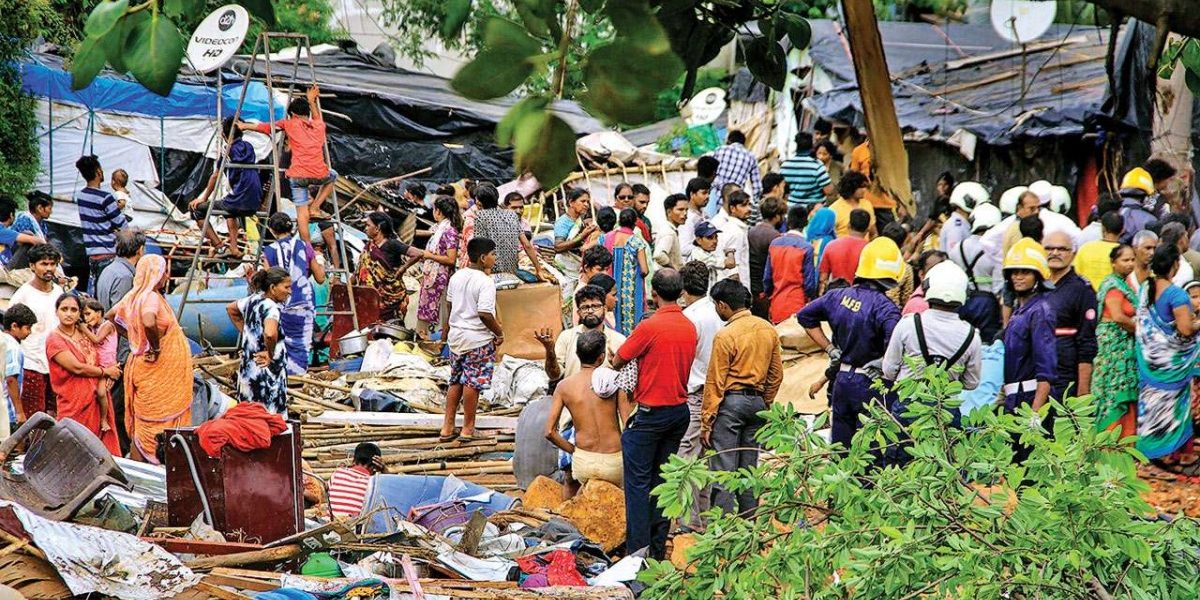 Locals gather at the site after a portion of the compound wall collapsed on shanties adjacent to it, in Malad East on July 3. Photo: PTI

Mumbai: A soft toy lies face down on a heap of debris.

Thirty-year-old Anil Kanojia scours through the wreckage several times a day, but skips the toy. Facing this muddied doll, he says, would be like looking into the eyes of his 17-month-old daughter Jahnavi.

Baby Jahnavi was one among 29 persons, and the youngest, to have been killed on July 2 when a 15-foot wall that was built on an elevation at the edge of a reservoir was breached because of heavy rains. The wall flattened over 150 houses in two slum settlements – Ambedkar Nagar and adjoining Pimpripada – in the Mumbai suburb of Malad. 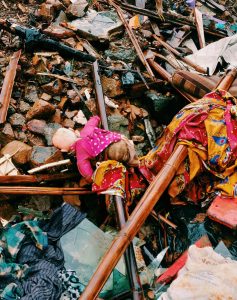 Jahnavi Kanojia, a 17-month-old child, was the youngest victim of the collapse. Her soft toy remains untouched amid the debris where her house once stood.

It has been 15 days, but the homeless residents are still struggling trying to get not just rehabilitation but also relief. Activists and volunteers helping say the authorities have simply abandoned them. The activists blame the municipal corporation for building a shoddy wall with inadequate outlets that would have allowed the water to escape through channels in a regulated flow.

On July 1, it rained incessantly in Mumbai and the western suburbs particularly received over 375.2 mm rain for first time in 45 years. A little after midnight on July 2, when most residents of the slums had gone to sleep, water came gushing downwards, sweeping almost everything along.

The reservoir — built in for several housing complexes nearby — had been breached and the force of water was such that everything below was hit with great force. Some got stuck between nearby poles and trees – the lucky ones who survived even as others were simply swept away.

While some drowned and died, others were hit by the large boulders that were washed down from the hill behind this over 30-year-old slums. Apart from the 29 dead, several of the critically injured were taken to hospitals where a few are still undergoing treatment.

“It was a matter of just five minutes. My wife suddenly sensed water had entered our house and even before she could open the door, we were swept off along with our tin-shed roof,” Kanojia recalls. 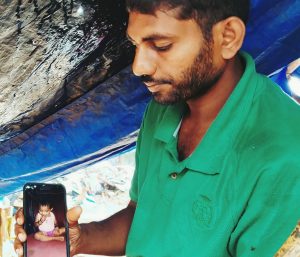 Anil Kanojia showing picture of his 17-month old daughter Jahnavi who died in the wall collapse.

“Jahnavi was sleeping next to me but she was gone before I could reach out for her hand. Jahnavi’s lifeless body was recovered several metres away from her house. According to the hospital record she died due to drowning,” he says.

Next to Jahnavi, her 22-year-old neighbour Sarvan Gaud was found lying dead.

“Woh humari kholi mein soya tha, ussi main dafnaa gaya (he was fast asleep in our house and was buried right under it),” his 55-year-old father Ramakant Gaud told The Wire.

Gauds, a family of seven, lived in a small informal house, mainly held together by tin sheets, with only one 10×20 feet room. Sarvan was sleeping under a metal cot on that fateful day. While others managed to hold on to each other, Sarvan was smashed against the cot, sustaining head injuries.

The Gauds and Kanojias have since been taking turns under a tarpaulin sheet at the spot where their homes once existed. “During the night time, we visit a near by school and return here during the day. All our clothes, documents, gold have all been washed away,” Gaud says.

Gaud, a rickshaw driver, has not been to work since the incident and says all his savings have been exhausted. “I do not know where to begin. How much money can I earn at this age to be able to make a house that took me 30 years to build,” he says.

Most residents of Ambedkar Nagar basti – which has over three thousand families – have been living here for over three decades. The basti, composed of mainly makeshift structures, were to be rehabilitated way back in 1997 following a Bombay high court order. However, it was never acted upon. The majority, belonging to the Scheduled Castes and the Other Backward Classes, have migrated from the northern states of India. Most of them work at industrial units nearby; many are daily wagers.

Residents complained to this reporter of complete neglect in the aftermath of the disaster. “The locals had rushed to the spot minutes after the incident. Each injured person was picked up by the local boys and they walked nearly a kilometre outside the basti to find some transport to take them to the hospital. The police and the BMC reached much later,” Gaud said.

Yogesh, a resident of Ambedkar Nagar and an associate at the Centre for Promoting Democracy – a citizens’ initiative – claims that the Brihanmumbai Municipal Corporation (BMC) had sent its workers to the nearby housing society to clear the accumulated debris first.

Yogesh (centre) and other young volunteers who have been carrying out the relief work.

“We have been living here in this wreckage for days since that night. Whatever we are able to clean up, we do it on our own. BMC has not sent its workers yet,” he says.

Several citizens’ groups from nearby bastis, like a group of Muslim youth and Christian youths from the nearby church, were among those who have been providing food, first aid and other basic utilities required to the affected families. The Buddha Vihara at the Ambedkar Nagar slums has been acting as a relief camp and a place for the community meetings and data collection ever since.

There are other problems too which affected a return to some sort of normal life. At Pimpripada, the only source of fresh water was a well which had abundant water enough for the entire basti. But the well has been buried under the rubble and the water is evidently contaminated. “We are still using this water. We don’t have any other source,” says Kumari Barsati Thatera, a victim.

Yogesh says losing shelter means losing everything that they possessed. “Most of them do not have a bank account. They would store their meagre earnings at home. Their valuables were all in the form of some ornaments or electronic goods. Now all of it is lost.”

Almost all affected families have also lost their vital citizenry documents like PAN and Aadhaar carda, which are going to take a long time to recover.

Ramvikas Gautam, a 37-year-old daily wage worker, lost his two children, his house and all his belongings in the wall collapse.

Thirty-seven-year old Ramvikas Gautam has been at Shatabdi hospital since the incident. His two children – a four-year-old son Maniram and two-and-half-year-old daughter Pratima – were killed in the incident.

Soon after the incident, following chief minister Devendra Fadnavis’ announcement at the state assembly, two cheques of Rs 4 lakh for each child were handed over to Gautam.

However, he has not been able to encash the cheque so far.

Gautam suffered a severe cervical injury and has been awaiting a surgery.

While the state government has announced Rs 10 lakh – Rs 5 lakh by the municipal corporation and another five lakh from the CM’s relief fund – the victims have been getting cheques of Rs 4 lakh.

Vinod Dhotre, the Borivili Tehsildar in charge of compensation disbursement, says, “The department, so far, has disbursed Rs 4 lakh of the CM relief fund to the kin of deceased person and the remaining Rs 1 lakh would be disbursed eventually.”

The municipal corporation says it is working out ‘modalities’ before the money is disbursed.

As for those who lost their houses, the state has decided to only pay Rs 5,000, irrespective of the losses incurred. “These cheques where handed over without taking stock of the situation. How can the state even assume life can be restarted with a meagre Rs 5,000?” asks Jagadish Patankar of the Centre for Promoting Democracy (CPD).

But to get even that money, the victim has to have been mentioned in the police record that was created soon after the incident. Names which the police missed were disqualified for compensation.

‘Both BMC and forest department are responsible’

The bigger question in this whole tragedy is this: why did a wall which was 2.3 kilometres long and built barely two years ago at a cost of over Rs 21 crore give way at all?

Before it, the locals say, the reservoir was protected by a stone wall that was built two decades ago. “The stone wall was strong and we have never had any issue of water logging. The BMC, however, built this killer wall which was haphazardly put together without following the safety process,” says Mayur Tambe, a local activist.

A fact- finding report put together by independent activists and civil society members has also concluded that the mishap was totally avoidable:

“Despite the precarious condition of the tenements, there was no assessment of the risk of rainfall-induced events on the settlement nor were any measures undertaken to alleviate the risk. Instead, a poorly designed wall was built between the settlement and the reservoir plot without understanding the site topography and natural drainage systems, endangering the settlement even more.”

Several victims continue to stay in the hospital as they have no where to go or to take care of.

Citing the May 7, 1997 Bombay high court order, the report further blames the forest department for not rehabilitating those residing on the forest land. The division bench of the Bombay high court had ordered for rehabilitation of residents whose name appeared on the electoral rolls prepared before the January 1, 1995 cut off. The families here have been struggling for their housing rights even while fighting intermittent attempts to demolish their settlements without their rightful rehabilitation.

After neglecting the communities here for decades, the BMC has announced that it would provide around 100 affected families temporary accommodation at Mahul, around 30 kilometres from their original place of residence. The families say it will severely hamper them. Most are dependent on temporary, daily- wage work generated in an around the area.

“We have lived here all our lives and work in this area. Our children study in schools nearby. In the name of rehabilitation, the BMC has made another unreasonable announcement of throwing us far away. This is only an added burden on us,” one of the victims said.