Mumbai: City police has cordoned off the entire Aarey colony area in the Mumbai suburbs of Goregaon following massive protests against tree felling by local residents and environment lovers who had gathered in the area since Friday night.

Police have arrested 29 people and several others have been detained at the nearby police chowkie. Section 144 of the Indian Penal Code, which prohibits assembly of more than four persons in an area, has also been imposed around the colony.

A local magistrate court has sent all 29 activists to judicial custody for five days. Soon after their arrests, the activists had moved court seeking bail. The court rejected their plea.

The agitation began late on Friday night when the Mumbai Metro Rail Corporation Limited (MMRCL), amid heavy police deployment, began cutting trees in the area. Early in the day, the Bombay high court had rejected three petitions filed by different citizens groups against the MMRCL’s decision to fell 2,646 trees in the area.

Aarey, which is considered as a “green lung” of the city, is perhaps the only area that has dense forest cover in the city. Both MMRCL and the BJP government have maintained that Aarey is not a forest area and hence the trees can be axed.

The operation that began around 9.30 pm, went on till late at night. Several residents, mostly belonging to different Adivasi communities, tried to resist the cutting of trees. “At least 300 of them were axed in less than two hours. When we tried to resist, we were pushed out of the area. Now they have cordoned the entire area off and we are not able to even go nearby,” said Sushma Bhoye, a local resident and an activist.

Soon after the MMRCL decided to take this drastic move late at night, several citizens groups and environment lovers took to social media to condemn the move. Shiv Sena leader Aaditya Thackeray, too, tweeted against it.

Several Sena leaders, who had visited the spot have been put under preventive detention, the police confirmed.

These protestors can’t be arrested and filed cases with. It’s a shame if we do that. I call out and request @CMOMaharashtra to look into this and ask the police to not put any cases for people with love for the environment. We’d be hypocritical then at the @UN if we do this. https://t.co/tEFOvB0gNd

As the day progressed and the MMRCL continued to fell trees, petitioners once again moved the Bombay high court seeking a stay until they could file an appeal before the Supreme Court challenging the high court verdict.

Since Chief Justice Pradeep Nandrajog, who had passed the judgment rejecting petitions against the metro project on Friday was not available, the petitioners moved their plea before a Special Bench headed by Justice S.C. Dharmadhikari on Saturday.

The petitioners claimed that they had made an oral request before the presiding court on Friday for a stay. However, Justice Dharmadhikari observed, “There is nothing on record to show that any request was made to stay the operation, implementation and enforcement of the judgment and order, nor was any specific restraint sought. We cannot proceed on any oral understanding. Merely because another bench has been constituted, it would not be proper to grant any relief. The nature of the relief is such that if it is granted, it would directly contravene the observations, findings and conclusions in the detailed judgment.”

This was a last ditch attempt by the petitioners to save over 2,500 trees in the Aarey colony. Activists said that by late afternoon, MMRCL had already cut more than 1,500 trees. This claim, however, couldn’t be independently confirmed, nor did officials divulge numbers.

The Bombay high court while rejecting the petitions earlier, had observed, “The greens (environmentalists) have failed. They have failed in the instant petition because they have lost touch with the procedure to be followed as per law. The clock cannot be put back. We do not make any comments thereon as the petitioner has to now swim or sink before the Supreme Court.”

The court also refused to declare Aarey Colony a ‘forest’ which was one of the primary asks in one of the petitions filed by city-based NGO Vanshakti. The NGO had sought that Aarey Colony also be declared an ecologically sensitive zone, while another petition filed by green activist Zoru Bathena had pleaded that the area be given the status of a floodplain.

A Sena corporator Yashwant Jadhav had also moved court against the Brihanmumbai Municipal Corporation, which is under the control of the Sena itself, for having given the permission to hack the trees. The court has imposed a fine of Rs 50,000 on Jadhav.

Activists have accused the MMRCL of flouting rules and going ahead with the felling of trees even when a mandatory 15- days’ notice between grant of approval to cut trees and the actual cutting was not met. Oppositions have also accused the BJP of violating the ongoing Model Code of Conduct in the state by passing a new order and allowing its execution. 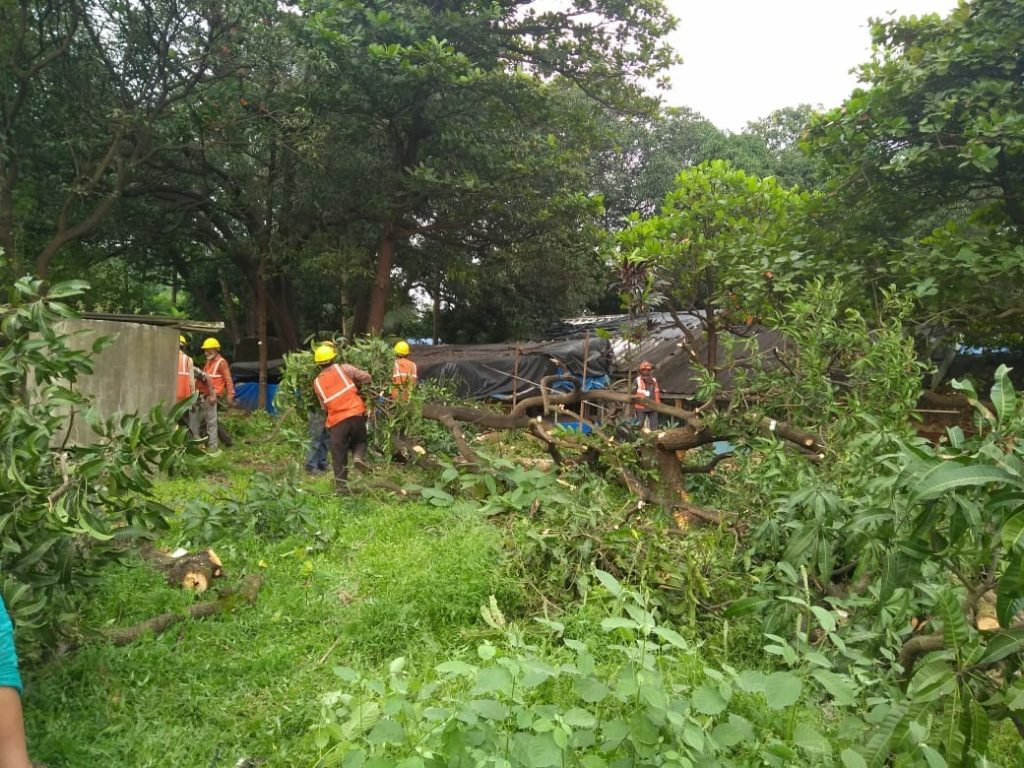 The MMRCL chief Ashwini Bhide, however, claimed that it was false propaganda spread against the high court’s order. “A new false propaganda is in the air that 15 days’ notice is required after a tree authority order is uploaded on the website. This is absolutely baseless. Tree Authority order is issued on September 13, 2019. Fifteen days are over on September 28. Action was awaited until the honourable high court’s verdict was out,” Bhide wrote on her personal Twitter account.

Hon. Bombay HC has dismissed all petitions in unequivocally clear terms 2de. But sm people consider themselves superior 2 Judiciery as well. While their own actions r illegal they city foul. If you lose a battle in court, better to accept it honourably than to take it to street.

Amid the ongoing outrage over tree felling, Union minister Prakash Javadekar in Lucknow said that the cutting of trees for the Mumbai Metro was similar to what was done in Delhi during the capital’s city’s metro rail construction phase.

“Today, Delhi Metro is the world’s best metro. But how did it develop? We had to cut at least 20-25 trees for one metro station. People protested then too; in the same way, they are protesting now. Later, we had planted five trees in place of one. And now, in 15-17 years, they have grown. We successfully constructed 271 stations, too. In this way, Delhi’s forest cover also grew and public transport service was provided to the 30 lakh Delhiites. This is how our ministry works. We work on development along with taking care of our environment,” he said.