Two persons have been arrested in connection with the incident. The owner is reportedly on run. 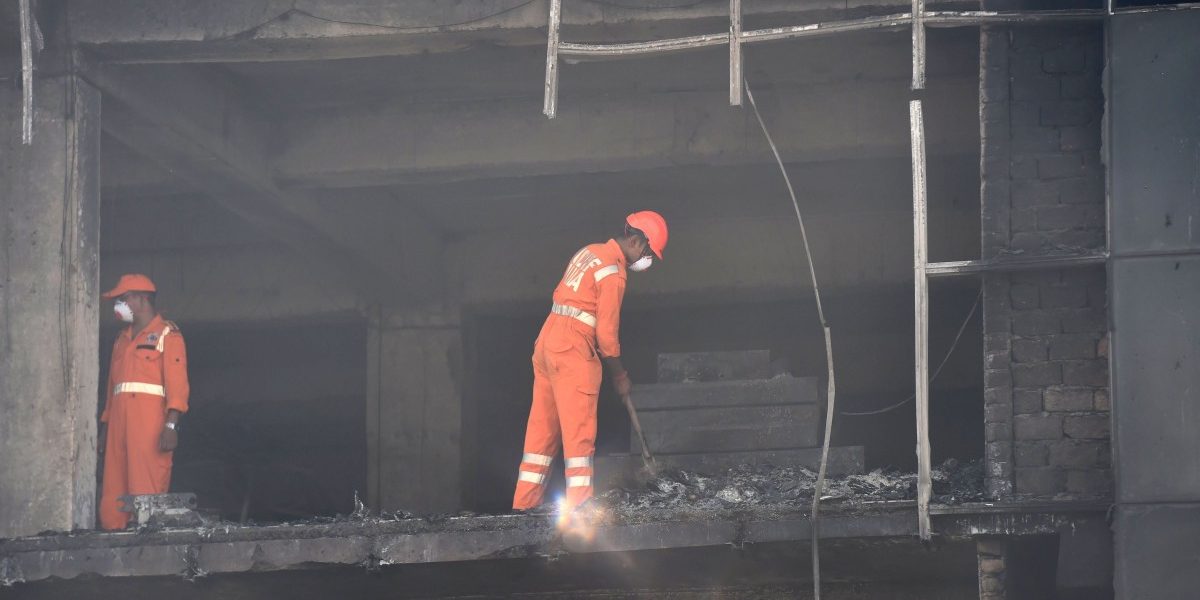 NDRF personnel during rescue and relief work after a massive fire at an office building near the Mundka Metro Station, in West Delhi, Saturday, May 14, 2022. Twenty-seven people have died so far in the blaze. Photo: PTI.

New Delhi: Delhi fire services chief Atul Garg said the building in Delhi’s Mundka where the fire accident claimed 27 lives did not have a no-objection certificate from the fire department and clearance from the Municipal Corporation of Delhi. He also admitted there was a delay on part of his department in rushing to the site due to traffic congestion, Indian Express has reported.

The blaze which started on Friday evening left more than 30 people with severe burns. The police arrested two in connection with the incident, according to NDTV.

Officials say the toll could rise as the search operations are still underway as several are reportedly missing. The injured are being currently treated at Sanjay Gandhi Hospital.

Video clips that emerged online show several trapped inside the building are seen making desperate attempts to escape the building using a rope, hanging from broken windows. Many people could be seen trying to jump to a different building.

According to preliminary information available with the Delhi Police, the building in question was used for commercial purposes such as providing office space for companies, news agency ANI has reported. However, Hindustan Times quoting a police official said the building served as office space for CCTV camera and router manufacturing company.

The owners of the company – Harish Goel and Varun Goel – have already been arrested. However, the owner of the building, identified as one Manish Lakra, is on the run. The building did not have safety clearance from the fire department, NDTV quoted police officials as saying on Saturday morning.

According to Indian Express, Delhi Fire Services rushed 27 fire tenders to the spot to douse the raging flames. “It’s a massive fire. So far, we have recovered 20 bodies from the first and second floors and teams are now trying to reach the third floor. All the bodies are charred,” the newspaper quoted Delhi Fire Services chief Atul Garg as saying on Friday evening.

“Extremely saddened by the loss of lives due to a tragic fire in Delhi. My thoughts are with the bereaved families. I wish the injured a speedy recovery,” Prime Minister Narendra Modi tweeted on Friday night. He said Rs 2 lakh each from the Prime Minister’s National Relief Fund will be given to the next of kin of those who lost their lives, and Rs 50,000 to the injured.

Union home minister Amit Shah said that he is in constant touch with the authorities and that the National Disaster Response Force (NDRF) has been pressed into service.

Delhi chief minister Arvind Kejriwal visited the site and said his government had already ordered a magisterial inquiry into the incident and the culprits will not be spared. He announced a compensation of Rs 10 lakh each for the families of those who were killed. The injured will be given Rs 50,000 each, he added.

The fire is likely to have started on the first floor and spread to the second and third of the four-storied building, according to the Indian Express report.

The police registered a first information report (FIR) under Indian Penal Code Sections 304-A (causing death due to negligence), 308 (attempt to commit culpable homicide), 120B (criminal conspiracy) and 34 (criminal intimidation) at the Mundka police station.

Note: This copy, first published late on Friday, May 13, night, has been updated with the death toll and arrests. It will be updated as soon as new information trickles in.