The Hush Hush Project to Save Kashmir's Wular Lake

The Jammu & Kashmir state government has been working quietly on a huge project to save one of the largest freshwater lakes in Asia. 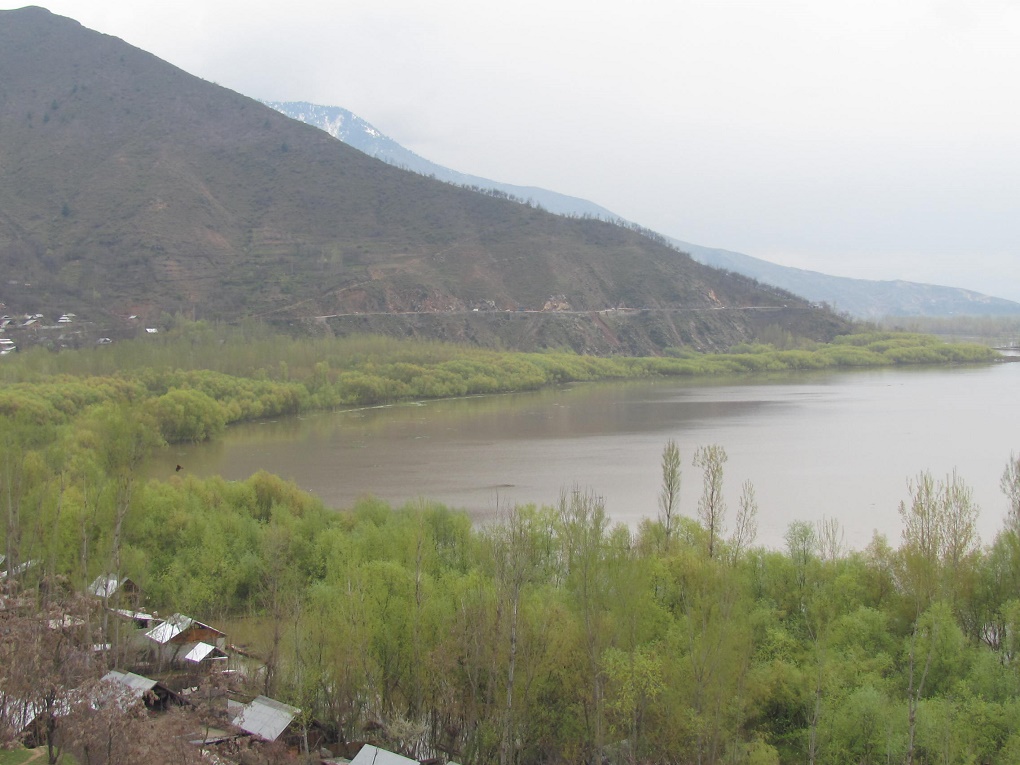 “How long will they remain hidden from the world … the unique gems that Wular Lake holds in its depth,” wrote Muhammed Iqbal, one of the most influential 20th century Asian poets, who was of Kashmiri descent.

Overlooked by magnificent mountains, Wular Lake is one of the largest freshwater lakes in Asia and the largest flood basin of Kashmir in the northern Bandipora district, 34 km north of Srinagar, the summer capital of the Indian state of Jammu & Kashmir (J&K).

Almost a century after Iqbal posed his question, the gems are more hidden, because the depths of Wular have become heavily silted. But engineers at J&K’s Irrigation and Flood Control (IFC) department believe they are quietly pulling off an engineering solution which will reveal Wular’s “unique gems”.

Their optimism is due to their department’s massive Wular Conservation Project. The project, they say, will usher in a long list of benefits including an increase in the lake’s size, eco-tourism, sustainable irrigation, optimum power generation in lean months in downstream hydropower projects, easy navigation and great fish and fodder production, apart from improving the quality of marshy lands surrounding the lake. “This is a step towards the ultimate conservation of the Wular Lake,” said one of the engineers who shared details of the project with thethirdpole.net on condition of anonymity. 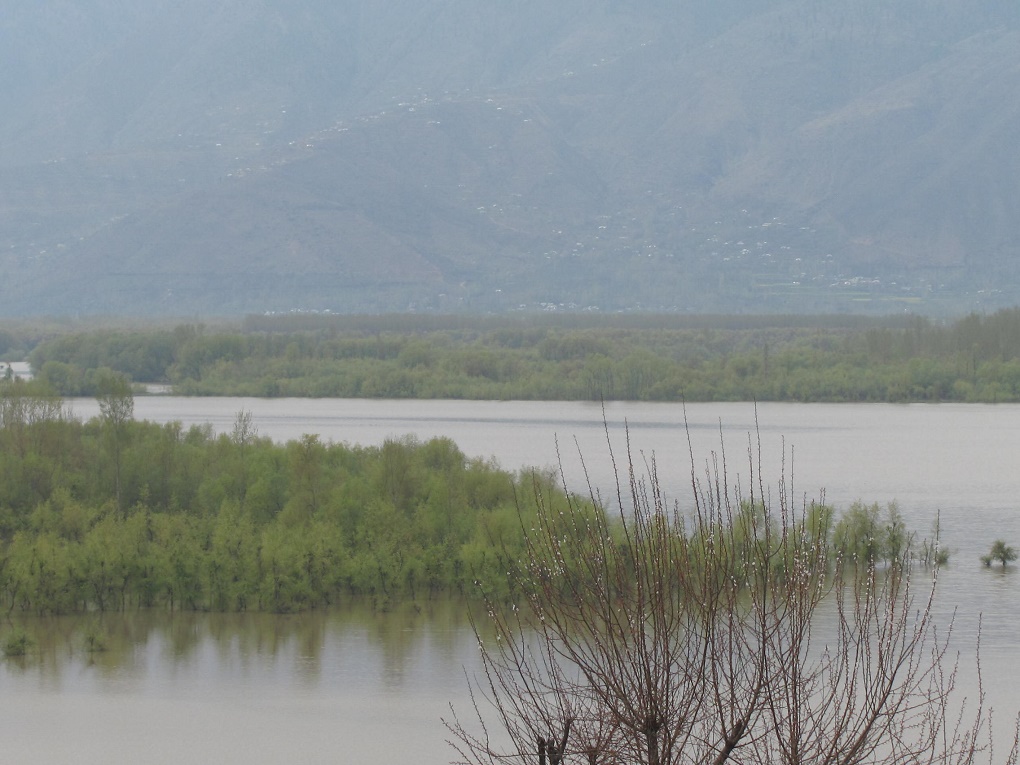 Massive willow tree plantation was carried out within Wular Lake in 1970s as a government policy. The trees are now being removed. Credit: Athar Parvaiz

The project and its promise

The initial work of the project, said the engineer, was funded by the J&K government through an allocation of Rs 800 million. But he said that the major part of the project, which would run into significantly more than that, is yet to be executed.

IFC, according to the engineer, had already completed a significant amount of work at Nengli-Sopore where the Jhelum river emerges from Wular Lake before meandering through the plains and mountains of Baramullah district and entering Pakistan. The work, he said, includes the construction of a 1.5 kilometre long bund and a 112 metre long iron bridge-like structure which were constructed between 2011 and 2014, until the devastating Kashmir flood struck.

“For us, that (2014 flood) was nature’s gift. It was a real blessing in disguise because we had designed the project on one-in-25-years [benchmark of] floods. But the 2014 flood forced us to design the project afresh,” the engineer said. “So, we are now carrying out extensive soil tests before finalising the DPR (detailed project report) for creating the additional infrastructure in light of the lessons we learnt from 2014 floods.”

He said that Wular Conservation and Management Authority (WUCMA) is also doing the conservation work, “but that is just like giving the first-aid to a patient who has got badly injured and fractured.” Samiullah Bhat, who teaches at department of Environmental Sciences in Kashmir University, said rampant poaching, especially of otters and water birds, have critically endangered the biodiversity of the area.

Is the project violating the Indus Waters Treaty?

The IFC officials believe that their project falls within the norms of the Indus Waters Treaty (IWT), which governs the sharing of the waters of the rivers of the Indus basin between India and Pakistan. “Our project is a conservation project and a completely treaty-compliant project. We are not going to raise the water level. We will just maintain the water level,” the IFC official said, adding that it is a “conservational and recreational project”, which would be allowed as “Non-Consumptive Use”.

In Article I of the IWT, clause 11 states:

The term ‘Non-Consumptive Use’ means any control or use of water for navigation, floating of timber or other property, flood protection or flood control, fishing or fish culture, wild life or other like beneficial purposes, provided that, exclusive of seepage and evaporation of water incidental to the control or use, the water (undiminished in volume within the practical range of measurement) remains in, or is returned to, the same river or its Tributaries; but the term does not include Agricultural Use or use for the generation of hydro-electric power.

Article III of the IWT states that India must allow the free flow of the western rivers of the Indus basin “except for the following uses, restricted (except as provided in item (c) (11) of Paragraph 5 of Annexure C) in the case of each of the rivers, the Indus, the Jhelum and the Chenab, to the drainage basin thereof

The IFC, therefore, believes that the project is compliant with the treaty.

This confidence, though, is belied by the secretive way the project is being pursued. Asked about the project, the chief engineer of IFC, Imtyaz Ahmad Dhar, said, “I can’t tell you what we are doing in Wular because we are not doing anything,” and refused to talk further.

On August 27, 2012, a year after the project was started, unidentified gunmen attacked the pillars raised off the embankment and beat the labourers who were camping near the project site and asked them to demolish the pillars. But the project work went on after a paramilitary camp was established at the site to provide security. 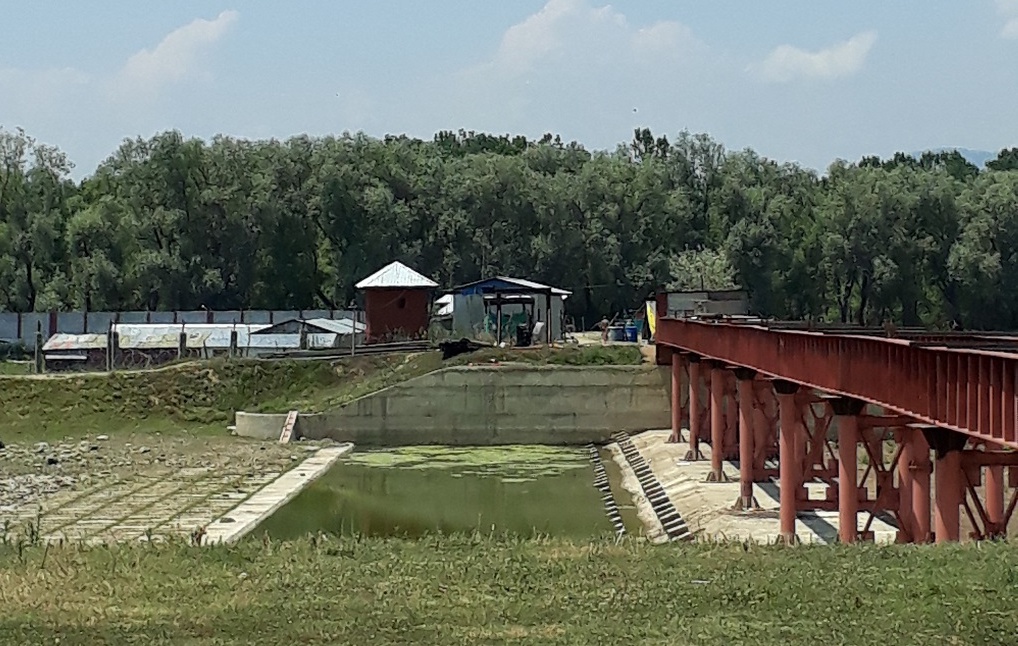 After the attack on IFC project and workers in August 2012, the Wular Conservation project site has been provided security. Credit: Athar Parvaiz

Interestingly, a three-member delegation of Pakistan’s Indus Water Commission, which had visited Kashmir in May 2013 to inspect the water levels in river Jhelum and the status of the Tulbul Navigation project, had not been taken to the IFC project site. The Wular Conservation project of IFC is hardly one and a half kilometre upstream of the Tulbul Navigation Project.

A former engineer, who was among the hosts, told thethirdpole.net on condition of anonymity that the team was not shown the work carried out by IFC at Ningli at the mouth of Wular. “Even if we keep saying that we are just raising the infrastructure to maintain Wular’s water level, they would have certainly challenged our work given the history of water and political disputes and the suspicions about the Tulbul Navigation Lock,” he said.

When relations between India and Pakistan touched a new low last year following militant attacks on Indian security forces in J&K and exchanges of fire at the Line of Control (LoC), India’s Prime Minister Narendra Modi said that “blood and water cannot flow together”.

Ever since, India has made efforts to fast-track hydro power and irrigation schemes in J&K. Official sources in Jammu & Kashmir Power Development Corporation (JKPDC) told thethirdpole.net that they have received inquiries from the central authorities about Tulbul Navigation Lock (project) as well in recent months and efforts are being made to revive the project abandoned earlier.

A top official of JKPDC told thethirdpole.net, “I told the central authorities that the IFC department has already carried out a lot of work. So, there is no relevance of the earlier Tulbul Navigation project which is some 1.5 kilometres downstream of the current project of the IFC.” But he added that a final decision on formally abandoning the Tulbul Navigation Project is yet to be taken. 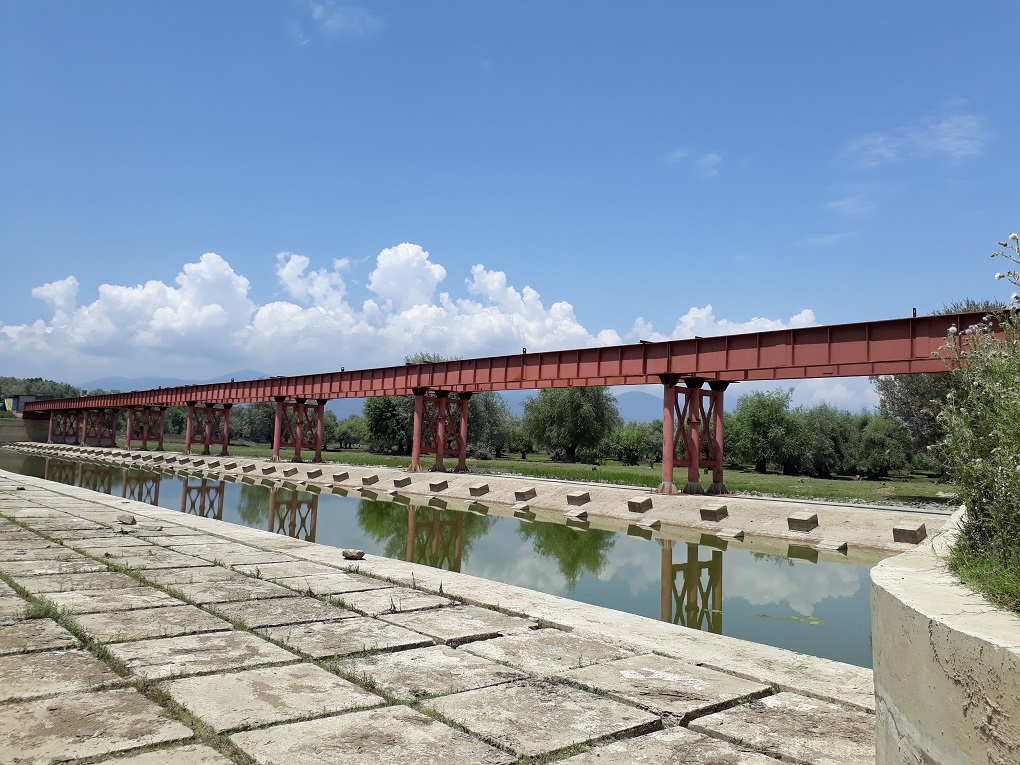 Meanwhile, the work that was previously done has suffered. A senior citizen living in the area, Sheikh Ghulam Mohammad, joked that all those people who live around the Tulbul Navigation Project site have become rich now. “They stole all that iron and copper. There is literally nothing left,” he said.

India had started construction for the Tulbul navigation project in the 1980s and had envisaged controlled release of water from the lake so that it maintains water level in Wular during the lean months from October to February for easy navigation and tourism, contending that IWT has such provisions for non-consumptive use. India also contended that the project is in Pakistan’s interest as well. But Pakistan contested it by saying that the storage and control of water by India has serious implications for Pakistan. The two countries have held several rounds of talks over the issue since 1990s, but have never arrived at a consensus.

Irfan Rasool, a Forest Conservator who oversees the WUCMA project, told thethirdpole.net  that WUCMA has already finished the first phase of the conservation project and is about to start the second phase.

According to Rasool, the second phase of the conservation work involves an Rs 4 billion project which will be started in September this year. Through this project, Rasool said, more than two million willow trees, which had been planted in the lake area through a government policy in the 1970s for energy and industrial needs, will be removed (34,000 willow trees have been removed during the first phase) apart from de-silting five square kilometres of the lake area and creating embankments on the 34 kilometre periphery of the lake. The willow plantation had led to fragmentation of wetlands, rapid siltation, water quality deterioration and social conflicts, says the Wetland International report. 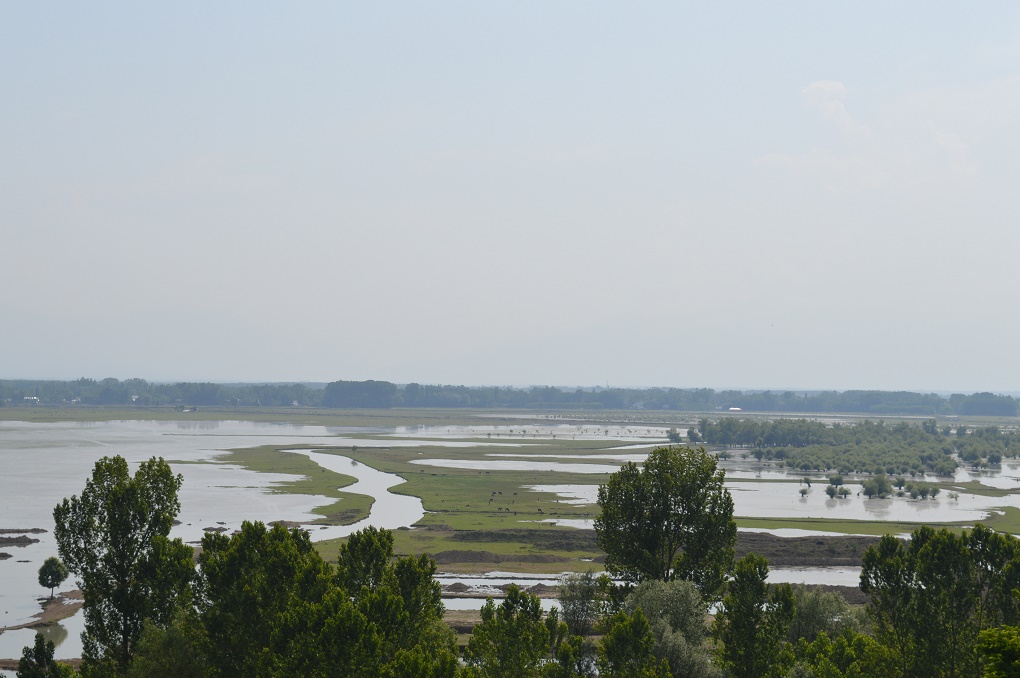 At many places, animals graze in Wular’s interiors because of silting up of the lake. Credit: Athar Parvaiz

“We are hopeful that this work will not only help restoring the glory of the lake, but would also attract tourists as we are planning to convert the embankments into boulevards in the third phase,” Rasool said.

Samiullah Bhat of Kashmir University said that the improvement in water-holding capacity of the lake will certainly give a huge boost to fish production and other important species of fauna and flora. “Apart from increasing fish, chestnut and fodder production, it is going to help water birds which visit the lake and thrive on it.”

According to him, conservation of Wular is crucial as unabated shrinkage of the lake has already started causing environmental and livelihood related problems. “For example, people whose livelihood depends on fish catch have complained in recent years about dwindling fish production,” Bhat said.

However, Bhat is not sure as to what extent maintenance of water level in Wular can benefit downstream Pakistan. “If we say that it can provide environmental benefits to Pakistan, I think Jhelum is already doing that because it never goes dry, even if water levels recede from October until spring. But, it can help Pakistan in terms of power production during the lean months of October to February from its power projects downstream. Water would be released from Wular in lean period for power generation in Uri power projects. But it depends upon how and when the water is released.”

So far, though, it is unclear if Pakistan will see this as a win-win, unlike the Tulbul Navigation project it had objected to so vociferously before.