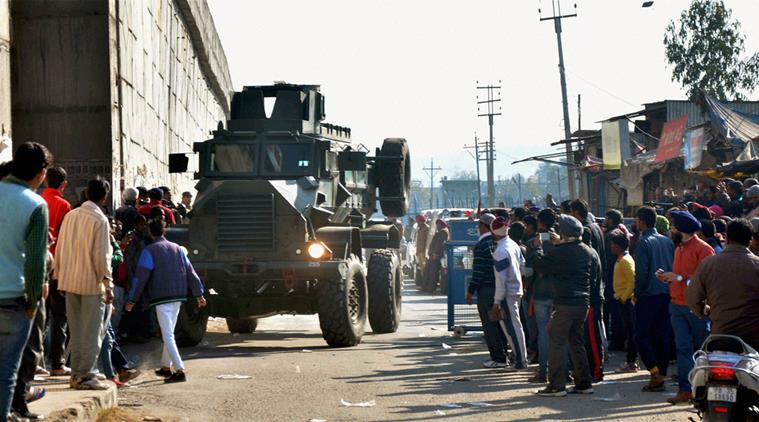 Pathankot: An armored vehicle moves near the Indian Air Force base that was attacked by militants in Pathankot, Punjab on Saturday. PTI Photo (PTI1_2_2016_000051B)

Predictably, the long-drawn out militant attack on the Pathankot airbase has generated waves of criticism across the country with some finding fault with the government’s handling of the issue, and others questioning the entire rationale of Modi’s Pakistan strategy and focusing on the conduct of operations in Pathankot.

Let us get one thing out of the way first. Despite the headlines, the Pathankot event was nowhere near as deadly as the Mumbai attack of 2008, or, in terms of symbolism, the Parliament attack of 2001. And so, the failures and missteps should not be exaggerated, though we need to draw operational and tactical lessons from the handling of the event.

Importantly,  seven lives were lost, at least five of them due to what Defence Minister Manohar Parrikar said was, “bad luck”. A better way of putting it would be to say “bad operational procedures and tactics.” The government has taken great pride in declaring that no strategic asset was lost. Actually there were no “strategic” assets there. Some old Mig-21s and Mi-35s can hardly be given that category. Their loss would have been embarrassing, but hardly catastrophic. The most important achievement was  that in a place where some 3,000 civilian families live, not a single civilian life was lost.

In conducting a post-mortem of the Pathankot episode, it is important to keep three levels in mind—the strategic, the operational and the tactical. Contrary to popular perceptions, India does have a doctrine in place in dealing with Pakistan. This has, like all doctrines, been shaped by experience, circumstances and geography. Essentially, as practiced by successive prime ministers since Rajiv Gandhi, it involves engaging Pakistan in a process through which  a “normal” Pakistan will emerge,  even while withstanding the blows that Pakistan rains on us. In this process we are not alone, indeed, the entire world community is looking for this transformation because all of them are affected by Pakistan’s use of terrorism as an instrument of state policy. Our policy is not some version of Gandhigiri, but one born out of prudence and practical experience, and one that has, in the years that it has been in place, led to the successive weakening of Pakistani belligerence, and a strengthening of India’s global stature. It has also seen — and many hawkish commentators seem to be unwilling to see this — a steady decline of violence originating in Pakistan.

Hawks want India to adopt an offensive counter-terror doctrine a la Israel or the US. But all you have to do is to take an honest look at what the Global War on Terrorism (GWOT) has wrought in Iraq and Afghanistan. As for Israel, despite using multiple sledgehammers to kill the Palestinian flies, Israel has not managed to secure itself.

The Indian “doctrine” may not have been as “sexy” as that of the Americans and the Israelis, but it is seductive enough for some Indians who do not realise that were India to adopt a a tit-for-tat  covert war on Pakistan, it could well tip it over the edge, just as the Americans and Europeans tipped Iraq, Libya and Syria to perdition. A strong Pakistan is not in our interest, but nor is a Pakistan that has come apart and which is our nuclear-armed neighbour.

So, the key lesson here for us is that despite years of experience we have not been able to fabricate a sturdy shield, which is so vital for our policy of engagement. This is borne out best by this region itself where in since September 2013, there have been five similar instances of penetration by groups of militants who are usually dressed in combat fatigues and who hijack passing vehicles and attack military or police targets. This is unforgiveable and successive governments are responsible for this. The shield plays a key role in our Pakistan strategy, and minus it we are condemned to suffer multiple incidents of the type we are witnessing.

The second issue is the operational level handling of the event. Even now, it is not clear who was in charge of the Pathankot counter-terror operation—NSA Ajit Doval in Delhi , Western Air Command chief S.B. Deo who has been despatched to Pathankot on the evening of Friday, the base commander, Air Commodore, J S Dhamoon who actually should have been in-charge, or the NSG officer Maj-Gen Dushyant Singh, who, too, had parachuted in from Delhi. Was it the Home Secretary Rajiv Mehrishi, whose briefing to the media was pathetic, to say the least, or Defence Minister Parrikar who finally landed in Pathankot on the fourth day accompanied by the Army and Air Force chiefs? As for the Punjab Police, who should have been in the forefront, they have neither been seen or heard, but for the hapless Salwinder Singh, SP of Gurdaspur.

Not all terrorist strikes can be handled in this way. While we do need operational flexibility in handling such events, there is need for clear lines of managerial authority. In this case, the following is obvious:  the base is Union government property, the surrounding country-side belongs to Punjab state and the border, again, is managed by the Union government’s border guarding forces. Surely by now we should have has standard operating procedures in place to ensure that these forces could have operated in concert. This is also very close to an operationally important part of the border which has seen war in 1965 and 1971, surely there must be some procedures that kick in when hostilities begin. Could they have been replicated?

But that wasn’t the case. According to reports, a high-quality intelligence input was received some time at the end of December indicating the possibility of such an operation. An alert was issued to various institutions, but it does not seem as though the BSF on the border, or the Jammu & Kashmir and Punjab Police, were up to scratch. Considering this is the fifth similar attack in this area since September 2013, the most recent being the Dinanagar attack of July 2015, it is inexplicable as to why the gaps in the fencing and surveillance systems had not been addressed, and in this case, why there was no aggressive patrolling of the hinterland following the intelligence tip off.

Why send in NSG from Delhi?

The actual conduct of the counter-militant operation has brought out its own set of problems. For example, why did the Union government send in the National Security Guards from Delhi, when this is one of the most densely defended areas opposite the Punjab border with troops, experienced in counter-insurgency, all over the place. The NSG have been trained in counter-hijack and hostage rescue operations, but according to Mehrishi’s press conference, the  encounter with the main group of militants took place in serrated terrain covered with jungle and scrub where our Army would have been in its element. There is, though, an intriguing Mail Today  report claiming that a unit of the J&K Rifles is the one that gunned down three of the four militants and that the other two were killed after an Army BMP was used to blow up the building they were sheltering in.

Even now it is not clear as to when the  NSG was actually employed. Though it had arrived on Friday evening, there is a report which says that they were only deployed after the militant unit was located. With the availability of the NSG and the Army, it was unconscionable of the local commanders not to get the DSC out of harm’s way. “Bad luck” is no explanation for their deaths, which were really because of poor tactical appreciation.

This poor appreciation also seems to have tripped up the local commanders, the NSG chief and his Inspector General, into declaring all clear on Saturday evening. Because unbeknownst to them, two more militants were in the compound and had sufficient arms and ammunition to cause mayhem.

All this suggests that there is need for a commission of inquiry into the event and its handling. This should be more by way of learning lessons, rather than apportioning blame. To repeat, the incident is not in the category on the Mumbai attack. And in this case, there has been no torrent of denials from Pakistan. Indeed, the Sharif call and the statements of the Pakistan foreign office have calmed the atmosphere a great deal.

Perhaps the biggest takeaway from this should be that once our policy lines are set — and Modi seems to have set those lines when he said “We are engaging Pakistan to change the course of history” at a meeting of the Combined Commanders of the Indian military on December 15 —  episodic events should not be allowed to derail them. Pakistan is our neighbour, a large nation with a huge army and armed with nuclear weapons. You can neither coerce Pakistan, nor ignore it because whether it fails or succeeds it impacts on India. The only option is engagement, but at the same time, don’t forget that shield.