Nearly 12 million Indian children were married before the age of 10 years, 84% of them Hindu and 11% Muslim. 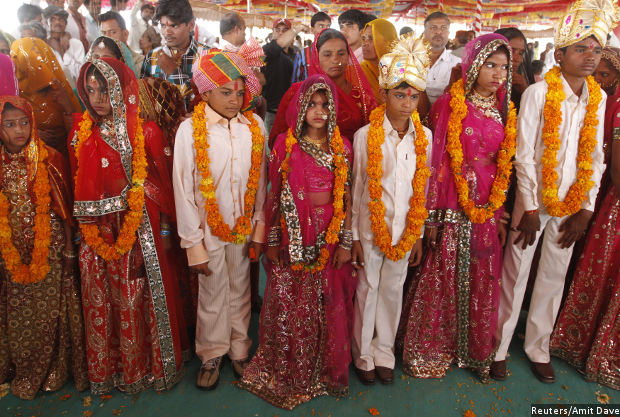 Nearly 12 million Indian children were married before the age of 10 years, 84% of them Hindu and 11% Muslim, reveals IndiaSpend analysis of recently released census data.

To put it in context, this number is equivalent to Jammu & Kashmir’s population.

As many as 7.84 million (65%) married children were female, reinforcing the fact that girls are significantly more disadvantaged; eight in ten illiterate children who were married were also girls. The data further reveal that 72% of all Hindu girls married before ten were in rural areas, as compared to 58.5% Muslim girls, with higher levels of education correlating with later marriage.

Jain women marry latest (at a median age of 20.8 years), followed by Christian women (20.6 years) and Sikh women (19.9 years). Hindu and Muslim women have the lowest median age at first marriage (16.7 years), IndiaSpend reported earlier based on a seven-state report from Nirantar, a Delhi-based advocacy group. As many as 5.4 million (44%) married children under ten were illiterate, 80% of them female, indicating how lower levels of education correlate with early marriage.

As many as 1,403 females have never attended any educational institution for every 1,000 males who have not, IndiaSpend reported earlier.

Better and safer job opportunities for girls may also reduce child marriage, as might better access to basic infrastructure (water, electricity), which frees up time spent on domestic chores for schooling, wrote Wodon. The Prohibition of Child Marriage Act states that a girl in India cannot marry before age 18, a boy before 21.

A Muslim girl can marry when she attains puberty or completes 15 years of age, according to Muslim Personal Law, the Gujarat High Court and Delhi High Court noted in different judgments.