Altaf Thakur speaks to The Wire about Jammu and Kashmir's statehood and the saffron party's future in the region. 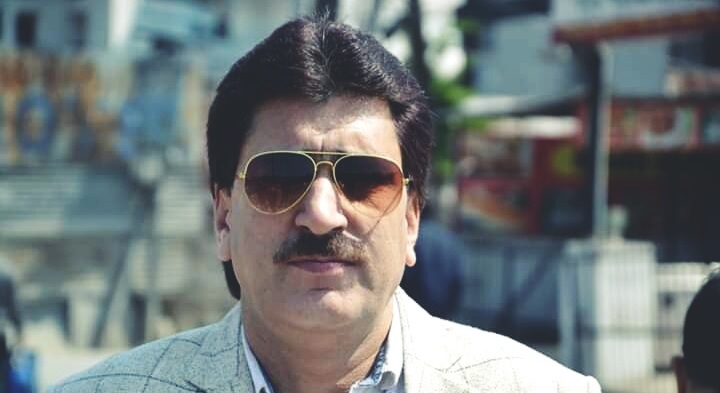 Srinagar: A spate of attacks on members of the Bhartiya Janata Party (BJP) in Kashmir during the past few weeks has sparked fear among the party’s workers, with many submitting their resignations or publicly disassociating themselves from the saffron party.

The Wire‘s Irfan Amin Malik spoke to Jammu and Kashmir’s BJP spokesperson Altaf Thakur, who is also the head of panchayat affairs about this issue and others. Thakur talks about the BJP’s strategy to counter the militant attacks on its members, the current and future prospects of the party in J&K, the ‘Naya Kashmir’ doctrine of Prime Minister Narendra Modi and much more. Edited excerpts follow.

During the past month, five BJP workers have been killed by militants in Kashmir. The situation has caused fear among your workers, many of whom are submitting resignations. How is your party dealing with this situation?

Despite losing our Bandipora chief Wasim Bari, his family members and other workers, the morale of our party workers is high. These killings have not let us down and the spirit of our workers is taller than the Himalayan Mountains.

But yes, some new workers have resigned from the party, not those who have been associated with us for many years. BJP workers believe in the nation first, party second and self last. Therefore, the situation has not yet arisen for us to reassure our workers.

You need to understand that this is not an unprecedented situation for us. Right from 1996, our workers are being attacked by militants across the valley. So far we have lost 23 workers. But yes, in the past two years, there has been an increase in militant attacks on us. It won’t be wrong to say that the last two months have been the deadliest for us and we have unfortunately lost five workers.

For the past ten years, Kashmir has witnessed a spate of militant attacks on panchs and sarpanches. Governments, including the present dispensation which reports to the Centre, have failed to provide security cover to their own party workers. Why is this so?

You need to understand that security is provided on the threat perception and vulnerability of a worker. The BJP has 7.5 lakh members and providing security to all is impossible. So far, we have provided security to senior members only.

Our general secretary Ashok Kaul sent a proposal to party president J.P. Nadda and the chief secretary of J&K to provide space for our workers in district headquarters. But again, this is a temporary arrangement and the permanent solution is to eliminate the militancy so that there is no need to have security. 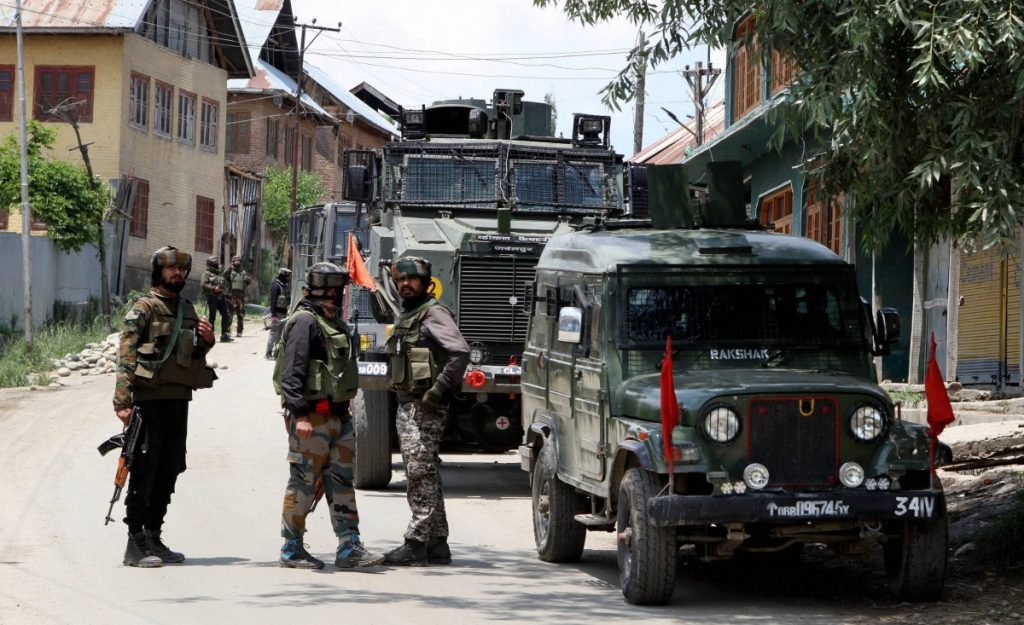 Jawans stand guard during an encounter with militants in the Kangan area of Pulwama district of south Kashmir, June 3, 2020. Photo: PTI

During this year, the graph of the militancy has fallen sharply and during the past six months, more than 140 militants were killed. Recruitment by militants this year is also very low. Because of their low number, militants are frustrated and resorting to these attacks on innocent workers. These attacks are meant to cause fear among workers. They are trying to recreate their base, which is not going to happen anymore. Our security forces, including the police, are vigilant enough to combat militancy in the Valley.

However, security cannot be provided to each and every political worker. Security is provided by the government based on intelligence reports and threat perception.

During the past couple of days, BJP panchs, sarpanches and workers are being taken to hotels and government buildings guarded by paramilitary troops. Do you think that this will have an impact on the BJP’s political activity in the long run? By keeping your workers away from the people, how will they make their presence felt?

Frankly speaking, this is just a temporary arrangement to deal with the current situation. The permanent solution will be to eliminate all the militants in Kashmir. The BJP always wants our workers to be present on the ground to resolve public grievances. But right now, the government is trying to safeguard the lives of our workers by putting them in district headquarters.

We have seen that sometimes, the militants target the family members of workers or hurl grenades at their houses. How is the government going to deal with this threat?

We have already discussed this matter with the government. So far, we feel the families are not a target for militants and no family has been attacked or by militants. In 2017, when militants kidnapped the families of police officers, it was the beginning of the downfall of the militancy in Kashmir. To every action there is an equal and opposite reaction, therefore if militants involve the families of our workers in their violence, they too will pay a huge price and will be completely wiped out. I must say it loud and clear, oppression does not last long and there is an end to it.

The Congress, on the other hand, has claimed that the ruling government has favoured a particular class of workers and deprived the workers of the Congress and other parties of adequate security.

The BJP has said it time and again that adequate security should be provided to all political workers, irrespective of their party. We never favoured our workers and deprived others. In fact, we have been demanding that security should be given to those political workers or leaders who are vulnerable. But leaders from the opposition parties should understand that right now, BJP workers are the main target and therefore they need security. The Congress must know that we have lost five members during the past month.

Why are BJP workers being targeted by the militants?

The answer is quite simple: We managed to become popular and receive public support. You will be surprised to know that we have 7.5 lakh members in Jammu and Kashmir. Another reason is that we have exposed the local mainstream political parties, who were only showing unfulfilled dreams to the people. During all these years, they have been making false promises to the people to bring ‘self-rule’, restoring autonomy, etc. We have closed their shop and now it is ‘one nation, one law’.

How do you see the future of the BJP in Kashmir, because of the Centre’s decision to revoke Jammu and Kashmir’s special status and bifurcate the state into two Union Territories?

People of Jammu and Kashmir are well aware that Article 370 has done no good. Instead, it has caused more harm. Nevertheless, the Central government on the floor of the house has assured that statehood will be restored, which will happen in due course of time. The future of the BJP is bright and I am confident that the next chief minister will be from the BJP. 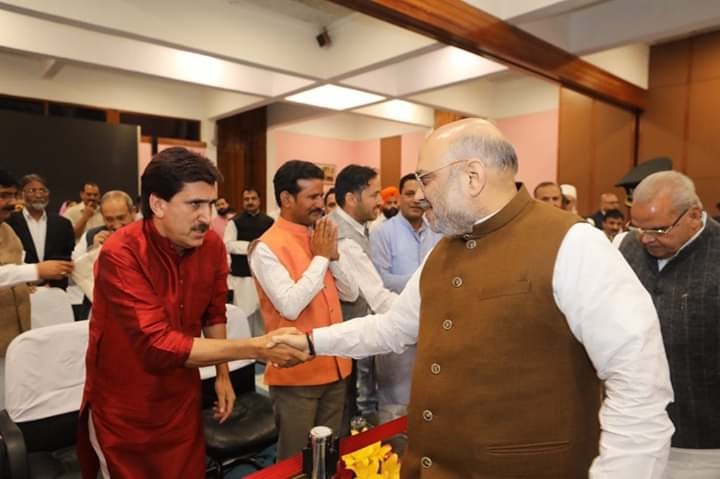 It will solve not just this issue, but will give rights to those who are victims of discrimination. If Manmohan Singh, who was born in present-day Pakistan, can become the prime minister of this country, then why shouldn’t refugees, downtrodden people and other migrants have this privilege?

The people of Kashmir are clueless about “Naya Kashmir”. The young generation of Kashmir says they do not feel any difference between the Kashmir before August 2019 and after it. As a leader of the BJP, how and where do you see “Naya Kashmir”?

Naya Kashmir can also be seen in the construction work of the Z-Morh tunnel. I could see a Naya Kashmir when this week, the government announced 14 Kendriya Vishwavidyalaya schools for Jammu and Kashmir. More so, the Naya Kashmir vision allowed the Block Development Council (BDC) elections to be held here for the first time. And Naya Kashmir can be seen this year in the 16 residents of J&K who qualified for the Union Public Service Commission (UPSC) exams.

Many critics, including local mainstream political leaders, accuse the BJP of playing communal politics and of having prejudice and hatred against Muslims. They say it is aiming to change the demography of Kashmir to turn it into a Palestine. How would you respond to those critics?

Show me a single place where the demography has changed in the past year. The demography of Jammu may be affected because people have come from different places to settle there. In Kashmir, however, there is no concern at all. Now, if other parties are accusing us of playing communal politics, they should show one episode of communal violence in J&K. The BJP believes in ‘Sab ka saath, sab ka Vikaas‘. Our PM often use the term 120 crore Indians, he never says Hindu, Muslim, Sikh or Christians. There are various rumours making the rounds about the Centre’s plan to restore statehood and 4G internet services and other things. What are the actual plans of the Modi government?

In the presence of PM Modi, home minister Amit Shah, on the floor of the parliament, promised that Jammu and Kashmir will get back the status of statehood. Let us hope this happens very soon. Now talking about the restoration of 4G service, it has to get a green signal from the security agencies. If 4G has been suspended due to security reasons, the people should not be impatient because it will be restored. Let me tell you that the 4G ban should not be an issue right now; the main issue is COVID-19. The focus right now should be on the establishment of COVID-19 treatment centres, adequate health systems and strengthening the health infrastructure.