Concerted efforts from all concerned stakeholders is crucial at this juncture. 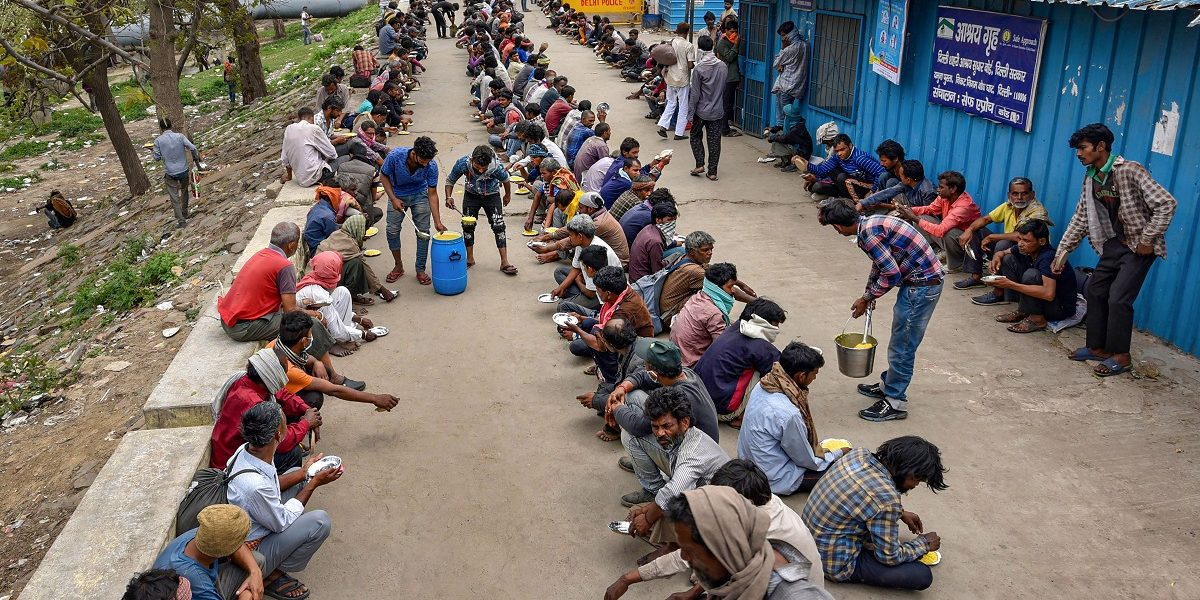 The Supreme Court of India mentions that the right to dignified shelters is a necessary component of the Right to Life under Article 21 of the Constitution of India.

While the government aims to ensure every citizen has a home by 2022, the number of families that live on the streets of urban India grew between 2001 and 2011.

On the other hand, the share of the houseless population was 0.19%, which declined to 0.15%, a significant fall in the decadal growth of the total homeless population of India. A drastic decline in the homelessness is found in rural areas. However, homelessness is more distressing in urban regions of India. It is interesting to note that even though the absolute number of houseless household increased, the mean size of these households shrank between the census decade. In 2001, the average household size was 4.34 in India, which fell to 3.90 in 2011. This is more noticeable in urban India as the numbers went down from 4.14 to 3.70. Thus, it can also be inferred that some individuals might have abandoned their families or drifted away from them.

In contrast, the houseless situation in urban India represents that it is no longer a metropolitan phenomenon; homelessness is densely growing.  However, all the major metropolitan cities are contributing significantly higher numbers of the houseless population. Similarly, the highest concentration of houseless population was observed in the districts of Kanpur followed by Kolkata, Mumbai, Surat, and Hyderabad.

The findings of our study show that the maximum concentration of homelessness is observed in the megacities of India. A significantly positive correlation (r=0.5044, p<.01) is found between urbanisation rate and percentage homeless at the state level. Besides, those who are socially and economically deprived in these cities are ‘doubly marginalised’. In this sense, they become ‘urban apartheids’. 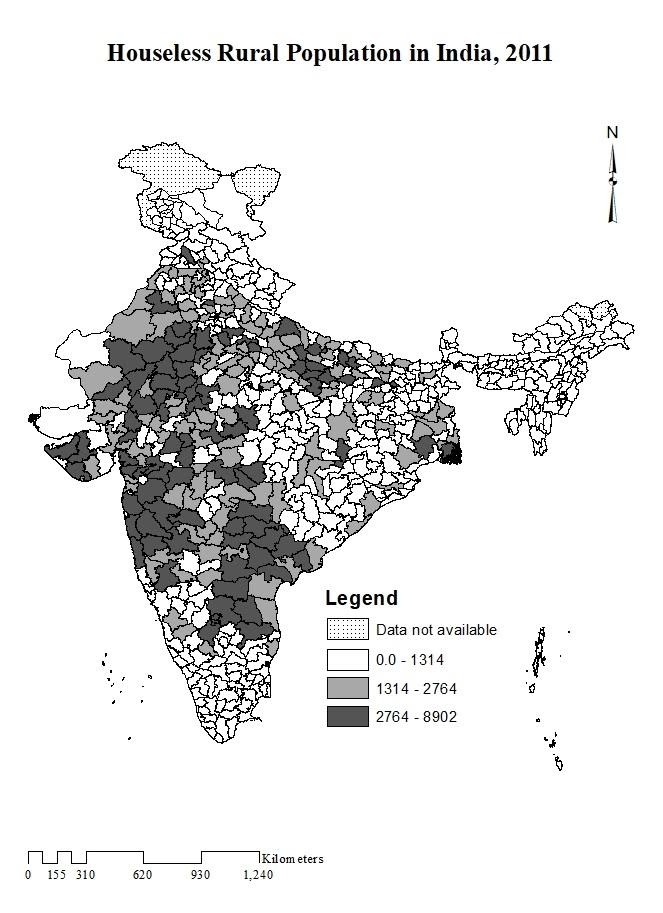 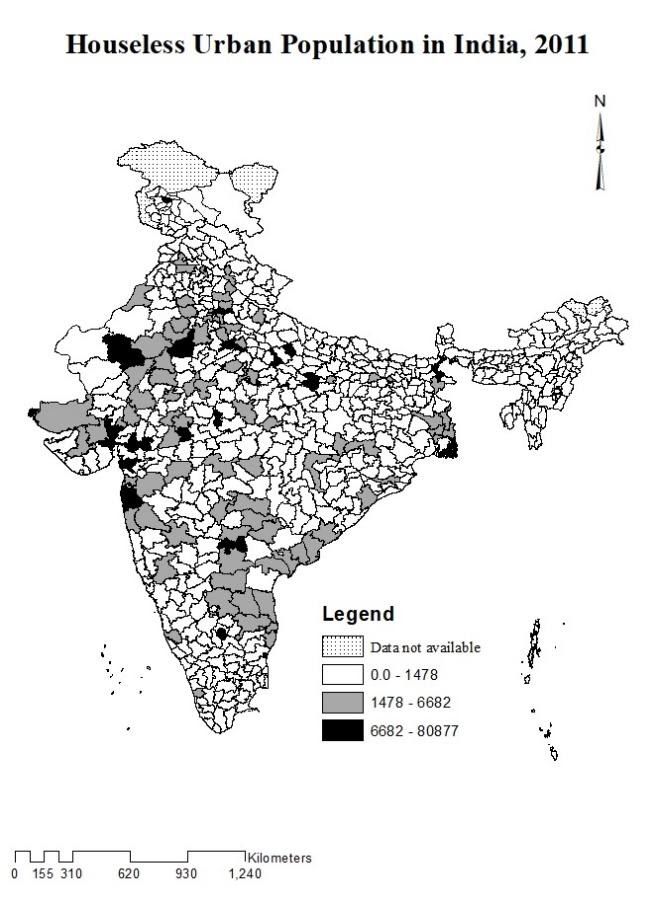 To provide shelters for the homeless, the most critical scheme launched by the government of India is Deen Dayal Antyodaya Yojna-National Urban Livelihoods Mission (DAY-NULM). However, the road map for providing shelter to every homeless in the country depicts a gloomy picture. According to the 2011 Census, there are 9.25 lakh homeless people in the urban areas. The total capacity of shelters created under DAY-NULM is 1.09 lakh. Thus, there are 8.15 lakh urban houseless people who do not have access to shelters or only about 11.86% of urban homeless have access to a shelter house. Further, the DAY-NULM data also shows that the funds allocated for the creation of homeless shelters remain inadequately utilised.

Looking at the employment conditions of the houseless population, data reveals an impressive result, the Work Participation rate of homeless is higher (51.9%) than that of the total population of the country (39.7%). However, it reflects distress participation or merely to work for survival—the majority of the homeless population in India fall in the category of main workers.

Homelessness in the times of Covid-19

Inadequacy of reliable numbers of the homeless population and abdication of accountability towards them, the homeless appear to be neglected in public policies. It is evident that homeless people are subjected to systemic negligence and multiple vulnerabilities. The Covid-19 pandemic has further added to their miseries.

WHO suggested that social distancing, hand washing and respiratory hygiene are crucial to contain the current pandemic. The available literature shows that homeless people severely lack fundamental human necessities. In this condition, it would be insensitive to expect them to follow such precautionary measures without adequate support which is largely missing on the part of the state and civil society.

Self-isolation and home quarantine are necessary conditions to flatten the curve. However, the ‘stay at home’ instructions becomes an oxymoron when it comes to homeless households. It is difficult for the homeless folks to find space for accommodation on the streets lets alone a decent house to stay. Besides, it is almost impossible to practice ‘social distancing’ in informal settlements and homeless clusters and shelters.”

Further, health experts suggest that individuals with low immunity are more susceptible to the Covid-19 virus. The homeless people suffer from the poor standard of living, which lead to compromised immunities.

They have already suffered due to initial lockdown as thousand were stranded and have compromised their dignities while commuting from one place to another. Besides, hunger and malnutrition are widespread among them. In this case, they are bound to lead a miserable life due to lack of income assurances and other social protection measures. Further, there is also stigma attached to the homeless as they are the prime carriers of the virus from the urban areas to rural areas, which have further led to their marginalisation and exclusion.

An analysis of states’ circulars regarding the provision of lockdown relief for the poor suggests that there is hardly any mention of the word ‘homeless’. Only Delhi, Maharashtra and Kerala talk about health check-up and some safety provisions for them. In addition, homeless households often lack necessary documents to access relief measures concerning, food, shelter, health, hygiene and livelihood. Moreover, with no money in hand, they have become vulnerable victims of the virus.

Not all those who are homeless are classified as vagrants or destitute. Census 2011 classified 1 out of 5 individuals as beggars and destitute. The remaining are either migrant workers with no home or nomadic tribes who ply their trade on the streets.  Thus, the livelihood situation has become worse among the homeless; consequently, their very survival is at stake.

Also, there has been reporting of insufficient testing among them, leading to under-detection and neglect. Given poor public health infrastructure, the majority of the homeless may not be able to afford treatment if the virus infects them.

Concerted efforts from all the concerned stakeholders – government, civil societies and civil society organisations involved for the basic rights of the homeless, is crucial at this juncture. Primary prevention from homelessness could be affordable housing, social housing, creating employment opportunities and demolishing discrimination. Not only the government should create physical infrastructure and secure basic amenities but also need to focus on improving, maintaining and monitoring the existing ones. It is also required that the government should abide by guidelines laid down by the Supreme Court and follow the necessary recommendations concerning the homeless. Thus, the government should devise both the short term and long term measures.

The government should utilise the schools, college buildings and community spaces to provide immediate resort to the houseless. Further, temporary shelters may be set-up based on their needs, and basic amenities should be ensured. The homeless should be provided with reasonable resources to maintain sanitation and hygiene.

In addition, they should be sensitised and educated about precautionary measures. Further, the bureaucracy in-charge should be streamlined. A separate helpline number may be issued at the district level to cater their several basic needs. The studies also show that about one-fifth of the homeless suffer from mental illness and substance abuse. Therefore, mental health support could be made accessible.

The United Nations’ Special Rapporteur on Adequate Housing viewed that being evicted during the pandemic is a “potential death sentence”. There have been instances of forced evictions in the urban settlements, and it should be put on hold immediately by issuing a circulation with immediate effect until the situation normalises.

Higher testing should be ensured among them. Provision of quarantine, regular medical checks at shelters and homeless hotspots are crucial. It is needed to address livelihood restoration, financial assistance along with facilitating nutritious meals which must be inclusive for children, elderly, women and disabled who are homeless.

The authorities should undertake the rapid mapping of homeless concentrations in all cities at the earliest.  Higher allocation of resources under the DAY-NULM will help create more shelters.  However, it is equally important to adequately utilise the funds already devoted to creating infrastructure under this scheme. Also, day and night and permanent shelters should be built in accordance with the norms laid out by the Supreme Court- one shelter with space for 100 persons.

There should be close monitoring of shelters through joint monitoring groups representing state advisor’s office, civil society organisations, state departments, homeless representatives and others. The right mechanism to train the responsible departments and implementing partners at the state level with refreshers are utmost important. Further, the government should take lessons from health disasters such as Covid-19 or other man made or natural disasters like mass displacement, accidents or even earthquakes and thus include homelessness in ‘disaster management practices’ and device actions plans for them, which will only be possible if the state undertakes smart planning and judicious spending of funds.

Baikunth Roy is a PhD in Economics from JNU, New Delhi and Vidya Yadav is a PhD from IIPS, Mumbai. At present, they are Assistant Professors at Patliputra University, Bihar.