In Himachal Pradesh's Kasauli, It’s a Fight between Technology and Tradition

While the BJP is relying heavily on tech to fight against anti-incumbency sentiment, the Congress is hoping 'Raja' Virbhadra Singh’s charisma will see it through. 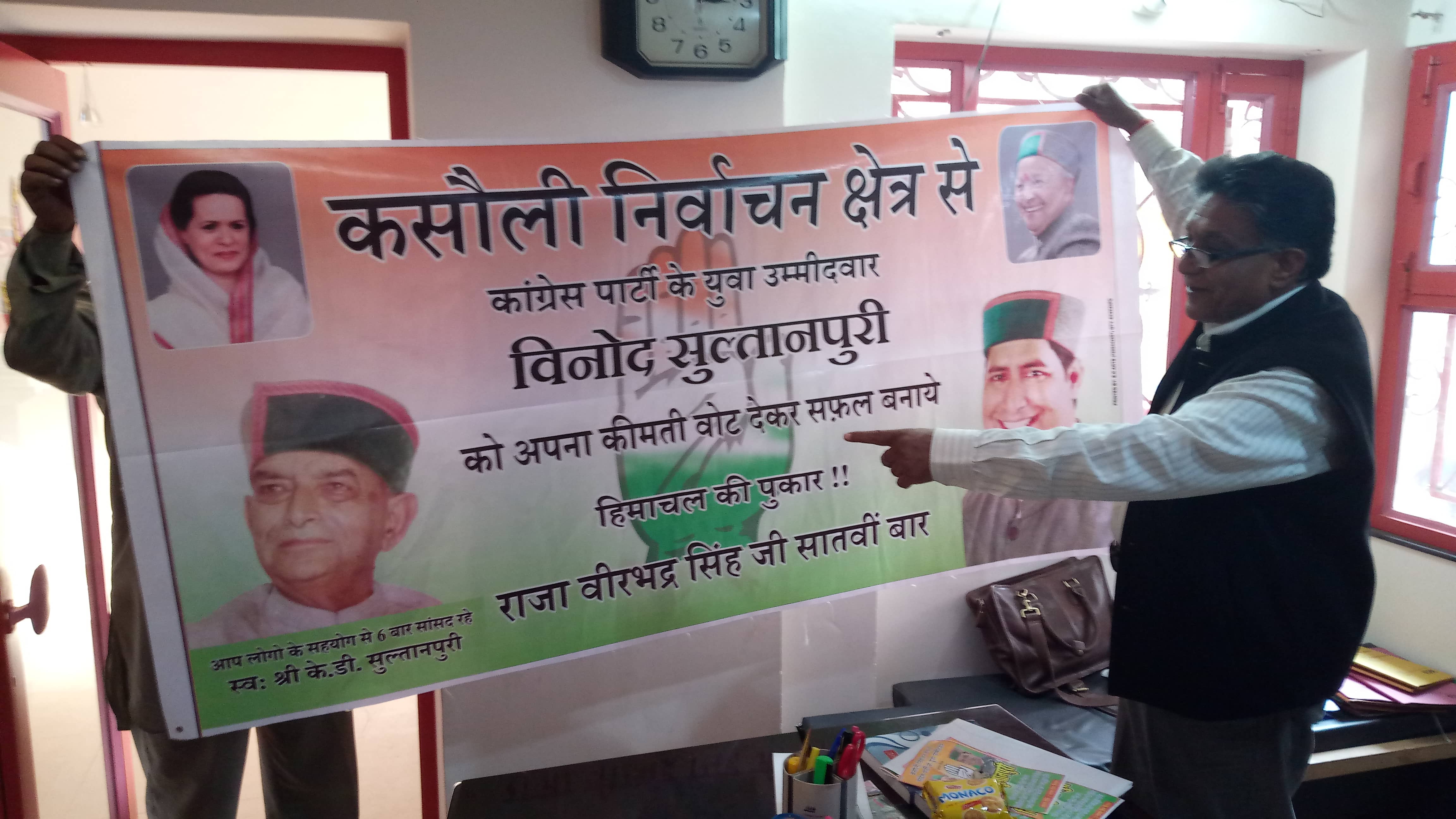 Kasauli: The Bharatiya Janata Party (BJP) and the Congress are fighting two very different battles in the Kasauli assembly constituency.

In 2012, in the last assembly elections, the saffron party’s Rajiv Sahjal barely edged out the Congress’s Vinod Sultanpuri by a slender margin of 24 votes. Sultanpuri and Sajhal will face off against each other yet again this time, with both parties leaving nothing to chance.

The close contest last time has led to chief minister Virbhadra Singh himself taking a keen interest in the campaigning. The BJP, on the other hand, has set up one of its six war rooms in the state here and is using technology to not only reach out to the masses but also to keep the anti-incumbency factor against its two-time MLA in check.

At Dharampura, situated on the national highway leading from Kalka to Shimla, the election offices of both parties are just a few metres apart. However, the manner in which the electoral battle is being fought from both is vastly different.

A computer centre owner, Rajender Singh, who has been associated with the BJP for over two decades is not only maintaining the candidate’s office but is also playing host to a team of computer experts who have set up a ‘war room’ at his institute a little distance away.

The war room, he said, is proving really beneficial as it keeps all the workers, be it of the party, yuva morcha (youth wing) or mahila morcha (women’s wing) on their toes. “There used to be problems of non-serious members being enlisted as workers or some of them not putting in the desired amount of work at the time of elections. Likewise, there used to be complaints of workers which went unheeded earlier. But all that has changed now,” he said.

At the computer centre, two women callers take regular updates from party workers about the number of houses they visited and cross-check with the voters. They also ask about the impact of the campaign and feed in all the data onto an Excel sheet which is also monitored at the BJP’s central office in Delhi. Workers that are found making false claims are reported.

This exercise has brought all the BJP’s local party units online and their performance is evaluated on a daily basis. It also ensures that even if the candidate is not campaigning in a particular block on a given day the other workers approach the voters. Updates taken from the workers form the basis for the corrective action which is also monitored by observers who have come from Haryana.

Exercise had worked for BJP in Lok Sabha, UP polls

Local political experts believe this exercise will pay off. One of them, who declined to be identified, said it had done exceedingly well in Kanpur rural area where the party had won four seats that it had not won before.

However, one of the war room experts that The Wire spoke to said that unlike the Lok Sabha elections or the UP assembly elections earlier this year, the action taken on the complaints of the workers or the non-performing workers has been slowe this time.

“But we have managed to create a great deal of data which can be used in the future. The exercise is also regularly updated. So when Dhumal’s name was announced we began asking our workers for their feedback on what people felt about the move and added a section to our worksheet to incorporate it.”

The war room is also being used to educate workers about ongoing programmes and schemes of the Centre about which the party wants them to speak to the voters. “So we also send them online literature which is in easy-to-use form so that they may be able to communicate it easily.”

The BJP workers believe that they need technological support because there are a number of issues that are working against the party this time in the constituency. Not only is Sahjal facing anti-incumbency sentiment, there is also anger among the trading community over the implementation of the Goods and Services Tax regime. They also admit that local problems pertaining to roads and water may be acting against the party candidate.

But workers like Sushil Sharma, who is the Up-Pradhan (deputy village headman) of Dharampura panchayat believe the announcement of Prem Kumar Dhumal’s name as the chief ministerial candidate by party president Amit Shah recently would “provide some relief”. He also notes that there is also anger against the Congress government as health services have deteriorated in the absence of adequate doctors and unemployment allowance announced by the Singh regime has not reached most of the youth.

As part of their campaign BJP workers are also telling the voters that some of the central schemes like Digital India, under which the enrolments were much higher in Uttar Pradesh and Bihar, did not take off in the state as the Virbhadra Singh government blocked it. The party is also raising the issue of Kotkhai rape case, in which members of the Special Investigation Team have been arrested for the killing of the main accused, and the state government blocking the development of a local college in its campaign.

Congress sees a negative vote against the saffron party

The Congress is, however, confident of putting up a good show and winning the election this time.  Its candidate, Vinod Sultanpuri, is the son of six-time party MP K.D. Sultanpuri. Though he has lost last time by a small margin, his election in-charge and former Himachal Pradesh Congress Committee treasurer Naresh Kumar Gupta is hopeful of his sailing through this time.

“There are several reasons for that. The compensation for the widening of the national highway in Dharampura was not paid by National Highways Authority of India to several families who did not possess proper documents and they are angry with the BJP. He said even the Sanatan Dharam Sabha building, which was constructed in 1932, was demolished but no compensation paid for it as it did not figure in the land records. Likewise, GST has impacted about 20% of the population and they are likely to vote against the BJP, he added.

As for people’s anger against the Kotkhai incident, he claimed that it was a more localised phenomenon and the anger due to it was unlikely to impact electoral fortunes in Kasauli.

Gupta said while the Congress is relying on the traditional styles of campaigning like door-to-door visits, corner meetings and big rallies, the chief minister was the only big face who has come to the constituency so far. “The problem is also that barring Rahul Gandhi we have few leaders of stature who may appeal to the masses here,” he quipped.

As for the use of technology to evaluate performance, Gupta said sadly there was not much support for it. However, noting that workers were using the social media sites to reach out, he exuded confidence that the Congress, which has won 7 of the 11 assembly elections in the constituency since 1972, would win another won this time.