The cost of the decade old Gangajal project funded by the Japan International Co-operation Agency to bring 140 cusecs of Ganga water to Agra, has escalated from Rs. 355.68 crores to Rs. 2888.88 crores, with no visible output on ground. 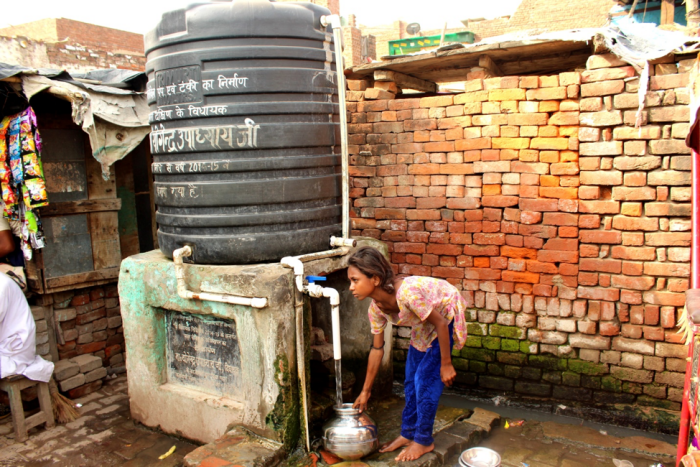 A girl from Jeevani Mandi basti filling water from the nearby submersible pump. Credit: Author

Agra: “For the past two years we are buying RO water bottles for drinking purpose as the water from the taps is yellow in colour and sometimes even stinks,” said Asha (50), resident of Jeevani Mandi basti where Ganga water in the adjacent Jeevani Mandi water works was promised by the central government a decade ago.

The state water supply is so polluted that not a single household in the city can use it for drinking. Most have installed submersible pumps to draw ground water, or they buy RO bottles on a daily basis. Many in the city, who can’t afford the tankers/RO bottles/pumps, are forced to drink the polluted water.

“Even using a submersible pump is not reliable as it stops functioning in case of an electricity cut, which is quite frequent in Agra,” said a resident of Bagh Muzzafar Khan area.

“The total water demand of the city is approximately 400 million litres per day (MLD) and the current water supply is 285 MLD supplied from Sikandra water works (120 MLD) and Jeevani Mandi water works (165 MLD). Water supplied to Agra is not adequate but after the completion of Gangajal project the supply-demand gap will end,” Chandan Singh, general manager, Agra Jal Sansthan told The Wire. 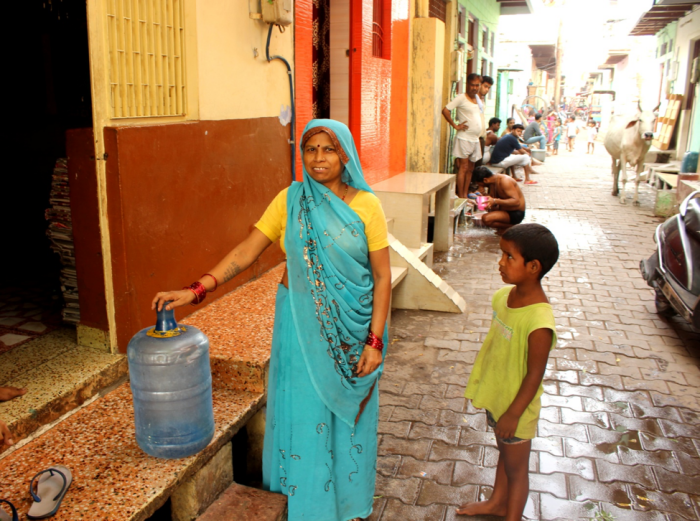 Asha shows the RO bottle that she buys from the nearby private water plant everyday. Credit: Author

Approximately one thousand cusecs of water is discharged from Gukul barrage to Yamuna, which is not enough enough to meet the city’s water needs. Between 1994 and 2012, the Uttar Pradesh government spent Rs 2,052 crore to clean the Yamuna.

In a meeting chaired by the Union cabinet secretary on March 14, 2005, it was decided that 150 cusecs (approximately 368 MLD) of raw water would be transported from Palra head works (in Bulandshahar district) of upper Ganga canal, to Mathura, and 140 cusecs onward from there to the two water works in Agra, through a 130 km long closed conduit of 2500/2200 mm pre-stressed concrete pipe. The cost of this was estimated at Rs 355.68 crore, and the government signed an agreement with Japan Bank of International Cooperation (JBIC) on December 2, 2005 for this.

In last 12 years, the cost of the project has shot up to Rs 2887.92 crore, and there is still no visible work on the ground. Sources say only 40 km of the pipeline has been laid so far. 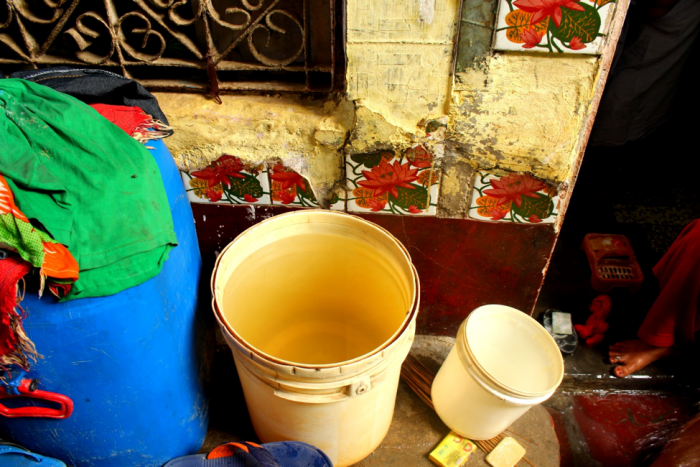 Yellow coloured water from the taps in Agra. Credit: Author

Speaking to The Wire, Piyush Pankaj, general manager, Gangajal project said, “We cannot start the project before financial clearance. The loan amount was signed in 2014. The cost has increased because the scope of the work has changed. The pipeline length has changed from 70 km to 13o km. Two pipes with improved quality will be laid from Palra to Mathura instead of one.”

When asked the reason for so much delay in the project, Pankaj said that temporary acquisition by laying three metres of pipe underground in the farms had been sought, but the farmers, who were demanding land acquisition rates, have got a stay order from the court, due to which the project is getting delayed.

“India’s first Moving Bed Bio-Reactor (MBBR) technology-based water plant was set up in Agra’s Sikandra Institutional Area to supply clean water to the city. However, it is still in need of major maintenance,” said Anil Sharma, who is associated with Agra’s civil society.

“Both quality and quantity of water in Agra is a problem. The underground aquifers and the water table will rise only when the river is be desilted and dredged on a massive scale,” added Sharma. 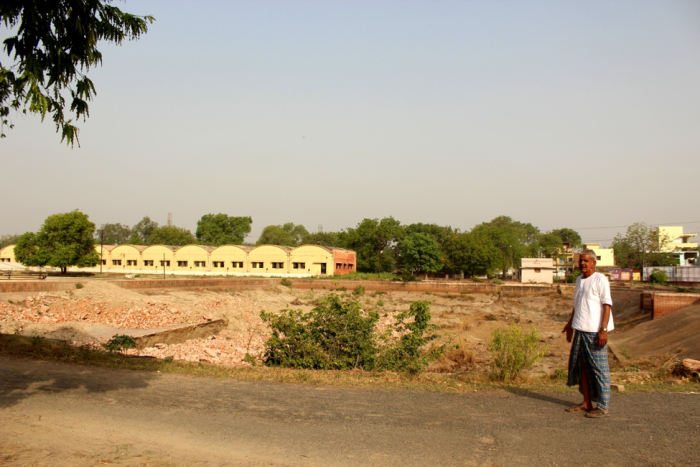 Puran Singh, a retired worker points at the allocated land at the Jeevani Mandi water works, where Ganga water is supposed to be stored. Credit: Author

“The level of corruption in the state is so high that even the diesel provided to run the sewage treatment plants is sold for money,” Raja Mahendra Aridaman Singh, a member of the legislative assembly from the Bhartiya Janta Party from Bah constituency, and an initiator of the Gangajal project told The Wire.

“The water crisis in the city will escalate in the coming years as the local water systems are still not prevented from contamination and exponential increase in the usage of submersible pumps is declining the ground water at the rate of two metres each year. No steps have been taken to recharge ground water and the monsoon water is still not managed,” Rajeev Saxena, veteran media activist and former president of the Taj press club told The Wire. 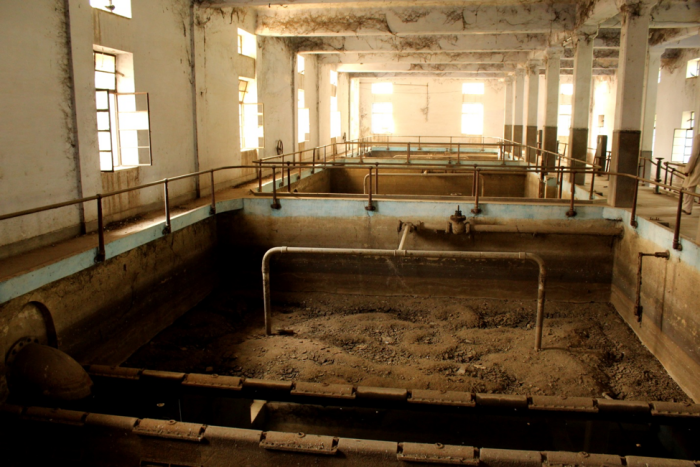 The authorities are not on the same page over the water issue in Agra. Some are in favour of releasing Ganga water in the Yamuna, while others want to channelise water from the Chambal river. “Water if channelised from Chambal to Agra, will be more cost effective as it is much closer,” Raman, a member of the Supreme Court Monitoring Committee told The Wire.

Saxena however said, “Water in Chambal is not enough to meet Agra’s demand even if it is close. We need to think on a long term basis.” 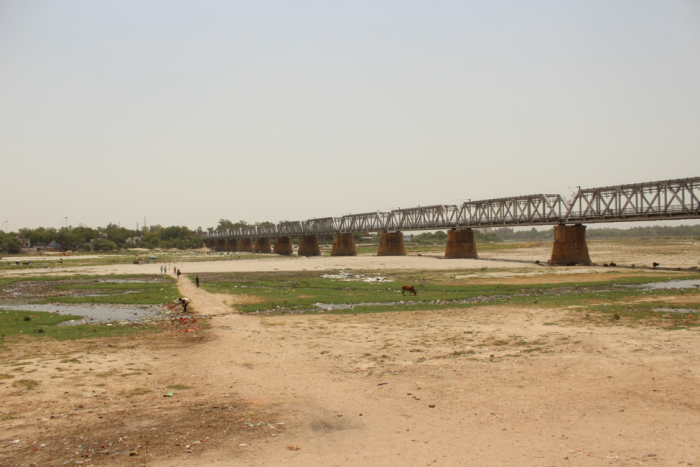 Pollution in the Yamuna at the Hathi Ghat in Agra. Credit: Author

The shrinking water level of the Yamuna is a threat to the foundation of the Taj Mahal which is made of ebony wood and needs the constant flow of water to remain firm and durable. Without that, ebony wood shrinks, and this could cause cracks in the main building and tilt the minarets. 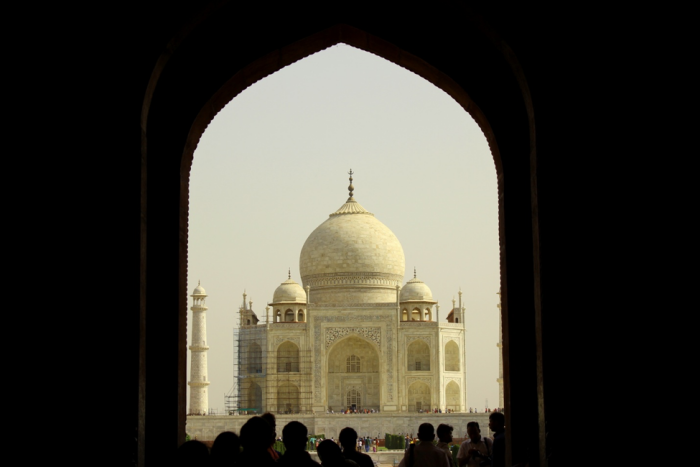 The Taj Mahal, from the north gate entrance. Credit: Author

The eco-sensitive Taj Trapezium Zone (TTZ), encompassing an area of 10,400 square kilometers, spreads across six districts – Agra, Mathura, Firozabad, Hatras, Etah and Bharatpur. Despite billions of rupees invested in infrastructural development and water supply projects in the TTZ, the districts are still facing an acute shortage of power and water, and there has been no improvement in the quality of the water supply.