If a former policeman's claim that the two men were killed is true, it will make solving several high-profile cases to which they are linked, including the Samjhauta Express blast, much harder. 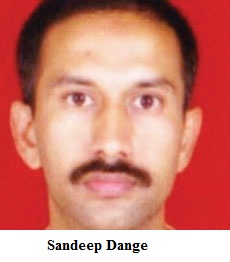 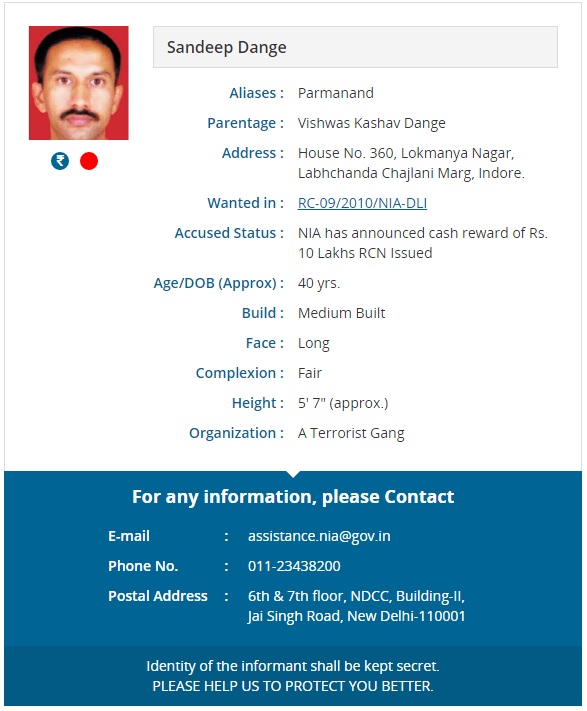 The wanted poster for Dange, announcing the award. Courtesy: NIA

Bhopal: Investigations in at least four major terror cases with right-wing links might suffer a big blow if the claims of a Maharashtra police inspector turn out to be true.

Former ATS member M. Mujawar, in an affidavit, has made the shocking claim that two most wanted terror suspects, Sandeep Dange and Ramji Kalsangra, both from Madhya Pradesh, were killed in a Maharashtra ATS ‘encounter’ eight years ago, on November 26, 2008.

Dange, who carries a Rs 20 lakh reward for his arrest, is said to be a key man in the right-wing terror network. An engineering graduate hailing from Indore, he is accused of planting IEDs on the Samjhauta Express, and is also the main accused in the blasts at Ajmer Dargah, Malegaon and Mecca Masjid, Hyderabad.

Dange and his accomplice Kalsangra, an electrician, have been missing for a long time, thereby affecting the prosecution’s cases in the Malegaon blast, Ajmer blast, Mecca Masjid blast and Samjhauta Express attack.

If they are indeed dead, this would have serious impact on all these cases in which many high-profile individuals are accused, including Swami Aseemanand, Pragya Thakur, Dayanand Pandey and Shrikant Purohit.

Following Mujawar’s claims, who filed an application in this regard in a Maharashtra court, Dange and Kalsangra’s MP-based kin sought a high-level inquiry. Consequently, the National Investigation Agency (NIA) has initiated an inquiry to verify the claims.

Dange, 45, and Kalsangra have been on the run for years. The two have been on the CBI and NIA’s most-wanted list for a long while. The NIA advertised a Rs 10 lakh reward for Dange’s arrest. Kalsangra’s arrest also carries a Rs 10 lakh reward. The CBI, who probed the Mecca Masjid blast case, initially placed a similar reward (Rs 10 lakh each) on their capture. The ATS and other agencies were also on the hunt.

The chargesheets in right-wing terror cases reveal that Dange and Kalsangra were a part of Sunil Joshi’s group. Joshi, an accused in the Samjhauta Express case and two other such cases, was a key person in the network.

After Joshi was killed (suspected to have been murdered by his own men), the onus on the agencies was to nab the men he worked with, specifically Dange and Kalsangra. The trial is on in the cases, but with the duo absconding, the cases against the accused have weakened over the years. Some of the accused have got bail. In addition, witnesses are now turning hostile.

Another case, the Modasa blast in Gujarat, which too was taken over by the NIA, was closed in 2015 as Dange and Kalsangra were never arrested.

Police officials in Madhya Pradesh would privately say that while Kalsangra was once seen in Indore, Dange was never spotted after his name came up in connection with the blasts.

Those who had investigated the Samjhauta Express blast, in which 68 people, a majority of them Pakistani citizens, were killed, had found that the suitcases in which IEDs were planted had covers with Apolo 600 written on them and were purchased from Kothari market in Indore.

The Samjhauta case chargesheet mentions that Swami Aseemanand was angered by the terror attacks on temples like Akhsardham, Raghunath Mandir and Sankat Mochan temple, and decided to give a ‘befitting’ reply. 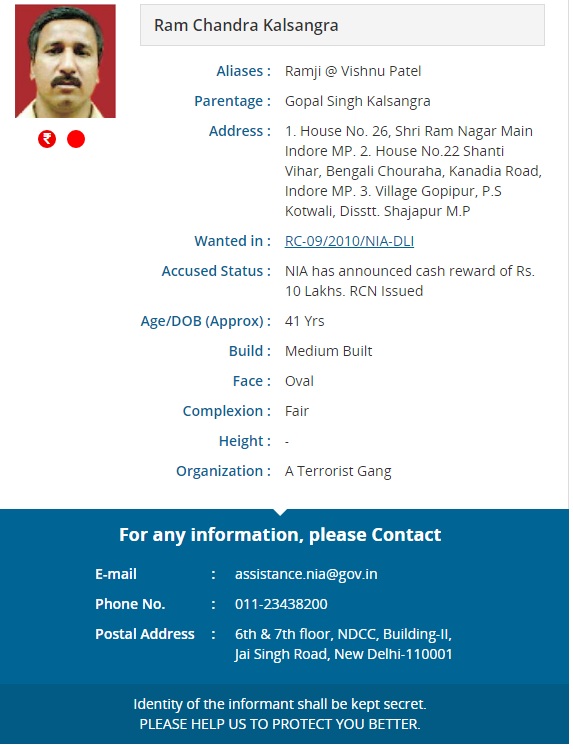 The wanted poster for Kalsangra, announcing the award. Courtesy: NIA

Joshi had allegedly offered his services and said that he had boys who could execute the plan. The chargesheet mentions the purported conversation and Dange’s involvement in planting the IEDs.

With Joshi dead, investigators were clueless about ‘his boys’ and were aware of just Dange and Kalsangra’s role. Maharashtra police inspector Mujawar, who was suspended in an Arms Act case, has filed affidavit claiming that the two were killed in an encounter and were “wrongly shown as alive”.

“Shall I consider myself a widow?”

Subsequently, Dange and Kalsangra’s kin have demanded a probe into the claims. “Shall I consider myself a widow? At least my husband’s body should be brought before us,” said Kalsangra’s wife in a press conference in Indore.

Dange’s father, V.K. Dange, a retired professor, said that he has been under stress for years and the truth must come out about his son, about whether he is dead or alive.

Dilip Patidar, another suspect, was allegedly picked up by the Maharashtra ATS and had later died under mysterious circumstances. His family members have been claiming that he had been killed in custody.

Police officials in Madhya Pradesh refused to comment. “The tip about them was that Kalsangra and Dange were hiding in Nepal, though there was also input that they were in Dangs district in Gujarat but they couldn’t be arrested,” said an intelligence official, not wishing to be named.

“There have been rumours that they might have been eliminated but if they aren’t caught, it will be a big blow for these high-profile cases,” he added. For the last few years, it has been common for most people in the intelligence to say that Dange and Kalsangra escaped the country.

Dange’s and Kalsangra’s families have urged the Maharashtra government to initiate a high-level probe into the officer’s allegations.