Crime Has Gone Up in Bihar, But Not Because of the Liquor Ban

A comparison of data from 2010-2016 seem to indicate that the post-liquor ban period is not significantly different from previous years. 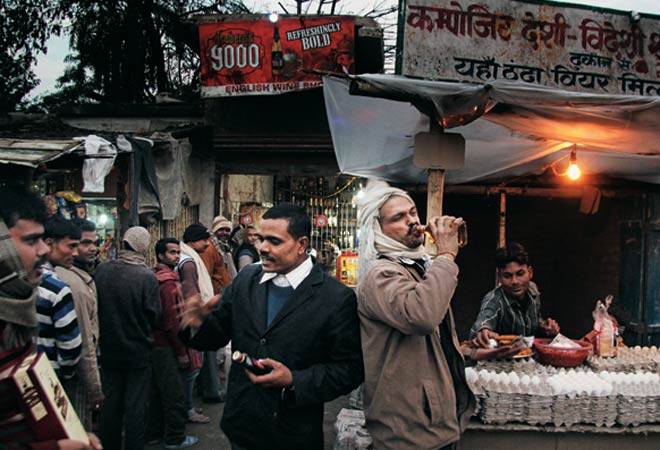 Outside a liquor store in Bihar, the way it as before the ban. Credit: Reuters

A few days ago, some newspapers, including The Wire, reported on how crime rates in Bihar had increased steadily after the state instituted a ban on alcohol. The surprising claim prompted a deeper look into Bihar’s crime rate.

The central claim of these articles cited the following graph, generated from figures obtained from the Bihar police. The author compared the total crime figure of 14,279 in April 2016 to 16,153 in October 2016 to arrive at a difference of around 13%, which was recorded as the increase in crime post the alcohol ban. 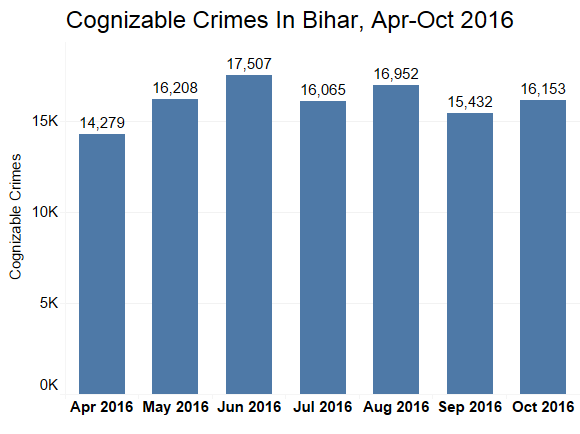 Before we put this shift down to the alcohol ban, we need to have a sense of what the crime figures for October 2016 would have been had the ban not been implemented. A rough and dirty method to get this sense is to look at how crime figures in Bihar behaved before the ban.

If the alcohol ban did indeed impact the crime rate, we would expect the crime figures for each month after April 2016 (when the alcohol ban came into effect) to be significantly higher than the figures for the corresponding months in 2013, 2014 and 2015. The following graph performs this comparison for us. The graph shows the total cognisable crimes committed in Bihar in each month of the year for the 2013-2016 period. 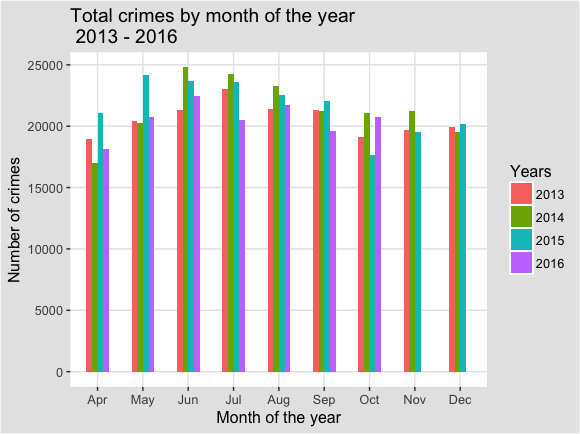 The above relationship is also seen in the case of major individual crimes in Bihar. The following graphs indicate the year-on-year month-wise comparison for thefts, riots, kidnapping and burglary, respectively. Only the trend for kidnapping shows a wide deviation from the 2013-2015 trends. 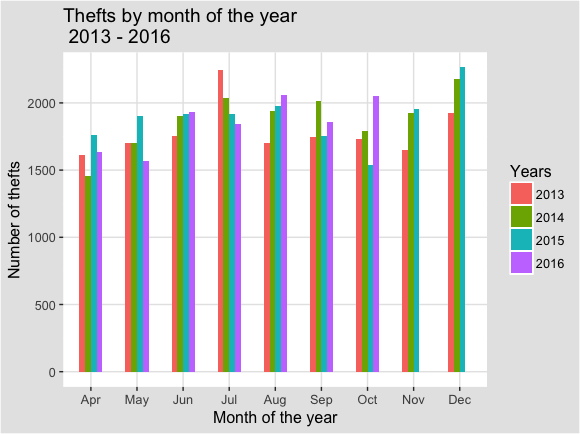 Thefts by month of the year. Credit: P.J. Paul 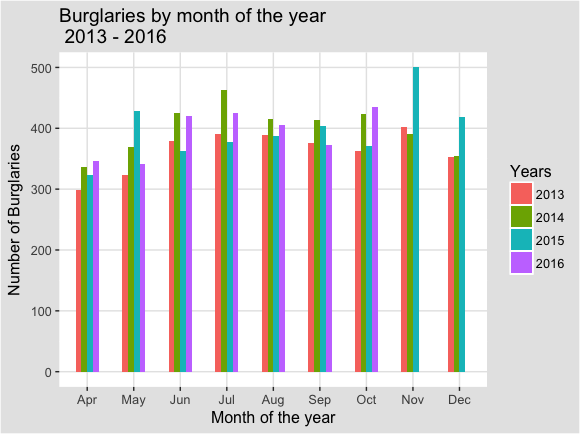 Burglaries by month of the year. Credit: P.J. Paul 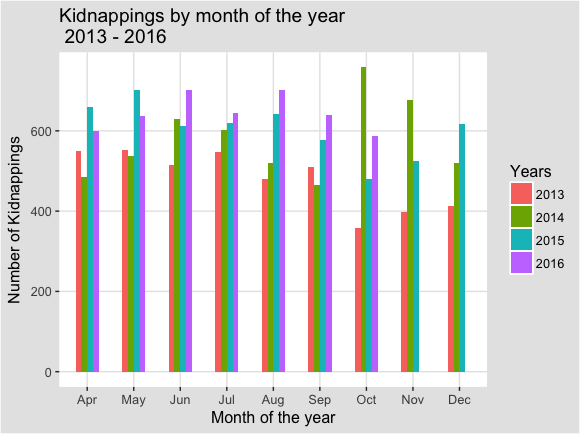 Kidnappings by month of the year. Credit: P.J. Paul 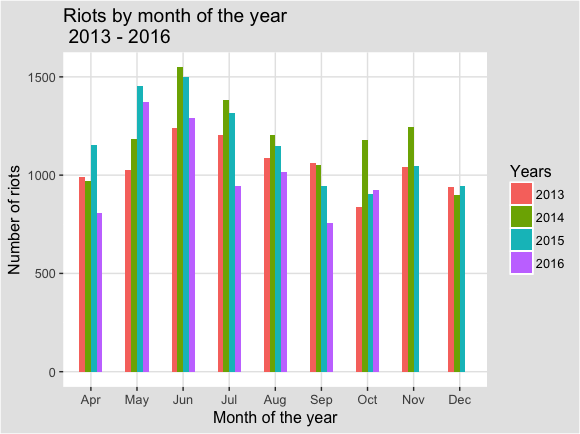 Riots by month of the year. Credit: P.J. Paul

All this seems to indicate that the post-April 2016 period is not significantly different from previous years and that the alcohol ban has not had a major impact on crimes.

A general reason for these results is the seasonality of crime in Bihar – meaning crime is generally higher in some months, lower in others. This is highlighted by the following graph, which shows the average crime figure for each month of the year for the 2010-2015 period. 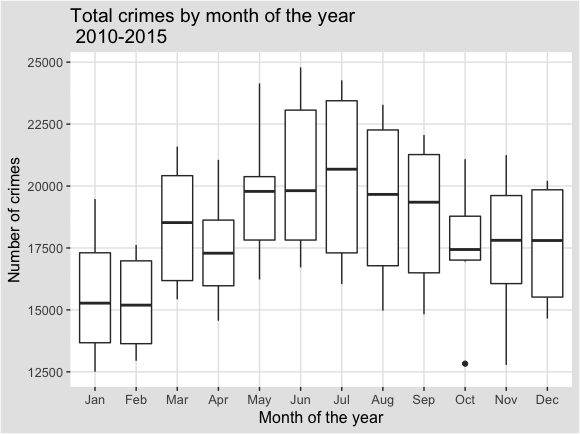 Total crimes by month of the year. Credit: P.J. Paul

The difference between months is clearly visible. A comparison of the crime figures in January or February against any other month will most likely lead us to conclude that crime has increased.

However, none of this means that all is well in Bihar. In fact, as the following figure indicates, the monthly crime figures for the period from 2013 to 2016 are consistently higher than the figures for 2010 to 2012. 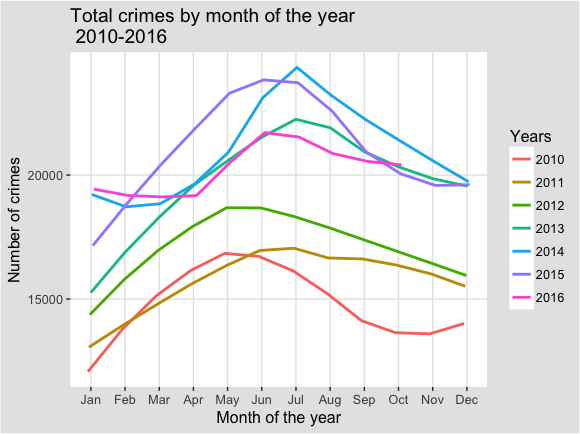 Total crimes by month of the year. Credit: P.J. Paul

While these figures are not adjusted for population figures (per-capita crime could be decreasing, even though absolute crime is increasing) as well as for the possible periodicity in crime (crime may rise and fall over cycles of three or so years), the persistent upward shift of crime figures deserves closer scrutiny.

P.J. Paul is an Associate at IDinsight, based in Vijayawada. Views expressed are his own.