Can Mandal Politics Look Beyond The Secular-Communal Binary? 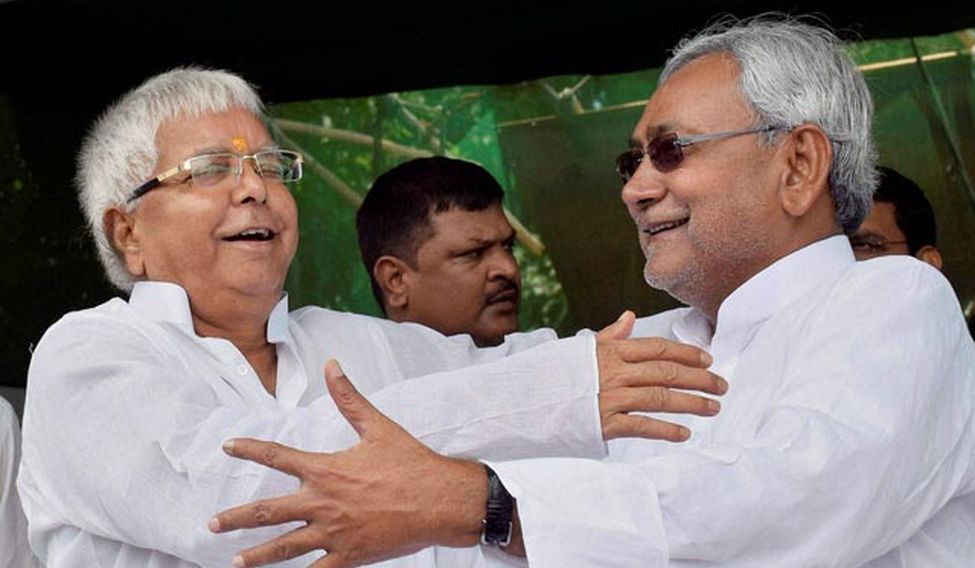 Lalu Yadav and Nitish Kumar after their impressive victory in the Bihar Assembly elections. (Photo: PTI)

A major daily has captured the recent electoral result in Bihar by the phrase ‘Mandal 2.0 trumps Kamandal 2.0’. In other words, the electoral battle between the NDA (BJP and its allies) and the Grand Alliance (JDU-RJD-Congress) has been posited as the most recent edition of the contest between majoritarian communalism and caste-based social justice which was witnessed during the early 1990s.

But while the mood in the Grand Alliance is celebratory since its historic victory I would like to play the devil’s advocate here and point at the two key issues which Mandal 2.0 must address if it is to fulfil any democratic promise whatsoever.

Though Mandal politics in Bihar has been effective symbolically in challenging the hegemony of the privileged castes and restricting communal violence, it has understandably been led so far by the relatively socially/numerically dominant sections within the subordinated communities. The recent emergence of new political subjectivities within the Dalits, backward classes and religious minorities like the mahadailt, atipichda and pasmanda capture the exclusionary dimension of Mandal politics quite succinctly. A category-wise break up in the recent electoral results reveal that Upper Castes have secured 20%, Backward Castes 46%, Scheduled Castes 15.6%, Scheduled Tribes 0.8% and Muslims 10% seats respectively. It is clear that among BCs castes like yadav, kurmi, koeri and baniya have bagged a disproportionate number of seats; however, the figures for EBCs have not been forthcoming.

The explanation for this is that in Bihar the OBC list is internally differentiated into Extremely Backward Classes (EBC, Annexure I) and Backward Classes (BC, Annexure II) with most Muslim subordinated castes, now politically labelled as pasmanda, being included in the former along with Hindu EBCs. So unless one breaks the data for Muslims in caste terms it is not possible to arrive at a figure for EBCs. And this is precisely what most experts have hesitated in attempting. In most reports and surveys Muslims have been treated as a monolithic bloc and the internal power differentials have been repressed.

Though Muslims constitute about 16.5% of Bihar’s population, their representation in this election turns out to be 10%. Apparently, this reflects under representation of the group as such, but once we disaggregate the data in caste terms the results are revealing. My own calculation, based on information shared by political workers from Bihar, suggests that out of the 24 successful Muslim candidates there are 18 UCs, 1 EBC and 5 BCs. In the absence of caste census data one may roughly suggest that 20% of Muslims in Bihar are higher castes whereas 80% are backward castes (Dalit muslims are included in the BC/EBC list as due to Presidential Order (Clause 3), 1950 the Dalits belonging to Islamic and Christian faiths are excluded from the SC list). That means higher caste Muslims constitute about 3.3% whereas backward caste Muslims constitute about 13% of Bihar’s population. Following this we find the representation to be 7.4% for higher caste Muslims (18/243) and 2.6% for backward caste Muslims (6/243).

These figures clearly reveal that while the higher castes within Muslims are represented more than double their population share, it is the backward caste Muslims who are grossly under represented. Also, while in the State BC/EBC lists about 43 Muslim castes are recognized, only two castes (mukeri and kulhaiya) have entered the Assembly this year. Once the disaggregated data for Muslims in caste terms is available it is easy to indicate the figures for EBCs as well. As per my calculation the representation of EBCs could be between 8-9% which is clearly on the lower side. I believe that a disaggregated data for SCs will also show a similar trend.

If Mandal 2.0 has to be a robust democratic project then the political pariahs like the mahadalits, atipichda and pasmanda (and especially women) need to be integrated. So far the champions of social justice have demonstrated a shaky record on this count. Moreover, while broadbasing itself in terms of integration of excluded communities, Mandal 2.0 will also do well to reactivate the Lohiaite impulse of governance, cultural-social and systemic reforms.

Historically speaking, the terms of most contemporary debates on Indian politics were set up during the colonial era where the higher caste natives across religious groups played the role of key interlocutors. One of the dominant discursive moves was the setting up of the opposition between secular nationalism and religious nationalism (mainly Hindu and Muslim). In popular imagination this is framed as the battle between ‘secularism’ and ‘communalism’ with the former having a positive valuation in contrast to the latter. I would contend that contemporary empirical reality has foregrounded the politics arranged around the secular-communal binary (symbolised at the national level by the Congress and BJP) as a major impediment for the flourishing of political agency of the most deprived communities.

Let me elaborate the argument further by quoting from Dr. B. R. Ambedkar’s seminal essay The Annihilation of Caste: ‘A caste has no feeling that it is affiliated to other castes, except when there is a Hindu-Muslim riot. On all other occasions each caste endeavours to segregate itself and to distinguish itself from other castes.’ Following this one may logically conceive the riot (or ‘institutionalized riot systems’ to use Paul Brass’s term) as a key instrument in ironing out the internal caste contradictions within the Hindu body politic and stabilizing the hegemony of the dominant castes. However, what Dr. Ambedkar says in the context of Hindu society is also complemented by the pasmanda critique of communalism.

As Ali Anwar, pasmanda ideologue and MP (Rajya Sabha), says: ‘We see that the politics of communalism, fuelled by both Hindu and Muslim elites, is aimed at dividing us, making us fight among ourselves, so that the elites continue to rule over us as they have been doing for centuries. This is why we […] have been seeking to steer our people from emotional politics to politics centred on issues of survival and daily existence and social justice, and for this we have been working with non-Muslim Dalit and Backward Caste movements and groups to struggle jointly for our rights and to oppose the politics of communalism fuelled by Hindu and Muslim upper caste elites’. Obviously, while the differential in power between Hindu and Muslim communalism is quite apparent what the pasmanda discourse has brought out forcefully is firstly, the casteist motivations and the symbiotic nature of putative contending communalisms, and, secondly, the need to forge a horizontal solidarity of subordinated castes across religions in order to contest it.

If communalism is framed as a key instrument to perpetuate the power of privileged caste groups then can secularism be conceived as an adequate response to it? One may answer this question in the negative for two reasons. One, the Indian brand of secularism defined as pluralism and tolerance—that is, symmetrical treatment of all religions—naturalises and reifies religious identities and stalls internal reform, especially for the religious minorities. Two, secular scholarship and activism has been historically inhabited by the liberal-left elite belonging to the hegemonic caste groups across religions and has been responsible, whether by default or design, for repressing the question of caste. Not surprisingly on the question of caste the forces of secular nationalism and religious nationalism have historically found an interesting congruence. Following this one may argue that communalism cannot be adequately contested by the dominant project of secular nationalism but rather through a counter-hegemonic, anti-caste project of social justice as articulated variously by the likes of Jotiba Phule, Periyar EV Ramasamy, Dr. B. R. Ambedkar, Dr. Rammanohar Lohia and Abdul Qaiyum Ansari.

The recent affair of Laloo Yadav and Nitish Kumar with the Congress, a party that excels in managing Indian politics within the secular-communal binary (as exemplified by their role in the Ramjanambhumi-Babri Masjid episode, Shahbano controversy, minority sub-quota and the recent controversy around Tipu Sultan), must therefore be a cause of concern for the Bahujan bloc in the long run. This election was probably the first time in India that the RSS was revealed primarily as a Brahmanical organization than a communal one. There is an opportunity for Laloo-Nitish combine to build on this momentum and start contemplating political alliances beyond the Congress and BJP axis. However, with a history of pragmatist politics behind them, will they be able to reinvent themselves by broadbasing social justice politics and thinking of a political future beyond the secular-communal binary? I am not really sure.

Khalid Anis Ansari is Senior Assistant Professor in Glocal Law School in UP. His doctoral work at the University of Humanistic Studies (UvH), Utrecht (the Netherlands) is on caste movements within Muslims of Bihar.