Dealing with demonetisation aftereffects requires a fiscal and monetary boost, but the government appears to be in no mood to deliver it, for obvious reasons – the fiscal cushion that Narendra Modi's brainwave was supposed to provide never materialised. 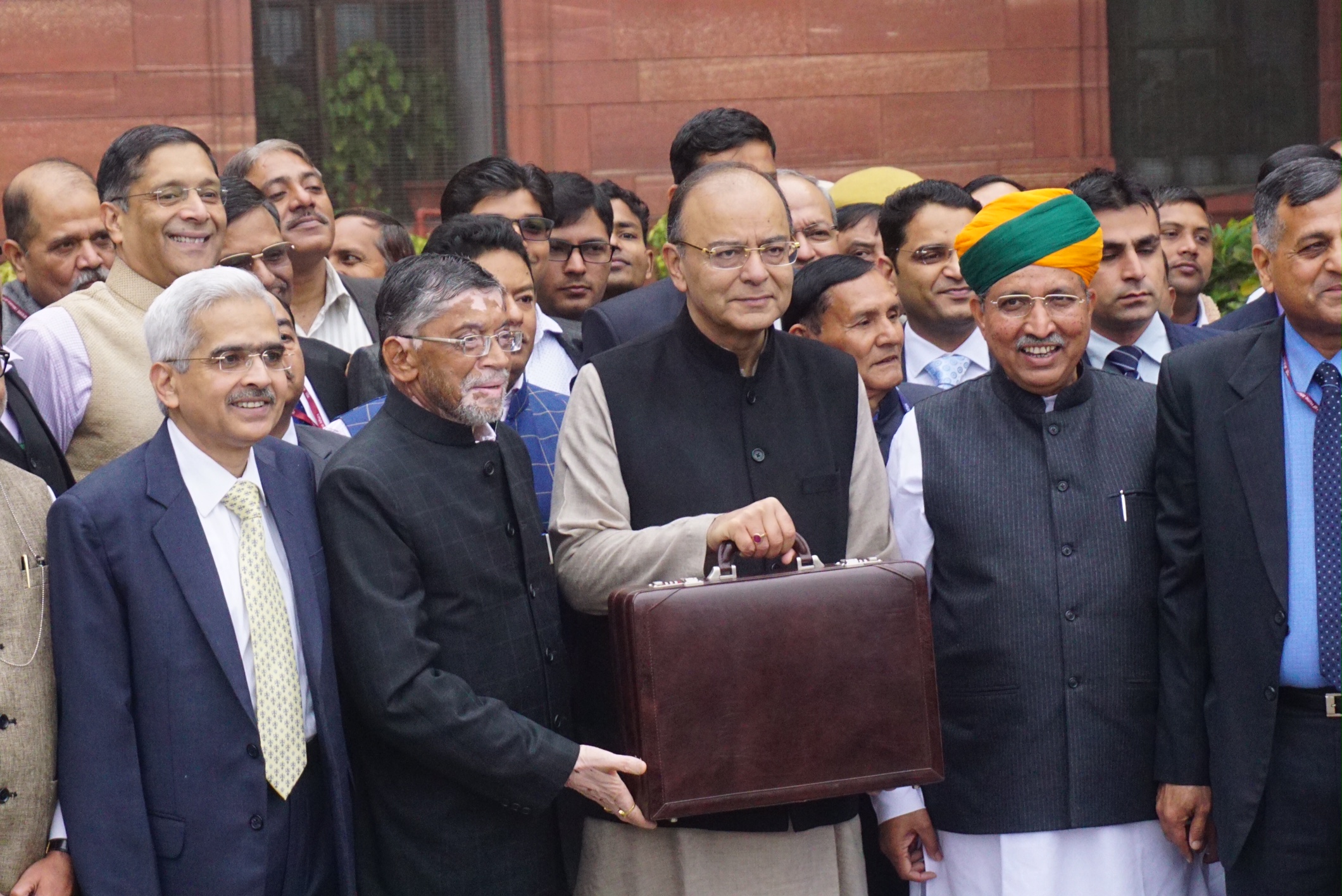 Finance minister Arun Jaitley ahead of the presentation of the Union Budget. Credit: Shome Basu/The Wire

So large does the ghost of the old bank notes loom over the Narendra Modi government even three months after their abrupt execution that finance minister Arun Jaitley’s latest Budget seems more an exercise in political exorcism than sound economic management.

The fundamental flaw in the Budget – as with the decision to demonetise in the first place – is the assumption that India’s abysmally low tax-to-GDP ratio is the product of excessive cash in the economy rather than the poor design, implementation and enforcement of tax policies. Yes, the use of cash helps individuals and companies engage in undocumented and unreported transactions. But neither demonetisation nor the restrictions on legitimate cash transactions will do anything to reduce either the use of cash or the size of the parallel economy. If anything, the arrival of the Rs 2000 banknote will make the logistics of unrecorded cash transactions even easier than they were in the past.

Just as Modi had done in his televised speech to the nation on December 31, Jaitley contrasted the fact that only 24 lakh tax payers have a declared annual income of Rs 10 lakh or over with the sale of 1.25 crore cars over the past five years. He also noted that in the aftermath of demonetisation, 1.48 lakh bank account holders made cash deposits of over Rs 8 lakh. The last bit of information would be subjected to data mining, he said, implying that this would help the government increase tax collections. But are these three data points really out of sync? Nothing has prevented the income tax authorities from digging into the tax records of the individuals who bought motor cars in order to identify discrepancies. If they have not done so yet, this speaks volumes for the efficiency of the IT department – and for the folly of relying on its “data mining” skills to enhance tax compliance. And if the analysis has already been done, Jaitley should tell us what was learned.

The finance minister’s reduction in the tax rate payable on the first slab of taxable income is a welcome measure that will offer some belated compensation to lower income tax payers who have been put through enormous inconvenience as a result of restrictions on cash withdrawals, but even if the hope is that this lower rate will encourage more individuals to start filing taxes, these new entrants will hardly make a difference to the tax-to-GDP ratio.

The single biggest missing element in the tax puzzle is agricultural income, which is exempt from income tax. Bringing agricultural income into the tax net – with a threshold set high enough to protect small and even medium farmers – would be a reform that would boost direct tax revenues but the BJP (like the Congress before it, not to speak of various regional parties) is wary of alienating wealthy rural interests by considering such a move.

Jaitley’s decision to cut the corporate tax rate for medium and small-scale enterprises (MSMEs) to 25% seems counter-intuitive from a fiscal revenue standpoint but his gamble is that these firms – which make up more than 90% of all tax-paying enterprises in India – will become more competitive and profitable. Not only might this generate supply-side effects on tax revenue but might also help create badly needed jobs. The push to help MSMEs is all the more relevant given the poor record of the largest corporates in increasing employment. But if the government is planning to continue with its restrictions on cash, the negative impact on the working capital of MSMEs will likely counter the positive effect of the tax cut.

Perhaps the most overtly political part of the Budget is the attempt by Jaitley to address the growing public concerns about the role of money power in politics. Until now, political parties have been allowed to accept cash donations of up to Rs 20,000 without the tax authorities asking any questions. For most big parties, anonymous cash donations have accounted for the lion’s share of political funding. Jaitley says the government has accepted the Election Commission’s recommendation that this sum be reduced to Rs 2000, which is welcome but so long as the veil of anonymity is not removed, this reform will be of little practical consequence. Just as large cash donations today are booked as hundreds of smaller donations that are shown as less than Rs 20,000, the same exercise will continue, except that parties will now claim thousands of even smaller donations. If they are not obliged to record the details of each donor, the potential for black money finding its way to their coffers remains.

Jaitley has also responded to the public perception that his government is harassing ordinary citizens in the name of fighting black money while allowing big defaulters to get away. He promised a new law to confiscate the assets of such individuals who have managed to escape Indian jurisdiction by fleeing abroad – a reference to Kingfisher boss Vijay Mallya. But the failure to seize the assets of such absconders and defaulters is the product of deficient political will and not stricter laws. Until now, public sector banks have watched silently as high net worth individuals and their companies have defaulted on loans running into tens of thousands of crores. The reason for this is that the defaulters tend to be politically influential.

Over the next two days, there will be plenty of analysis of the expenditure side of the Budget but early indications are that the big push the economy and the social sectors needed in order to counter the ill-effects of global headwinds and of demonetisation is not going to come. Dealing with the fallout of demonetisation – the slowdown, the layoffs, the gumming up of supply networks – requires a fiscal and monetary boost, but the government appears to be in no mood to deliver it. The reason for this is obvious. The fiscal cushion that Modi’s brainwave was supposed to provide never materialised. All that Jaitley had left in his armoury was political grandstanding – the promise that demonetisation will increase the tax base and tax revenues, and the claim that his party intends to clean up political financing. Both of these claims will be tested over the next year. Come Budget 2018, Jaitley needs to show that the number of taxpayers with annual income greater than Rs 10 lakh is appreciably greater than 24 lakh. If not, the political logic of his current Budget will stand completely exposed.