A Symbolic Bonfire of the Manusmriti on Women's Day

Objecting to sexist and casteist references in the text, students from different organisations join hands to consign print outs of Manusmriti to the fire 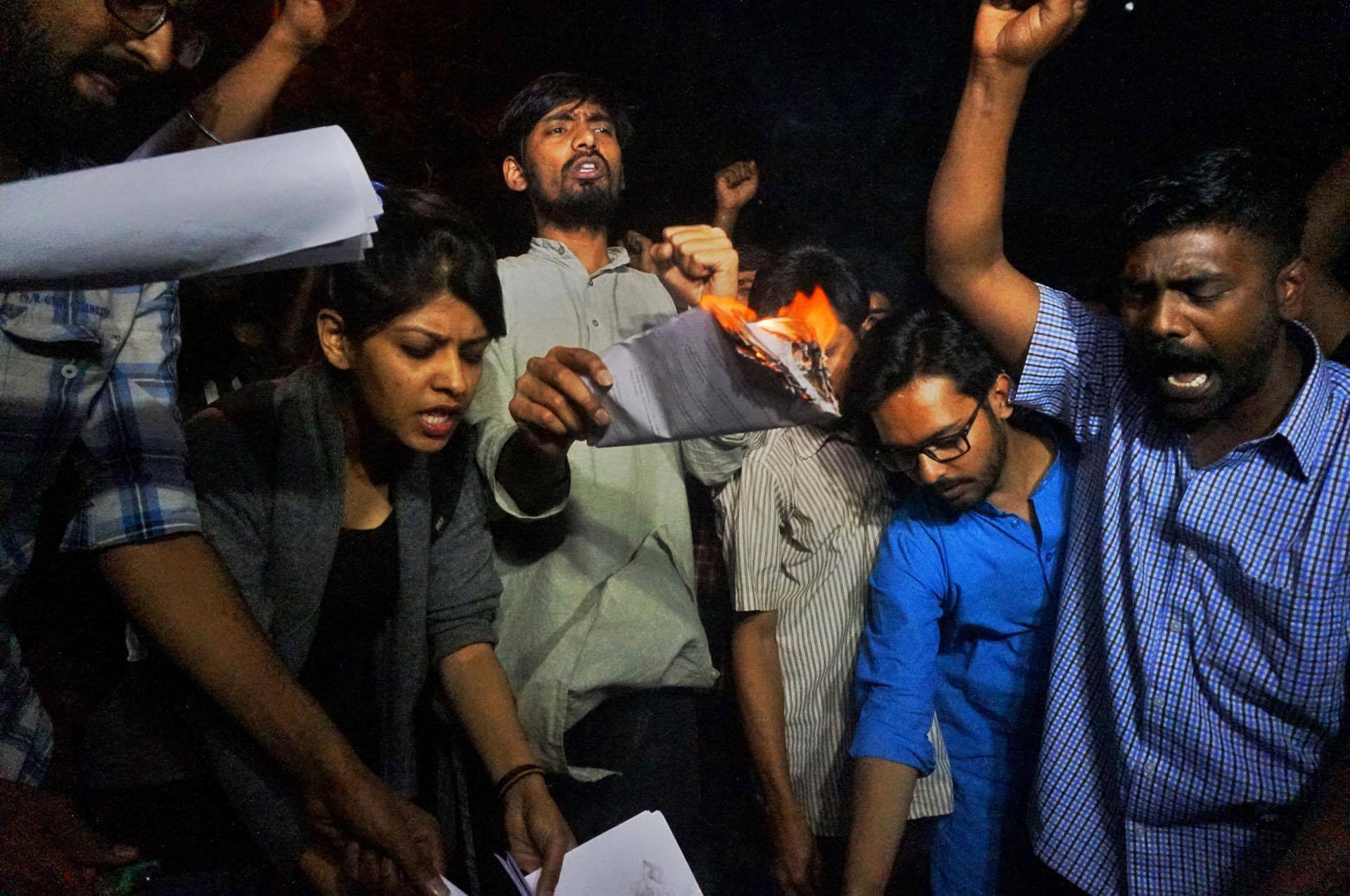 Students of JNU shouting slogans and burning copies of the Manusmriti Copies of the ancient text Mansmriti being burnt by students at JNU. Credit: Shome Basu

New Delhi: To celebrate International Women’s Day on March 8, a group of students of Jawaharlal Nehru University gathered at the Sabarmati lawns on campus and burnt printouts of the Manusmriti. Points from the text which were seen as particularly sexist and casteist were read out before the burning, accompanied by slogans of ‘Jai Bhim’ and ‘mahilaayen maange azadi’ (women demand freedom). Members of various student organisations including the All India Students’ Association, Democratic Students’ Federation and Birsa Ambedkar Phule Students’ Association were at the event, as well as the vice-president of the JNU branch of the BJP’s youth wing, the Akhil Bharti Vidyarthi Parishad (ABVP), Jatin Goraya.

University security tried to stop the event from taking place, claiming that all the necessary permissions had not been taken, but the event continued nonetheless. A security officer recorded the proceedings, but would not disclose why.

Upasana Vashishth, a student of Russian at JNU and an organiser of the event told The Wire that planning for this was going on for some months. “The Manusmriti describes half of the population simply as property. We thought women’s day would be an appropriate occasion to show our complete disagreement with it. This is just a symbolic gesture, but that is how a lot of movements start. Hopefully it will lead to some further action”.

Another organiser of the event was Pradeep Narwal, one of the ABVP members who quit the organisation in February. He had spoken to The Wire on his plans to burn the document and the disagreements this created within the organisation even then. Goraya, who was actively involved in this plan, said,“I don’t know where I will stand with the ABVP after this”. Pradeep (Narwal) and I have been asking them to condemn the Manusmriti for some time now, but there has been complete silence from them. Why won’t they speak out against this patriarchal and Brahmanical document?”

Some of the points read out from text included:

“Reading the Manusmriti really disgusted me”, added Chetna, a student of political science. “And the idea that there are people and organisations that still follow these principles is very worrying”.

When The Wire spoke to Saurabh Sharma, JNU students’ union joint secretary from ABVP, before the event, he said he had received no formal notice of it or one of their members planning to attend. “We have only seen some posts on Facebook that Jatin (Goraya) may be planning to burn the Manusmriti. At the moment, we neither support nor condemn this. We are a democratic organisation, we will need to have a discussion about it”, he added.