In an interview to The Wire, Arvind Panagariya called for strategic patience, and stressed that Import substitution and action to be taken against China in the interest of national security are separate. 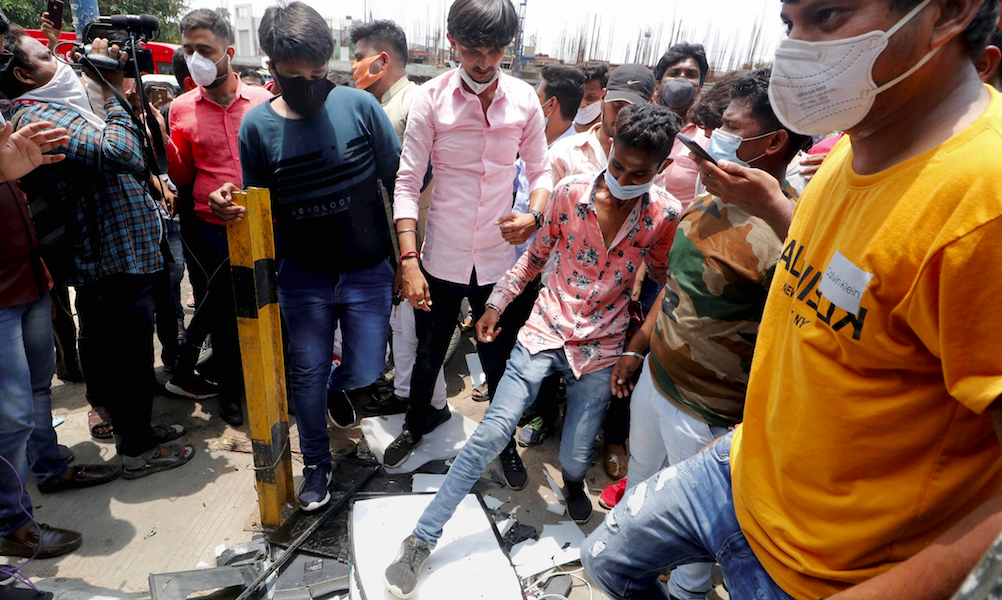 New Delhi: In an audio interview with The Wire, former Niti Aayog vice chairman Arvind Panagariya has said that a trade war with China could end up doing more harm to the Indian economy than to the Chinese economy.

Over the last few weeks, and particularly since the clash between Indian and Chinese armed forces in the Galwan Valley of Ladakh, which led to the deaths of 20 Indian soldiers, a chorus has grown in India to reduce its dependence on Chinese imports with the ultimate stated aim of hurting the Chinese economy. However, no such policy has so far been announced by the government of India, although issues over custom clearances have propped up.

Explaining that China’s exports to India are only 3% of their total exports, while these account for about 15% of India’s total imports, Panagariya, who is professor of economics at Columbia University with a focus on international trade policy said, “These are important imports for us. If we impose sanctions, that will impact our producers.”

Exploring this point further Panagariya said that in case India does impose sanctions or restrictions on Chinese imports, it will only be logical to assume that China will retaliate and impose restrictions on Indian exports.

“That will really hurt us. See, 6% of our total exports are going to china. So, proportionately, and particularly if you think of the differences in the size of the economy, then this will impact our exports more than our sanctions will impact China’s exports,” he said.

Also read: China and India Need a Way to Get Out of the Maze in Ladakh

Calls for a trade war with China have come at a particularly delicate time for the Indian economy and could end up setting India’s economic growth back several years, Panagariya argued.

“Even before COVID-19, our growth was only about 4.2% compared to 7% in previous years. We were slowly getting out of the slowdown when COVID[-19 pandemic] happened,” he said.

Panagariya contended that the shock to the economy due to COVID-19 and the lockdown is unprecedented. “Nothing like this has happened in the past and may not happen in the future.”

He said it will be particularly damaging to the economy to impose trade restrictions at this point in time. “If we impose another shock through trade now, then to bring the economy back to 7% and 7.5% growth I don’t think that will remain possible.”

Also read: What Would Boycotting Chinese Goods Mean for India?

Panagariya also argued that the current discourse around trade with China has mixed up two issues that should ideally be kept separate – ‘import substitution and action to be taken against China in the interest of national security’.

He said that import substitution as a strategy is not going to benefit any economy in the world in the best of times. “I challenge you to tell me one example of any country which has benefitted from increased protectionism. There is not a single one. It is illusionary to believe that import substitution will help any economy,” he said and went on to explain how India’s earlier trysts with protectionism resulted in low levels of growth.

“Our policy of import substitution led to a growth of only 3.7% and 3.8% between 1951 and 1981. Our population grew at around 2.3%. So, per capita income growth was only around 1.5%. My generation did not see any perceptible change in living standard in that period. So if import substitution was such a good policy why did this happen?” he asked rhetorically.

On the other hand, he said, if one were to look at the examples of countries which opened up for trade one would see a different picture. “Taiwan, South Korea, Hong Kong and Singapore all grew rapidly between 1960 and 1990 because all had open international trade policies. They are now far ahead of us. And we were at about the same level of per capita income in 1950,” Panagariya said.

“Then look at china since 1980. They have changed policies and opened up. So all fast growing economies have grown on the back of international trade,” he added.

One of the reasons for faster growth resulting from more open international trade, according to Panagariya, is that an open economy leads to better specialisation and advantages of economies of scale.

“So, you will have one city, for example, only producing one good. You are able to specialise and reap benefits of efficiency. You are also able to benefit from economies of scale,” he said.

“Trade benefits everyone. When you compete with others from around the world you learn from them. You work harder. Your productivity is better. Your efficiency is better. Smaller companies will also benefit from this. So the whole ecosystem will benefit from international trade,” Panagariya said.

On the other hand, cutting back on imports will also hurt a country’s exports. “Because that will lead to a decline in productivity so resources will be more expensive for local manufacturers. And you will become uncompetitive in exports also,” he said.

In the long and detailed interview he argued strongly against imposing any trade restrictions with China and suggested instead that India focus on strengthening its economy.

“We need to keep strategic patience with China because trade war can cause damage to India. See, we have to continuously deal with the threat from China because we have a very long common border. We have to live with these tensions. It is important for us to ensure that our economy is strong. We should focus on becoming a 10 trillion dollar economy. China is currently at 14 trillion dollars. If our economy is strong, China will be quiet at the borders,” Panagariya said.