What does the New NAFTA Mean for Asia and Asian Firms?

Will the United States-Mexico-Canada Agreement (USMCA) usher in a new era of global trade?

After a year-long bullying negotiation, the US was able to get Mexico and Canada to sign onto a replacement of the North America Free Trade Agreement (NAFTA) with a new one called the United States-Mexico-Canada Agreement (USMCA) in order, in the words of President Donald Trump, to provide a level playing field to American enterprises and labour.

Once ratified by the US Congress, this will be effective from 2020. More importantly it will potentially alter the global trade order.

It marks a significant milestone for the Trump administration as USMCA is expected to serve as a template for future trade negotiations of the US. As it is, the NAFTA was the biggest preferential trade agreement covering annual trade of $1.3 trillion. The new pact modifies key provisions of the 25-year-old NAFTA by placing new obligations in sectors such as automobiles, steel and on regulations such as on rules of origin, intellectual property rights, labour rights, environmental policies, state owned enterprises, exchange rate management, digital trade. It will be interesting to see whether the new deal leads to higher trade volume to benefit the US or not.

The second moot question is: has the USMCA taken into account the new and emerging realities of global trade? It is to be noted that it is the first re-negotiated trade agreement of the Trump administration. The US has used tremendous economic and political capital to do a deal that can secure American interests in external commercial relations.

This is one of the major reasons why it emphasised on the inclusion of provisions that go beyond trade, which are expected to exert pressure on other countries to take careful calls for new trade deals, particularly those with China. In that respect, one may say that the USMCA reflects a paradigm shift in the trade policy stance of the US with mercantile interest ruling the roost. Same was the case with Trans Pacific Partnership deal from which the Trump administration had pulled out. Features from that have also been pulled into the USMCA.

The USMCA has three important implications for the global trade order.

First, like TPP, it is expected to become a template for all future trade agreements of the US. This template will focus on rebalancing America’s trade relations with major trading partners, addressing the 21st century trade issues such as digital trade, investment facilitation, environmental and labour standards, unfair trade practices.

It is expected that the US will adhere to this template for its bilateral trade negotiations with its major partners in Asia and the Pacific.

Secondly, the Trump administration may use the USMCA as a guiding instrument for future multilateral trade negotiations at the WTO, particularly in areas such as digital trade, intellectual property rights and subsidies. It is evident from regular iteration on the part of the US that the current rules of the WTO are not equipped to deal with 21st century trade issues. Furthermore, it also has a strong view on its dispute settlement mechanism – dispute settlement body – that it is unable to deal with unfair trade practices, particularly that of China. Currently, the WTO DSB is facing a grim future because appointments to its appellate body have been held up by US intransigence.

It is evident from regular iteration on the part of the US that the current rules of the WTO are not equipped to deal with 21st century trade issues.

The enhanced emphasis on bilateralism is a part of a broader geo-economic strategy of the US as it is looking for a consensus among the old quad of WTO members – the European Union, Canada, Japan and the US – to place new rules at WTO. While the US is yet to place its proposal on reforming the WTO, the proposals put forward by the EU and Canada are to be looked at in this context. This (EU and Canada proposals) and the EU-Japan-US trilateral initiative to address China’s unfair advantages stemming from the operations of its state-owned enterprises can potentially lead to some convergence of ideas for reforming the WTO.

Thirdly, it is believed that its stringent rules of local content requirements will have a knock-on effect on global supply chains spread across the world. In case of the automobile sector, the potential gains from the USMCA will hinge on how provisions on steel and aluminium interact and influence the cost of production in this sector. This may have far reaching implications for many Asian countries including India, which are linked with automobile supply chains led by North American companies.

Furthermore, the USMCA stipulates new regulations of minimum wages and it is possible that the US may extend them to its non-FTA partner countries like India, which may have deleterious effects on their industries and the whole economy. 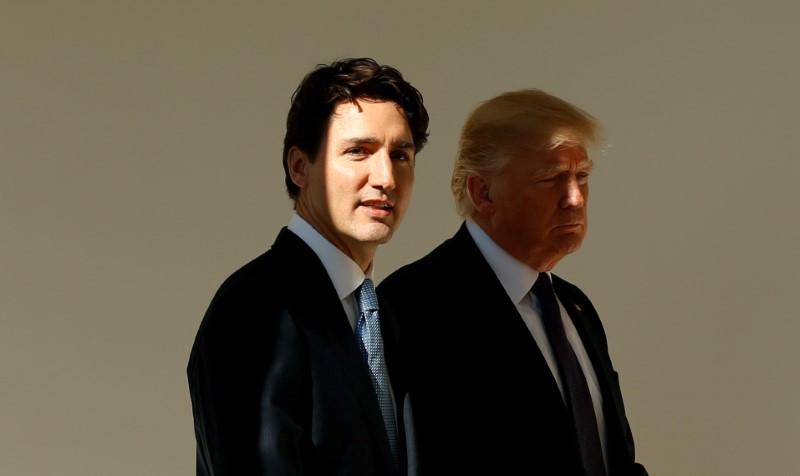 The US was able to get Canada and Mexico to agree to a new trade agreement. US President Donald Trump and Canadian Prime Minister Justin Trudeau. Credit: Reuters/Files

Thus, it is now clear that the US trade policy under the Trump administration has shifted from multilateralism to bilateralism as it believes that it can use its power to shape trade agreements to align with its own economic interests. There are clear indications that it will use its “hard power” to arrive at more favourable trade deals for advancing its domestic economic goals. How well this new geo-economic strategy of the US aligns with its geo-strategic objectives, particularly in the Indo-Pacific region, is a debatable question.

Therefore, it is important for countries like India to carefully study the structure and implications of not only the USMCA but also other bilateral trade deals that the US is expected to initiate in near future. Trump has already indicated the possibility of negotiating a trade deal with India. This is expected to be discussed at the forthcoming US-India Trade Policy Forum in New Delhi in early November.

Also Read: Trump’s Tariff Fixation Is Not the Solution for Flawed Trade Rules

Unless India agrees to negotiate such a deal, the Trump administration may withdraw the benefits of low tariffs that many Indian goods enjoy in the US under its Generalised System of Preference. In this context, at the announcement of the USMCA, Trump also said that India is the ‘tariff king’. Thus, we may also see the imposition of higher tariffs on India’s exports to the US and stricter regulations on H1B visa and such matters.

It is time for the Indian policy makers and trade negotiators to brace for a carefully calibrated trade deal with the US which can serve mercantilist interests of both and, at the same time, align with their geo-strategic interests in the Indo-Pacific region. We need the American market and the US needs us for both geo-economic and geo-strategic reasons.