"A lot of the Asian partners have become a place from where just Chinese goods are routed. We are going product by product to design various kinds of action, most of which will be on non-tariff lines," an official added. 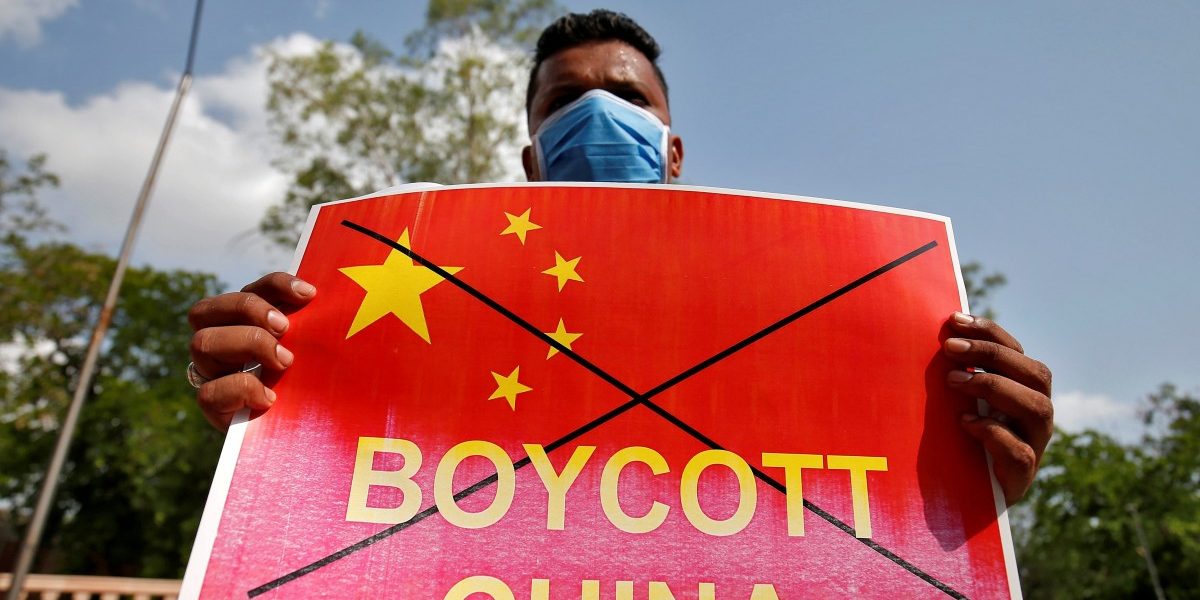 A member of National Students' Union of India holds a placard during a protest against China, in Ahmedabad on June 18, 2020. File Photo:Reuters/Amit Dave

India is planning to raise quality standards of imports, impose quantity restrictions, mandate stringent disclosure norms and initiate more frequent checks at ports of entry for goods coming from many Asian countries, the officials said, declining to be named as they were not authorised to talk to the media.

The moves will mainly target imports of base metals, electronic components for laptops and mobile phones, furniture, leather goods, toys, rubber, textiles, air conditioners and televisions, among other items, the officials said.

Last week, India’s trade ministry issued a notice to restrict inbound shipments of TVs by requiring importers to get a special licence.

The moves are expected to primarily hurt Malaysia, Thailand, Vietnam and Singapore – members of the Association of Southeast Asian Nations (ASEAN) with which India has a free trade agreement (FTA). India is also worried about heavy trade flows from South Korea.

“Raising duties has a limited impact,” said one of the officials. “Now we want to raise quality standards and also make sure that goods in FTA routes have roots in those countries. So customs would be more vigilant than before.”

India’s trade ministry did not immediately reply to an email seeking comment.

The government will also discuss raising the value-addition requirement for products imported from those countries from the current level of 20-40%, the official said, adding FTAs could be reviewed too.

“A lot of the Asian partners have become a place from where just Chinese goods are routed. We are going product by product to design various kinds of action, most of which will be on non-tariff lines,” the official added.

India has long had an uneasy relationship with China and a Himalayan border dispute escalated into the worst clash in decades in June. India said 20 of its soldiers were killed.

China is also India’s second-biggest trading partner, with trade worth $87 billion in the fiscal year ending March 2019, and a trade deficit of $53.57 billion in China’s favour, the widest India has with any country.

Thai and Malaysian authorities said they had not received any official communication on the issues of raising non-tariff barriers or re-routing of goods.

Thailand’s trade ministry said in a statement to Reuters that the ASEAN treaty should be reviewed to make it more liberal in terms of tariff liberalization and rules of origin and to have simpler customs and verification procedures.

Meanwhile, Indian officials said the government was inclined to only stick to those FTAs that it deems mutually beneficial. India has a trade deficit with most of the countries it has signed FTAs with.

“Very clearly in ASEAN agreements India has got, in many respects, the bad end of the stick, particularly in the field of electronics where we now find a number of products are being routed through the ASEAN economies to India,” said George Paul, CEO of the Manufacturers’ Association for Information Technology.