With Scholars Set to Restart Protests, a Peek Inside the Research Funds Gridlock

Their demands reveal a picture of people trying to wriggle out of a system that, through its various inadvertent flaws, has been exploiting them. 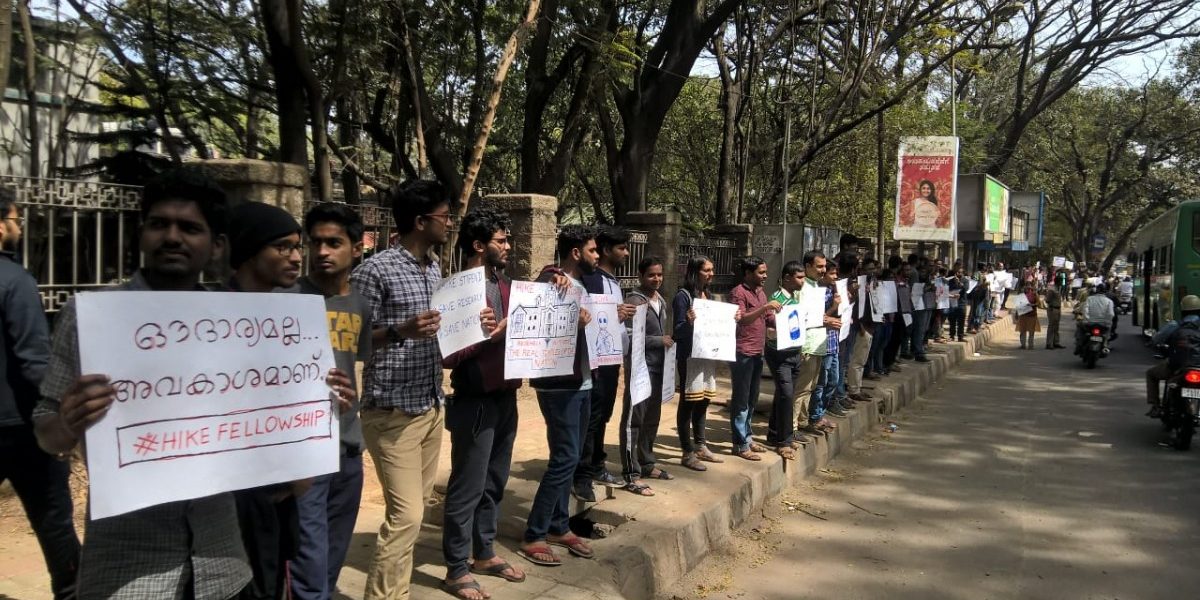 Bengaluru: On January 30, the Union ministry of finance announced a 24-25% hike in the junior (JRF) and senior research fellowships (SRF) amounts effective from January 1, 2019.

The decision had been prompted by a longstanding demand of India’s community of young scholars, who availed these fellowships to support themselves at the start of their careers as scientists. In 2018, their discontent snowballed into widespread protests, with scholars demanding an 80% hike in the JRF/SRF amounts.

Their demands reveal a picture of people trying to wriggle out of a system that, through its various inadvertent flaws, has been exploiting them.

After the protests, officials from the Department of Science and Technology (DST) and the Ministry of Human Resource Development (MHRD), together with K. VijayRaghavan, the principal scientific advisor, intervened, deliberated with the scholars and presented their case to the finance ministry.

But because of the large difference between the ask and what has been given, scholars have confirmed that the protests will continue. In fact, on February 2, many of them will gather at AIIMS, New Delhi, for a stock-taking exercise and to plan their next steps.

Also read: Why the PM’s New Research Fellowship Scheme Is an Utter Disaster

Time is also of the essence, as the scholars are looking for a speedy resolution. However, VijayRaghavan noted, “There are many fellowships, many agencies, and the bottlenecks are there from the laboratory, the institution to the agencies and back.”

According to the DST, the 24-25% hike will benefit 60,000 fellows, and incur an additional expense of Rs 1,500 crore. In this milieu, VijayRaghavan believes that effecting yet another one-time hike and keeping the students waiting for four more years would not solve the problem.

Most people agree that perhaps the worst part issue in all of this is that the scholars don’t receive fellowships that have already been sanctioned on time. VijayRaghavan said that the DST is working on installing a “mechanism” that will ensure the JRF/SRF emoluments are disbursed on time. With this in place, he added, the 24-25% hike “is better seen as the base of a ramp”.

As heartening as this is, scholars are wary because neither this mechanism nor the committee that will oversee it were mentioned in the official memo they received from the DST announcing the hike. And because verbal assurances have yielded subpar – from their point of view – results thus far, they’re less inclined to hope until a formal decision has been made.

A PhD student (who requested anonymity) added that young scientists funded by the Centre should simply be brought under the Pay Commission instead of pursuing anything else: “That would solve most of our problems.” 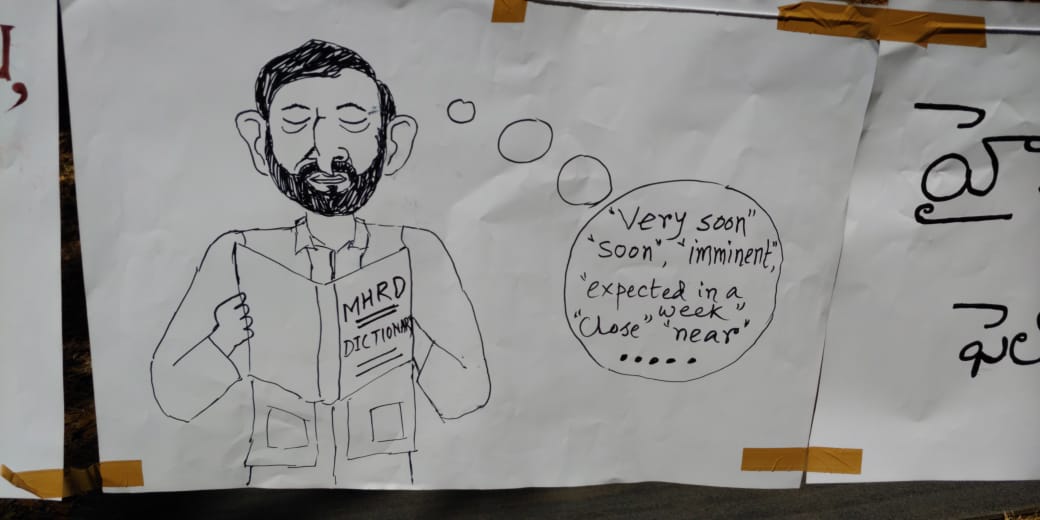 A poster at a protest depicting the MHRD’s promises of a speedy resolution. Credit: IISc Students Council

And not doing so also detracts from the scholars’ attempts to acquire more respect. As another scholar said, “We need to be treated better. If we’re treated as employees instead of students – equivalent to children – in the professional place, it would improve the professionalism.”

Beyond the one-time transactions of the hikes themselves, VijayRaghavan said he and his colleagues are considering a slew of additional incentives that they are hoping will prove to be a win for the research at large as well as a win for individual researchers.

He said they are mulling incentives for teaching (TA) and research assistance (RA). The TA/RA scheme is expected to be similar to the one in most American universities, where PhD students conduct undergraduate classes and assist senior researchers, both against an offset in their fees.

But another PhD scholar said that TA schemes already exist in some places, and the problem was different. “The institutes try their best to get as much job done as possible by paying less. The TA amount we receive is Rs 100 per hour and for a maximum of 120 hours.”

And even when the hours worked increase, “the amounts don’t,” and there is no way to complain when this happens.

What’s a paper worth?

Officials are also considering a ‘rewards for publication’ scheme, the contours of which are less clear. VijayRaghavan said, “The goal is to gently nudge a turn towards quality, not quantity, driven by the student also taking the initiative.”

A parallel scheme is already at work in China, where, according to many observers, it has reaped great rewards for the country’s institutions and for their international ranking. But it has also raised grave doubts about how it could be damaging the country’s research ethos.

In the early 1990s, Nanjing University began rewarding its researchers for publishing papers in certain journals. By the late 1990s, it was the top Chinese university by number of papers published in journals indexed in the Web of Science database. This in turn increased the university’s ranking and encouraged other universities to follow suit. At the time, a higher ranking meant more funds from the government.

Exactly how much a scientist received for each paper wasn’t clear until 2017. Then, a group of Chinese and American researchers revealed that scientists publishing in prestigious titles like Nature and Science earned over $43,000 – or Rs 30.7 lakh – per paper.

This raises many questions about how a similar scheme in India could work without damaging the publishing culture. It would also require guarding against a variety of threats that India’s academic setup will need to be ‘upgraded’ to handle.

For example, an already prevalent obsession with publishing in ‘prestigious’ journals often prompts evaluators to devalue studies published in other journals – even if they have equal or greater merit.

Part of the reason this happens is that a journal’s prestige is used as a proxy for the quality of research published in it. Such proxies are necessary because evaluators either don’t have the time to judge each paper on its own or don’t want to. So a new reward system that asks for more of their time might not work.

Gautam Menon, a computational biologist at the Institute of Mathematical Sciences (IMSc), Chennai, said that if the Chinese model is anything to go by, “it’s a bad idea”.

The scheme “introduces an incentive that favours certain types of work over others, especially in ‘flavour-of-the-moment’ areas where publishing is easier since journals always want to increase their impact factors; it increases the incentive to cheat, especially if the monetary rewards are substantial,” he added.

And “it reduces the value of ‘intellectual scholarship’, if the only way one assumes such scholarship is whether the scientist has been appropriately rewarded in this manner.”

Also read: The ‘March for Science’ Should Ask for Structural Reforms, Not Just Money

Its ultimate effect would be to “downgrade long, scholarly publications in society journals in favour of the more magazine-type articles in Science, Nature, etc.”

VijayRaghavan acknowledged the idea is “double-edged” for all these reasons. “So steps have to be taken to maximise the positive and minimise the negatives. If this is not possible, it may be wiser not to do this at all.”

“Rewards should be part of the grant system,” said Rahul Siddharthan, Menon’s colleague at IMSc, “and not a reward after the fact. For scientists, good research is its own reward. Recognise it by more generous and flexible funding.”

Generous, flexible funding – that’s where all conversations on these topics stop, almost as if a lot of what’s ailing India’s research community is because too many people have been crammed into a small fiscal space. And in turn this has localised prestige, resources and attention in awkward places.

As an alternative, Menon suggests increasing the “number of high-risk, high-reward proposals, ensuring they are funded fast, and ensuring they are publicised.” Together with fewer constraints on how that money is spent and advertising them as ‘prestigious’, such a scheme could be a more workable “alternative” to ‘rewards for publication’.

This could also help tackle the anti-basic-science bias many scholars are starting to see in the government’s actions and ministers’ speeches, and also beat back divisive schemes like the Prime Minister’s Research Fellowship.

In all of this, one goal has been achieved. The conversations that have to happen if the scholars are to be treated better are finally happening now, thanks to greater – but still insufficient – government participation. It is only regrettable that the trigger had to be distress.