By ignoring the geometric characteristics of links and nodes, networks theorists might have been missing out on important features that determine why some networks take the forms they do. 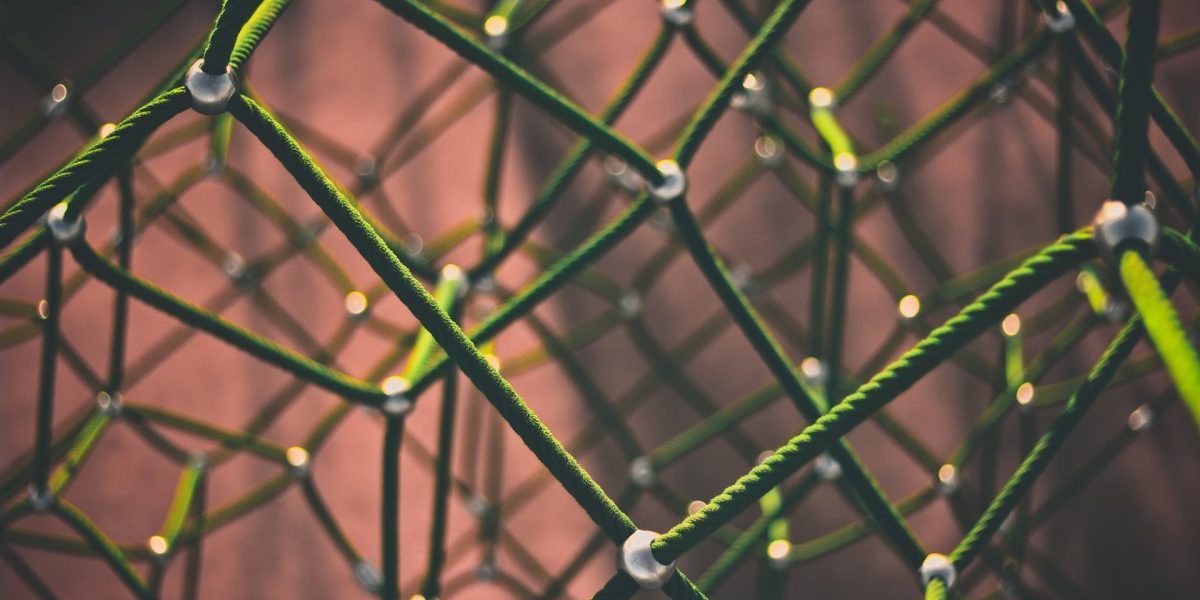 At first glance, this tweet appears to state something obvious:

The actual space occupied by the links and nodes of a physical network, can profoundly influence its three-dimensional architecture, according to a new theoretical framework published in Nature. https://t.co/rzsYZJK3I6 pic.twitter.com/quqTTLU7Sz

Of course the three-dimensional arrangement of links and nodes, and the space they occupy, influences the ultimate form of the network. But it doesn’t capture a pivotal detail in the paper: the scientists who authored it aren’t talking about the length of the links but the girth. The girth appears to have a nontrivial impact on the network to the extent that, if you discounted it, the network would look and behave very differently.

In fact, this paper presents some interesting consequences of link thickness that can’t be intuited from the first principles.

One of the paper’s authors is Albert-László Barabási, one of the world’s foremost network theorists. The other two – Soodabeh Milanlouei and Nima Dehmamy – are students in his lab in Northeastern University, Boston.

Nodes, links and other things

Scientists study networks by organising their internal components as nodes and links. In the example of a triangle, there are three nodes – a.k.a. vertices – and three links – a.k.a. sides. In a tetrahedral network, there are four nodes and six links. Using this simple classification scheme, scientists have found that certain things about a network can be explained only by analysing it in terms of its connections, not by its overall geometry.

As a result, network theory looks at networks using some parameters that don’t exist in the study of other systems. These include things like the number of connections at a node, network centrality, link betweenness, etc. And because the geometric properties are no longer of interest, network theorists assume that the nodes are infinitesimally small and the links are one-dimensional.

Also read: Scientists Shouldn’t Always Look for Utility in the Beauty of Shapes

For example, a 2013 study used network analysis to determine the performance of batsmen who played in the Ashes that year. Satyam Mukherjee, the study’s author and a postdoctoral fellow at Northwestern University, Illinois, built a network where each node was a batsman and each link was a partnership between two batsmen. The link length scaled according to the number of runs they scored together.

In this setup, Mukherjee found that the in-strength parameter denoted a player’s contributions in partnerships; closeness, their ability to play in different positions in the batting lineup; and centrality, the degree of their involvement in partnerships. The Google PageRank algorithm could be used to determine each player’s overall importance.

Mukherjee found the following English players scored the highest on each count (England won the Ashes 3-0 that year):

However, the current paper argues that by ignoring the geometric characteristics of links and nodes, theorists might have been missing out on important features that determine why networks take the forms they do. This may not apply to analysing cricketing statistics but it could – as the paper states – to “neurons in the brain, three-dimensional integrated circuits and underground hyphal networks”. In all these networks, “the nodes and links are physical objects that cannot intersect or overlap with each other.”

The one geometric characteristic found to have a defining influence on the ways in which the network was and wasn’t allowed to grow was the link’s width.

Using modelling and simulations, the scientists found that there was a link thickness threshold. Below the threshold – with small link width, called the weakly interacting regime – the network was able to keep links from crossing each other by small rearrangements that didn’t affect its overall form. Above the threshold, in the strongly interacting regime, the link thickness began to have an effect on link length and curvature, and the links also became more closely packed together.

This is fascinating in two ways.

First: The study shows that the way the network grows depends not just on which nodes it wants to connect but also on how they’re connected. This could mean, for example, that network theorists will have to factor in the physical properties of materials involved in link-building to fully understand the network itself.

Second: Link thickness also affects the space between links, with links placed closer to each other as they become thicker. As a result, networks in the strongly interacting regime will be harder to construct using 3D-printing than those in the weakly interacting regime, in which links and nodes are more clearly separated.

Where does the threshold itself lie? It’s not a single, fixed link-width value such that the network properties on either side of it are markedly different. Instead, it’s more like a transition that occurs across a predictable range of values. In general terms, the threshold is the zone where the total volume occupied by the links approaches the total volume occupied by the nodes. To quote from the paper (emphasis added):

We determine the origin of the transition in the geometry of the networks by estimating the transition point rLc. When the links are much thinner than the node repulsion range rN, the layout is dominated by the repulsive forces between the nodes, which together occupy the volume VN = 4√2NrN3/3. When the volume occupied by the links becomes comparable to VN, the layout must change to accommodate the links. This change induces the transition from the weakly interacting regime to the strongly interacting regime.

The interestingness parade from this study has yet another float. The scientists found that a network behaved more like a solid in the weakly interacting regime and like a gel in the strongly interacting one. This isn’t immediately evident because thicker links usually suggest higher robustness and structural rigidity. However, because they also influence link length and curvature, the network responds differently to external (physical) forces compared to networks with more slender, straighter links.

Specifically, the corresponding stress response was measured using the Cauchy stress tensor – a matrix of nine values used to calculate the stress at a point in three dimensional space. In the weakly interacting regime, the stress response was dominated by node-node and link-link interactions, and the network prevented the stress due to the external force from spreading evenly in all directions. This is a feature of solid materials. 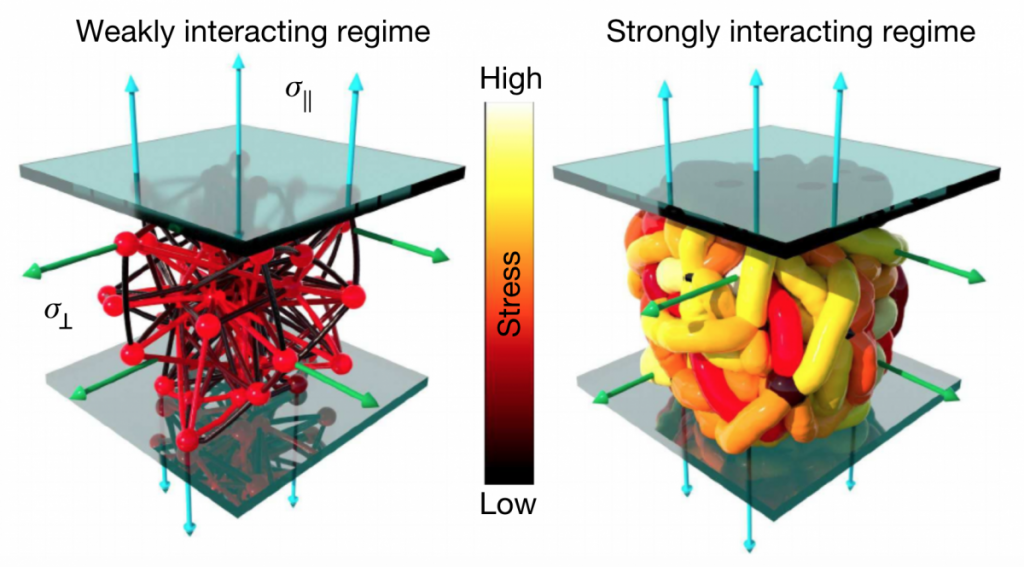 Build-up of tensile stress in nodes and links when the network is compressed between two walls. Arrows indicate tensile stress components: cyan, parallel to the direction of compression; green, perpendicular to the direction of compression. In the weakly interacting regime, the stress is concentrated in the nodes; in the strongly interacting regime, in the links. Caption and source: https://doi.org/10.1038/s41586-018-0726-6

Similarly, in the strongly interacting regime, the stress spreads more uniformly through the network because the volume is dominated by links. So the stress response is controlled chiefly by the elastic properties of individual links and by link-link interactions, mimicking those of gels.

In sum, as a network transitions from the strongly interacting to the weakly interacting regimes, the link length begins to increase faster, links become more curved, and the network begins to behave more like a gel even as it becomes less amenable to 3D-printing.