What's the Taj Mahal's Actual Colour? ASI Has a Dubious Way to Find Out

The culture minister has said original photographs of the monument from over a century ago will be used to elucidate the Taj's true colours – except those pictures have a big problem. 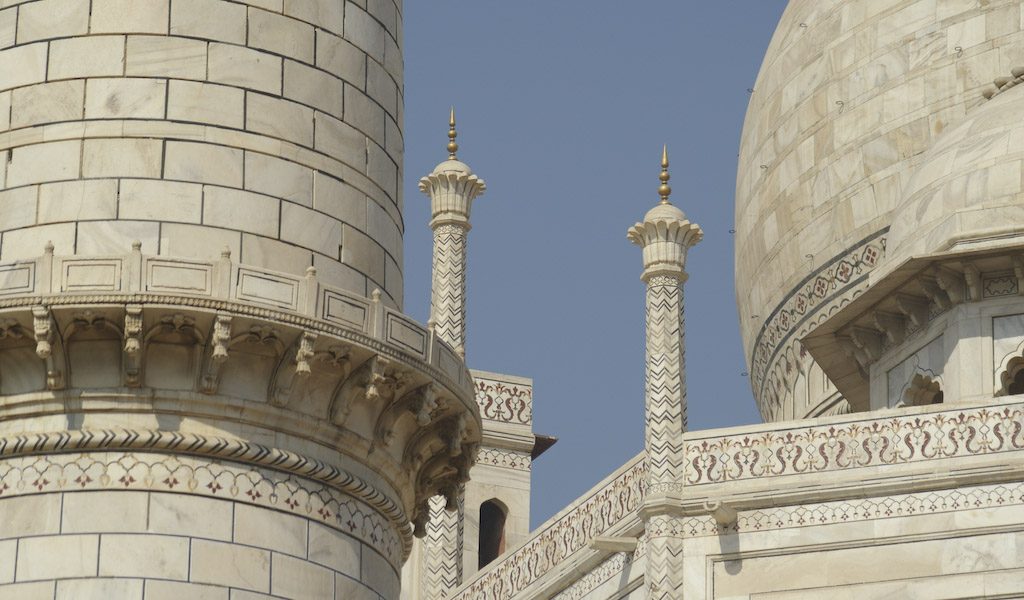 The Taj Mahal up close. Credit: jaymis/Flickr, CC BY 2.0

There are more than 21 variations of the colour white. The Taj Mahal is definitely one of them but which one? Is it milk white? Egg white? Or Navajo white or pearly white?

“It might sound strange to say this of an inanimate building, but every time you see the Taj, it looks different. The colour of its white marble changes throughout the day, from the waxy yellow at dawn through to the pastel blue-gray of a full moon,” a journalist wrote in the Wall Street Journal in 2006.

Even as tourists line up in long queues to glance at the ever-changing moods of the Taj, this 17th-century monument stands tarnishing. Its exterior has turned yellow like the pages of an old novel.

It is crafted entirely from the white Makrana marble, and began losing its sheen in the 1980s after the air started to become more polluted. To restore its lustre, the government has been lathering fuller’s earth – a decolourising agent – on its surface since 2008. But it has done little to prevent or delay the Taj’s paling. In some parts, the marble has developed a black cast; its rear, which faces the Yamuna, has been stained with the droppings of Chironomus calligraphus, an insect that blooms in the polluted river.

In the wake of these changes, the Supreme Court asked the Archaeological Survey of India (ASI) and an apathetic Uttar Pradesh government to make amends earlier this year. Shortly afterwards, Mahesh Sharma, the Union culture and environment minister, said that they would use a ‘scientific method’ to determine the actual colour of the Taj.

“We have original photographs of the monument that are over 100 years old and the same will be compared with pictures taken after cleaning of the monument to measure the changes,” he told the Times of India in June.

However, what has been forgotten is that 90% of the old Taj Mahal images are in black and white. The oldest photograph dates to 1865 while the coloured photographs belong to a much younger period, a senior ASI official confirmed.

Even if we get past the fact that the reference images show the status of the Taj 200 years after it was built, Aditya Arya, chairman and trustee of India Photo Archive Foundation, told The Wire, “It is impossible to gauge colour from black and white photographs.”

At the heart of this problem lies the way black and white cameras work. “The old black and white films could capture only the brightness of objects,” Arya explained. The silver grains in the film are light sensitive and turn different shades of grey to black depending on the intensity of light they are exposed to. The brighter the object, the darker the exposed parts of the film – and this irrespective of its colour.

“So the distinct colour of the Makrana marble would not have been captured in any of the black and white pictures,” Arya said.

The Times of India report also says Sharma and his team are going to use colour stereoscopy. This is a Victorian-era technique that can enhance the perception of depth in images. It is based on the phenomenon of binocular vision, which explains how animals use two eyes to conceive depth of vision.

Both our eyes view objects from a few centimetres apart. The brain combines the two points of view into a single image with a sense of depth.

A stereoscope works on the same principle. It lays two images captured with a slight horizontal displacement onto one another using a lens. When you peer into the device, you see a 3D replica of the object in the picture. In that sense, the stereoscope was the first primitive 3D imaging device.

After Kodak colour films were introduced about three decades ago, the stereoscope even became a means of virtual tourism. People in Europe could peek into a stereoscope and find themselves transplanted into cherry fields in Japan. The technology then trickled down to children’s’ toys. A 1990s kid would recollect peering at 3D images of cartoons by glueing their eyes to a binocular-like object. With the click of a button, the scene would change to the next image on the reel but the effect would remain, every image solid and real.

Colour stereography predates this era. It is an old and discarded way of producing colour photographs using a black and white camera. In one version, developed by Frederic Eugene Ives, the subject is clicked from two different spots roughly 7 cm apart. But instead of normal lighting, the images are made under a red light, a green and a blue light separately. When the six pictures are combined in a special instrument called the Kromskop (also designed by Ives), the result is a coloured replica of the black and white picture.

“This is because these three primary colours give rise to the entire range of hues that we see,” G.V. Pavan Kumar, associate professor of physics at the Indian Institute of Science Education and Research, Pune, told The Wire.

If there are black and white transparencies – a.k.a. photographs printed on plastic or glass – of the Taj captured with red, blue and green filters, they could be placed in a Kromskop to produce a full colour stereoscopic image of the monument. In the sense that the sky would appear blue, the trees would seem green and the Taj, a particular shade of white. “But it will lead to major errors in the reproduction of colours,” Kumar said.

Using colour photographs will be no good either because the early variant of the technology was based on dyes. “Most dyes are sensitive to oxygen, moisture and ultraviolet rays,” Arpan Mukherjee, an associate professor of printmaking at the Visva Bharati University, Santiniketan, told The Wire. “So they will not be an ideal reference.”

This meandering path for assessing colour comes with a slew of problems. Images are often at the mercy of a photographer’s subjective judgement. “It is important to know whether the reference image was taken for documenting the monument or if it was shot to highlight its aesthetic appeal,” according to Mukherjee.

But Arya says that even if we knew all these variables, it will be difficult to rule out colour bias. When documenting important works of history, most photographers use standard-issue grayscale strips and colour strips to ensure exact that the object’s colours are depicted exactly in the photograph. This minimises both printer’s bias and the device bias in colour reproduction. There is no similar standard for black and white photography.

So it is unclear why the ASI has hedged its bet on photography to decipher the Taj’s true colours – especially when they could also study the marble used to build the Taj.

While photographs only serve as a proxy to what-could-have-been-the-colour of the monument, the marble itself has all the required colour information.

When the marble surface is eroded by acid rain, the latter creates tiny microscopic sites where soot, rust, algae and other discolouring agents can gain a foothold, Sambuddha Misra, a geochemist at the Indian Institute of Science, Bengaluru, explained. Yet the rock below the discoloured coating is safe. “Etching the surface with a weak acid would be the easiest way to determine the true colour of the marble,” Mishra told The Wire. Otherwise, he advises “cracking open a small piece of rock”.

All the marble used to build the Taj came from a site in Rajasthan called Makrana. It is conceivable that unexposed marble pieces from that region can be used to compare.

When asked why the ASI is not considering this way out, a senior official who wished to remain unnamed said it would be unfair to compare unexposed marble pieces with the stone of the Taj, which has undergone natural weathering over the years.

But if the target is to determine the actual colour of the Taj,  using the unexposed marble pieces as a reference appears more objective. It is certainly more tenable than using black and white pictures that lack colour information.

In light of the technological advancements that have ousted colour stereography, Arya asks, as if rebutting Sharma’s assertion, “Using pictures to determine colours – is that even scientific?”