What Does the 'Statue of Unity' Have That Scientists and Research Don't?

In the statue’s aftermath, two students of science hope the political expediency that erected it will also be spent to revive India’s R&D prospects, now that they know what it is capable of. 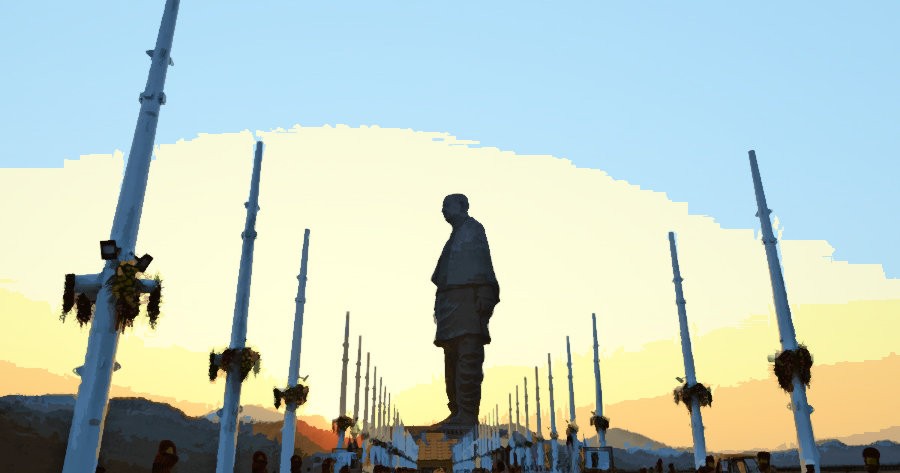 The Statue of Unity on Sadhu Bet island on the Narmada river. Photo: Reuters (edited by The Wire)

The Statue of Unity recently unveiled in Gujarat is 182 m tall. Seen another way, it might as well be 182 m away from more pressing issues that could have better used the Rs 2,989 crore used to build it.

For example, budget cuts have kept the Indian education system in stasis even as the state harbours bigger expectations of the national research output. Researchers have almost constantly been asked “What have you given back to society?”

Lawmakers often argue against funding scientific research by dismissing subjects that don’t yield instant gratification. Studying the properties of semiconductors, the fluorescence of a dye molecule or calculating black-hole phase transitions in 13.5 dimensions don’t make for groundbreaking contributions that the public will instantly appreciate. The result: they are branded bad investments.

‘Direct and instantly recognisable’ has become state authorities’ reason of choice to justify the withdrawal of research funds.

In the same vein, let’s consider whether the 182-m-tall statue is a good investment. Its only apparent contribution seems to be towards tourism. But even if it received as many visitors as the Great Wall of China does in a day (with 85% adults and 15% children), then it will be over three centuries before its capital costs are recouped. The statue also doesn’t provide instant gratification to society, in much the same way fundamental research allegedly fails to.

If one is a bad investment, shouldn’t the other be, too?

Sadly, we all know what the answer is, as well as the excuse: political expediency. However, India’s scientific community – not just the scientists at the top but also technicians, lab assistants, graduate and postgraduate students – teeters today on the brink of a crash because of what it has had to endure due to such expediency.

The Government of India allocates only 0.6-0.7% of its GDP towards R&D. From civil engineering to fundamental science, India has been pushing the boundaries of knowledge for many centuries but the Narendra Modi government, happy to bank on scientific and technological accomplishments, is yet to fund researchers with the commensurate seriousness.

Mangalyaan makes for an illustrative example. India became the first country to successfully pull off a Mars-orbiter mission in its first attempt. The Indian Space Research Organisation achieved this feat on a shoestring budget (relative to other interplanetary missions of comparable scope). This wasn’t an option but a conscious choice given the constraints within which research in India happens. The government allocates about Rs 1.2 lakh crore a year for all scientific research – about 88% of NASA’s annual budget.

Poor funding for research in the basic sciences and in higher education is directly affecting scholars around the country. Students engaged in research, even at the IITs, have complained about being stuck between rising fees and diminishing returns from scholarships, grants, etc.

The flagship Innovation in Science Pursuit for Inspired Research (INSPIRE) scholarship, which is hardly credited on time and only covers scholars’ mess fees, is another cause for concern. There was once a rule that all IISER and NISER students would automatically qualify for INSPIRE if they maintained CGPAs above 6. However, the promises were soon forgotten, funds dwindled and it was soon announced that the cut-off would be one point higher. Even then, only some of the better students would receive it, not all.

Junior research fellowships, which recently received some attention in the media, needs to be upgraded well and fast. The fellowship amounts might provide some financial security to young researchers but it’s a drop in the bucket for those who have to support a family with it as well.

Interviews for the Shyama Prasad Mukherjee Fellowships have been pending for two years. Those scholars who qualified for it three years ago are yet to receive their certificates and increased contingency amounts.

In fact, 60% of scholars around the country don’t have official fellowships and those who do have to work full-time to offset irregular disbursements.

The more government action is delayed beyond this point, the more indifferent it will seem scholars’ eminently reasonable demands.

Low funding has also affected teachers in various science departments across the country. A few months ago, over 500 faculty-members at IIT Bombay received an email from the assistant registrar that, thanks to a funds shortage and MHRD grants not having been released on time for July-September 2018, their salaries wouldn’t be paid on time.

The Statue of Unity may symbolise national pride, and perhaps pay tribute to Sardar Vallabhai Patel’s efforts to unite a once-fragmented Indian state. At the same time, the money allocated for the statue’s construction could have been split between the statue and to fund research. In doing so, the Centre could have paid more meaningful tribute to both Patel and the idea of India, and reaped benefits far into the future.

Then again, what’s done is done. In the statue’s aftermath, we hope the political expediency that erected it will also be spent to revive India’s R&D prospects, now that we know what it is capable of. Keeping the government’s expression of nationalism aside, we simply ask that legitimate research needs find meaningful expression in its R&D policies.

Debajyoti Sengupta is an MSc student of physics in Calcutta University. Dibya Sankar Das is a research scholar in the condensed matter physics department, Tata Institute of Fundamental Research, Mumbai.