What Does the New IPCC Report on Land Use Mean for Indians?

Near-term actions for India should focus on reducing land degradation, desertification, habitat and biodiversity loss while not jeopardising food, energy and water security. 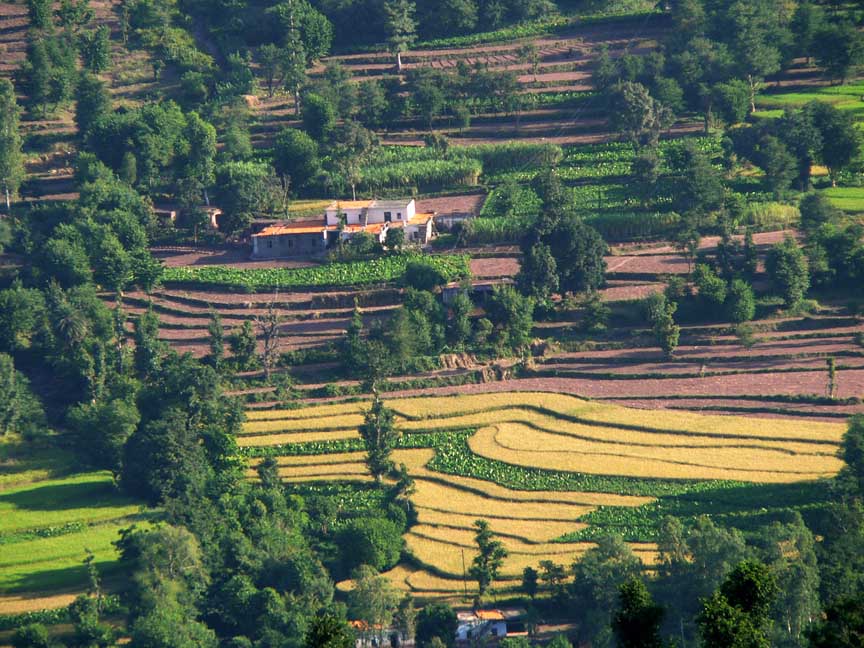 Terrace farming in Kasauli in the Shivalik hills, Himachal Pradesh. The yellow on the roof of the building is maize drying. Credit: kkoshy/Flickr, CC BY 2.0

The Intergovernmental Panel on Climate Change released a report on August 8 entitled ‘People, Land and Climate in a Warming World’. It reviews current knowledge and research to explain how humankind is affecting land on Earth: directly, through land use and change; and indirectly, by releasing greenhouse gases and feeding global heating and extreme weather events. For those about to fret or roll their eyes saying, “Here we go again with the bad news”: the report also focuses on how we could respond to reduce our own impact.

Specifically, the report talks about what we can do in the near-term to reduce the adverse consequences of the way we use land and how we can adapt to changes as a result of how we’re using that land. The following is an attempt to unpack the report’s most salient findings.

In the IPCC Special Report on Land Use and Climate Change, the UN lists the ugly outcomes of human activities followed by suggestions about what can be done to navigate towards good outcomes. As such, the report makes for a nice follow-up to the shift that happened from the top-down process of the Kyoto Protocol, where recommendations were set forth for all countries, to the more democratic approach in the Paris Agreement, where countries voluntarily committed to carbon reduction based on their own goals and capabilities.

A comprehensive climate assessment report, called Assessment Report 6 and authored by the IPCC, is due in 2021. It has followed earlier protocols of mapping greenhouse gas (GHG) emissions for the coming decades based on a series of assumptions about population, economic growth, technologies, energy demand, etc.

In a novel approach, the IPCC has designed a set of shared socioeconomic pathways (SSP) to account for various options people may choose for their economic growth. The representative concentration pathways (RCPs) focus on levels of additional greenhouse gas forcing or heat-trapping that lead to different levels of global heating. Socioeconomic choices obviously affect emission levels and vice versa. The SSPs focus on sustainability, resource demands and other socioeconomic options in the coming decades.

The combination of RCPs and SSPs offer more holistic future projections where humans are dealt with as an external forcing on Earth’s climate system, at par with the Sun. This approach offers early insights to recognise that certain RCP and SSP combinations are simply not tenable. For example, a high resource, high consumption SSP will eliminate the most benign RCP as an option.

The report’s principal message is that humans currently appropriate a quarter to a third of Earth’s potential primary productivity, which is the amount of photosynthesis performed by all plants. This is accomplished by negatively affecting forests, soils, wetlands, peatlands, grasslands, mangroves, etc. This results not only in more GHG emissions, heatwaves, extreme events and dust storms but also desertification, dryland expansion, and water and air quality degradation, which then brings down labour hours and GDP.

The good news is that sustainable land management options in the near- and far-term offer pathways to stay true to the 2º C warming target, which is the least damaging option on the table.

The message for India

It is important for Indians to remember that India is firmly in the so-called global south, which includes poor or developing countries. Most of these countries are in the tropics; India in particular is ensconced in the most climate-vulnerable neighbourhood on Earth.

Land is warming twice as fast as all of Earth’s surface on average thanks to its low heat capacity; this in turn has triggered a rise in the intensity and duration of heat waves, dust storms, extreme rainfall and droughts. Indeed, the global south has suffered the worst dryland expansion, of 1% per year, since 1961.

Land use contribution to GHGs

The IPCC land report uses 1961 as the baseline year to describe how humans have come to dominate the land system. Human impact occurs through agriculture, forestry and other land use (AFOLU).

The rate at which land is being greened by CO2 fertilisation and nitrogen deposition exceeds the rate at which it is being ‘browned’. However, the carbon uptake inherent in the latter decreases as the planet warms and permafrost thaws. Worse, the reckless exploitation of land resources includes a loss of up to 30% – a waste of food with patterns of calorie consumption leading to over two billion people being obese and nearly a billion being undernourished.

Humans have increased cereal and fibre production by about 240% and 162%, respectively, since 1961 thanks to irrigation, expansion and intensification of land use for agriculture and massive application of fertilisers. However, food security has fallen in the global south thanks to population growth, reduced crop yield and pest infestation. On the other hand, the global north – the developed world – has experienced higher yield as well as higher infestation.

In other words, global heating is already creating winners and losers, and the global south is a clear loser. This is not expected to change. The global south also suffers from amplified risk of land-climate interactions due to higher population increase, food demand, urbanisation and technological advances that worsen water withdrawals for irrigation. Higher crop yield is often more than compensated by the downsides.

The report weaves adaptation and mitigation options into the narrative of deleterious effects of human land use. The co-benefits of adaptation and mitigation are detailed in terms of reducing GHG emissions, desertification and soil- and land-degradation while enhancing food security. For the global south, benefits also include advancing sustainable development goals such as reducing poverty and hunger, supplying clean water, providing better healthcare and advancing sustainable consumption practices.

According to one estimate from the report, technology advances aimed at crop and livestock activities combined with dietary changes are estimated to have an emission reduction potential of up to 20 gigatonnes of CO2-equivalent per year by 2050. Reforestation, afforestation, lower deforestation, biochar, agroforestry and bioenergy options are major players in the quest to keep warming below 2º C.

There are three instruments with which to make these changes possible: policies, institutions and governance structures. Land use varies from place to place. So responses to reduce human impact should be based on the local socioeconomics and environmental knowledge.

Then again, these region-specific actions must also synergise with state, national and international responses to ensure sustainable land use and livelihoods with minimum desertification, dryland expansion, and loss of habitats, wetlands, mangroves, etc. India shares resources with its neighbours and can’t become sustainable within its borders without resolving cross-border land use issues.

On the flip side, barriers to implementing policies and actions can be financial, political, cultural and/or educational. A lack of awareness of the benefits of mitigation and adaptation responses as well as tradeoffs between AFOLU may slow or delay sustainable land management. The government can surmount such barriers by stakeholder engagements, local management of resources and paying special attention to marginalised communities.

Near-term actions for India, and the global south, should focus on applying our current knowledge to obvious targets of reducing land degradation, desertification, habitat and biodiversity loss while not jeopardising food, energy and water security. For example, the government’s continued ramping up of renewable sources of energy like solar and wind, with additional resources for wave energy, reduces emissions and improves air and water quality. Bioenergy must be introduced with care considering the conflicts and deforestation associated with palm plantations. Some biofuels also affect grain prices, and in turn meat prices, by siphoning food grains.

We can become less vulnerable to soil erosion and nutrient loss through agroforestry, use of green manure and cover crops, retaining crop residue and organic biomass, reducing tillage and managing grazing to reduce land degradation.

We could also practice integrated food production – where crops, livestock and aquaculture are managed together to reduce waste and water use. Such an approach can also integrate the supply and demand for food, fibre and feed to account for market forces in production management.

Implementing sustainable land-use practices will require incentives and will require institutions, businesses, consumers, policymakers, etc., to cooperate at the national and international levels. We must also empower women – who tend to bear the brunt of the adverse impact of the climate crisis.

Policymakers can enhance our ability to adapt by capacity-building through technology transfers that deal with the impact of climate change, provide financial mechanisms to improve resilience and support the education of women, production of sustainable building materials and, of course, rainwater harvesting.

Digital technologies for monitoring land-use change combined with advances in forecasting extreme weather can be used to support early-warning systems to be used by farmers, healthcare providers, etc.

India is experiencing another monsoon of extremes: parts of Maharashtra have received rain more than 50% in excess of the long-term average whereas much of northwest and central India has been cursed with a deficit of 30%. The average seasonal rains may technically be ‘normal’ but the new normal includes floods and droughts.

With our population and food demand guaranteed to grow for a few decades, India must jumpstart its near-, medium- and long-term actions for sustainable land management to achieve its dream of becoming a global economic giant.

Raghu Murtugudde is a professor of atmospheric and oceanic science and earth system science at the University of Maryland. He is currently a visiting professor at IIT Bombay.